Brought out the die grinder and put a Scotch-Brite wheel on it to smooth the inside of all the lightening holes on the webs of all the vertical stabilizer ribs. Worked great. Prior to this step, I ran the rib flanges over a Scotch-Brite wheel mounted on a bench polisher. Still need to use a fine file to smooth the metal between the rib flanges. There are piles of ribs in the wings … so finding a system that works well now will be beneficial when the wing kit arrives. 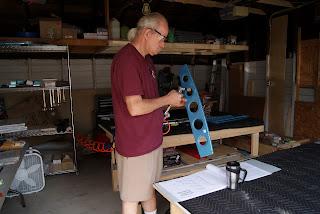 The die grinder with a Scotch-Brite wheel makes short work
of deburring holes in the ribs.

Those experienced will question my leaving the blue protective film on the ribs … not to worry, the film will come off for primer prep and a maroon Scotch-Brite pad will be used as a final smoothing step on all edges as well as scuffing the metal for primer adhesion.
Posted by John at 8:48 PM

DOG Aviation has added a spray paint station to the facility … finished most of the spray box yesterday and put the finishing touches on it today. Should have had it done by now, but had a lazy day on Sunday … found it hard to pull myself away from a book that had a good storyline. 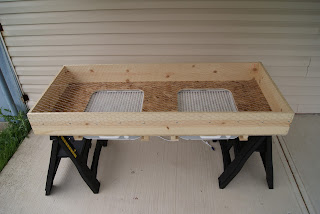 The spray box is 6’ x 30” with wire mesh across the top and has
two box fans that should pull most of the overspray down through
two furnace filters.

The fans are the inexpensive 3 speed fans typically found in discount stores.  I tried to find used fans at Goodwill and Salvation Army stores but it was not to be, so had to opt for new fans. The good thing is when the weather gets hot and humid, at least there will be two fans available to help make the shop bearable. 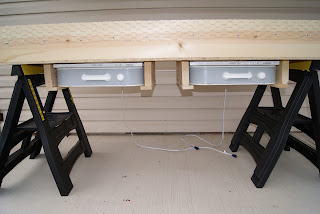 Both fans just slide into slots under the spray box along with the filters.

Return from the future – A few thoughts. Although very pleased with the spray box in general, there is room for improvement. First- the wire mesh should NOT be chicken coop wire because smaller parts want to fall into the box and larger parts tend to snag the wire. Feel a better choice would be to use a wire cloth with a tighter weave. Second- the top should have a frame on a hinge so it can be flipped up for easy access to the inside of the box for clean out … buildup inside the box tends to occasionally fly back up and get on the work. Also if one wanted to go high tech, a few sheets of plastic or cloth could be stuck to the inside of the box and removed after the spray session. Feel this would virtually eliminate buildup from flying back out of the box.

The plan is to use PVC pipe to make a three sided enclosure around the spray box by hanging shower curtains from the PVC pipe. Because room is an issue, the box will sit on saw horses while in use then easily stored on its side when not in use. (Although I will admit the box weighs much more than I thought it would … half inch OBS is total overkill but it was inexpensive.) The PVC frame’s joints will not be glued so the frame can easily be disassembled. However, there will be holes drilled through the PVC joints with pins to keep everything secure while in use.

Have skipped working on the bearing assemblies in order to have more parts ready for primer. Want to make it worthwhile using the HVLP spray gun considering clean up and all the fuss involved for spraying paint. Therefore have moved onto the vertical stabilizer’s rear spar and prepared for match drilling the stiffeners to the rear spar. 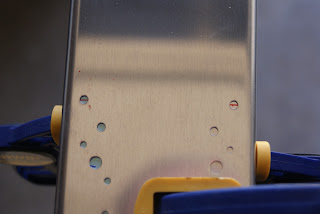 The red lines denote the proper position of the left and right
stiffeners prior to match drilling. 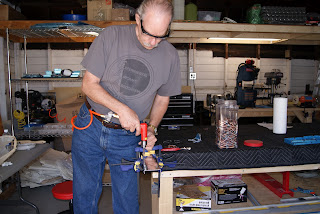 A momentous moment … about to drill the first hole. 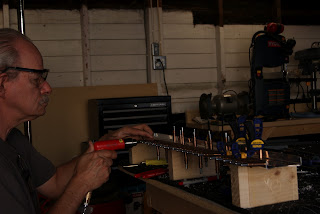 For those who are interested, a cleco is a temporary fastener that is used to hold parts together in alignment. A special pair of pliers are used to squeeze a spring loaded plunger on the cleco. When the pliers are squeezed, tiny fingers protrude from the bottom of the cleco and are inserted into holes in the parts to be held in alignment. Once the pliers are released, the fingers retract and spread pulling the parts together tightly while at the same time keeping the holes perfectly aligned.  There will be times during the RV-12 build when hundreds of cleco’s will be used.

Have decided to epoxy prime all the internal parts so I’m quickly running out of things to do that don’t require primed parts to continue. Over the weekend I plan to make a spray box with an exhaust fan in the bottom of the box.  Think I’ll do something simple, perhaps a box that sits on saw horses …. maybe surrounding that on three sides with a PVC pipe frame and using shower curtains or some such thing as the sides. I will have to give that a little thought.
Posted by John at 9:03 PM

Dog Aviation now has a couple of new fluorescent lights under the shelf so no more shadows at the power tool bench.  Finished the lighting project in the morning then, after a little cleanup and blowing sawdust off aircraft parts, began working on the vertical stabilizer. The band saw made easy work of separating the stamped parts as called out in the plans. 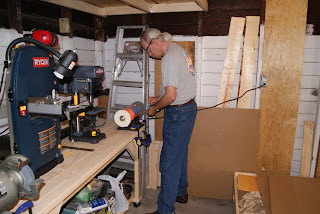 About to use the Scotch-Brite wheel to debur the stamped parts.

Jumped ahead a little in the plans and fluted the vertical stabilizer ribs so more parts will be ready for priming. 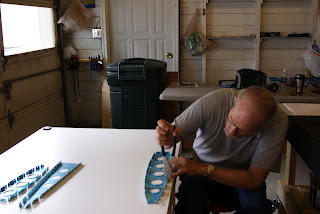 Email ThisBlogThis!Share to TwitterShare to FacebookShare to Pinterest
Labels: Empennage

Standing Up Is No Longer A Headache!

Hard to believe it is almost a month since the last post … but a month well spent.  The removal and lifting of the shelf turned out to be a much larger task than originally planned.  The shelf has finally been raised alleviating the need to cower when at the rear of the assembly area. Also added some outlets and a switch for shop lights under the shelf plus replaced some of the lumber to change the way the shelf is anchored, making the new shelf much sturdier than the old one.

Those that know me well will not be surprised to hear I also got sidetracked and ended up making a seemingly simple project into a much larger retrofit. More on that later. 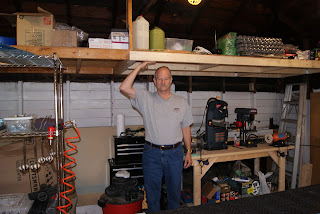 As you can see there is now plenty of room to stand up
straight under the shelving without fear of whacking the
cranium. However, I still  have the tendency to cower
when nearing the general area of the shelf.

A string of portable lighting was purchased in March and when I got into lifting the shelf and had the ladders out thought I would hang it. Much to my surprise, there were not any rafters there! Never really noticed that minor detail … so there really wasn’t any good way to hang the lights and make them easy to move as the project dictates. So I decided to add a few rafters. (That is a fun job to do by yourself). 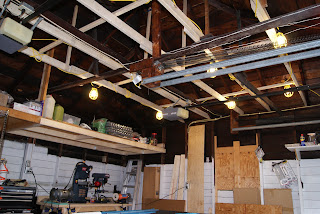 This photo shows all but one row of the portable light string
perched on the new rafters. The rafters will come in handy for
more than just the lighting … should be useful for hanging
wet painted parts from them to dry, using them as a tie off
point, ect. The new outlets are also visible to the left of
the workbench.

Tomorrow morning will finish the electrical by installing two shop lights under the shelf. This will help immensely at the power tool workbench ... standing in front of the bench creates a large shadow over the work area.