Making Of A Carburetor Balancing Fixture


Because it is desirable to have all the cylinders receiving the same amount of fuel and air, it is necessary to “balance” the carburetors. The balancing process is not unique to the Rotax engine, all multi-carbureted engines require balancing. Balancing is typically performed using vacuum gauges, digital meters or even long tubes of water connected to the intake manifolds. The theory being, if both carburetors are adjusted to have the exact same vacuum readings from idle to midrange power, they are both providing the same amount of fuel and air to each bank of cylinders.


As previously mentioned, carburetor balancing can be achieved using various methods, but there is something to be said about a pair of accurate dial gauges. Truth be told, the gauges don’t really need to be accurate they just need to read the same per any given vacuum. By this I mean we are not really interested in the discrete value … so if the actual vacuum reading is 7.5 inches of water but the gauge reads 7.9, for balancing purposes it is not crucial. We just want to know that for a given amount of vacuum both gauges read the same. So when both carburetors are adjusted to generate the SAME AMOUNT of vacuum on both gauges, the intake manifold for each bank of cylinders will be receiving the same fuel/air mixture. 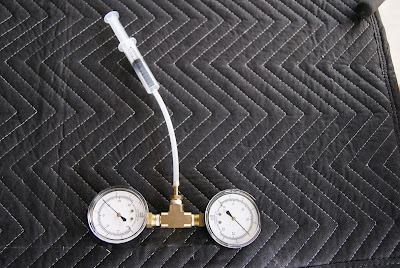 To test that both vacuum gauges tracked each other closely a T and a syringe was used. I was able to vary the vacuum using the syringe and each gauge tracked very closely … the gauge on the right consistently read .25 inches of water low … so that gauge was marked so when balancing the carburetors, I will make sure it reads .25 inches of water lower than the other gauge.


As can be seen in the above photo, both the vacuum gauges the DOG Aviation procurement department purchased were tested using a syringe to make sure they tracked together. The vacuum applied to the two gauges was varied by adjusting the plunger on the syringe in or out. The gauges tracked together very closely but one gauge was a consistent .25 inches of water lower than the other, so it was identified and marked accordingly.


The rig: When attaching gauges directly to the intake manifold, under certain conditions, the needle on the gauges may bounce erratically. This possibly could be eliminated by purchasing much more expensive fluid filled gauges, but will try the less expensive route first. To dampen the needle movement out, an inline valve can be placed before the gauge and adjusted to dampen the erratic needle movements. As such, the test fixture will incorporate a separate valve for each meter.  Because it is desirable for me to be able to balance the carburetors by myself, I decided to make a mounting fixture for the gauges that can be seen from inside the cockpit. The idea is to use the upper cowl hinge as a mounting location for the gauge fixture. To prevent the fixture from flopping around, the fixture will extend to and touch the firewall underneath the hinge and another piece of aluminum will extend above the hinge over the top of the forward fuselage skin to prevent the fixture from flopping aft from the prop blast. 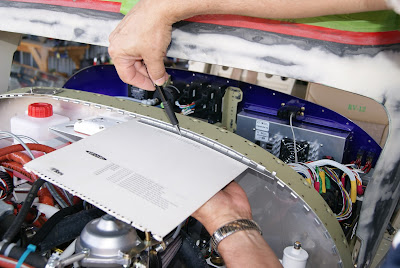 Using a piece of cardboard and a scrap piece of hinge material. The cardboard template was placed on the firewall and marked to denote where the forward edge of the hinge material needs to be located. 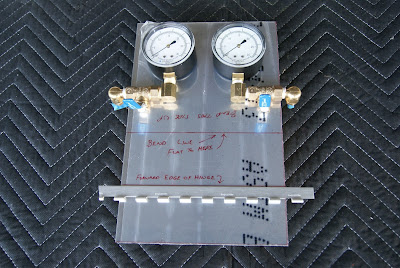 This will be the basic layout for the carburetor balancing fixture.


I was able to locate a metal brake on the field at Castle Aviation and Dean graciously allowed me to use it to make a 90 degree bend on the aluminum for the test fixture. Once back at the hangar, I removed the cover from one of the gauges so mounting holes could be marked and drilled in the fixture. 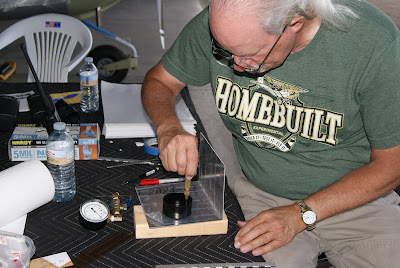 Using the screw holes in the gage’s case for alignment, both mounting holes for each gauge were center punched for drilling.


After drilling the mounting holes for the gauges, the hinge material was cut, drilled and secured to the fixture with Clecos after a slight bend was placed in the metal to conform to the curve of the cowling hinge. With the Clecos still in place, a test fit was made. 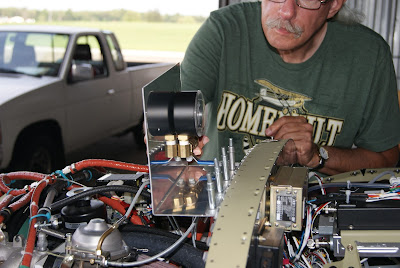 With the test fixture secured by the cowling hinge pin, the position of one of the vacuum gauges was tested. So far so good.


After the above photo was taken, the fixture was marked so some of the excess metal could be cut off. Some excess material was left beyond the gauges to help protect them and followed the curvature of the gages. There was also enough excess material to make an eyelet between the gauges to hang the fixture from when not in use. By the time I finished up cutting and filing, I did not have enough time to prime for a layer of protective paint.


Still need to add a piece of metal that will clear the hinge and extend aft over the upper forward fuselage skin to prevent the prop blast from flipping the fixture aft. As an additional thought, may also consider mounting an additional hinge to allow side mounting the fixture … this would allow the fixture to face me while standing beside the engine and make adjustments as it runs … while another pilot is inside the cockpit at the controls This would be handy and allow adjustments to be made on a running engine without starting/stopping the engine and needing to climb in and out of the cockpit a whole bunch of times.
Posted by John at 10:57 AM