Have finally gotten around to continuing work on the modified “Bender baffle” and during a few small work sessions, worked out the final positioning for the bushings ... this was after changing my mind a few times in an effort to maximize the full open position for the baffle. In the previous post, there is a photo of a box representing the size of the voltage regulator tapped onto to the cardboard baffle. This was used to see if there is enough clearance to mount the regulator on the baffle and clear the cowl throughout the baffle’s range of motion. 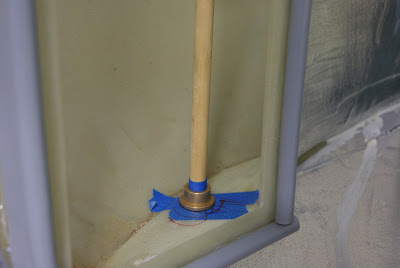 As can be seen, the bushing location has changed several times … this is the final location.

When playing around with the baffle’s position decided to move the baffle as far forward as practical so made another cardboard template because the curve on the cowl was just a little different at the new location. 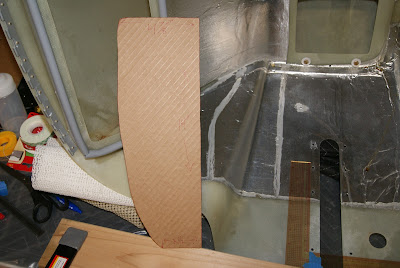 New cardboard baffle made with a slightly different curve to match the new mounting location. 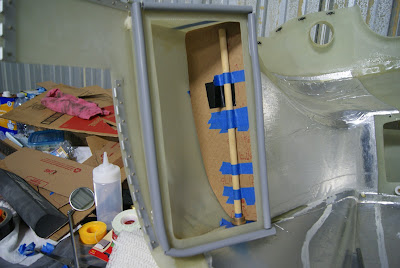 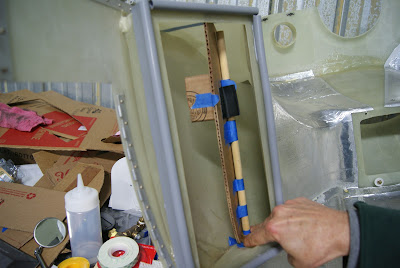 
Now that the lower pivot point has been determined, it is time to punch a hole for the bushing. The position for the bushing was traced onto the blue masking tape. To find the center of the hole for drilling, a 1/2" pilot point drill bit was slipped into the bushing and spun a little to create a center point mark that was used to begin the drilling process. A tiny lead hole was drilled followed by progressively larger bits until a step drill could be used. Because of the limited room under the air duct due to the curve of the cowl, the step drill could not be used to go directly to the final size so I stopped at 1/2". Next a Dremel tool with a sanding drum was used to take the hole close to the final size followed by a little hand sanding so a nice tight bushing fit could be achieved. 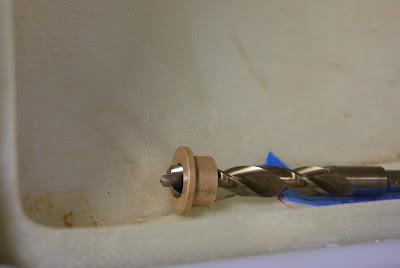 A 1/2" pilot point drill bit was used to find the center point for drilling the mounting hole for the bushing. 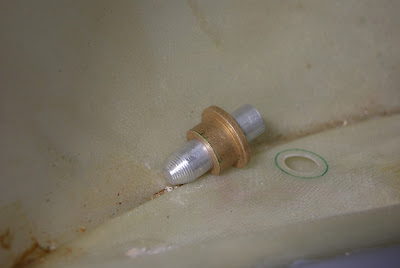 After drilling the 1/2"  hole for the bushing, a scrap piece of 1/2" rod was placed in the bushing to hold position so the bushing’s diameter could be traced so the final 5/8" hole could be made. 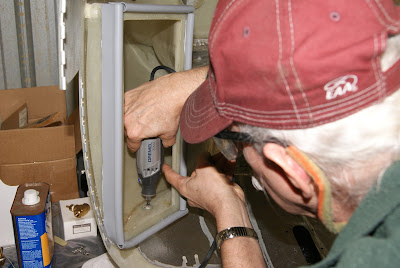 Using a Dremel tool outfitted with a small sanding drum to get close to final hole size of 5/8" for the bushing. 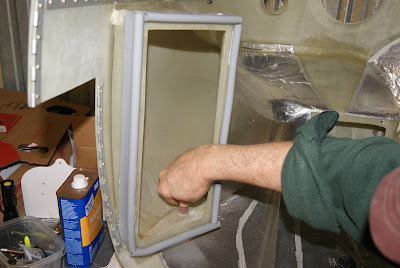 Tweaking the hole by hand to achieve a nice tight bushing fit.


Because the air duct’s fiberglass is fairly thin, decided it would be best to add a doubler plate to help support the added mass of the voltage regulator … so cut a piece of .032 aluminum and drilled a 5/8" hole in it for the bushing to seat into. I came to this conclusion while trying to mark the upper bushing location and discovered I could not get the exact same location twice. This was caused, as I later discovered, by pushing down on the bushing to prevent it from moving  while attempting to mark the upper bushing location. By pressing down on the lower bushing, it caused the fiberglass air duct to flex a little .... a little flex at the lower bushing end was creating a lot of movement 14" away at the other end of the dowel rod. 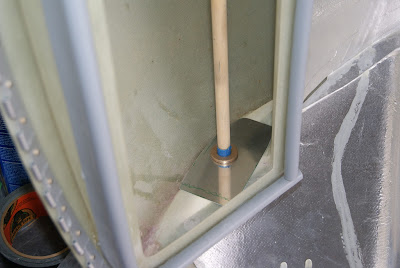 The .032 aluminum doubler plate cut and ready for final instillation this should eliminate the flex and provide good support for the bushing.

Was planning on just riveting the doubler plate onto the air duct, but finally decided it would be best to bond it onto the air duct with a mixture of resin and flox so it would be really solid without any flex. The bottom of the doubler was sanded to scuff it up a bit along with the fiberglass it will mate onto ...then rivet holes were drilled. To prevent the fiberglass from being stressed while riveting, some #4 brass washers were procured to slip onto the rivet so the shop head could form on the washer as opposed to crushing the fiberglass. 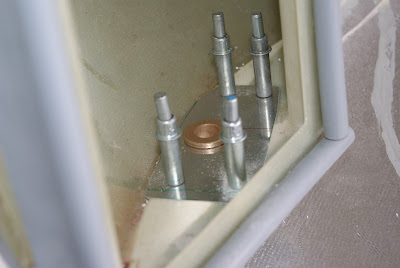 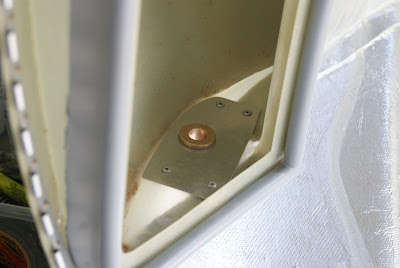 Completed lower bushing instillation. A thin coating of flox is bonding the doubler to the air duct. Not in the photo ... small #4 brass washers were slipped onto the shafts of the rivets on the underside of the air duct so the shop heads would form on the washers as opposed to crushing the thin fiberglass.


Now need to complete the same operation for the upper bushing.  After the flox mixture cures, the upper bearing location will be marked and drilled.
Posted by John at 8:27 PM