Finally the “Bender Baffle modification and voltage regulator relocation onto the “Bender Baffle” is finally completed! Seems as though I have been turning this project into a career. Have not started the engine yet due to weather and performing some maintenance items such as changing the oil and filter, cleaning the gascolator and draining the fuel tank to get rid of all of the winter blended fuel so it can be replaced with the summer blend. If there are any issues with the regulator, I’ll return from the future and edit this post accordingly.


Fellow builders take note: Not to get off onto a tangent, but there is a very important safety point to be made here. The regulatory Gods have deemed it necessary to mandate auto fuels used in most areas of the USA have two formulations … a summer blend and a winter blend. The aspect of the two blends that affects RV-12 pilots the most is … winter blend auto fuel is formulated to vaporize easier in cold weather than the summer blend. The issue that affects us pilots using auto fuel in the Rotax 912 is that of vapor lock … in that, using a winter blend of auto fuel on warmer spring and summer days can and often times WILL lead to a situation where there is vapor lock. This can happen during takeoff and even while flying with increases in altitude because the reduction of air pressure allows the warmed winter fuel blend fuel to get to its vapor point. The best advice …. if you know you have a winter blend fuel left in the tank and are flying on days with summer temperatures, just drain the fuel and replace it with a summer blend if available. If the summer blend has not come out yet, it has been reported using at least a 30% blend of aviation 100LL will raise the vapor point of the auto fuel enough as to mitigate the chances of having a vapor lock issue.


To iron out the issues created by using stiffer wire, a mockup harness was made from 12 gauge stranded house wiring (which is even stiffer than the Tefzel wires) so the range of motion and wire flex could be evaluated. The areas where the baffle swings were defined and marked in red and the open area available for mounting a wiring grommet was marked in green. A couple of hole locations were played with but it quickly became apparent having a hole close to the baffle shaft bushing was the best location. During the testing, because of the high mounting location for the regulator, it was also discovered the wiring will for sure require a loop to establish enough free wire movement to accommodate the baffles range of motion yet keep the wire movement at the grommet to a minimum. The plan is to move forward and use the already drilled mounting holes for the regulator and but keep a close eye on the wires. If doing it again from scratch with the F-4118 regulator or the Ducati regulator in mind, the regulator would have been mounted much lower on the baffle plate which may also eliminate the need for a loop in the stiffer Tefzel wires. Regardless, my advice to fellow builders considering this modification would be to mount the regulator lower on the baffle plate so there is more flex room above the regulator for the wires. 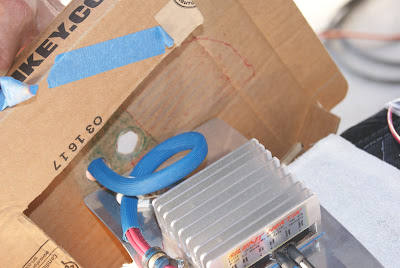 A trial fit of the regulator on the cardboard mockup to see how the wires act as the baffle plate is rotated so the placement for a wiring grommet could be located. The pie shaped wedge marked in green is the area where a wire grommet can be located. The vacant hole closest to the baffle shaft proved to be the better hole location for the wire grommet and generated the least amount wire movement in and out of the grommet. 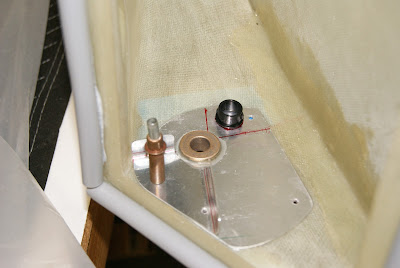 Based on the cardboard mock-up, the wire grommet will need to be installed in the general area where it is sitting in this photo.


After the hole for the wire grommet was drilled and wire grommet installed, work began on installing the regulator onto the baffle plate. The regulator was mounted so the terminals face downward ... the thought being if there is a point in time when the regulator gets wet, water won’t sit in the connector. A connector housing and associated spade connectors (Silent Hektik part number F-4116) were ordered from Silent Hektik along with the F-4118 regulator. The wire used for wiring the spade connector pins was 12 gauge Tefzel except for the wire on the “C” terminal of the regulator … which received an 18 gauge wire which is way overkill size wise, but wanted the extra strength the 18 gauge offers since there will be some wire flex necessary when the baffle nears full closed.. The wires were placed in blue Taylor 2586 thermal protective sleeving which is rated to 1200 degrees so when the wire harness touches the warm regulator during a fully closed baffle condition, the wires should be nicely protected. 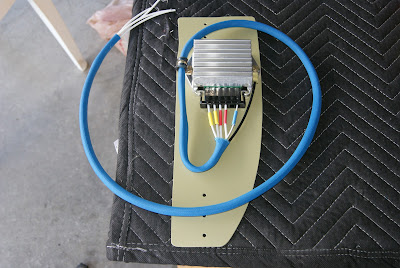 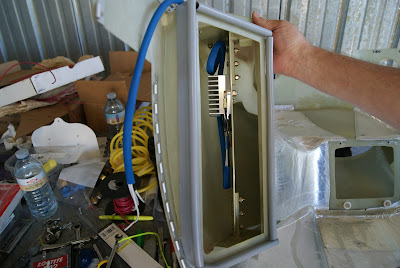 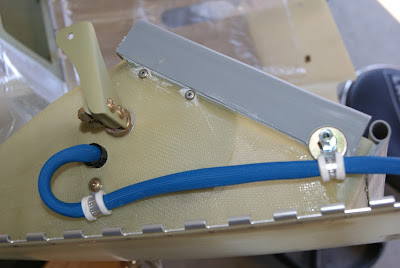 Wire harness exiting the wire grommet with a half loop and the two Adel clamps used to secure the wire harness.

The wiring of the Cinch 6-142 terminal barrier block is straight forward. Metal spade lead adapters were used so the existing wiring on the RV-12 could be used without cutting off the spade connectors. My thought is should the Silent Hektik regulator develop a problem in the future, it should be an easy task to just move the wires from the Cinch terminal block back to the Ducati regulator. I was going to use 45 degree tabs for the spade connectors but discovered they would interfere with the cover plate I want to install over the top of the Cinch terminal block … so opted to install the flat version. Once the mounting tabs were installed on the Cinch terminal block, the wires were moved from the Ducati regulator to the terminal block. In addition, a 12 gauge ground wire was run from the firewall mounted ground buss to the terminal block … this will supply the necessary ground (mentioned above) to the case of the Silent Hektik regulator. The Silent Hektik WEB site recommends and sells a 33,000 MFD capacitor that should be used with the regulator … however, the RV-12 already has a 22,000 MFD capacitor so the DOG Aviation procurement department purchased a 10,000 MFD capacitor that is automotive rated to 275 degrees. The capacitor is installed between ground and the regulator’s R lead … however, on the RV-12, the R lead and B+ Bat are tied together in the wire harness so the capacitor’s + lead can be tied to either of those two wires. For those not familiar with electrolytic capacitors, the leads are polarity sensitive …. so extra care must be used when wiring so make sure the – lead runs to ground and the + lead on the capacitor is run to a positive voltage. Often times the capacitor will be marked with a black stripe or marking to denote which lead is negative. Sometimes one lead will be cut shorter, this typically denotes the negative lead …. That said it is best to refer to the manufactures application data sheet just to be sure because capacitors can pop like a firecracker if not wired correctly. Wires were soldered onto the leads of the additional 10,000 MFD capacitor to extend them so the capacitor could be securely mounted up and away from the Cinch terminal block. After soldering the extension leads onto the capacitor, the solder joints and body of the capacitor were covered with heat shrink tubing and the capacitor was wire tied onto the wire harness coming from the Rotax engine.


To finalize the wiring for the regulator’s wiring harness, all of the wires coming from the Silent Hektik regulator mounted on the baffle plate were terminated with ring terminals and attached to the Cinch terminal block. I placed yellow heat shrink on the two wires that go to the input to the regulator to correspond with the color of the wires coming from the Rotax engine’s stator coil assembly (which is very similar to that of a typical motorcycle). Red heat shrink was used to denote the R & B+ Bat leads from the Van’s wiring harness and I used blue heat shrink to identify the remaining C wire. 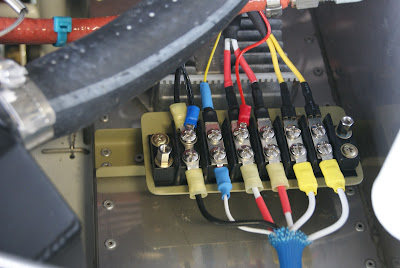 Completed wiring of the Cinch 6-142 terminal barrier block. One can see in this photo the two extra ring terminals that were placed on top of the ground and B + Bat lead on the terminal strip … these run to the additional 10,000 MFD capacitor. 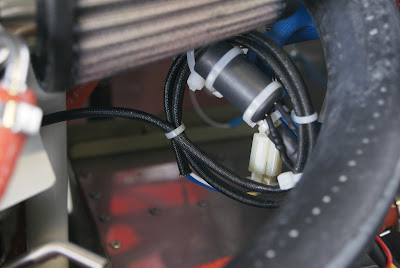 The additional 10,000 MFD filter capacitor mounded onto the wire harness from the Rotax engine.

The two coupler nuts that can be seen in the previous photo will be used to secure a protective cover for the Cinch terminal block. The DOG Aviation procurement department was able to locate a high temperature plastic at McMaster-Carr that is not rigid like a hard plastic. It is Noryl PPO and has all the necessary traits for this application ... high heat resistance, good electrical properities and it is a slightly flexible material that should be well suited for this application. 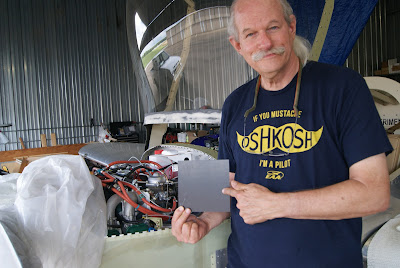 Sheet of high temperature plastic that will be cut down to make a protective cover for the wiring attached to the Cinch terminal block. 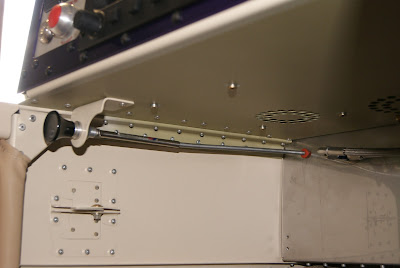 Finalized instillation of the baffle control cable under the instrument panel. 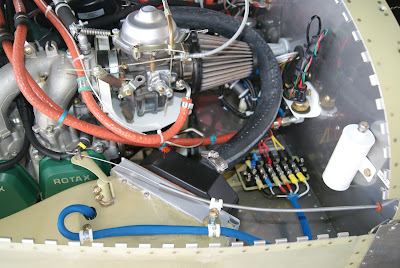 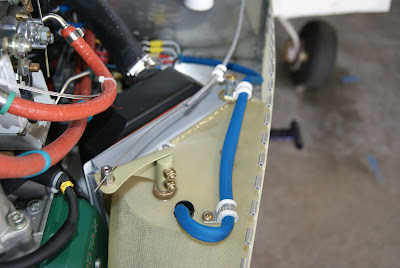 Close-up of the baffle control arm in the full open position.
Posted by John at 8:04 AM