Being the first condition inspection, it will be necessary to obtain some specialty tools along with jacks and sawhorses strong enough to support the weight of the airplane. At first, I was going to build strong wooden sawhorses but ran across some folding steel sawhorses rated at 1,000 pounds … but the legs were a little too tall. Both Van’s plans and maintenance manual say to obtain sawhorses 25" tall with padding … unfortunately, the steel sawhorses are taller so the legs will need to be cut shorter. Return from the future: Caution only make one sawhorse 25” tall and the other a little taller say 27 1/2" … more on that later. Folding steel sawhorses rated to 1,000 pounds …. the legs will need to be shortened to make them the required 25". 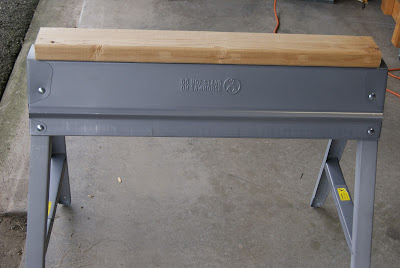 A 2x4 was screwed onto the top of the sawhorse but was deliberately left an inch or so short on either end to insure clearance between the RV-12’s steps which come out of the fuselage at an angle.


Next the 2x4 was covered with two layers of carpeting and then measurements were made for cutting the legs to obtain a finished height of 25" for one of them and cut the second sawhorse taller say around 27 1/2". 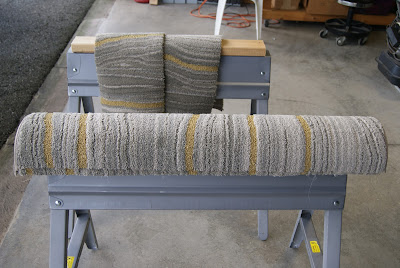 Cut carpeting ready to be attached onto the 2x4. 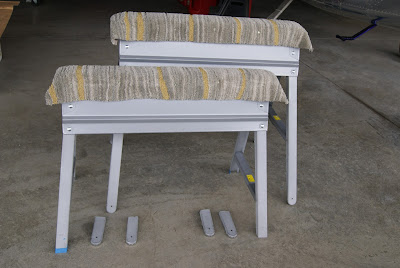 The completed shorter sawhorse in the front is covered with 2 layers of carpet and the legs have been cut to obtain a finished height of 25".


After cutting both sawhorses to the suggested 25" (which was a mistake), one of them was immediately used between the steps to hold the nose gear off the ground and worked perfectly. Because of the folding legs on the sawhorses, decided it best to use small C-clamps to insure the legs can’t accidently release. 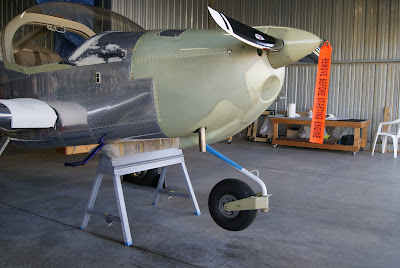 The sawhorse fit perfectly between the steps. Note the use of C-clamps just to make sure the legs can’t fold by accident.


Placing the aft sawhorse in position requires lifting the tail section upward. Mike K. was able to give me a hand removing the wings to lighten the load a little. With the wings off and the front of the fuselage sitting on a sawhorse placed between the steps, we inserted a large screwdriver through the aft tie down ring at the tail … Mike used the screwdriver to bench-press the tail upward (Mike said it was not very heavy and was easy to do). While Mike pushed the tail cone upward, I was able to slide the aft sawhorse into position under the fuselage. This is where I ran into an issue with the second sawhorse … discovered that the second sawhorse was to short and didn’t completely lift the main landing gear off the ground enough for a wheel removal. It required blocking the sawhorse up an additional 2 1/4" to get the main gear nicely off the ground. 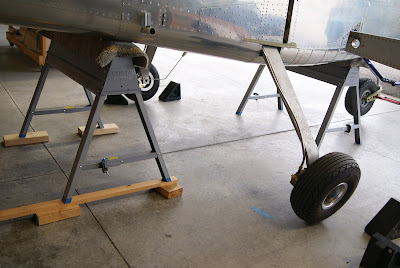 As can be seen in this photo, cutting the second sawhorse to 25" was a mistake … it is not quite tall enough to completely lift the main gear off the ground without the aid of additional wooden blocks. I would suggest making the second sawhorse 27 1/2" tall so the main gear can be easily serviced. Fellow builders take note: This is not the correct placement for the aft sawhorse, it should be located 6" forward on the rivet line between the rear wing-spar receptacles … the error was caught shortly after this photo was taken and the sawhorse was moved forward.


It bothered me that assistance is needed to bench-press the tail of the airplane every time a tire needs to be inspected/replaced or removed for changing the brake pads and inspecting the wheel bearings. Decided to cobble together a jack that can be used to lift the tail of the RV-12. I have seen various methods used such as mounting the jack on steel wheel rims … but not having direct access to a welder decided to keep it simple and use a 2'x2' plywood base since the RV-12 is such a light airplane. A hydraulic ram jack was purchased from Harbor Freight that has a 3,000 pound capacity and jacks to a height of over 42”. The jack will be placed on a 3/4" thick 2'x2' square of plywood and secured in place by the use of four pieces of 3/4" EMT conduit cut to 27 inches. The outer 2 1/4" of both ends were flattened in a vice then bent to the proper angles. 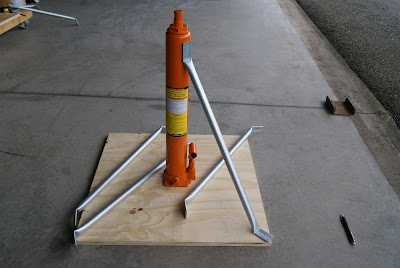 The makings of the jack … a Harbor Freight jack placed on a 2'x2' square of 3/4" thick plywood. Four 27" long tubes of 3/4" EMT conduit will secure the jack to the plywood base. 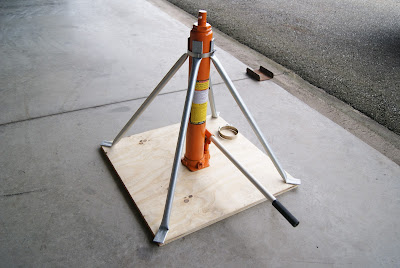 Ready to drill the holes so the support legs can be bolted to the plywood base.


The tie down rings on the RV-12 have a 3/8"-16 thread so decided the easiest way to “couple” the jack to the RV-12 would be to use a HARDENED 3/8"-16 carriage bolt and a 1" steel black pipe cap. Would suggest builders NOT use soft carriage bolts from big box stores … play it safe and use hardened ones ( also used hardened bolts for the support leg mountings as well). Using the pipe cap and carriage bolt has an advantage over a fixed rod solution, in that, the pipe cap will sit over the top of the ram with the rounded head of the carriage bolt contacting the top of the ram. The pipe cap is not a really tight fit over the ram so it can move a little …. this along with the curved head of the carriage bolt will allow for angular movement as the jack lifts the tail upward without placing any angular strain on the threaded portion of the bolt threaded into the tie down receptacle in the tail. 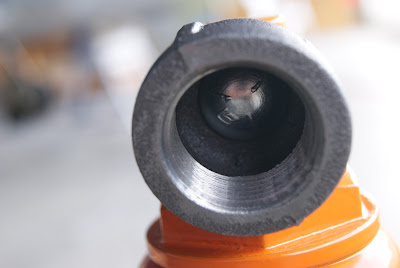 A 3/8" hole was drilled into the center of a 1" black pipe cap and filed square so a hardened  3/8"-16 thread carriage bolt could be inserted and bolted to the cap. 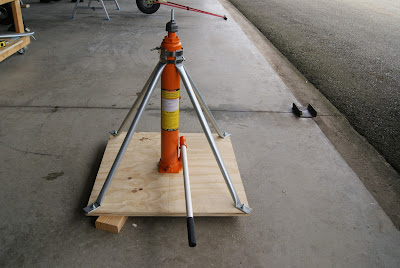 Completed jack ready to lift the tail of the DOG Aviation RV-12. The edges of the support legs still need to be ground down even with the plywood to remove the sharp edges that extend beyond the plywood. Also, although not in this photo, feel it would be a good idea to place some wood screws around the base of the jack to prevent the base from possibly sliding sideways … so will be adding a few screws around the base of the jack.


To lift the RV-12’s tail section, the tie down ring was removed and the pipe cap/carriage bolt assembly was threaded into the tie down ring’s hole. The jack was positioned under the tail cone and jacked up so the ram could be centered with the pipe cap. Once a good alignment was achieved, the tail of the RV-12 was jacked up to make sure the jack would go high enough to lift the fuselage off the aft sawhorse. The ram extended enough to easily raise the main gear wheels off the ground. It worked perfectly. 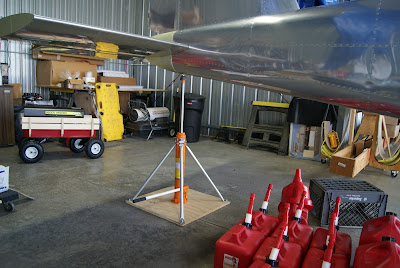 The jack in position … it easily went high enough to hold the fuselage off the aft sawhorse even with the aft sawhorse on the wooden blocks to make it taller. The jack assembly works like a champ and gets the DOG Aviation seal of approval.


Now that all three wheels are off the ground, it is time to begin the condition inspection on the DOG Aviation RV-12 and make a nose gear change/modification.
Posted by John at 7:07 AM