Back in February Van’s Aircraft issued Service Bulletin 18-02-02 involving possible cracks forming on the horizontal stabilator’s front spar. It appears a very tiny number of RV-12’s have developed stress cracks where the bearing bracket mounts onto the stabilator’s front spar. (Some believe the cracks are forming from the common practice of using the seatbelt to lock the control stick full aft which places the stabilator on the stop so it does not move and bang into the stops on windy days. As a result, some believe the energy from strong winds (or passing airplanes) is transferred directly into the spar at the nutplates for the stabilator mounting bolts causing the stress fractures over time).The service bulletin calls for removal of the stabilator and associated hinge brackets for an inspection of the front spar for cracking … if no cracks are found, the inspection is to be performed every 100 hours or annual inspection. If cracks are found, the service bulletin is to be installed immediately.


Just to be clear, NO cracks were developing on the DOG Aviation RV-12 … however, decided while the RV-12 is down for a condition inspection may just as well go ahead and install Service Bulletin 18-02-02 now and be done with it. I’m here to tell you getting the stabilator off and reinstalled just to inspect every 100 hours is not a piece of cake. As such, decided may just as well go ahead and install the service bulletin now as a preemptive strike and have one less thing to worry about. Plus, doing the work now means all the new parts will be on the stabilator when the RV-12 gets painted this coming spring.


Prior to attempting this service bulletin, you will absolutely want to procure a 12” long #30 drill bit to easily access some of the rivets that need to be removed and for drilling some of the new rivet holes. (As a side note, builders/owners may want to also consider replacing all the bolts that screw into nutplates with new bolts. In this case that involves replacing 16 AN3-4A bolts and 2 AN4-12A bolts. Is this truly necessary? Probably not. But I have it on very good authority that “ideally” bolts that screw into nutplates should be replaced after each use. Small bolts like these are really inexpensive, so during final assembly, the DOG Aviation RV-12 will receive new hardware at those locations on the stabilator where bolts screw into nutplates).


Some of the parts included with the service bulletin need to be separated on the band saw … after doing that all the parts were dressed on the Scotch-Brite wheel to remove burrs and smooth edges then prepped for priming. Because my Akzo epoxy primer is now way out of date and changing color, decided to use SEM self-etching primer and place the parts in a hot box for drying. 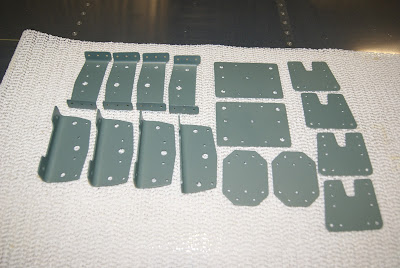 The parts for the Stabilator service bulletin primed and ready for instillation. 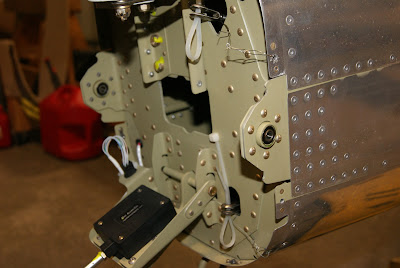 After removing the stabilator cables from the upper and lower stabilator horns, tie wraps were used to help prevent the cables from falling back into the tail cone …. note the safety wire is the insurance policy.


Note: Before discussing the actual instillation of the new parts, fellow RV-12 builders/owners and readers of this Blog should be aware I deviated from the instillation guide in three areas …. I did not drill the control horns per the plans (more on that a couple of paragraphs below), three solid rivets were used on the inboard flanges of the HS-01231B instead of two solid rivets and a pop rivet (more work but done for a consistent look) and lastly because flush rivets were installed on all the DOG Aviation’s RV-12 exterior skins, the rivet holes on the HS-01231C stabilator hinge gussets common to the stabilator’s skins were machine countersunk for flush rivets (99.9 % of builders won’t need to consider this unless, like myself, you used flush rivets on the stabilator’s skins).


OK, let’s get started. The process for the service bulletin begins by making measurements and marking the WD-1207 & 1208 upper and lower stabilator horns to receive six AN426AD3-4 rivets each. The six rivet locations are to be carefully marked and center punched on each stabilator horn. After center punching the horns, the HS-01232 stabilator horn doubler is centered beneath the WD-1207 stabilator horn then match drilled into the HS-1211 spar cap and secured with Clecos. 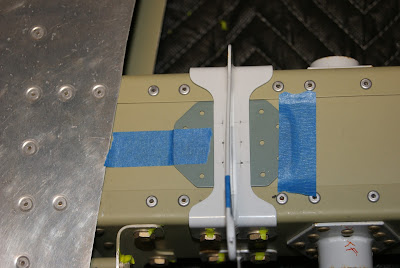 The HS-01232 doubler is centered under the WD-1207 stabilator horn and between the edges of the spar box and taped in place. Note the center punching for the six holes to be drilled into the WD-1207 horn can be also seen. Also of note, the center punch marks were biased just outboard of the lines to make it a little easier to squeeze the rivets with the pneumatic squeezer (done later). 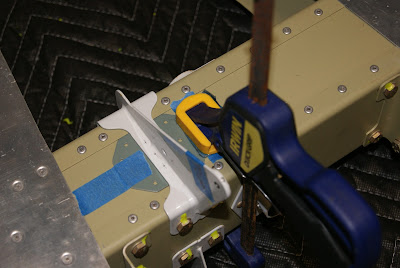 Prior to drilling, a clamp was used just to make sure the HS-01232 doubler does not move during the drilling process. 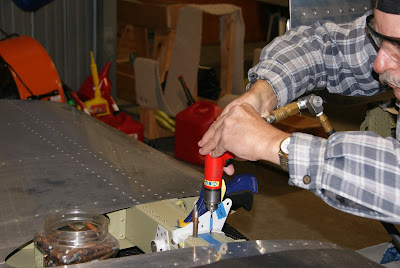 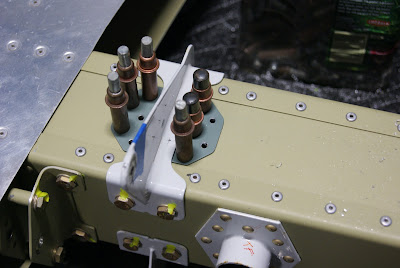 
My solution was to NOT drill the remaining six holes directly into the HS-1211 spar cap … this was accomplished by first removing the WD-1207 and moving it to a drill press, drilling a #50 lead hole at the six center punched rivet locations, then stepping up the six holes to the final size of #40. 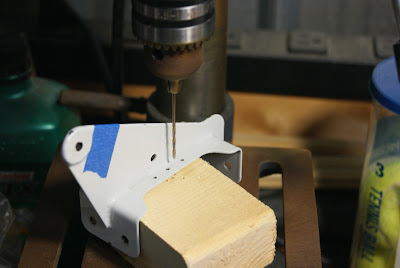 Completed drilling of three rivet holes to #50 on one side of the WD-1207 horn … three down three to go. 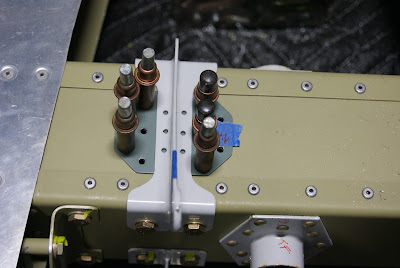 Newly drilled WD-1207 horn bolted back in position so the newly drilled #40 holes can be used to match drill the underlying HS-01232 doubler. 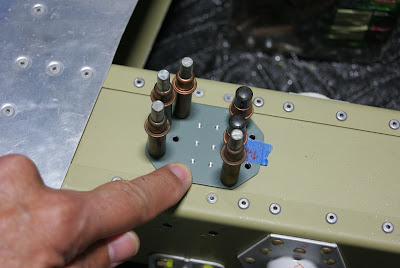 Using the #40 holes in the WD-1207 as guides, one can see the HS-01232 doubler was drilled just enough to create nice dimples that can be used to complete the drilling on the drill press. 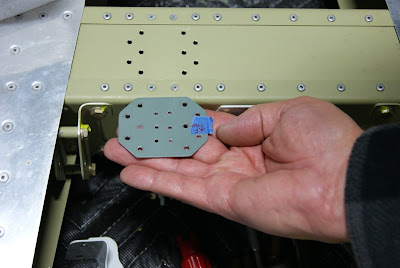 The HS-01232 doubler with the newly created six holes … note the spar cap in the background came out unscathed without the additional six holes (that would not be used for rivets) had the service bulletin instructions been followed exactly as written. 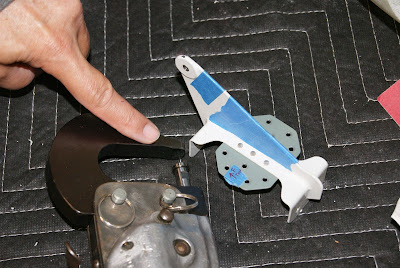 A “no hole” yoke was used on the pneumatic rivet squeezer to secure the HS-01232 doubler to the bottom of the WD-1207 stabilator horn using AN426AD3-4 rivets. 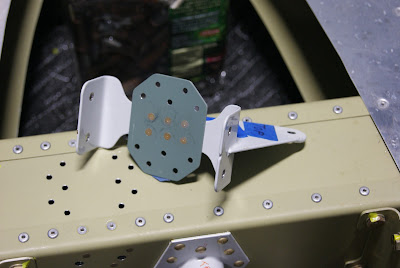 Completed riveting of the HS-01232 doubler to the WD-1207 stabilator horn. 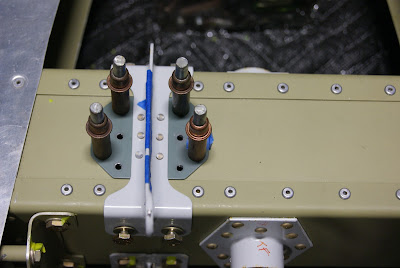 
I’m very happy … this portion of the service bulletin turned out great! And with no extra holes in the HS-1211 spar cap. Admittedly, it took more time doing the drilling this way and lots of care needs to be taken to assure proper alignment … just move slowly if considering performing the work the way I did it. Next up is installing the new hinge brackets which will be documented in the next post.
Posted by John at 7:15 PM