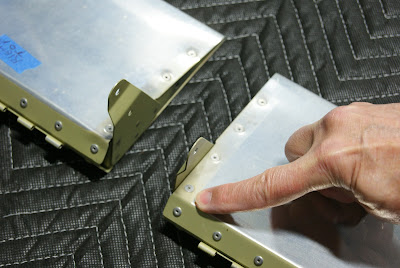 My finger is pointing to the area on the anti-servo tab skin that needs to be inspected for cracks.


Depending on the results of an inspection of the anti-servo tabs, Service Bulletin 18-02-03 will take the builder/owner on one of three paths:


1. - No cracks are discovered (that's good) fly on and reinspect during the next annual condition inspection.


2. - No cracks are discovered ... however, the builder/owner decides to go ahead and perform the steps in Service Bulletin 18-02-03 and just replace the inboard ribs to prevent cracks from forming.


3. - Cracks are found - This will involve not only replacing the inboard ribs on the anti-servo tabs and but also installing doublers to cover the cracks and strengthen the weak area.

Builders/ owners take note …. the DOG Aviation RV-12 was constructed using flush rivets, so you will see dimpled holes and flush rivets on the anti-servo tab’s skins and ribs in most of the photos in this post. Those of you using the photos found here as a general reference, please disregard the skin and rib dimples and the use of flush rivets attaching the skins to the ribs … your anti-servo tab’s will not be dimpled so you will be using the standard Van’s LP4-3 pop rivets that come with the service bulletin to secure the skins to the new ribs.


Performing the work on the service bulletin (via either path 2 or 3) involves removal of the HS-1222 inboard rib on each anti-servo tab (the rib that the HS-1220 control horns are riveted onto) and replacement with a new HS-1230 rib included with the service bulletin parts.  In addition to the two new HS-1230 ribs, Service Bulletin 18-02-03 also contains additional parts used to reinforce the anti-servo tabs if cracks are discovered … those parts are HS-1226A & HS-1226B (upper and lower doublers which come as one piece and require separating) and the HS-1228 spacer. 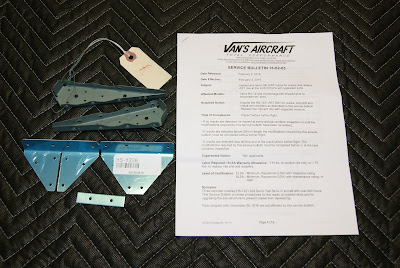 
Because the DOG Aviation RV-12 had no cracking on either anti-servo tab, the doublers will not be used …. however, the drawing and photo below shows where the parts will end up being installed if cracks are discovered. 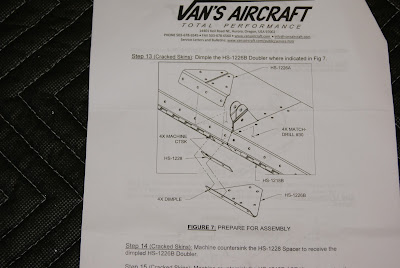 Figure 7 from Service Bulletin 18-02-03 showing the placement of parts if cracks are discovered on the anti-servo tab skins. 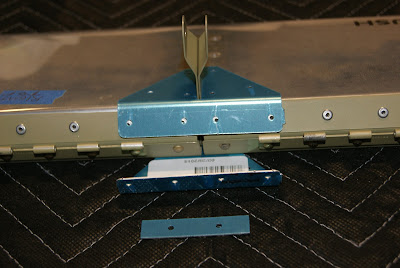 
So what does replacing the inboard ribs of each anti-servo tab accomplish? It makes the assembly much stronger and will greatly reduce skin flexing adjacent to where the control horn attaches to the anti-servo tab’s inboard ribs. By looking at the close-up below, one can clearly see that the original HS-1222 inboard rib ends just forward of the control horn leaving an open gap between it and the spar that allows the thin skin to flex between the HS-1222 rib and the spar. The HS-1230 replacement rib now goes all the way forward and has tabs which will be riveted to the anti-servo tab’s spar … which can be seen in the photo below on the far right in the photo below. 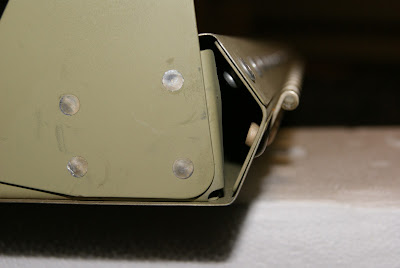 Side view close-up of the inboard portion of the left anti-servo tab. As one can clearly see, the HS-1222 rib that the control horn is riveted onto ends just forward of control horn leaving a large gap between it and the anti-servo tab’s spar on the far right. 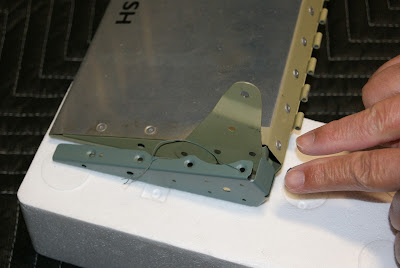 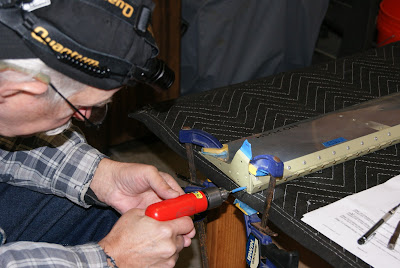 After a tiny lead hole was drilled into the center of each rivet, a #40 drill bit was covered with masking tape to denote the depth to drill … which was not quite all the way through the head of the rivet. 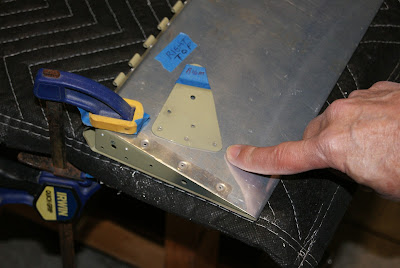 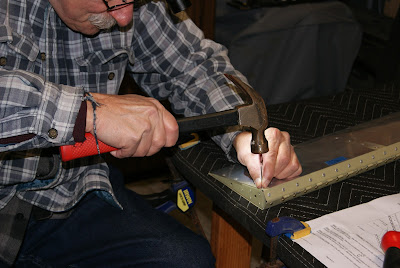 Carefully pounding out the mandrel from one of the rivets that would have been very difficult to access if the control horn were not removed first. 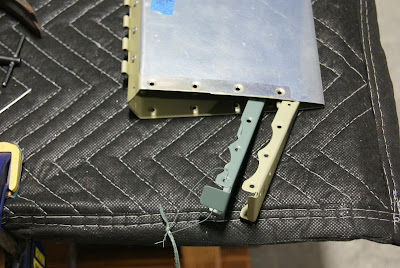 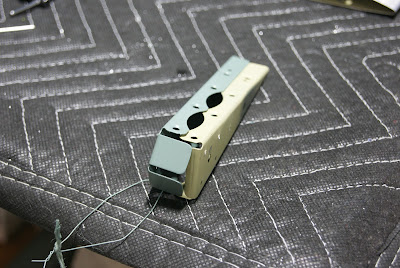 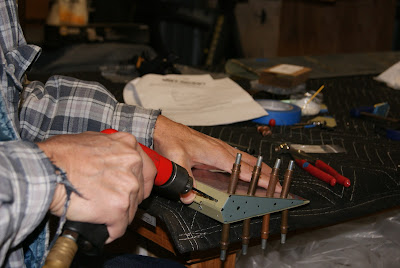 Using a #30 drill bit to match drill the anti-servo tab’s spar to the flange on the new HS-1230 rib. 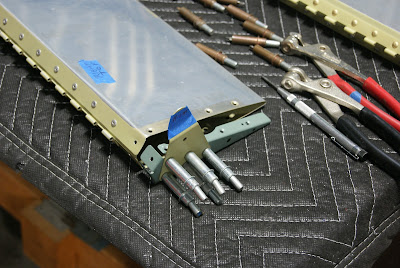 The right HS-1220 control horn secured on the new HS-1230 rib with Clecos and ready for riveting. 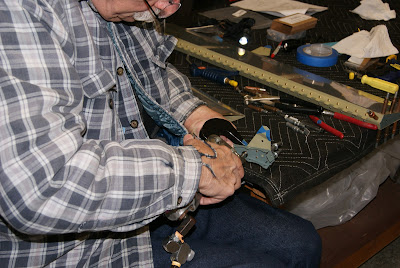 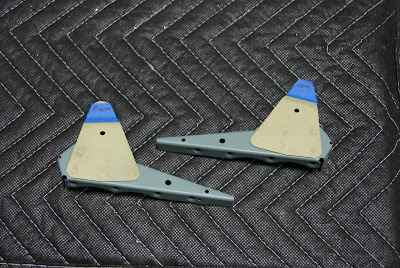 Both HS-1220-L&R control horns riveted onto the new HS-1230 ribs and ready for final riveting onto the anti-servo tabs. Here again, disregard the dimples in the ribs ... they are unique to the DOG Aviation RV-12.


Final assembly is straight forward … insert each HS-1230 rib/ HS-1220 control horn assembly under the anti-servo tab’s skins and secure with Clecos. Eight rivets are used to rivet the skins to the ribs and two more rivets are used to rivet the spar to the flanges on the new HS-1230 ribs. The offset on the HS-1220 control horn does create a small access issue for the two rivets adjacent to it. The easiest way to get around the issue is to place a slight bend on the rivet’s mandrel with a pair of pliers and then use a small piece of AEX wedge slid over the rivet. Doing this will place the hand rivet puller at a small enough of an angle to clear the HS-1220 control horn and still allow the rivet to be kept square to the skin while the rivet is set. Long time readers of the DOG Aviation Blog have seen this method used before when setting rivets in tight spots. 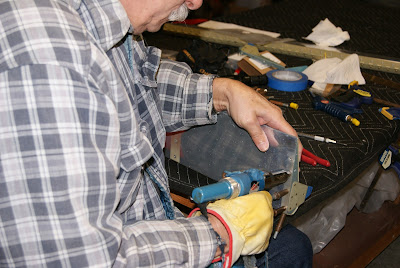 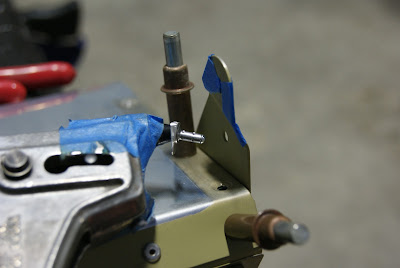 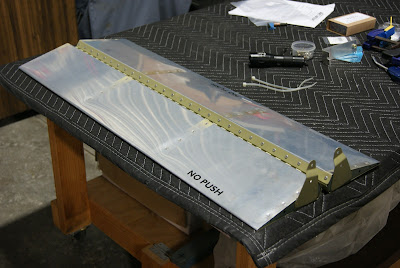 Completed Service Bulletin 18-02-03 (rib replacement only) … both anti-servo tabs now have the new HS-1230 ribs installed and are now ready to be placed back in service.


In the grand scheme of things, Service Bulletin 18-02-03 is not very time consuming and quite easy to accomplish. The only task that one really needs to perform as careful as possible is drilling out the HS-1220 control horn rivets … because one does not want the rivet holes to become elongated. As mentioned above, carefully mark and center punch the rivets, then drill a tiny lead hole #60 or smaller to minimize drill bit drift when drilling with the #40 drill bit.
Posted by John at 8:59 AM