Now that the record breaking cold temperatures of February and early March are behind us,  the spring warm up has begun to melt the ice and snow creating problems with water intrusion at DOG Aviation.

For those builders thinking of renting hangar space in areas of the country where winter is a factor, consider this …. DO NOT rent a north facing hangar unless no other options are available. The snow and ice just won’t go away from in front of the hangar and the runoff from the roof creates thick ice dams in front of the door which can cause water intrusion inside the hangar

The earlier part of the week was spent chipping ice away from in front of the hangar door as well as a thick ice sheet from inside the hangar as well. As water ran in during the daytime, the nighttime low temperatures froze it solid. Of course, it does not help that whoever the contractor was that poured the concrete hangar floor was an idiot … the water wants to flow inside the hangar and not away from it because the slope of the floor is incorrect. 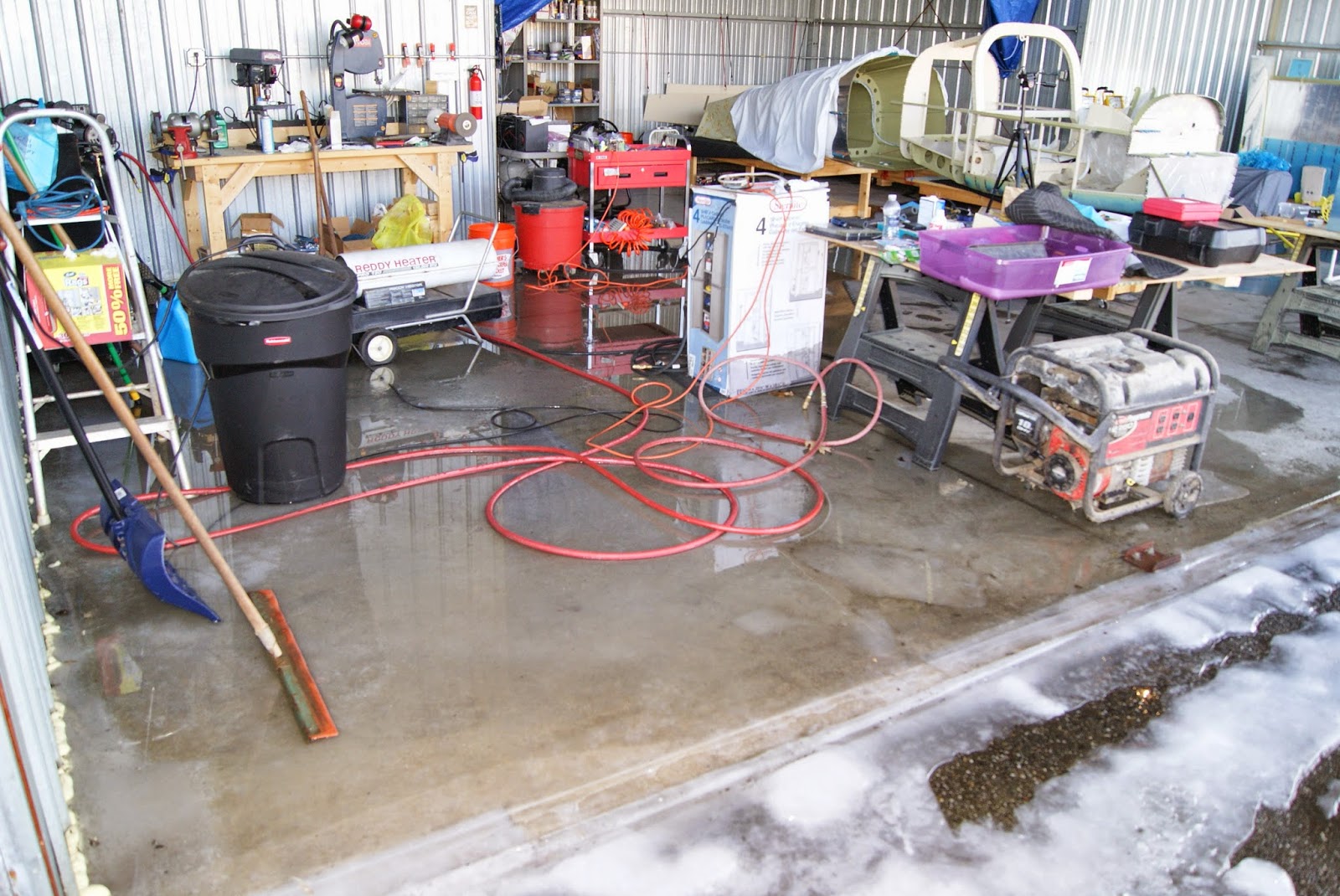 A 1/4" of water is on top of about 1" of ice there was also a smaller lake on the other side of the hangar as well. 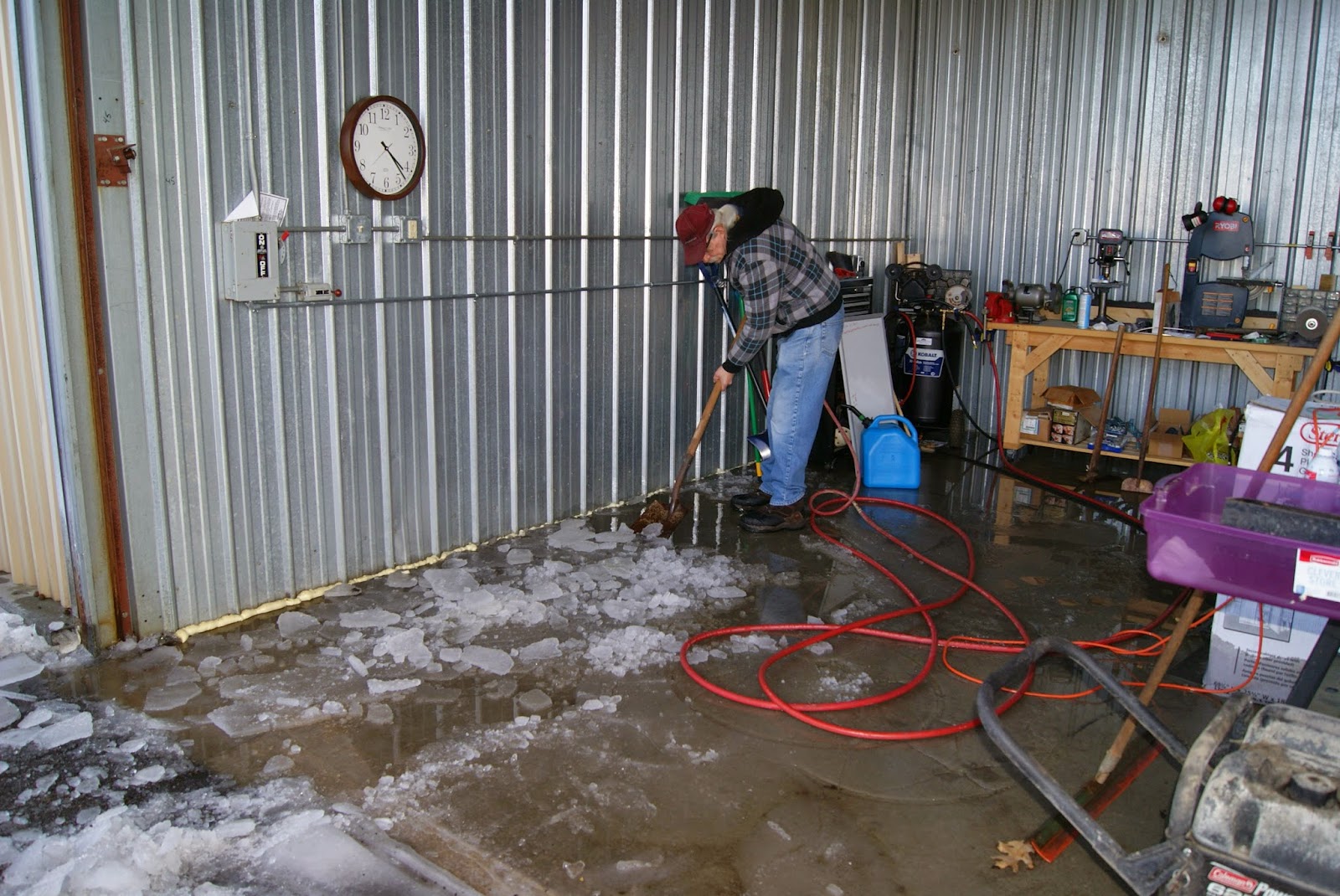 Shoveling chipped ice away from inside the hangar.

To help with the ice removal, Mike (who has the adjacent hangar) and I went halves on a 42" long pneumatic air scraper from Harbor Freight. Have to say, it does an admirable job of chipping through the thick ice dam in front of the hangars. We tried a large propane torch at first and realized that was a lost cause ... too much thermal mass to overcome. I thought the large hot flame would almost instantly melt away the ice ... not so. 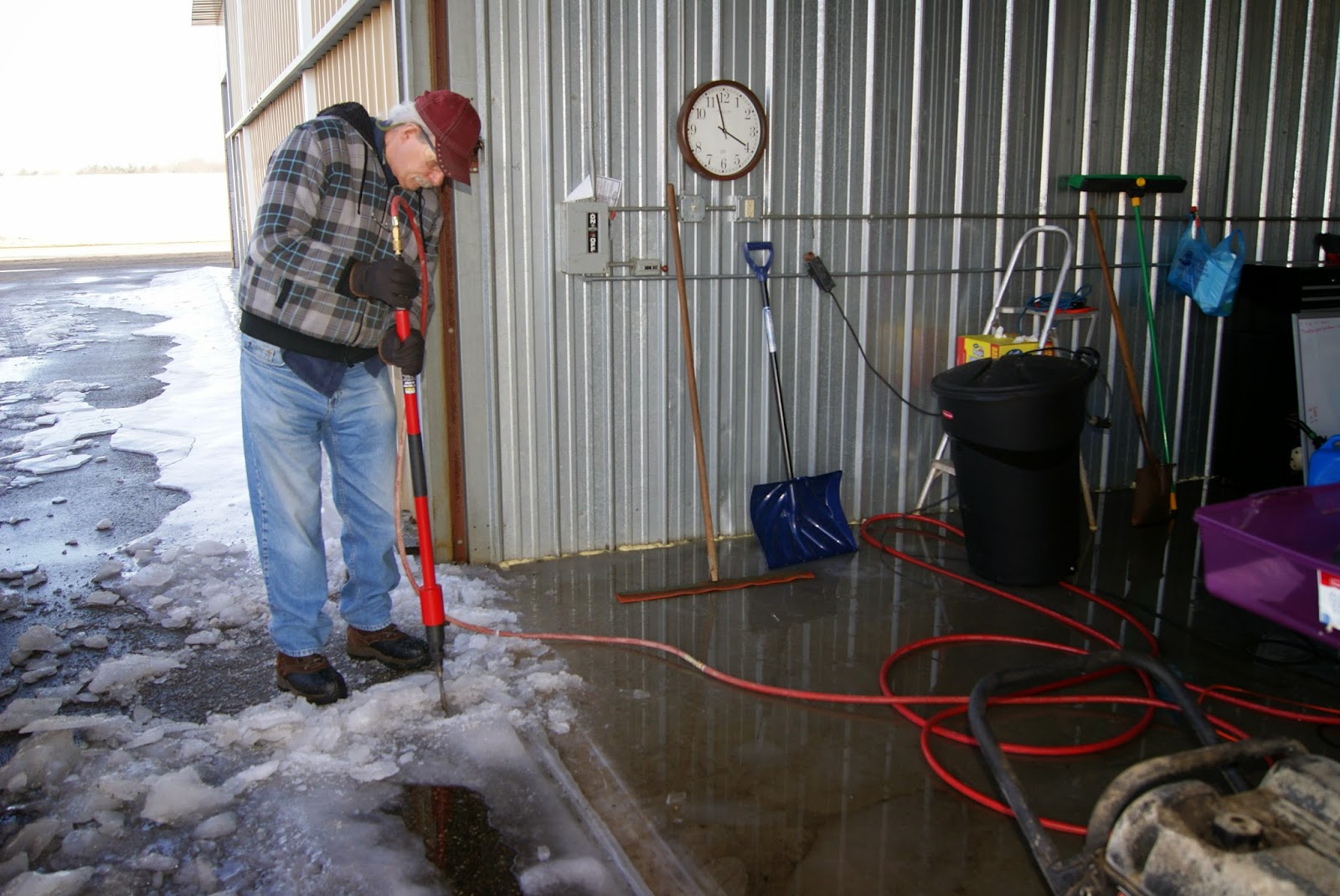 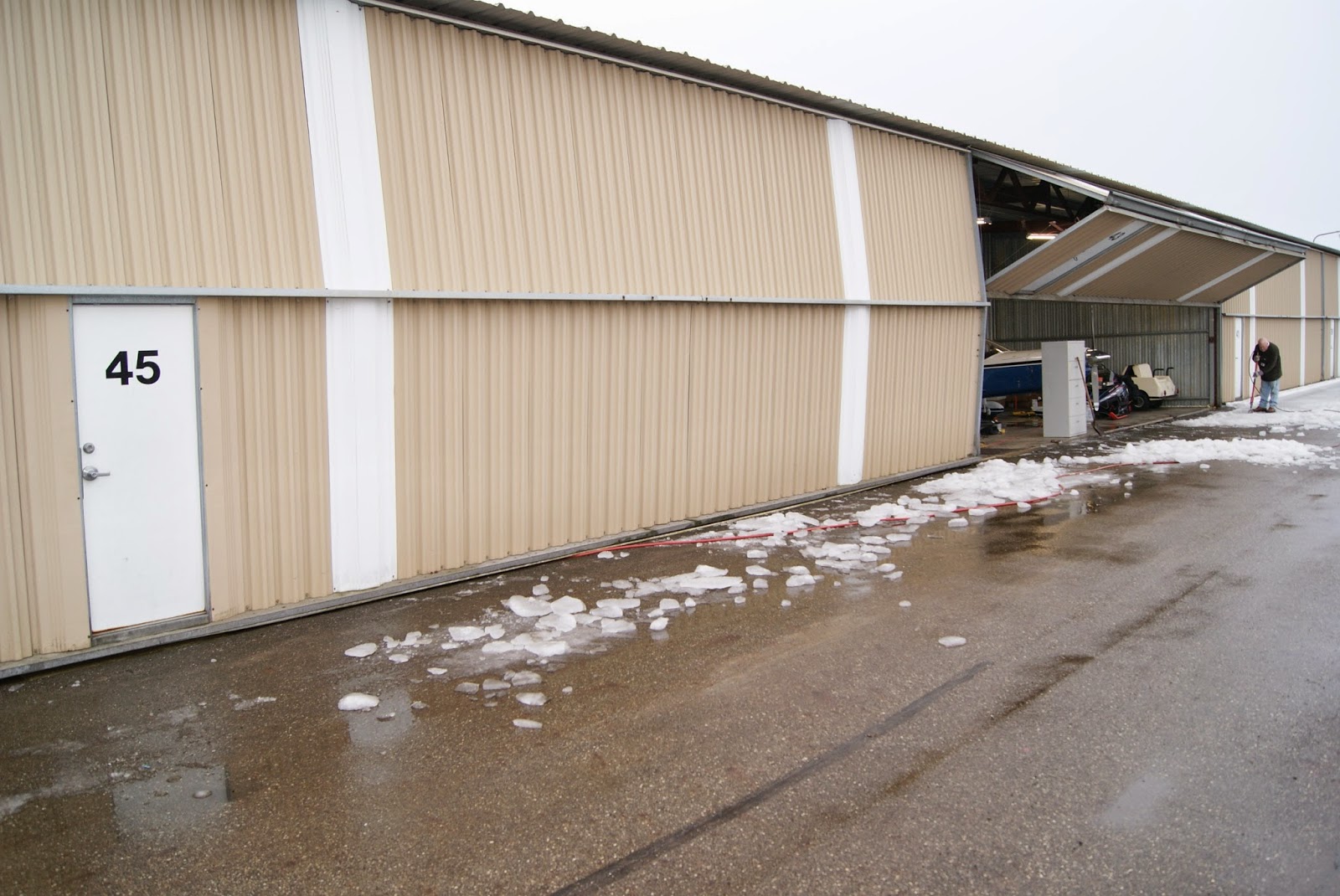 Ice dam in front of DOG Aviation’s hangar door now broken up … Mike in background working on removing the ice from in front of his hangar. 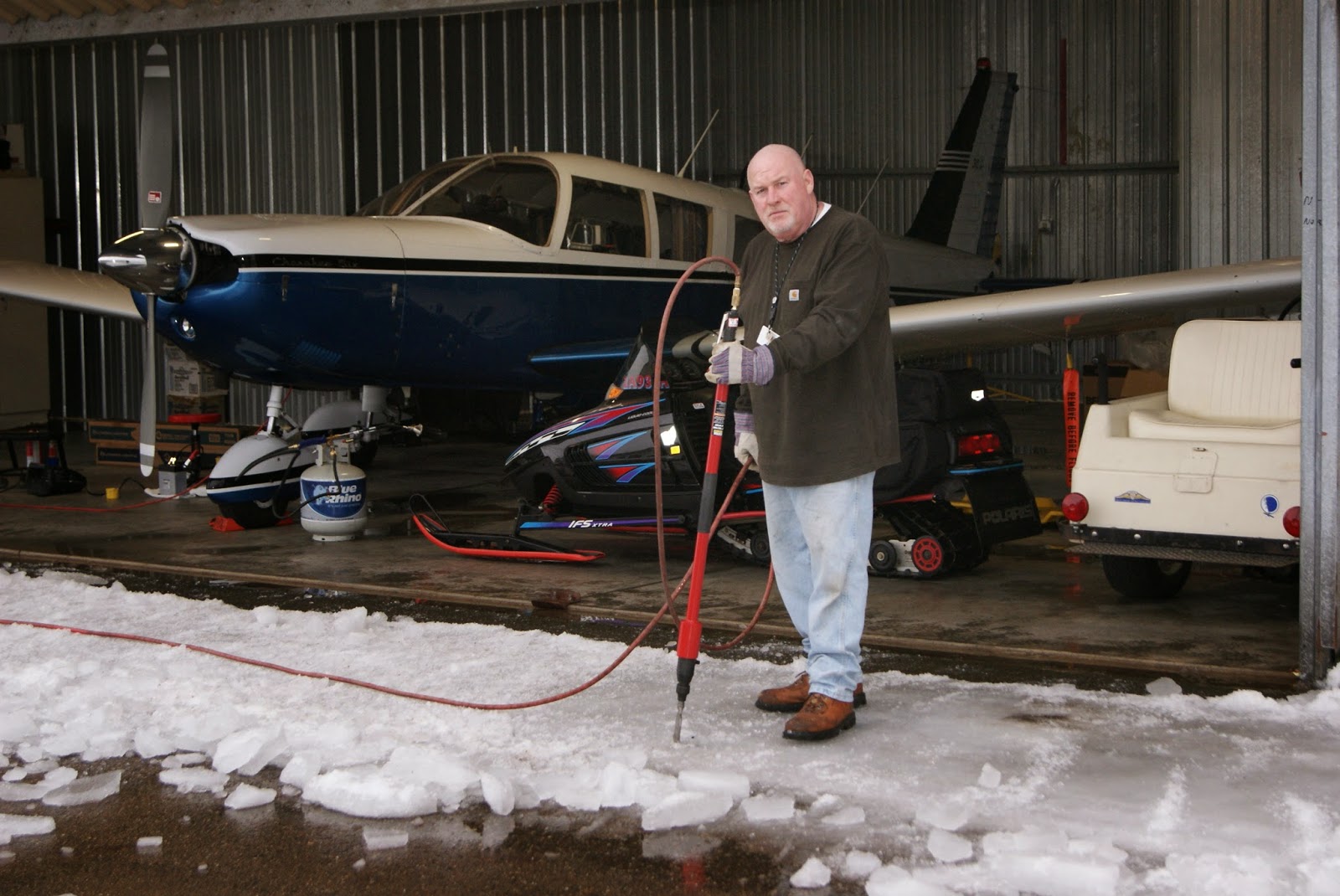 Mike chipping away and breaking up the ice buildup in front of his hangar with the Harbor Freight scraper.

Both our hangars got quite wet, so we got a hold of some large squeegees to push the water puddles out of the hangars. In my case, I had much more water than Mike did so had to move everything around to get to all the water … then of course rearrange the shop again. Needless to say all this has put me in a sour mood so no work was done on the RV-12 this week. Plan on hitting it hard next week.
Posted by John at 2:44 PM