So goes it for forward progress on the DOG Aviation RV-12 … time to take a few steps backwards and perform a service bulletin retrofit. A few months ago Van’s released service bulletin 14-12-06 which addressed the possibility of cracks developing on the F-1206F bearing bracket brace. To my knowledge only a few RV-12’s have developed the cracks which can be seen in the photo below of the service bulletin’s cover sheet. To Van’s credit, a solution to the issue was quickly developed consisting of a new F-1206F-1 bearing bracket brace which will now attach onto a much stronger piece of aluminum angle F-1206J which will absorb the forces causing the cracking of the bracket. 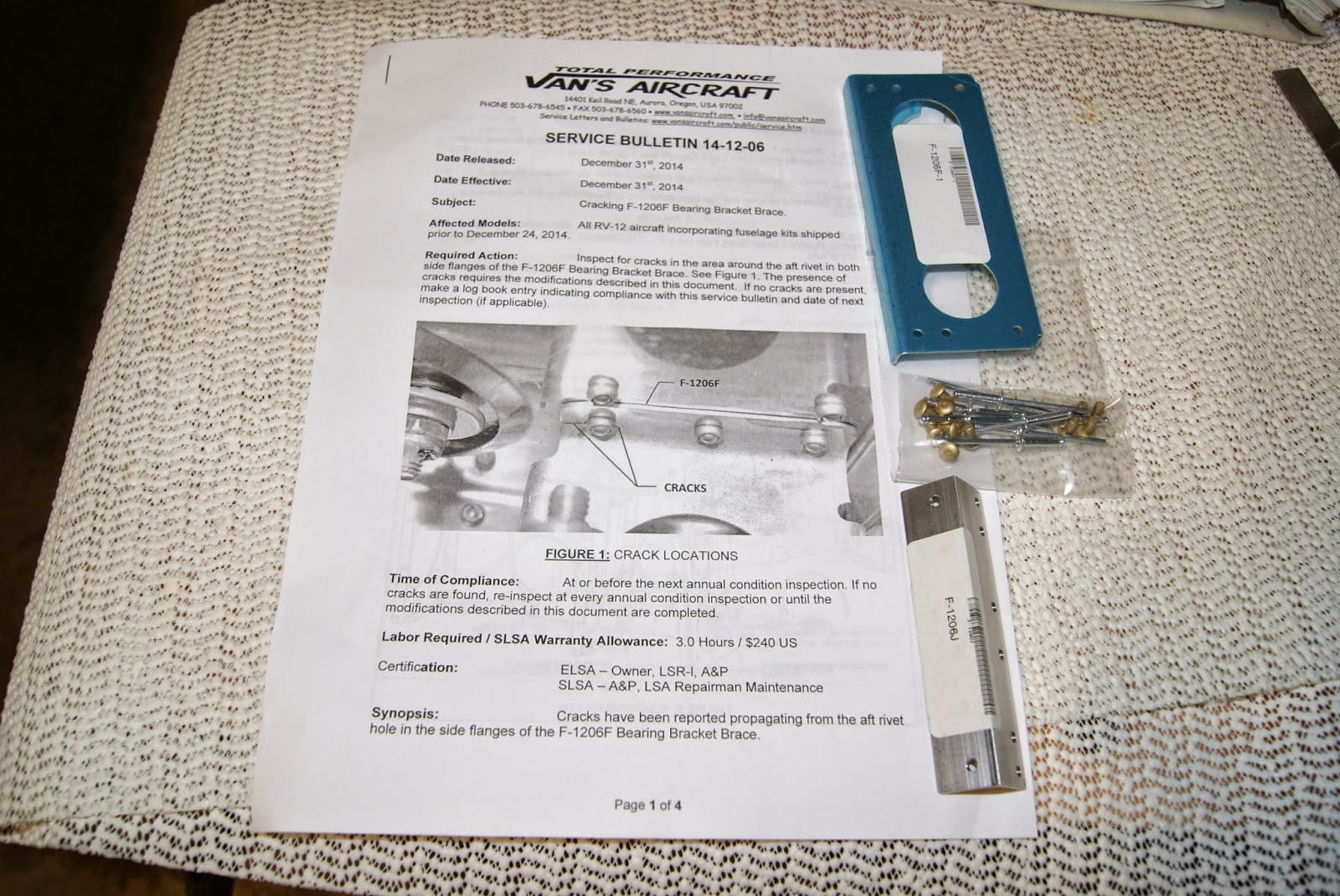 Photo of the cover sheet for service bulletin 14-12-06 shows the area where cracks are appearing. The parts for the bearing bracket brace retrofit are also shown ... the angle is cut in half to obtain the left and right mounts.

This service bulletin is not mandatory, but regular checks of the affected area are required … and if cracks appear, the old parts are to be replaced with the upgraded bracket brace assembly. My original thought was to just fly the RV-12 and should a crack appear replace the parts at that time. But then I realized I had complicated maters a whole lot because of my choice to rivet the forward edge of the F-1206F bearing bracket brace onto the F-1206A bulkhead with solid rivets. This area is not easily accessible even with the aid of an angle drill ... not to mention hidden from view by the bracket. A moment of clarity … should a crack develop, it would be a bear to remove those solid rivets after the RV-12 is completed because the bearing brace hides the rivets so I would be drilling blind .. not good. Note to self: It would be wise to just take the time to replace the parts now. Drilling out the solid rivets now will be tough enough because the access sucks, but if completed now, at least the work can be done while standing, instead of crawling inside the fuselage if done at a later time. Drilling out the solid rivets will truly be a daunting task if done after the aircraft is completed. 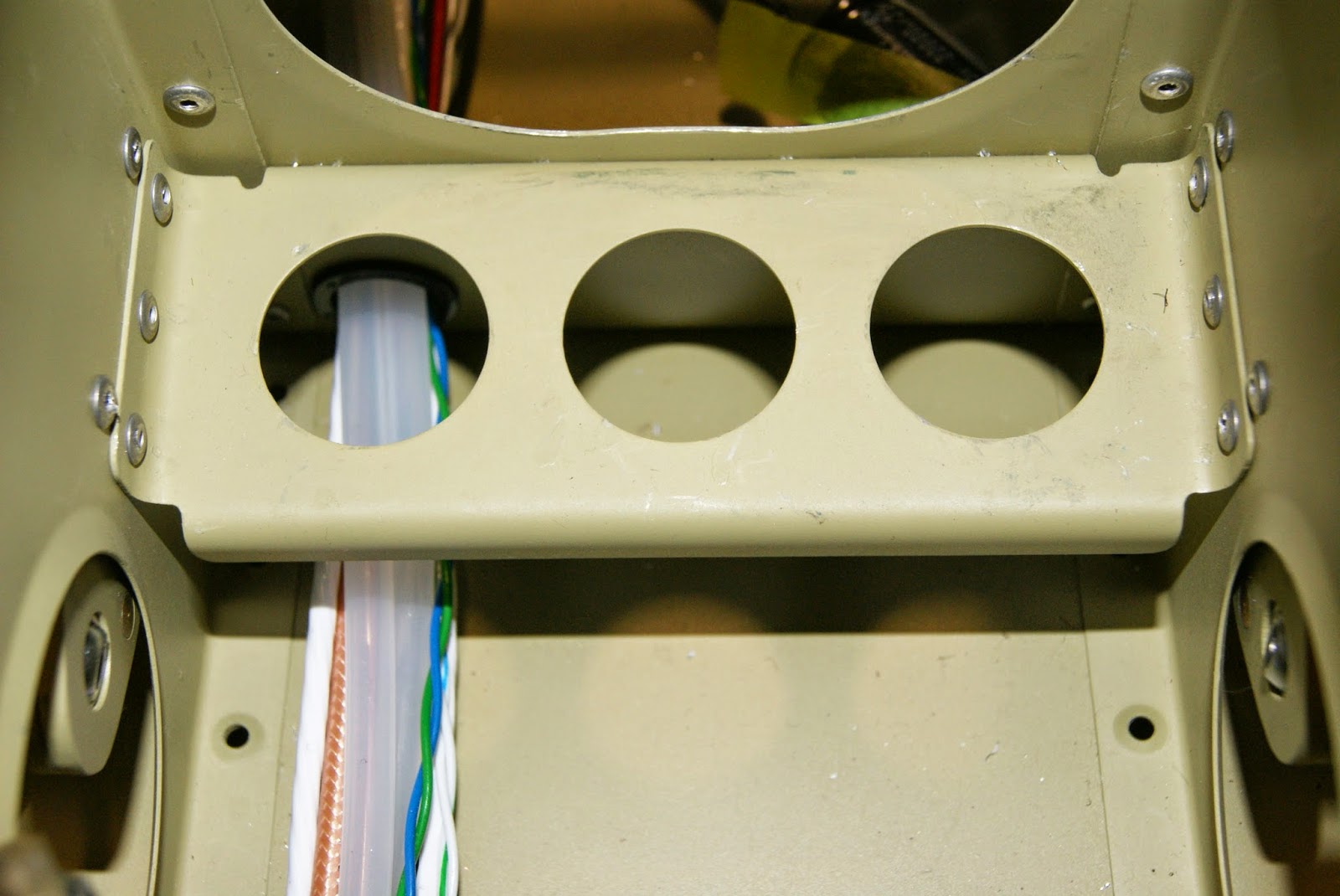 The existing bearing brace is installed with three pop rivets on each side and the forward edge, not seen in the photo, is riveted onto the F-1206A bulkhead with four AN470AD4 solid rivets in place of the pop rivets called for in the plans.

One problem is the angle drill has a large head compared to all metal angle drills … this is because it is inexpensive compared to the all metal versions and made from some sort of tough plastic. As such, in order to get square access to the forward most pop rivets decided it would be best to use a Dremel with a cutoff wheel and remove the majority of the F-1206F bearing bracket brace. It was quickly realized the cutting wheel mounted directly to the Dremel would not work because of the tight quarters. Mike has a Dremel flex shaft attachment which is much like a speedometer cable with a chuck on the end of it and that worked quite well to make the big cuts ... once again, thanks Mike. 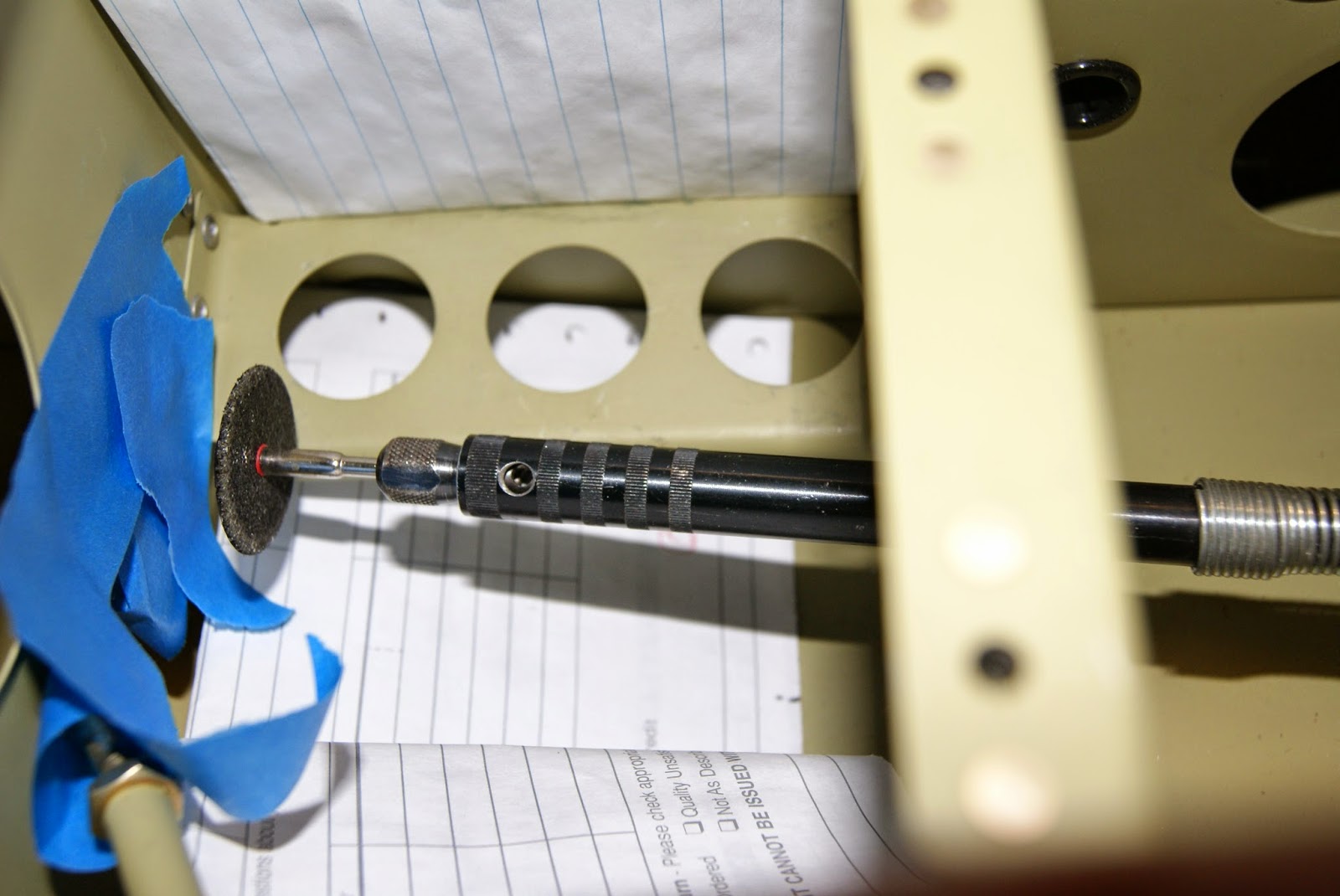 About to begin cutting away the F-1206F bearing bracket brace with a cutoff wheel fitted to Mike’s Dremel flex shaft attachment.

After making the big cuts with the Dremel tool, a hand hack saw was used to make cuts into the corners of the brace so it can come out in three separate pieces once all the rivets are removed. 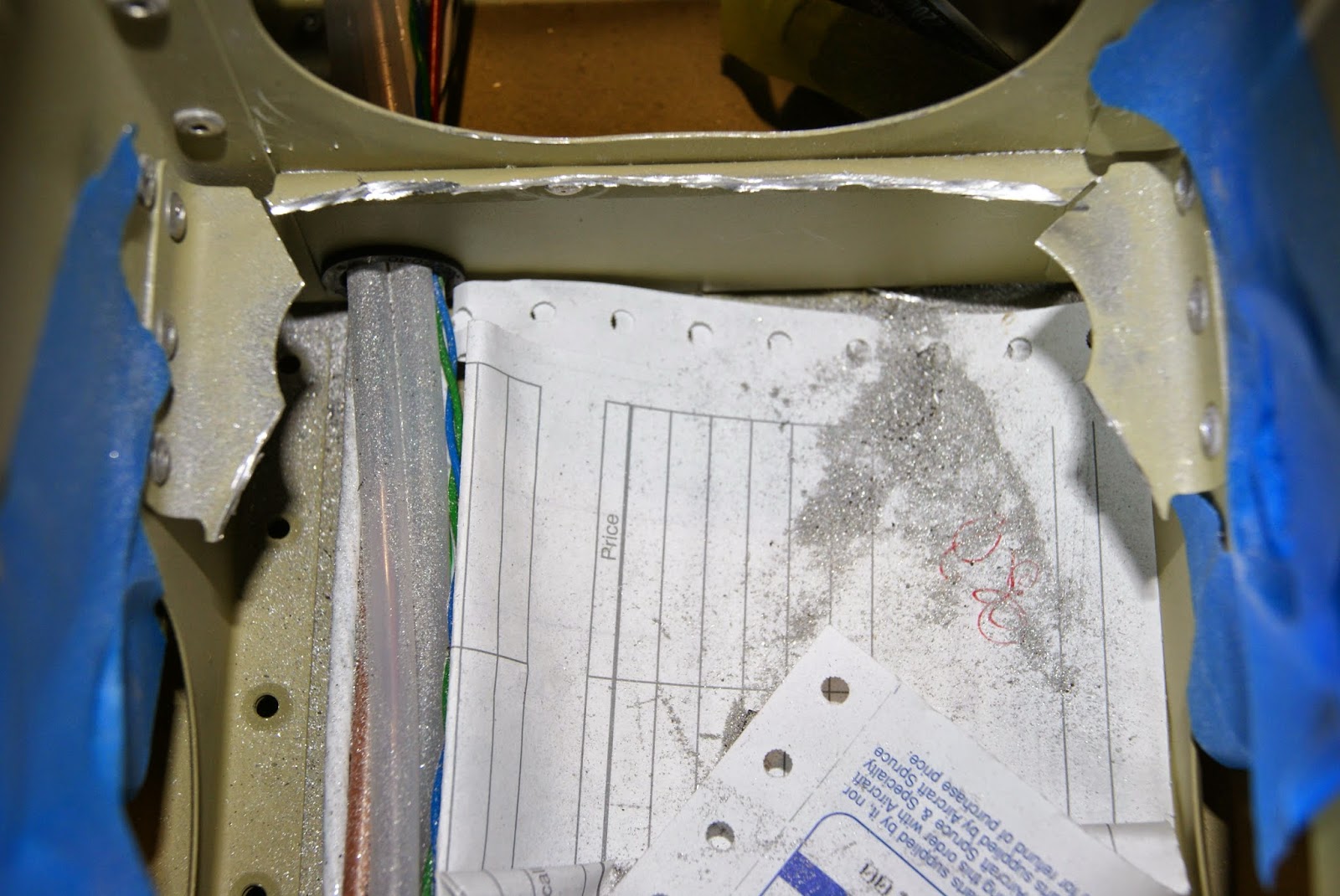 F-1206F bearing brace bracket after all the cuts have been made with the cutting wheel and hand hack saw. 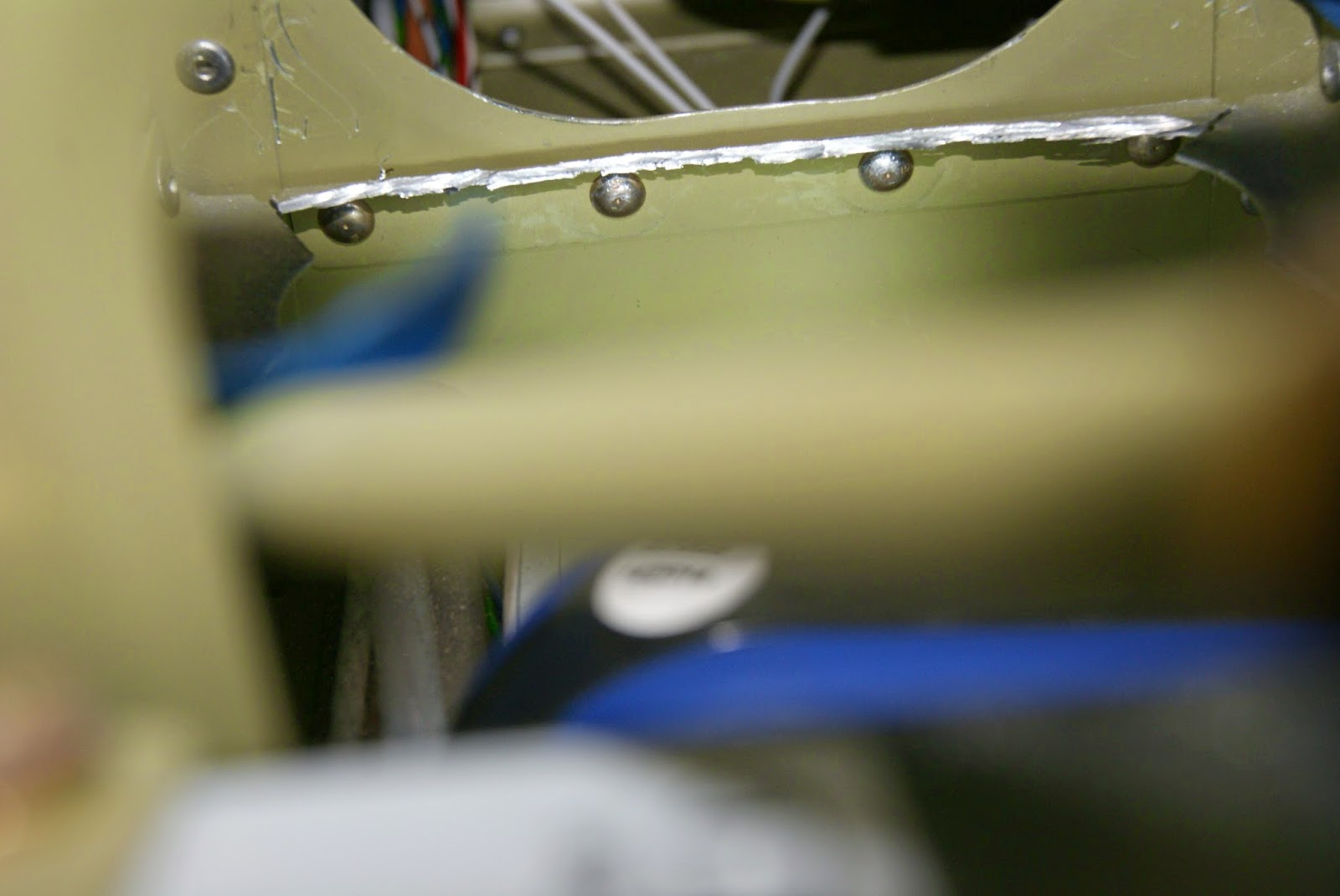 Now all four of the solid rivets can be seen so hopefully drilling them out should go better than doing it totally blind.

Once most of the F-1206F bearing bracket was removed, and the corner cuts completed the mandrels inside the six pop rivets were pounded out and the heads of the rivets were drilled out using the angle drill attachment. After all the pop rivet heads were removed, the remaining bracket brace pieces were easily removed. 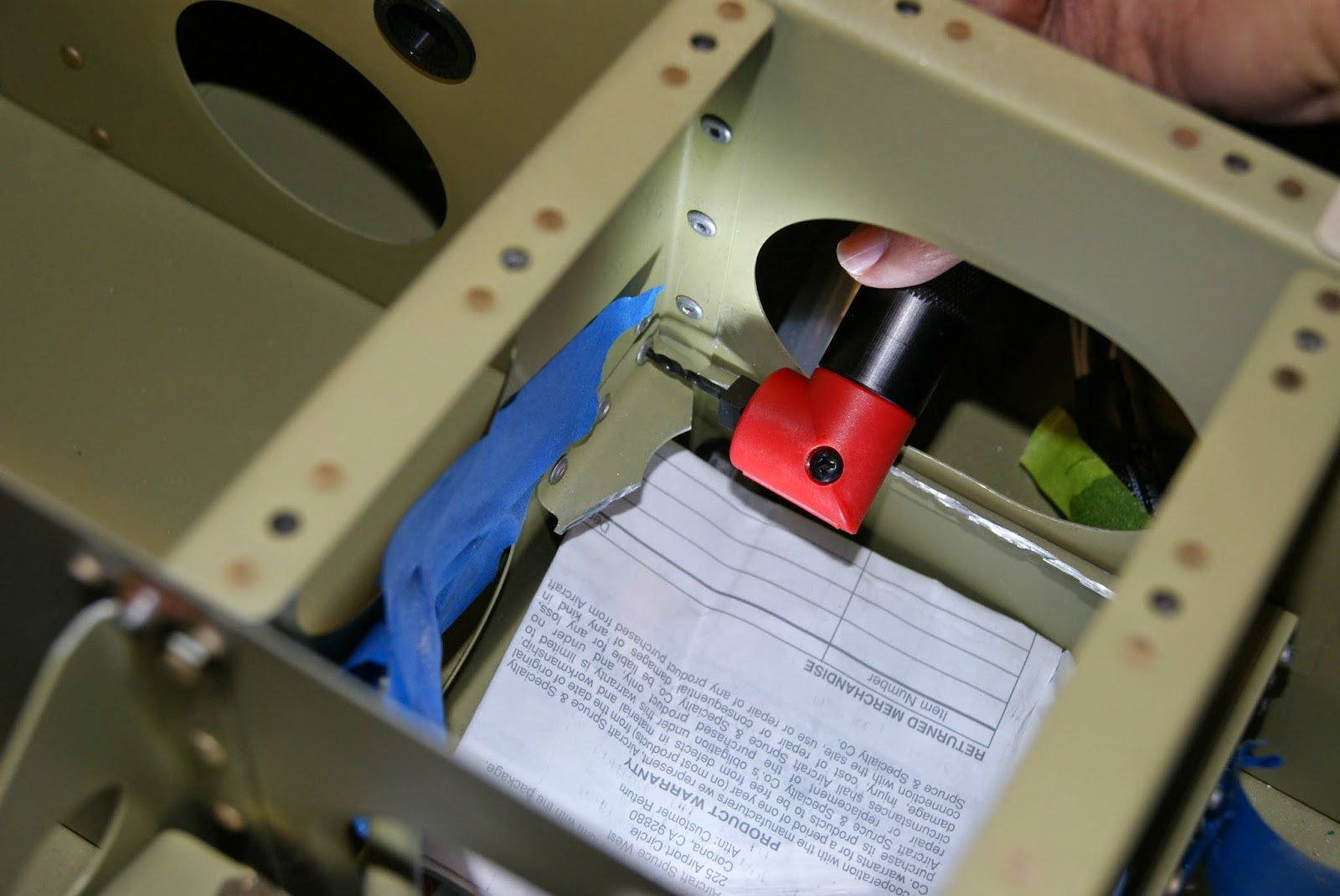 About to begin drilling a #40 lead hole into the head of one of the six pop rivets. 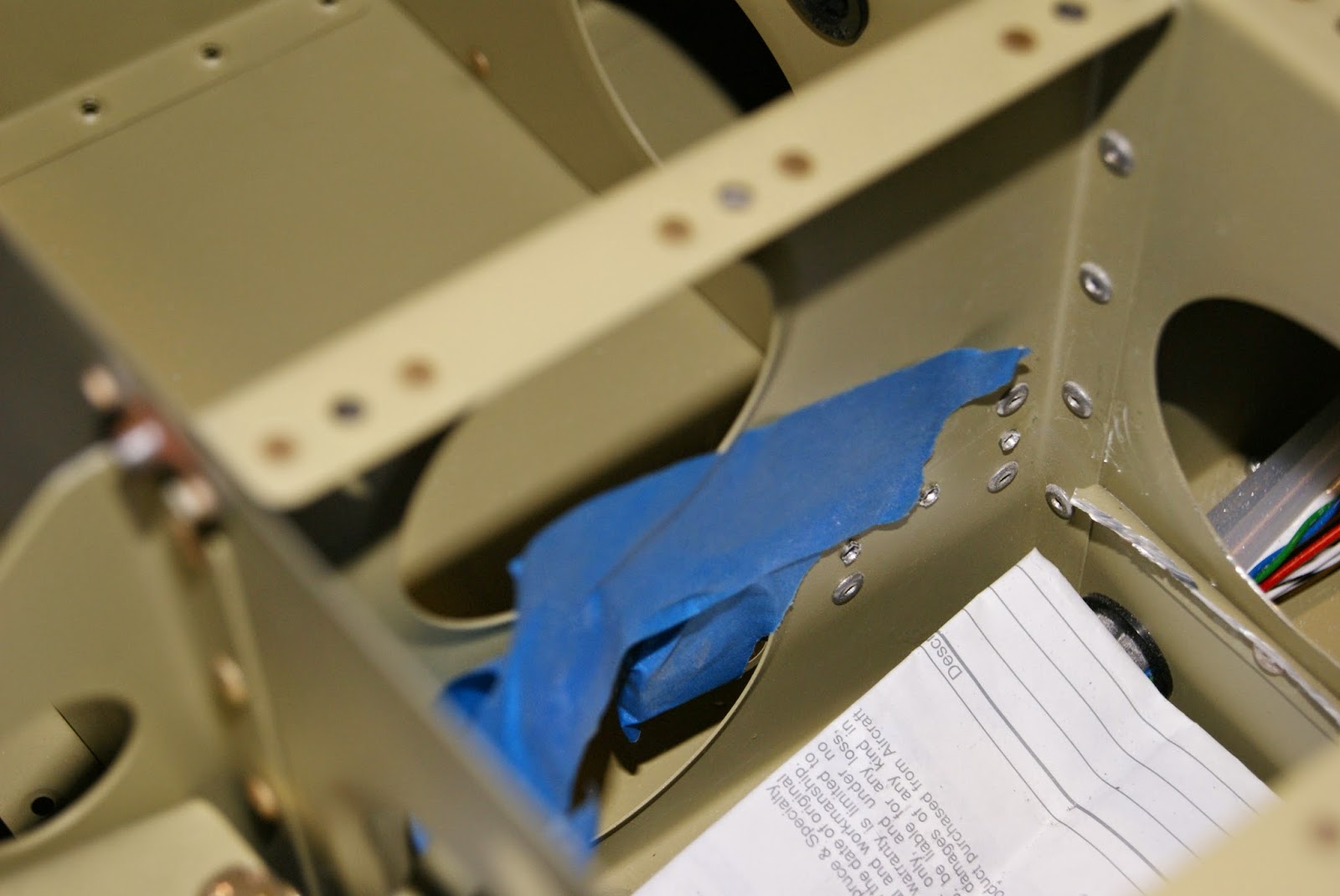 Left side of the F-1206F bearing bracket removed … the next task is to remove the three rivet shanks from inside the holes.

Only one of the six pop rivets came out of it’s hole easily … the remaining five are not budging. I remember they were tight going in, so suppose I will likely need to drill them out. I have a few things left to try … but have a #31 drill bit waiting in the wings if a complete drilling is necessary. Ran out of time to try things so will have to work things out during the next work session.