During the second test flight where the RV-12 was flown for over an hour and away from the home field’s traffic pattern, it was noticed there is a yaw component that needs addressed. To keep the airplane flying without yaw, it required a constant pressure on the right rudder. This is not unusual for a RV-12 without rudder trim … in fact, I would say it is the norm. As mentioned in a previous post, this was expected because I can’t remember seeing any RV-12’s at Oshkosh that didn’t have a trim tab or a wedge on the left side of the rudder. Van’s now has a trim tab available for the RV-12, but unfortunately it came out after the DOG Aviation RV-12’s rudder was completed.


A few weeks ago I ordered a bunch of goodies for the RV-12 such as a canopy cover, sun shade and a trim tab which will be installing now before the temperatures plummet … I wanted to use AKZO primer which is temperature sensitive, so instead of flying more at this time, we are spraying paint. The part number for Van’s trim tab for the RV-12 is R-01220 … the trim tab comes predrilled and pre-bent for the amount of trim that is typically needed at cruising speeds to achieve flight without yaw. 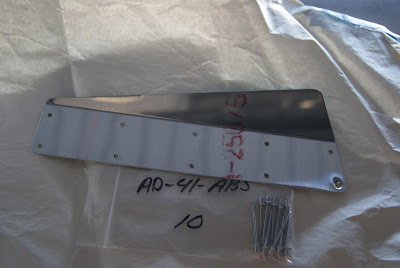 Installing the R-01220 trim tab on a completed rudder requires the removal of one rivet … the lower aft rivet on the left side on the rudder. Prior to removing the rivet and begin drilling, decided to prime the mating area first because the temperatures were forecasted to get much colder than would be suitable for the Akzo epoxy primer to cure properly. The trim tab was held in position and a line was traced around the trim tab so the area could be masked off and sprayed with primer along with the mating surface on the trim tab. 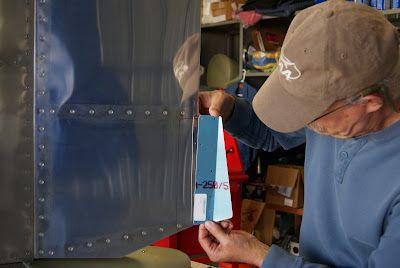 After placing the trim tab in position, a line was traced around it to denote the area that would require masking and scuffing with a ScotchBrite pad.


A one ounce batch of primer was mixed up and the RV-12 was rolled outside and the primer was airbrushed onto the rudder and trim tab along with a couple of other small parts that I want to install in the future. 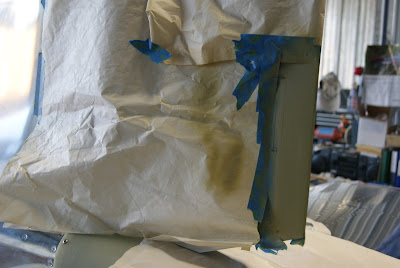 Akzo primer was airbrushed onto the surface of the rudder where the trim tab will be installed.


As mentioned above, the lower aft most rivet on the left side of the rudder requires removal so the mandrel requires being pounded out so the rivet can be drilled and removed. Those following the DOG Aviation Blog know flush rivets were used during construction, so the rivet being removed is a flush rivet … this will require dimpling the corresponding hole in the trim tab. All the remaining holes that will be drilled will NOT be dimpled because the rudder is now built and there is no access. Also, the rivets are so close to the trailing edge that there is not room for the dimple dies … so the trim tab will only receive one dimple where the flush rivet is being removed and the remainder of the rivets will not be flush. 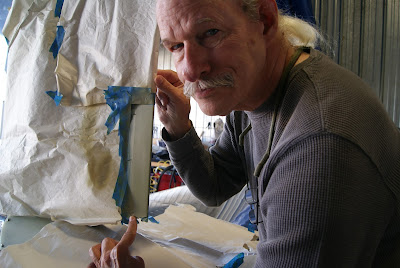 My finger is pointing towards the only rivet that requires being removed. This rivet hole is used to orientate the trim tap in the correct position while match drilling the remaining holes into the rudder. Because a dimple already exists here, the trim tab will be dimpled only at this location.


Not wanting to just pound on the rudder with a hammer while the rudder was on its stop, decided it best to ask for assistance … so asked Bernie if he could come by the hanger for a few minutes to give me a hand. Bernie held a rag covered block of wood on the right side of the rudder on the rib opposite of the rivet being removed. I used a hammer to pound out the mandrel in the center of the rivet using a mandrel from another rivet that was tapered on the end a little on a Scotch-Brite wheel. Once the mandrel was removed, the head of the rivet was drilled until it popped off so the remaining portion of the rivet could be pushed in clear of the rivet hole. After the rivet was successfully removed, the F-01220 trim tab was secured onto the rudder with a Cleco so the bend line on the trim tab could be aligned with the aft edge of the rudder. Once in position, the trim tab was taped in place so it would not move while drilling. 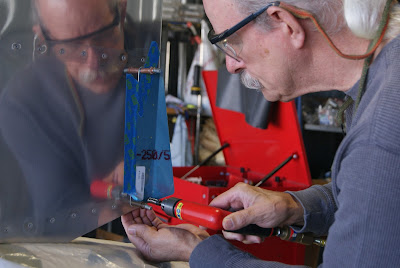 
After drilling, the rivet holes in the trim tab and the rudder’s skin were deburred. To install the R-01220 trim tab, the lone dimpled hole received a flush rivet and the remaining nine rivet holes received the AD-41-ABS rivets supplied with the trim tab. 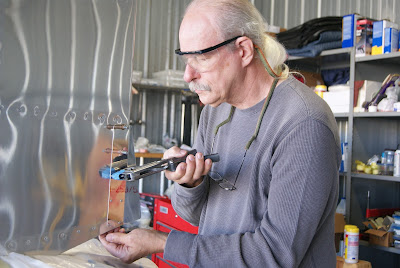 Using the hand rivet puller to rivet the F-01220 trim tab onto the RV-12’s rudder. The lower left hand rivet is a flush rivet because the rudder was already dimpled at this location … the remaining nine rivets are AD-41-ABS rivets. 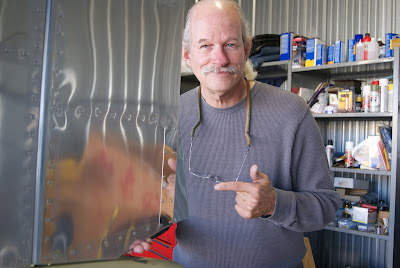