For the most part the last week has not been conducive to flying (nor will this week for that matter) so there has not been a rush to finish up the Reiff preheating instillation. Yesterday it was actually in the mid 50’s so decided to take advantage of the mild temperatures and head to the hangar and finish up the Reiff preheating system instillation on the DOG Aviation RV-12 … which at this point only requires installing the wiring.


Installing the wiring is very straight forward … the long wire with the Molex connectors at both end connects onto the wire from the Reiff  “HotStrip” affixed onto the bottom of the engine. The wire was routed adjacent to the aluminum tube for the fuel pump venting that traverses under the cylinders on the right side of the engine. 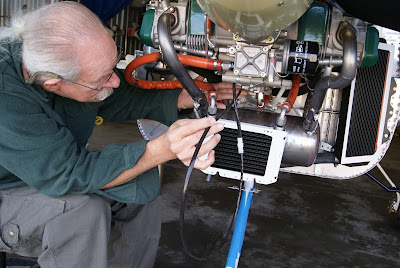 Routing the long wire with the Molex connector on both ends along the aluminum tube for the fuel pump vent.


The long wire was routed aft along the aluminum tube for the fuel pump vent. From there it then swings outward to follow the engine mount aft and upward at the rear of the engine alongside the oil tank where it follows the supply oil line over to the battery box area. The wire continues downward along the  side of the battery box/oil tank bracket where it plugs into a Y that connects to the main power cord. There is also a second Y that supplies power  to the thermostat that controls the temperature of the Reiff “HotBand” for the oil tank. 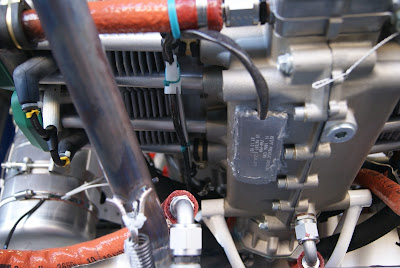 The path chosen for the wire to the Reiff “HotStrip” can be seen here wire tied alongside the aluminum fuel pump vent line under the right side of the Rotax 912ULS engine. 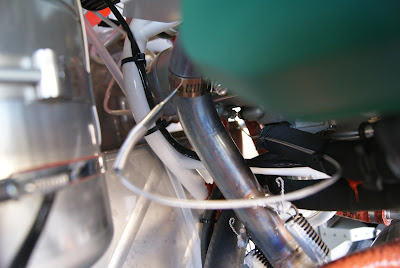 A photo of the routing along the aft portion of the engine where the wire is attached onto the engine mount with wire ties.


Van’s plans would have the builder drill two holes into the F-1201E-R oil tank side bracket so wire ties can be used to secure the electrical wiring. I was not fond of that idea because earlier RV-12’s developed cracks a little further aft of this location, which is why a second F-1201G brace was added. 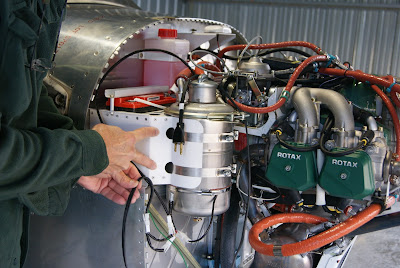 Van’s plans calls for drilling two holes approximately where my fingers are pointing so wire ties can be inserted and routed to the holes for the oil tank mounting band further to the right.


Not wanting to drill holes in this area required a little fudging around to allow the Reiff wiring to be secured to the side of the F-1201E-R bracket … finally decided to take a different path and used a wire tie run through the hole for the oil tank mounting band and around through the lightening hole in the F-1201G braces this was done at the top and bottom F-1201G braces. The down side of this is that the wire ties are at an angle and wanted to skew the wires so to correct that complication, another wire tie was then slid under the first wire tie at each location to give me a place to secure the wires which I decided to place in a slit vinyl tube. Two tubes were used at the top and bottom of the F-1201E-R side bracket. In order to be able to secure all three of the  Molex connectors together to improve the instillation, I loosened the “HotBand” and rotated the band so the screw for the band clamp is now on the outboard side of the oil tank … this allowed for more slack in the wire allowing the Molex connector for the “HotBand” to be grouped with the other two. 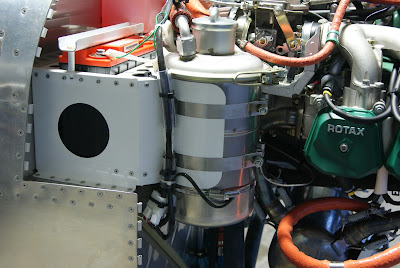 Completed instillation of the Reiff preheater wiring along the side of the F-1201E-R side bracket.


To complete the instillation, the power cord was routed so the Reiff preheating system can be plugged into AC power by opening the oil door and plugging the Reiff system into an extension cord. The power cord also has a ground wire that should be connected to a ground point. I elected to crimp a ring connector onto the ground wire and connected it directly onto the negative terminal on the battery. The AC power cord is plenty long so it needed to be fan folded and wire tied onto the supply oil line to keep things tidy. The  AC plug for the Reiff preheating system was left on top of the supply oil line and to the side of the oil filler cap on the oil tank. This location keeps the plug out of the way when checking the oil level in the tank yet allows the plug to be accessed through the oil door opening in the upper cowl when use of the Reiff preheating system is desired. 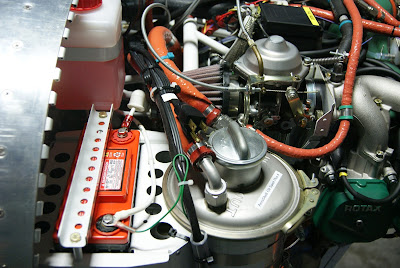 Upper view of the completed instillation of the power cord for the Reiff preheating system.


After the wiring was installed and secured, the Reiff preheating system was plugged into AC power for a test. No arks, sparks or smoke and no tripped breakers … a good sign. Both the “HotBand” for the oil tank and the “HotStrip” for the engine began getting warm …a job well done.
Posted by John at 5:47 AM