Decided to initially drill all the holes in the baffle using a #19 drill bit so  #8 hardware can be used to mount the baffle plate onto the shafts … however, when measuring for the holes, I used minimum edge clearances recommended for #10 holes just in case a switch is made to #10 hardware. As mentioned in the previous post, all the holes in the shafts were drilled to #40 so the baffle could be secured onto the shafts using Clecos …. but that didn’t work out because the Cleco pliers did not have enough clearance to install the Clecos with the baffle in place. Ultimately, a long rivet was used in the first hole drilled to hold the baffle position while a hole in the upper shaft was marked for drilling by hand spinning a drill bit in the hole. After drilling one of the holes in the baffle pate for the upper shaft, the assembly was put together using two rivets to hold positioning so the remaining four holes could be marked using the drill bit. 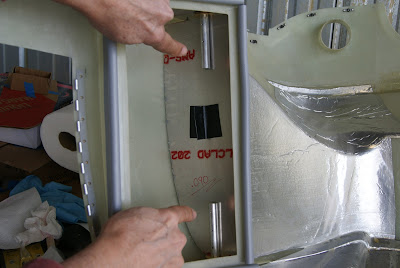 My fingers are pointing to the two rivets holding the baffle’s position so the remaining holes can be marked for drilling. 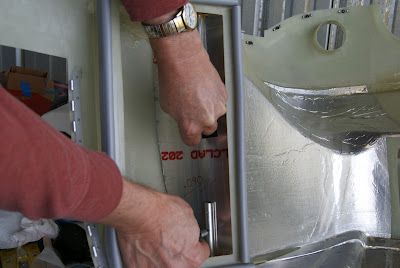 
Once the remaining holes were marked, the hole locations were center punched and drilled using a tiny drill bit to make a lead hole followed by a #40 drill bit. Next the assembly was secured with Clecos and match drilled on the drill press stepping up to a to a final size of #19 for #8 hardware. If at a later point it is deemed necessary to go with #10 screws, there is still enough material to do so. 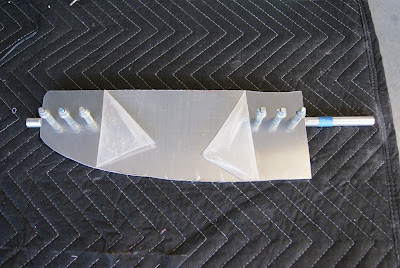 The baffle plate secured onto the upper and lower shafts with Clecos ready for match drilling to final size. Note the upper shaft is still quite long, this will be shortened when the exact position for the pivot arm is determined. 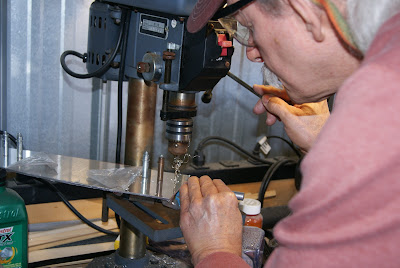 Using the drill press to match drill the baffle plate to the shafts with a #30 drill bit … during the next pass went to #19.


After drilling the holes with a #19 drill bit for #8 hardware, the assembly was installed in the air duct for a trial fit using some temporary hardware store #8-32 screws and nuts. All the parts for the baffle fit nicely together and the baffle has a good range of motion. 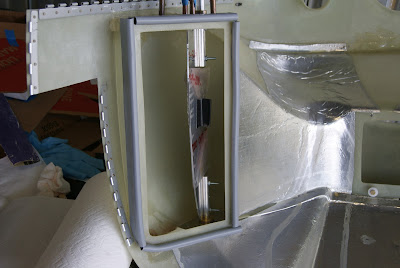 Test fitting of the baffle assembly in the air duct … baffle in the open position ... looking good. 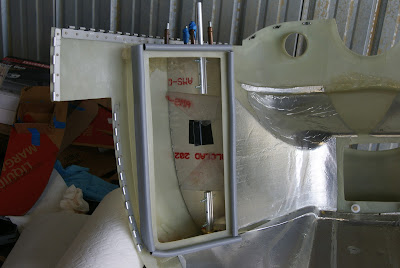 Baffle closed …. looking good but as one can see, there is very little clearance between the edges of the baffle plate and the fiberglass.


Even when the baffle is in the closed position, there needs to be some airflow … so it is suggested that when the baffle is in the closed position, there should be approximately 1/8" to 1/4" of clearance between the baffle and the air duct. Decided to go with 1/8" because the bushing flange and washer make the gaps at the top and bottom just under 1/4" anyway ... so figure if necessary, it is easier to remove material than put it back on. To mark the 1/8" gap on the baffle plate, a scrap piece of 1/8" aluminum was placed against the fiberglass sides and used to mark the outer edges of the baffle plate for trimming. The baffle plate was then removed and trimmed on the band saw. 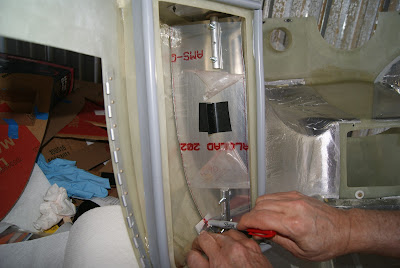 Using a scrap piece of 1/8" aluminum to mark the baffle for final trimming to create a 1/8" gap between the fiberglass and the baffle. The red cut line can be seen on both sides of the baffle plate.


Looking closely at the next photo one can see the results of the test fitting after trimming the excess material off the baffle plate. Now when the baffle is in the closed position, there is a 1/8" gap between the fiberglass and baffle plate. 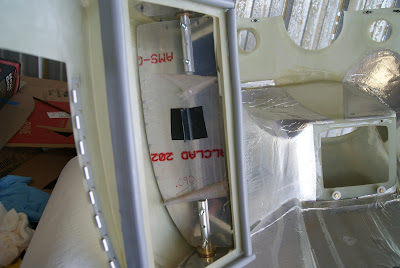 Now when the baffle is in the closed position, there is a 1/8" gap between the fiberglass air duct sides and baffle plate.