This work session began by using the cardboard baffle template to cut a piece of .090" aluminum for the baffle. Because the baffle will have a significant amount of wind pressure applied to it during flight when in the closed position, felt it needed to be of a thicker material even though mounting the voltage regulator onto the baffle will add a significant amount of stiffness. Decided to go with .090" aluminum which is also what Bender used for his original design. The baffle is still slightly larger than necessary, so it will need a little material removed from all the edges after the positioning  is finalized. 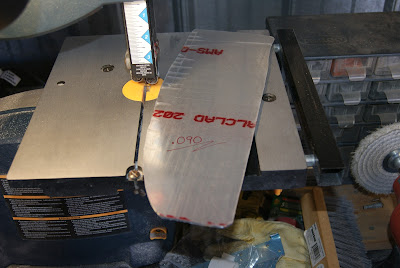 A piece of .090" aluminum was marked using the cardboard template then cut to size. A little additional trimming will be required all around once the final positioning for the baffle is established.


Now that the bushings are bonded in place and the baffle plate cut, moved on to making the two shafts that will slide into the bushings and secure the baffle. Felt it best to create a flat spot on each shaft for mounting the baffle … so decided on making a 3" long flat spot. This was accomplished by removing enough material to make a flat area for the aluminum baffle plate to mate onto. I think 3” is enough surface area for three holes and also keeps the holes within minimum hole edge distances (two times the hole size measured to the center of the hole based on #10 hardware). Now is the time it would be nice to have a milling machine … I see a lot of sanding/filing/measuring/repeat in my future.


The process for making the shafts began by using the band saw to remove a 3" thin strip of metal from the aluminum rod to create the beginnings of a flat spot. Next a belt sander was turned upside down and clamped onto the workbench and used to smooth down the flat spot enough to remove the scores left from the band saw. This was somewhat dangerous and NOT a method I would recommend …. but you work with the tools you have. I would caution about trying to use the belt sander to get to the final size ...  it is very easy to begin rounding the edges, so I just used it to get the beginnings of a smooth 3" long flat. To get to the finished size, required A LOT of hand filing and sanding with a sanding block until the final thickness of 13/32" was achieved … so basically 3/32" was removed from the rod. Oh, also used flat back riveting plate with sticky sandpaper on it to get the flat spot as close to perfect as possible. Seemingly, removing 3/32" leaves enough of a flat spot for good support for the baffle plate, yet leaves the shaft thick enough to support the three mounting holes that will need to be drilled. 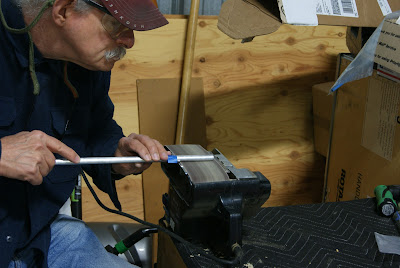 Using the belt sander to begin smoothing the roughness left from the band saw. 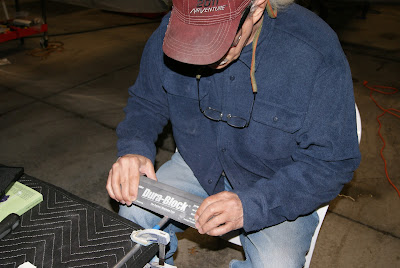 After a little hand filing and use of a sanding block and a flat back riveting plate covered with sandpaper, a uniform final thickness of 13/23" was achieved. 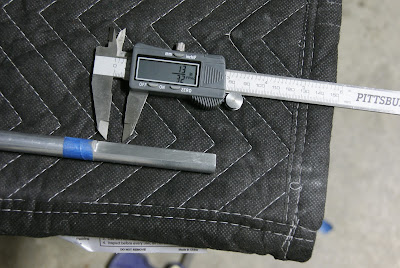 The finished flat spot ready for drilling the mounting holes. As one can see, the shaft thickness at the flat spot measures 13/23". One down, one to go.


After completing the 3" flat spots on both shafts, the three mounting holes for each shaft were marked and drilled to #40. The actual final assembly will begin with establishing the correct positioning of the baffle while in the closed position and drilling one of the mounting holes in the baffle. Because brass washers will be used between the bushings and baffle, a little excess material will need to be removed from both ends of the baffle to establish the correct spacing. 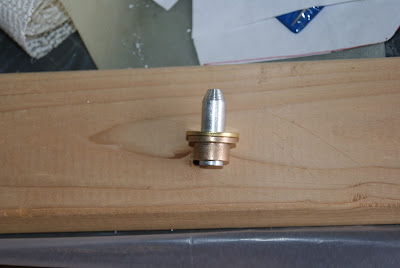 A brass washer with a 1/2" hole in it will be used between the baffle and the bushings.


The goal was to first establish the fit of the bottom shaft first … then strive for a snug fit to the upper bushing with a minimum amount of up and down play by trimming the upper edge of the baffle to achieve a non-binding fit to the upper washer/bushing that just has a very small amount of vertical movement. This is the reason why the cardboard baffle template was left a little long … it insures the capability of being able to make a snug fit. Prior to cutting the lower shaft to length, some measurements were made based on 3" for the flat spot, 3/32" for the brass washer, 1/2" bearing depth plus 1/8" + excess at the bottom of the bearing … so the lower bushing shaft was cut to a length of 3 24/32". 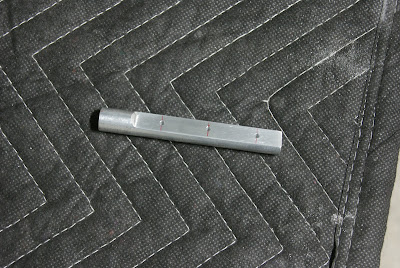 Completed lower bushing shaft with #40 holes drilled … The #40 holes will be enlarged later to accommodate the mounting hardware either #10 or #8 ... haven’t decided just yet.


My game plan did not work quite as envisioned: My initial thought behind only drilling the holes to #40 at first was … mark the first hole to be drilled into the baffle by inserting a #40 drill bit into one of the holes in the lower shaft then spin the drill bit by hand to leave a mark on the baffle so a #40 hole can be drilled in the baffle. Once the first hole is drilled, the plan was to secure the baffle onto the shaft using a stubby #40 Cleco to hold positioning so the remaining holes in both the upper and lower shafts could be marked, then drilled in the baffle. The roadblock I discovered was due to the shape (angle and length) of the handles on the Cleco pliers …. the handles on the Cleco pliers hit the side of the cowling long before allowing even a stubby Cleco to be inserted into the hole in the baffle. Ultimately, a long #40 rivet was used to hold the alignment of the baffle on the lower shaft. 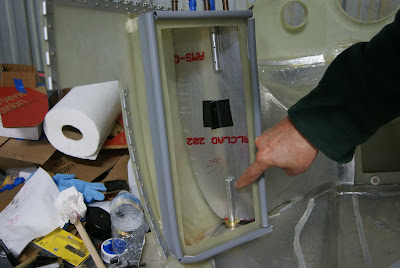 Baffle plate in place with the upper hole on the lower shaft drilled into the baffle. Looking good so far it is starting to come together and look like a baffle assembly. Due to the clearance issues mentioned above, used a long #40 rivet at the location my finger is point towards as a pin to hold positioning so the remaining holes can be marked ... it can be seen if one looks closely at the photo.


Before drilling the holes for the upper shaft, the top edge of the baffle will require a little more trimming to accommodate the brass washer.  This seemed like a good place to quit for the evening.
Posted by John at 7:31 AM