Work resumed on the under the panel mounting bracket for the baffle’s control knob by trimming the excess material off the bracket and establishing a curved shape as can be seen in the photo below. Once the final shape was established, I asked Bernie to swing by the hanger so I could sit inside the cockpit and locate the final mounting position for the control cable bracket. With Bernie’s help holding the bracket under the instrument panel base, I verified there was enough clearance for my fingers. Once the general position was established, a piece of masking tape was placed alongside the bracket to mark its position. Next measurements were taken based on the piece of tape to verify the rivet holes that needed to be drilled would not go into the flange on the F-1202H-L canopy rib or into the AV-5000A Control module. Now certain the mounting holes for the bracket would miss the areas of concern, the holes in the bracket were match drilled into the instrument panel base and the bracket was secured with Clecos.  Because the control cable is more or less in alignment with a manufacturing tooling hole already in the firewall that was previously filled with Proseal, rather than drill another hole, decided to just scrape away the Proseal and run the cable through the existing 3/16" tooling hole. During the final instillation, a silicone grommet will be installed in the firewall so the tooling hole will need to be drilled slightly larger to accommodate the grommet … but for the trial fit, the Bowden cable was just slid through the tooling hole after the Proseal was removed. 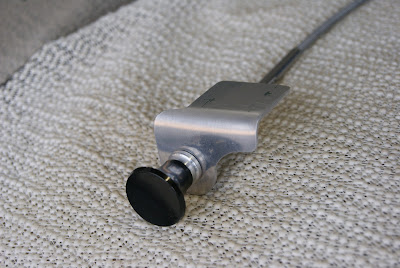 Final shape for the control cable’s under the panel mounting bracket. 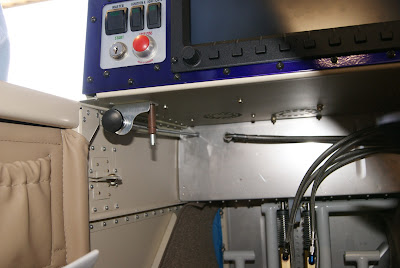 
With the control cable/bracket assembly Clecoed in place, Bernie gave me a hand installing the lower cowl so the firewall forward positioning of the control cable could be established. Once again, the control arm was temporarily clamped onto the baffle shaft so the overall range of movement could be verified. Not wanting to cut the Bowden cable just yet, decided to just make a loop at the end of the cable and slip it over the cotton swab stick shown in the previous post (Part 6).  It was at this point that I created a problem for myself which ultimately lead to my remaking the control arm. While testing there appeared to be some cable play or slop (the cable was still 6 foot at this point) so I drilled the mounting hole based on the amount of slop so there would be full range of motion. However, as it turned out, after the control cable was cut shorter to its final length, virtually all the slop went away and the full range of motion occurred long before the 3" pull of the knob (think it was 2 3/8") so decided, screw it, I’ll scrap the control arm … but not before drilling a second hole for the B Nut at the 1 7/8" point where previous measurements determined it should be. This worked out great, so I fabricated another control arm and also changed the design as well. 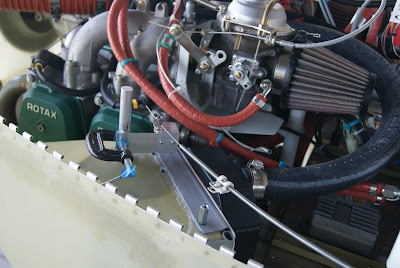 Test fitting of the control cable to the old control arm. Note: the hole for the B Nut was incorrectly drilled based on the slop that occurred when the cable was at its full length. After this photo was taken, another hole was drilled at the 1 7/8" point and all was well with the overall baffle movement. So a new control arm was fabricated.


The silver coupler that can be seen in the above photo will be used to mount an Adel clamp that will be used to secure the control cable. Not sure of the exact position for the coupler yet, but it will likely be installed approximately in the vicinity it is currently standing. The plan is to place another Adel clamp under the coupler which will secure the wiring bundle that will run to the voltage regulator that is going to be installed onto the baffle plate.


Knowing the trial fit using the actual control cable would work, decided to fabricate another control arm. This time the control arm was fabricated from a flat piece of .063 aluminum that was hand bent using seaming pliers to form a 90 degree angle. Next the control arm was shaped to remove excess material and matched drilled to the two #19 holes that were VERY carefully drilled in the baffle shaft. Next the mounting hole for the B Nut was drilled in the control arm at a point 1 7/8" out from the center of the baffle shaft. The lower cowl was set in place and the overall  baffle operation was tested using the new control arm. The control knob in the cockpit was able to easily move the baffle from stop to stop within its 3" range of motion. 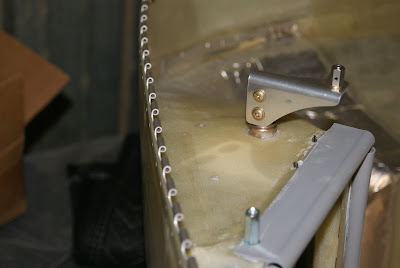 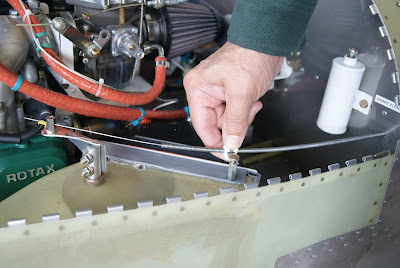 Final test fit of the remade control arm with the baffle in the full open position … the B Nut is located at a point on the control arm 1 7/8" from the center of the baffle shaft. This allowed for full baffle movement from stop to stop with just under a 3" pull of the cable knob (think it was around 2 7/8"). This is just what I was hoping for because the control knob has detents that end at the 3" point … so although the control knob is being operated near its limit, it is still within a normal range of movement. I'm holding the cable on the coupler that will be used as a cable support post. 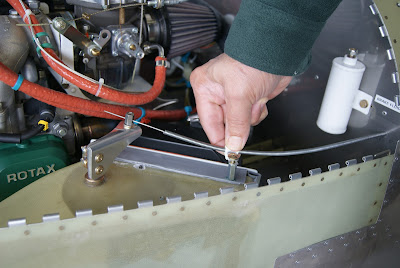 Final test fit of the remade control arm with the baffle in the fully closed position.


With the baffle control components now completed, figure may as well go ahead and prime all the baffle parts as well ... especially since everything else on the RV-12 is primed . I also have some other parts for upcoming changes that also need prepped and primed ... so the next couple of days will be spent readying a batch of parts to make a priming session worthwhile.
Posted by John at 4:18 PM