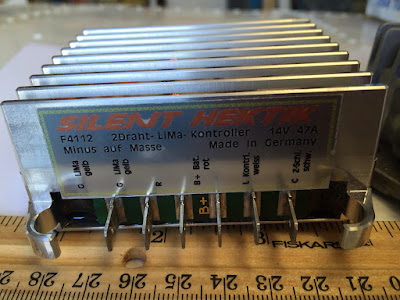 This is a photo of the F-4112 regulator with the spade leads … it is the direct replacement for the Ducati regulator.  Note that the fourth terminal from the left is labeled as … B+ Bat. 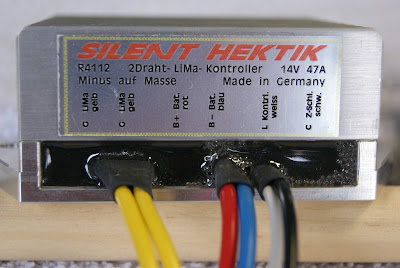 This is a photo of the R-4112 regulator the DOG Aviation procurement department received from England… however, it is the version that has wires. Note the label shows the fourth wire from the left is labeled as … B- Bat …. Not good.


I’m assuming having two very different versions of the regulator sharing the same  base part number must have created quite a bit of confusion. Perhaps it is why Silent Hektik changed the part number to F-4118 for the regulator with the spade terminals … and now the one they recommend on their WEB site as a replacement for the Ducati regulator on Rotax912/914 engines. The new F-4118 regulator IS the one we want to install as the direct plugin replacement for the Ducati regulator. It also has some nice features that will be mentioned below. If you have one of the F-4112 regulators with the spade leads you should be OK,  just check that the sticker above the terminals says B+ Bat and NOT B- Bat.  Just be sure NOT to use one of the regulators with the wires because it IS NOT pin for pin compatible with the RV-12’s wiring for the Ducati regulator. 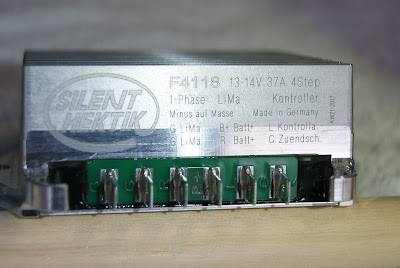 As can be seen in the previous photo, the spade leads on the F-4118 regulator are marked as G G R [B+ Bat] L C which is what we want as a direct replacement for the Ducati regulator. The F-4118 regulator also has an added built-in feature of a four stepped voltage output ... so it can be used not only on lead acid batteries, but also on AGM and Ion batteries as well … both of which benefit from the voltage stepping. The voltage stepping ranges from 13 to approximately 14.3 volts in four steps spaced at approximately 9 minute intervals. 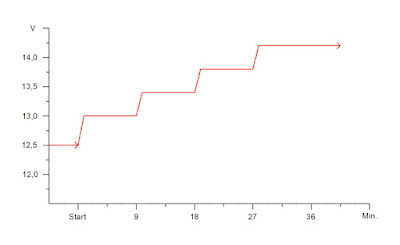 Photo of a charging graph obtained from the Silent Hektik site showing the charging steps for the F-4118 regulator.

Also of note, it appears to me the F-4118 regulator seems better suited for an aircraft instillation than the R-4112 regulator … in that, the regulator appears to be sealed much better from the elements. The R-4112 regulator has a seam running around the regulator because it is assembled from two machined aluminum halves which appear to have no gasket or sealant to make the seam water resistant … also, there are exposed tiny threaded screw holes between the fins that are used to mount internal components. The seam and the tiny holes would have required an application of a thin bead of high temp silicone to help make the regulator water resistant. However, the construction of the new Silent Hektik F-4118 regulator is very different … in that, there is no mating seam or threaded mounting holes between the heat sink fins. The F-4118 regulator is beautifully machined from one solid billet of aluminum and the circuitry is inserted into the body of the regulator from the bottom and has an aluminum cover plate which appears to be potted in place … the regulator is seemingly sealed very nicely with potting resin. At first I was a little disappointed that the new F-4118 regulator did not have a smooth flat bottom as there is on the R-4112 regulator (which should offer great heat transfer performance). But with the regulator installed in the lower cowl's air duct, there will be an abundance of cooling air flowing past the regulator’s fins at all times ... so excess heat should never become a performance issue for either regulator. The way the new F-4118 regulator case is made from one piece of aluminum and nicely sealed with potting resin made me quickly forget about having a solid flat bottom on the regulator. 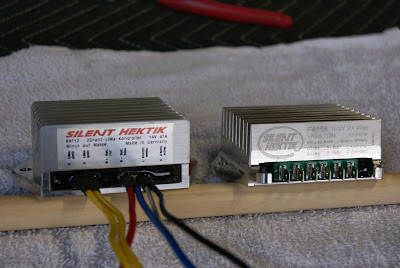 The Silent Hektik R-4112 regulator (with wires) on the left and the new F-4118 regulator with spade connections on the right. 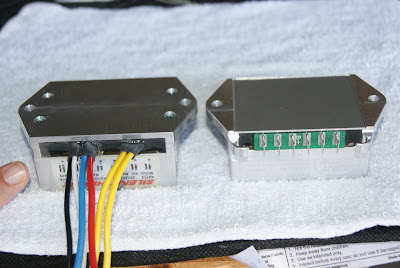 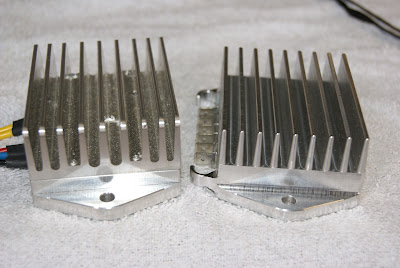 As can be seen, the F-4118 regulator on the right has no seams or holes protruding the aluminum. The same can not be said for the R-4112 regulator on the left which one can see has at least five or six threaded screw holes between the fins for mounting internal circuitry. 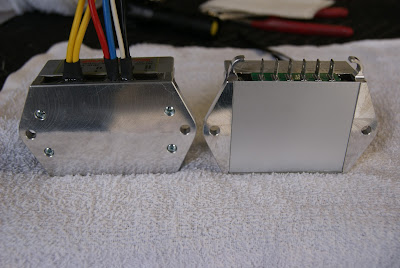 View of the bottom of the regulators. The new F-4118 regulator on the right has the control circuitry inserted from the bottom and sealed with a potting resin. The R-4112 regulator on the left has a nice flat bottom which I would prefer … however, the fact there are no screw holes between the fins or seams on the body of F-4118 regulator coupled with a nicely sealed potted base scores more points in my book for an aircraft instillation.


The next post will cover working out some of the wiring details and dilemmas … plus, the changes that needed to be made when it was discovered the wired version of the R-4112 regulator would create issues.
Posted by John at 10:03 AM