The base paint color chosen for the DOG Aviation RV-12 is an off-white (not quite as dark as I would have preferred). When looking at color chips for a creamish off-white that leans towards brown, I found an off-white that was a tad lighter than what I wanted and the next darker paint chip seemed too dark for my liking so I went with the lighter off-white. Not wanting to step into the world of custom mixed paint, decided to just go with the lighter off-white color. Sure, could have opted for a custom mix … however, should a touchup be required in the future, hopefully having chosen a standard color from the color chart will result in a closer match. Interestingly, when looking at the paint for the first time after it was sprayed, it seemed really white to me … however, when compared to a bright white airplane just painted at the shop with Matterhorn white paint, it is truly a darker creamish off-white color. 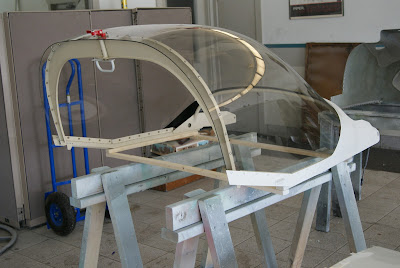 Painted canopy sitting on the wooden canopy frame I made specifically for this purpose (mentioned in the previous post). The wooden frame keeps the thin edges of the canopy skirts that protrude below the canopy frame off the saw horses … this prevents the skirts from becoming bent and scraping paint off the fuselage where the canopy overlaps. 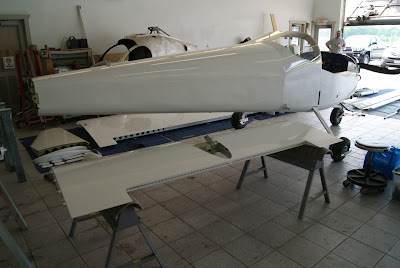 Fuselage and stabilator ready for reassembly. 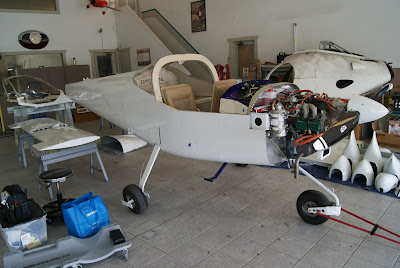 Side view of the fuselage from the front. 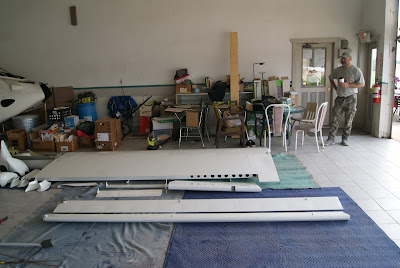 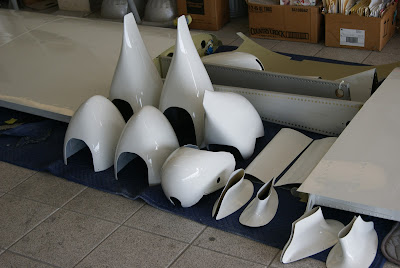 Jeff wanted me to begin assembly of the tail section so it could be masked off for the accent trim colors while on the airplane. This will involve reinstalling the vertical stabilizer and horizontal stabilator along with temporarily pinning the rudder in place. The rudder will receive the accent colors while off the airplane. The wings will also be attached so masking can be applied to the fuselage and the wing tips for the trim colors. 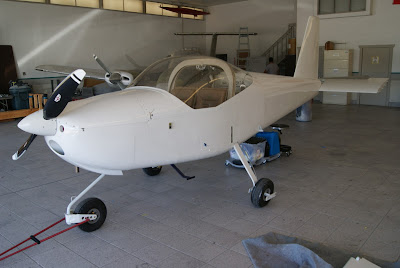 Note to fellow RV-12 builders: Those that have completed the service bulletin for the bearing bracket on the stabilator will discover that attaching the stabilator onto the tail cone is a tougher challenge now. A few suggestions … grind down two AN4-12A bolts to remove the threads and put a small taper on them so they can be used as “pins”. Raise the nose wheel and place it into one of the holes in a standard concrete block. Tape really thin foam wrap sheets onto the side of the fuselage to prevent scratches. Place the stabilator onto the 25” saw horses you made to prop up the fuselage … the alignment will be close enough to work with. Have two helpers hold each end of the stabilator and insert the counter weight into the fuselage and slide the stabilator forward so the counterweight arm bolts can be installed. Carefully move the stabilator forward and in position. Forget about installing the washers on either side of the bearings and just temporarily use the tapered bolts to “pin” the stabilator in place. At this point, only one person needs to hold the stabilator in position as each “pin” is removed one at a time and replaced with the AN4-12A bolt and the required washers. I would suggest wearing a miner’s light (preferably one with an incandescent bulb to reduce glare) and use a comfortable creeper … you will be on your back for quite a while. If you don’t have a washer holding tool, use painters tape to tape each washer onto a thin metal ruler and slide the washer in place and slip the bolt through it. It sounds easy … but it is not … IT IS an exercise in patience … lots and lots of patience. Frankly, I think this is one of the toughest tasks to perform on the RV-12 … it is amazing how difficult inserting two bolts through two bearings and four washers can be. I also found using a small piece of vinyl tubing with a wire tie wrapped around the bolt and back through the tubing made for a very easy way to hold the bolts for initial insertion into the holes in the bearing brackets. I've installed the stabilator three times now and although it has become somewhat easier to do, it is not a task that can be done quickly … at least not for me. 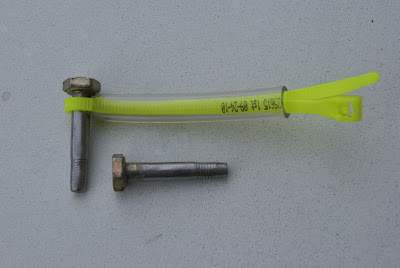 Two AN4-12 bolts that have had the threads ground off and a slight taper placed on them so they can be used as “pins” to quickly get the stabilator in position without worrying about the washers on either side of the bearing. Once the stabilator in position, the “pins” are pulled one at a time and replaced with a threaded AN4-12 bolt and the appropriate washers. The vinyl tubing and wire tie shown makes a great tool for holding the bolts for insertion into the bearing bracket assembly since there is really not much room for a hand.


After the tail section was installed, work began preparing the wings for installation. The wings were placed in the wing cradle and the flaperons were attached to each wing. 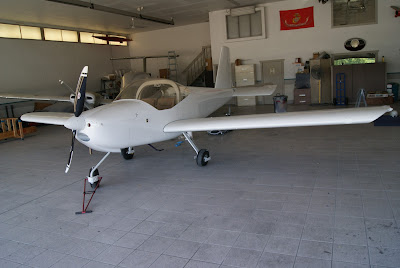 
In the past, I’ve used a couple of pieces of metal bent into a" V" and taped  them onto the outer edge of the wing and flaperon with duct tape to secure the flaperons from moving while the wings are off the airplane. Not long ago I read a post on the forums where a guy suggested using a welding rod inserted through the very aft edge of the wing and slid into the aft portion of the flaperon to capture it. This worked really well … and I can wholeheartedly recommend using this method to secure the flaperons during wing removal/instillation. 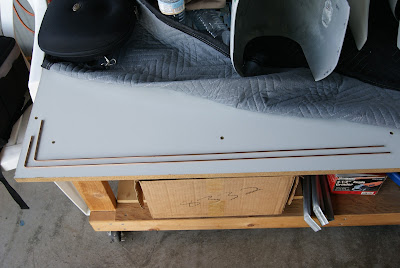 Two welding rods with 90° bends on at the ends makes it easy to lock the flaperons for wing instillation/removal. 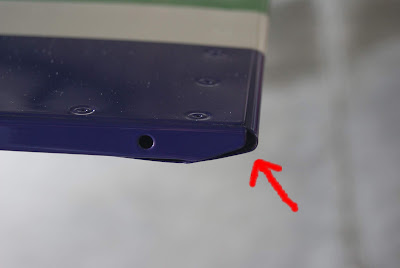 As can be seen in this photo, the aft edge of the outboard portion of the wing has a gap just large enough to insert a welding rod. 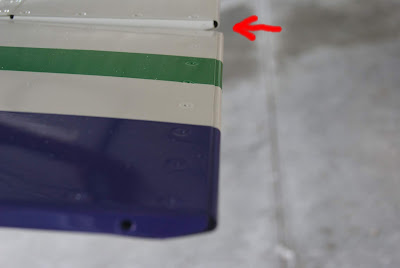 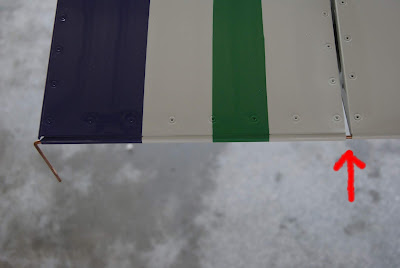 The next step involves Jeff interpreting a picture made of my desired color scheme which I overlaid onto a photo of a RV-12 using a photo editing program. Jeff will use the edited picture as a reference for applying the masking for the trim colors and N numbers. When the masking is completed, the two trim colors will be applied to the DOG Aviation RV-12.