Last fall, I inquired with a local aircraft paint shop about scheduling the DOG Aviation RV-12 for a long overdue paint job. At that time, I was told that the shop was booked until spring … probably the first week in April so went ahead and put my name on the list. Due to some unforeseen delays, my early April timeslot got pushed back to mid-May.  But two weeks ago finally got the call … bring the RV-12 over to the shop. (Yeah, two weeks ago … I've been a little late in posting).
Fortunately, the following morning the weather cooperated and although thunderstorms were forecasted, it was for much later in the day. Decided to take advantage of clear, relatively calm morning and fly the RV-12 to the paint shop. The stars aligned … not only was the morning a great morning for flying, but the owner of a Mooney the next hangar row over offered to fly over to the paint shop and shuttle me back home. Thanks Don ... much appreciated, and my first ride in a Mooney! As it turned out, after dropping the RV-12 off at the paint shop, I offered to buy breakfast … so Don headed to Carrol County airport for a good breakfast at the restaurant there.
The paint shop chosen to paint the DOG Aviation RV-12 is Custom Aviation at Portage County airport. There is a gentleman at my home field that is constantly buying and selling used aircraft and he uses Custom Aviation exclusively to either completely repaint, add trim or touch-up paintjobs on the aircraft he purchases. So over the years, I’ve seen quite a few airplanes that have been painted by Custom Aviation and the work has always looked quite nice. Another reason Custom Aviation was chosen is their willingness to let me enter their facility and perform the disassembly and assembly of the airplane. 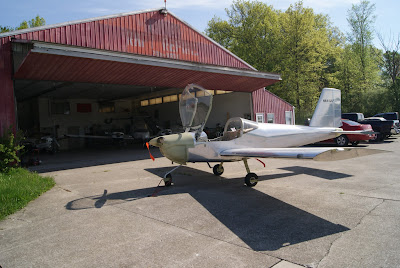 The DOG Aviation RV-12 about to be taken inside the hangar for a long awaited for paint job.
Custom Aviation began work on the RV-12 by doing an acid wash followed by scuffing the metal so the primer will get plenty of tooth. I was told it is easier for them to do the acid wash and scuffing with the airplane assembled then when parts come off the airplane, it only requires minor tweaking to get the parts ready for primer. After about a week, I got the second call … the RV-12 was ready for disassembly. 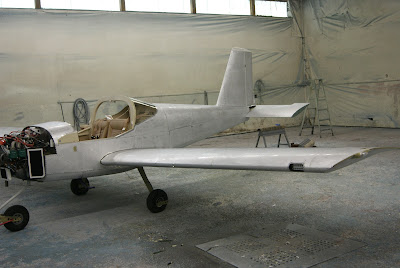 Side photo of the RV-12 after the acid wash and scuffing. The canopy was just removed prior to taking this photo. 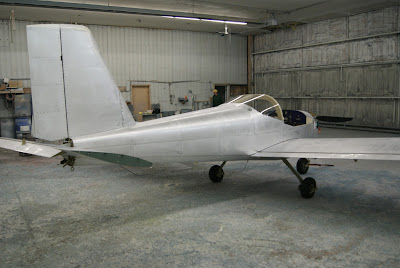 Aft view of the RV-12 after the acid wash and scuffing.
NOTE TO FELLOW BUILDERS ABOUT CANOPY REMOVAL. It has been reported more than once that the side skirts on the canopy (most all RV models) can easily become bent during the painting process and subsequently scrape the paint on the fuselage when the canopy closes. This is because the thin metal skirt that overlaps the fuselage when the canopy is in the closed position can become deformed from all the weight of the canopy assembly pushing down on the thin metal edge contacting the saw horses. To mitigate that issue, I cobbled together a wooden frame that allows the canopy frame to sit on the wood keeping the canopy side skirt off the saw horses. Unfortunately, I forgot to take a photo of the wooden frame … but it is trapezoid shaped because the forward portion of the canopy frame is narrower than the aft portion.
Admittedly, it sucks to disassemble the airplane for paint … but necessary if one wants complete protection for those surfaces that are inaccessible if the aircraft is left intact during the painting process. I know there are quite a few builders that paint the aircraft prior to assembly  and that is something I would truly consider if doing it again … especially if an aviation paint shop were nearby or an auto body shop willing to paint parts during off hours.
Although heartbreaking, the DOG Aviation RV-12 was completely disassembled … wings removed and flaperons separated from the wings, canopy and upper forward fuselage skin removed, inspection port covers removed, horizontal stabilator removed and anti-servo tabs separated along with the removal of the rudder and vertical stabilizer. 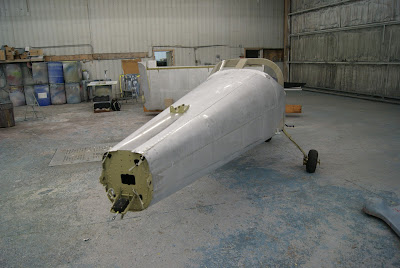 As one can see in this photo, the untouched aluminum under the vertical stabilizer is quite smooth and shiny compared to the rest of the airplane. If the vertical stabilizer were left on the fuselage that large area would not be protected by paint.  That area will be hand treated prior to primer and paint.
I’ve decided not to paint the screws … over time, the paint begins to chip and look nasty so will just go with unpainted stainless hardware. The only screws that will be left on the fuselage are the screws on the turtle deck securing the rear window in place …probably should have removed that as well … but elected not to. The canopy screws will also end up being painted as well. 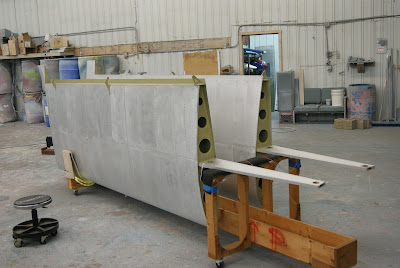 The flaperons were removed from the wings while sitting in the wing stand. Of note: Because the wing spars are anodized, the decision was made not to paint the spars. I figure the spars can always be hand treated later with CorrosionX for long term protection. 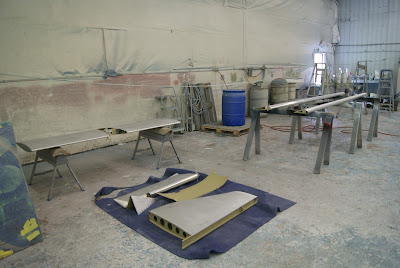 Parts removed from the fuselage consisting of the two flaperons on the far right, and back to front … the stabilator, rudder, vertical stabilizer forward skin, upper forward fuselage skin (one with the curve) and the vertical stabilizer.
Just got the call today that the main portion of the airplane is primed and painted so reassembly can begin. The paint shop prefers having the airplane assembled prior to beginning the masking for the trim accent colors … need to head up to the paint shop tomorrow to begin reassembly. We are at the two week point now … so things are moving along nicely.
Posted by John at 6:44 PM