RV-12 owners (and probably owners of most Van’s aircraft) know once wheel pants are installed, it becomes a real pain to check tire pressures. The wheel pants cover the majority of the tires, leaving absolutely no access to the air valves … thus requiring the removal of the wheel pants just to check tire pressures. Sure, some have drilled holes in the wheel pants for access … but then trying to perfectly align the air valve stem with the hole is a pain … plus, it makes it very difficult to use the protective valve stem caps ... so the caps are typically left off which allows crud to get into the valve stem. Hindsight being 20/20, I should have taken a little more time with the wheel pants and installed a hinged access door with a Camlock fastener or two. 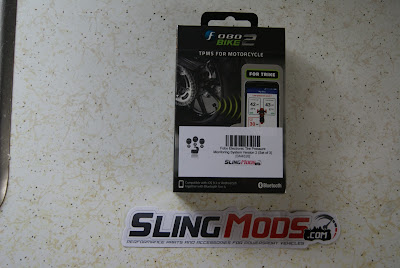 
The FOBO monitoring system for trikes includes three sensors which screw onto the tire’s valve stem. Included are three lock nuts that can (if desired) be screwed onto the valve stem and cinched up to the back of the sensors to lock them in place … a convenient special molded wrench is supplied for tightening the lock nut up against the backside of the sensors. Also included in the kit are three backup batteries (standard CR1632 coin/button batteries) and three short valve stems for use with tubeless tires. 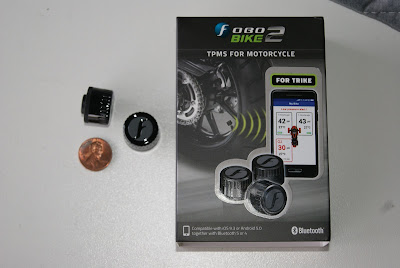 As can be seen in this photo, the FOBO sensors are actually quite small, about the size of a penny.


The FOBO sensors themselves are quite small (as can be seen in the above photo) and only weigh 7.6 grams … probably not  enough weight to worry about rebalancing the wheel, but I'll be sure to be on the lookout for take off or landing vibrations. The life span of the replaceable CR1632 battery is 1 year. Battery replacement is easy … the top screws off the sensor and the old battery is slid out of a holder and new battery slid in, piece of cake. The sensors support both Bluetooth versions 4 & 5, which is how they report to the free FOBO App. The free FOBO App supports Apple’s iOS 9.3 operating system and Android version 5.0 or later. I installed the FOBO App on my smart phone (which is running Android version 10) without running into any issues. The FOBO App is full featured allowing the user to select wheel configurations, set pressure high and low alarm points, altitude compensation, etc. and share the settings with another device or user. As a deterrent for theft, the FOBO App registers the sensors with FOBO … so if the sensors are stolen, they will not work on another vehicle.


First time setup is easy, after the desired wheel configuration is selected, the App will tell you when to install each sensor so it can be paired with the FOBO App and registered online with FOBO. This part of the process takes a few moments as the App scans, pairs, then registers the sensor. After the sensors are paired, they immediately begin updating the FOBO App with each tire’s pressure reading,  current temperature and sensor battery status. As previously mentioned above, entering the settings page will allow editing the settings for optimum tire pressure and to set high and low pressure alarm points. 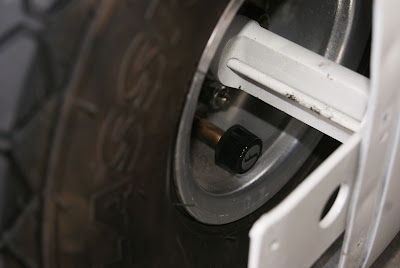 Photo of a FOBO tire pressure monitoring sensor installed on one of the main gear’s wheels. 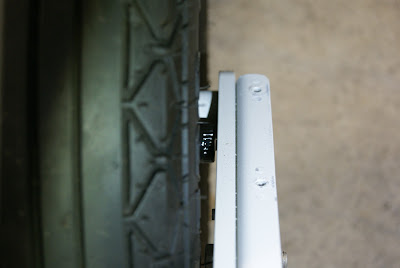 After filing down the shop heads of the two rivets a little, the sensor cleared the rivets as can be seen here if looking closely …  but just barely. Clicking on this photo should bring it up to full size making it easier to see. 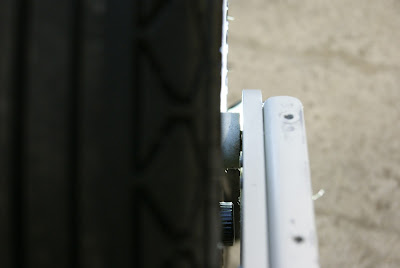 Looking very closely, one can see loosening the axle bolt created about a 1/16" gap between the U-01210B-1 spacer and the WD-01230-1 wheel fork … just what I needed, the spacing washer was inserted into that gap. 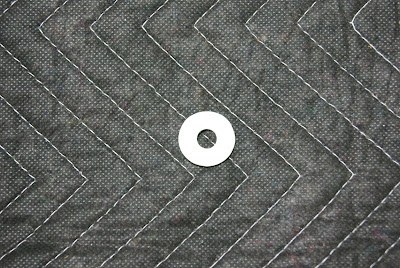 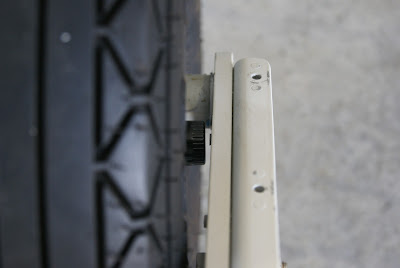 Photo of the nose wheel assembly with the washer in place. Now the wheel assembly is offset 1/16" to the right creating clearance between the FOBO sensor and the rivets that secure the U-00006E-L-1 mounting bracket.


The FOBO sensors appear to be working nicely and sensitive enough to track pressure differences caused by temperature changes …. in that, reported tire pressures are slightly higher during a hot afternoon compared to the cooler mornings. The FOBO App works great and if selected in the setup menu, can also sound an alarm on the device you are using should any tire pressure go beyond the user assigned normal operating range. Below is a photo showing what the FOBO App display looks like after a front wheel trike configuration was selected, sensors installed and pressure limits configured. If a tire’s pressure is out of range, the FOBO App will display a red background for the offending tire. 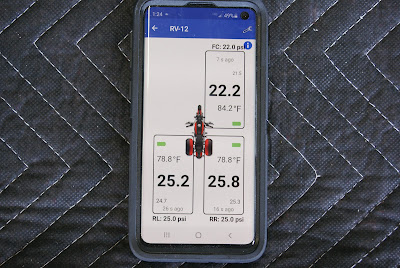 Photo of the FOBO App on my smart phone after installing the sensors and configuring desired parameters in the setup menu.


Thus far, I’m very pleased with the FOBO sensors … they appear to be accurate and the FOBO App is easy to install and configure. Time will tell if the sensor battery lasts to the one year point … hopefully it will so it can be routinely changed during the yearly condition inspection. At this point the FOBO sensor system appears to be a good option for those pilots who don’t want to remove the wheel pants just to make a tire pressure check. Moving forward, I’ll be sure to update this post if any issues develop with the FOBO sensors. Oh, at the time of this writing, the FOBO sensors cost around $49 per wheel.
Return from the future:
The clearance that was created between the FOBO tire pressure sensor and the nose wheel fork proved to be not enough. As previously mentioned above, I had to press quite hard on the sensor to deflect the tire’s valve stem enough to contact the nose wheel fork assembly. After completing some high speed taxi testing and checking it appeared all was well.
Not so! Apparently, the centrifugal force created by the 5” nose wheel instantly ramping up from 0 to 25 or 30 MPH must be very significant. After shooting a couple of touch and go landings, I returned to the hangar and inspected the sensor and found, much to my amazement, there was evidence of contact with the nose wheel fork assembly … so the nose wheel sensor  was removed from the nose wheel.
Guess I will have to check the nose wheel pressure the old way from now on. At least the sensors are working well on the main gear and the main gear wheel fairings are much more time consuming to remove.
Posted by John at 5:59 PM