Entering and exiting the RV-12 is not hard or extremely awkward for the pilot or passenger but there are places one naturally wants to place their hand for support such as on the F-1254 roll bar support frame. In some instances, applying body weight to the F-1254 support frame has caused deformation of the support frame or an outright kinking and bending of the metal. 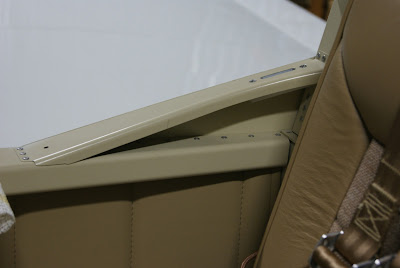 The F-1254 roll bar support frame is the angled piece in the photo that also has a slot for capturing the canopy’s C-1206 guide plate. As can be seen in this photo, there is a large unsupported area adjacent to the seat which is right where there is a natural tendency to place a hand for support when entering or exiting the RV-12.

Builders have come up with various clever methods of stiffening the F-1254 support frame but when Van’s changed the RV-12’s fuselage design to support the Rotax 912iS engine, they also designed a stiffener that can also be used on a legacy RV-12 fuselage, which the DOG Aviation RV-12 has.

I’ve known about this weak spot ever since the initial flight and have instructed passengers not to place their hands on the weak area while entering or exiting the cockpit. I had already purchased a piece of angle aluminum that I was going to rivet onto the underside of the F-1254 roll bar support frame … but when I discovered there was a Van’s solution consisting of adding a stiffener of sorts, I ordered the new part. The Van’s part number is 12-01254A which comes as two stiffeners that when separated become a left and right part. 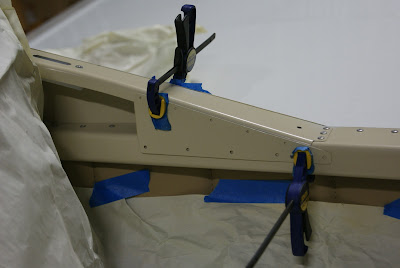 The F-1254A-L stiffener clamped in place on the pilot's side of the RV-12 and ready for drilling.

Instillation is not complicated. Van’s suggests breaking the edge on the upper portion of the F-1254A stiffener that will be riveted onto the F-1254 roll bar support which is what I did. The bottom edge that will be riveted onto the F-1234 canopy deck does not need to be broken, but it won’t hurt to do so. One needs to take a little care prior to drilling to align the stiffener then clamp and drill away. 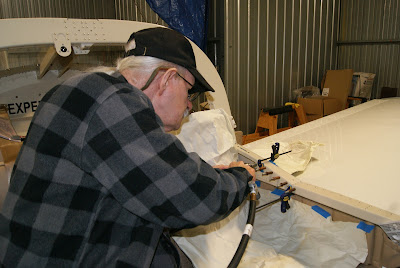 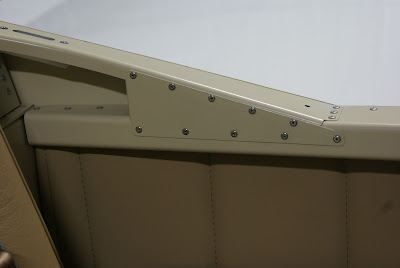 Completed instillation of the F-1254A-L stiffener riveted onto the F-1254 roll bar support and the F-1234 canopy deck.

The F-1254A L&R stiffeners were installed quite a long time ago on the DOG Aviation RV-12. While reviewing camera photos for an upcoming project, it was discovered the instillation process and photos were never posted on the Blog.

I would suggest all legacy RV-12 owners who have not taken it upon themselves to reinforce the F-1254 roll bar support frame with some sort of stiffener consider this easy to install solution from Van’s. It promotes piece of mind knowing one does not need to closely watch where passengers place their hands as they get in and out of the bird.