Service Bulletin SB-00023 involves inspection/replacement of the RV-12’s WD-1221 upper engine mount standoff. There have been a few RV-12 aircraft that have developed cracks near weldments on the WD-1221 upper engine mount standoff discovered during inspections. Van’s took quick action and redesigned the WD-1221 using tubing double the thickness thereby “theoretically” making the areas where the cracking occurs much more robust.

Service Bulletin SB-00023 requires inspections of the WD-1221 upper engine mount standoff be conducted every 100 hours and ongoing log book entries be made unless a crack is found … which, if discovered, requires a mandatory replacement using the new WD-01221-1 upper engine mount standoff. Figured while I still had access to the engine hoist I borrowed from Tom (a fellow RV builder at the airport putting the finishing touches on his RV-10 for his first flight), may just as well go ahead and replace the WD-1221 standoff (even though mine is not cracked) and just be done with it.

All and all, with the exception of dealing with the two sets of double Adel clamps that attach onto the WD-1221 upper engine mount standoff, the process of changing out the standoff was not all that difficult. Fortunately, no fuel, oil lines or wiring needed to be removed (all those items were installed following Van’s suggested path). It was tight but there was enough room to shoehorn the old mount out and install the new mount without jumping through a lot of hoops. 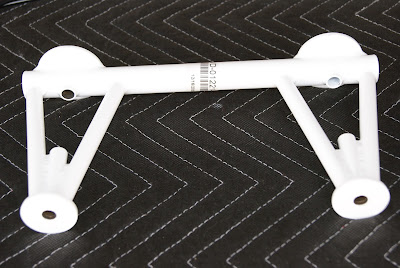 As one can see from this photo of the new WD-01221-1 upper engine mount standoff it visually looks identical to the original, which can be viewed in the two Adel clamp photos bellow. 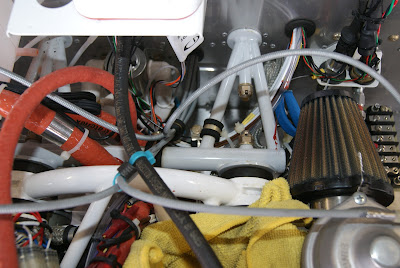 Photo of the pair of Adel clamps used to secure the main firewall forward wiring harness to the WD-1221 upper engine mount standoff. Reattaching these Adel clamps after the upper engine mount has been changed out will be a challenge. Fortunately, there are tricks that help ease the pain … but it still presents a challenge because there is not a lot of room for good access. 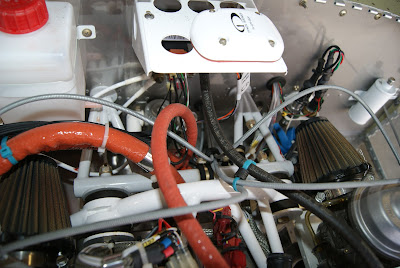 This photo is of the second pair of Adel clamps attached to the WD-1221 standoff … these clamps are used to secure the throttle and choke cables to the WD-1221 upper engine standoff.

Unfortunately, accessing the bolts that secure the WD-1221 upper engine mount standoff to the firewall requires removing the F-1240 upper forward fuselage skin. Once the F-1240 upper forward fuselage skin is removed, closing the canopy will allow great access to the WD-1221 standoff’s mounting bolt heads … as such, this can be done as a one person operation. There was one unexpected complication involving removal of the two mounting bolts that created a little extra work. The bolts could not be completely removed because they contacted the F-00055 com supports.  Solving this issue required placing a sawhorse under the tail cone and jacking the engine until the tail cone contacts the sawhorse … then jacking just a little more causing the isolation mounts to separate from the WD-1221 standoff so the isolation mounts could be removed to garner the enough room to slide the WD-1221 standoff forward far enough to clear the bolts protruding the firewall. Guess I could have bent the lower ear on the com supports … but really did not want to do that. 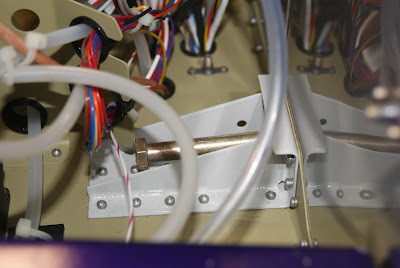 This photo shows how the F-00055 com supports prevent the mounting bolts from being completely removed. 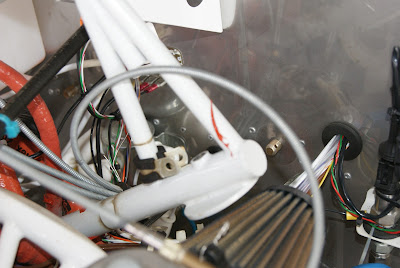 This photo shows when the bolt was pulled aft to the point of touching the com support, there was still quite a bit of the bolt extending beyond the firewall. 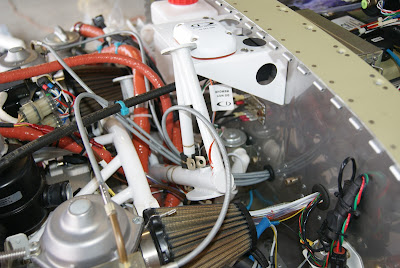 With the WD-1221 upper engine mount standoff rotated upward, it can easily be fished out towards the left side of the aircraft.

The new WD-01221-1 upper  engine mount standoff is slid in from the pilot's side of the aircraft following the same path used to remove the old mount,  then it is rotated down and slid aft over the protruding bolts. Next the isolation mounts are reinstalled. Also of note: Rotax recommends replacing the rubber isolation mounts as part of their 5 year rubber replacement protocol …  so all of the engine’s isolation mounts have been replaced (forgot to mention that in the last posting). After all the bolts are inserted, the castle nuts are torqued to 160 in lbs … after torqueing to 160 in lbs, if a castellation is not yet aligned with the hole in the bolt, the castle nut is tightened more until a cotter pin can slide into the hole in the mounting bolt. The upper limit for the torque is 190 in lbs. so there should be enough margin to allow a castellation to align with the hole in the mounting bolt without over torqueing. 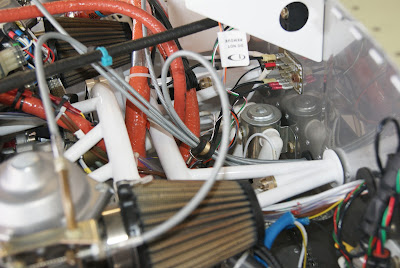 The new WD-01221-1 upper engine mount standoff installed and ready for the two pairs of double Adel clamps to be attached. 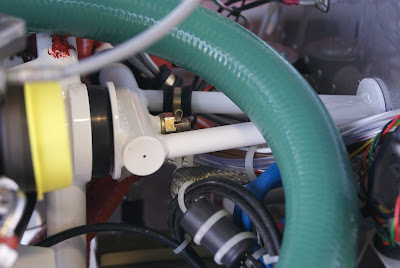 The new WD-01221-1 upper engine mount standoff completely installed … the new mount looks identical to the old WD-1221 standoff with the exception of the tiny hole in the endcap. 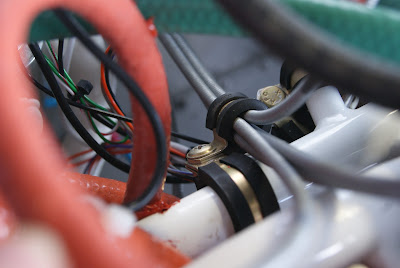 Best photo I could get showing both double sets of Adel clamps attached to the new WD-01221-1 upper engine mount standoff.

Builder tip: The easiest way I have found to install double Adel clamps is to use Adel clamp pliers in conjunction with safety wire. First squeeze each Adel clamp separately and wrap a thin safety wire around the clamp to keep the clamp from fully opening when the pliers are removed. Then align the two clamps together and place the Adel pliers over the two clamps, tighten the pliers, then slide the alignment awl through the bolt holes in the clamps. When the holes are aligned, quickly remove the awl and insert the bolt. Here is where it gets a little dicey …. usually, the bolt is not long enough to allow a nut to be installed because the thickness of the Adel pliers takes up a lot of room. So what usually works well is to press down on the head of the bolt, then slide out the pliers and reposition pliers on top of the bolt head and tighten the pliers again. This should leave enough threads beyond the pliers to get a nut threaded onto the bolt. Once the nut has caught a few threads, remove Adel pliers and thread the nut on the bolt a little more. Next remove the safety wire, final position the Adel clamps, then tighten the mounting bolt. Below is a photo sequence of the steps involved. 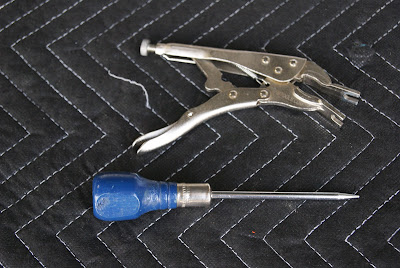 Adel clamp pliers and the awl that comes with the pliers. 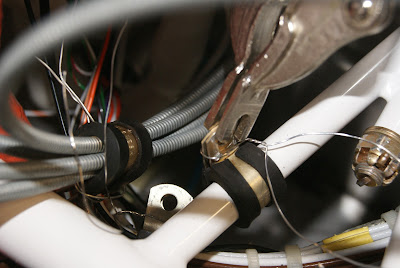 Using Adel clamp pliers to squeeze the clamp’s ears together so thin safety wire can be wrapped around the clamp. Leave the ends of the wire long so the wire can be unwrapped by easily by hand. 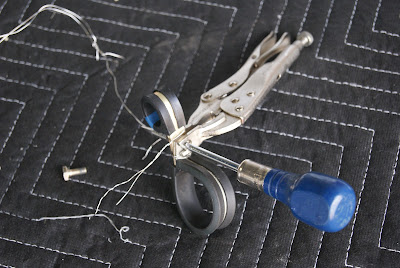 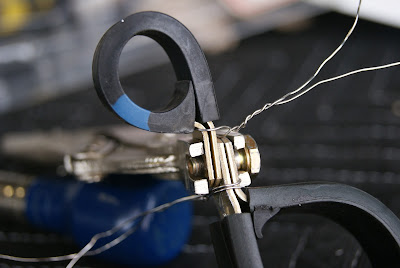 As can be seen here, typically an AN3-3 bolt is not long enough to allow a nut to be threaded onto the bolt because of the thickness of the pliers.

Once the AN3-3 bolt is inserted through the pliers and Adel clamps,  forcefully press down on the bolt head then remove the pliers. Quickly reposition the Adel pliers to capture the head of the bolt …. this allows the threads of the bolt to extend beyond the pliers just enough to thread on a nut. 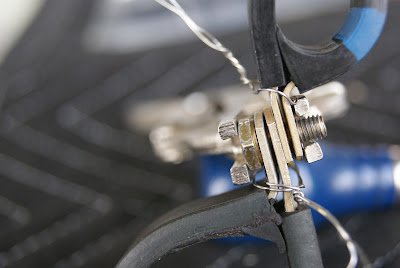 This photo shows how repositioning the Adel clamp pliers to press on the head of the bolt will allow enough threads extend beyond the pliers to allow a nut to be threaded onto the AN3-3 bolt. 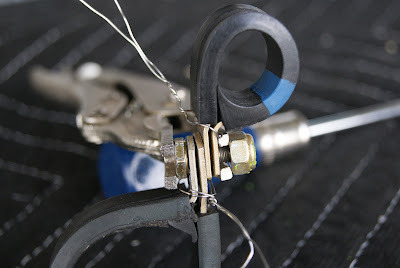 As one can see, clamping the bolt head with the Adel clamp pliers allows a nut to be threaded onto an AN3-3 bolt. Now remove the safety wire, final position the Adel clamps and finish tightening the nut and bolt.

As mentioned previously, completing Service Bulletin SB-00023 was not that difficult … but dealing with the two sets of double Adel clamps located in tight quarters is actually the most challenging aspect of replacing the WD-1221 upper engine mount standoff with the new WD-01221-1 standoff.