The new parts required to complete the service bulletin can be ordered from Van’s using part number SB-19-08-26 for the RV-12 or SB-19-0826iS for the RV-12iS. The DOG Aviation RV-12 required part number SB-19-08-26. As can be seen in the photo below, the kit contains the new WD-1201-1-RTR nose wheel gear leg, two drill bushings, an Adel clamp (used to support the lower radiator hose) along with a screw and nut for mounting the Adel clamp. 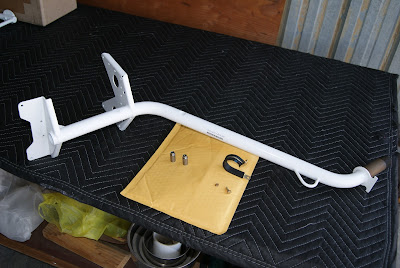 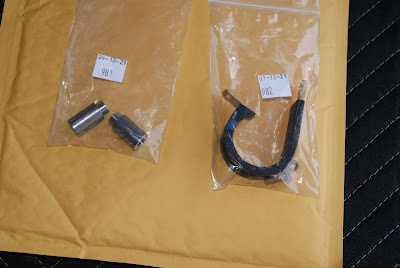 A closer look at bag 981 containing the drill bushings and bag 982 containing the Adel clamp and mounting hardware that comes when ordering part number SB-19-08-26.

Also of note: In addition to needing the drill bushings used to drill mounting holes into the new gear leg, it is also necessary to procure LONG 18" drill bits sized 1/8", 1/4" and 3/8". The 18" long drill bits can be procured locally or ordered from Van’s using part numbers TOOL-00040, 41 and 42 respectfully.

Before the fun begins, there will be a need to procure an engine hoist. A big thanks to Tom a fellow RV builder at the airport who was kind enough to loan me his engine hoist (Tom is building a RV -10 just about ready for a maiden voyage).  Hoisting the Rotax 912ULS engine is accomplished by placing straps around the intake manifolds and using the straps to hoist the engine up. Prior to hoisting the engine much, remove the thirteen AN3-4 bolts from the nose gear’s fuselage mounting plate. At this point, Van’s suggests placing a padded sawhorse under the tail cone. This is because it is necessary to hoist the engine until the tail cone contacts the sawhorse, then hoist a little more to allow the isolation dampers to separate from the nose gear’s firewall mounting plate. While hoisting the engine, there will be a point where most of the weight is off the mounting bolts … when that happens, remove the bolts and slide the WD-1201 gear leg assembly down off the firewall. 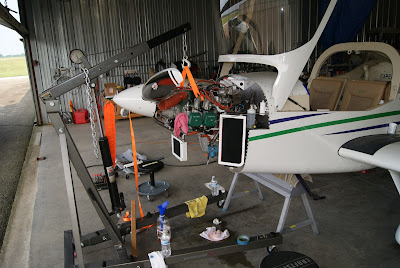 Using an engine hoist to lift the engine via a strap passed under the intake manifolds so the WD-1201 nose wheel gear leg could be removed. Thank you Tom for loaning me the engine hoist.

After removing the old nose wheel gear leg assembly, the nose wheel fork & tire assembly is removed and moved to the new WD-1201-1-RTR nose wheel gear leg. (Do not perform the nose wheel break-out force adjustment at this time because the gear leg will be removed again after drilling). The new gear leg and wheel assembly is placed in position and four AN3-4 bolts are used to temporarily attach the gear leg to the bottom of the fuselage. Next blocks of wood ¾” to 1” thick are placed between the engine mount and the gear leg’s firewall mounting plate and the hoist is lowered to place weight on the nose wheel which, in turn, pushes the firewall mounting plate tight against the firewall. Continue lowering the hoist so the engine mounts are now pressing on the blocks of wood …. Thus forcing the gear leg assembly even tighter to the firewall and ready for drilling. The wood basically simulates the thickness of the isolation mounts. 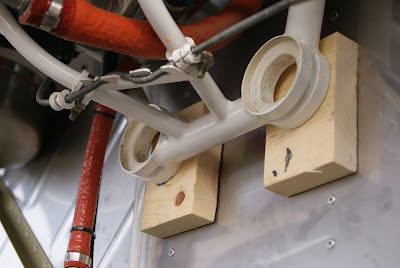 The 3/4" blocks of wood can be seen here sandwiched between the nose gear’s firewall mounting plate and the lower engine mounting point. The engine weight pressure on the wood helps keep the gear leg’s mounting plate pressed tight to the firewall for the drilling process. 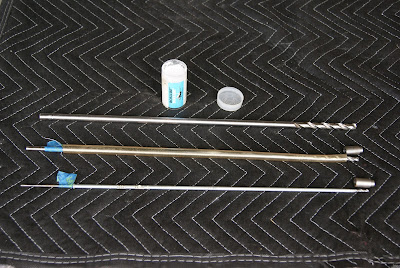 This photo shows the three long 18" drill bits used to drill into the WD-1201-1-RTR nose wheel gear leg mount. Note the 1/8" drill bit has a piece of brake line slipped over it and the 1/4" drill bit has a piece of vinyl tubing slipped over it. The brake line and vinyl tube allows the person drilling to push on the back of the drill bushing thus keeping it firmly seated during the drilling process.

A couple of drilling tips:

First tip:  I like drilling with Boelube because it is drawn to heat. I figured it would be hard to use liquid Boelube so I used solid Boelube instead. If one looks closely at the photo above, you can see strategically placed painters tape on the 1/8" and 1/4" drills … the tape is used as a marker so the drill bits don’t completely penetrate the bushings as can be seen above ... this allows the tip of the bushing to be packed with solid Boelube. The sleeve can then be held at the tape location without the drill bit pushing the Boelube out when seating the drill guide into the existing 3/8" bolt hole in the firewall. After drilling a while, the drill bit/ bushing was removed and repacked with more Boelube.

Second tip: Drilling the hardened steel of the landing gear mounting plate requires slow speed. Suggest not using a high speed air drill. This is one place where a high torque battery operated hand drill set to slow speed is your friend. (Thanks Bernie for loaning me your drill). Work on one hole at a time so that a bolt can be inserted through the gear leg mounting plate to assure nothing will move while drilling the second hole.

Unfortunately, I forgot to get a couple of photos of the drilling in progress, but it required a firm forward force. In order for me to see where I was drilling, it required sitting in the left seat while drilling the right hole … and vice versa. After both holes are drilled into the WD-1201-1-RTR nose wheel gear leg, the engine is hoisted once again so the gear leg can be removed for deburring. After deburring the WD-1201-1-RTR nose wheel gear leg, it is placed back in position and bolted in place using the thirteen AN3-4 bolts. Then the engine is moved up or down as necessary to allow the bolts to pass through the WD-1201-1-RTR nose wheel gear leg’s firewall mounting plate and through the engine’s isolation mounts. The torque range for the mounting bolts is between 160 -190 in lbs. (13.3 – 15.8 ft lbs.).  However, only initially tighten to 160 in lbs. and if a castellation lines up with the hole in the bolt your done … if not, continue tightening until the next castellation lines up with the hole in the bolt and install the cotter pins. 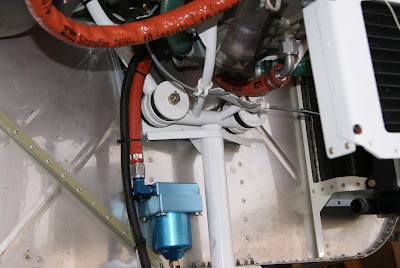 All that is left to do to complete the gear leg replacement job is adjusting the nose wheel breakout force to between 18-20 lbs. … then drill the nose gear leg for the cotter pin using a #30 drill bit. For determining the breakout force I use a Rapala digital fish scale and run a wire through the bolt holes in the nose wheel fork so the fish scale can be pulled on the centerline of the wheel. After the breakout force is established, the last step is to drill new holes into the gear leg for the cotter pin that locks the castle nut in place. Below is a photo showing the Rapala fish scale being used on the old style nose wheel fork (which has been changed out long ago for the stronger newer one). 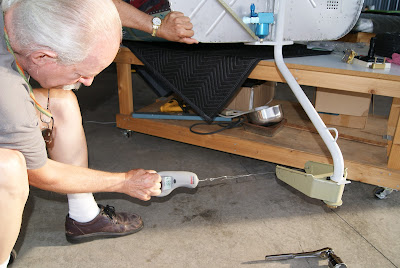 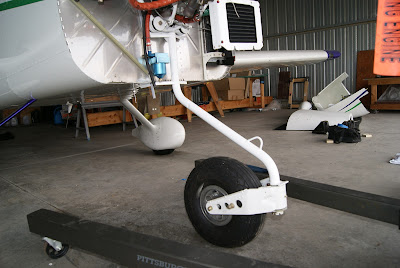 All and all, replacement of the WD-1201 nose wheel assembly was not as difficult as I had envisioned … although drilling the bolt holes while sitting inside the cockpit was a little uncomfortable.