Today marked a momentous occasion at DOG Aviation … the procurement department secured a roomy on-airport production facility which will become the new home of DOG Aviation to finish assembly and flight testing of the RV-12. 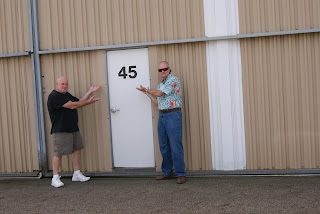 Mike and I at hangar 45, DOG Aviation’s on-airport assembly facility.

About this time last year, during a conversation with a representative for the FAA, it was mentioned I was planning to base the airplane at the local regional airport. I was told at that time phase one flight testing would not be approved from that location and I should look for another airport. This did not come as a big shock because I knew, based on my friend Pete’s RV9A project, quite a few southern airports were off limits to him for his phase one initial flight testing. Knowing that, I never questioned his statement ... blind faith in authority I guess.

Move forward a year- in June I attended a pancake breakfast at what I felt would be my backup airport 30 miles or so away. The local EAA chapter had built a new hangar and had plenty of space available to build the RV-12 there … but after the airplane was built, it would need to me moved. However, the airport had absolutely no hangar space available and the prospects were slim to none. Needless to say, after hearing that bad news, I have been a little depressed lately and progress on the RV-12 has suffered somewhat.

Mike, a long time friend from the old neighborhood, hangars his airplane at our local regional airport and said he knew of a hangar that became available at the airport. Conveyed to Mike what I had been told about not being allowed to conduct phase one testing from there and therefore not interested in the hangar. Fortunately for me, during a session of hangar talk with a couple of RV owners, Mike asked them if they completed phase one testing at the airport … one of the two said he had indeed completed his phase one testing from the airport, all be it a few years ago, but he was not aware of any policy changes.

Hearing that great news, I immediately placed two phone calls to the FAA’s Cleveland FSDO and spoke to a gentleman in operations and also a field inspector who issues airworthiness certificates. Both gentlemen said that because the airport has many miles of open area to the south, there would not be any issues with conducting phase one flight testing from the airport. However, because it is class C airspace, the RV-12 would be required to have a radio and transponder … no problem, it will. I was also told it is possible, but unlikely, that the airport authority may have restrictions of their own … so it was suggested I should verify with them as well. Mike and I paid a visit to the airport authority and after an employee there made a few phone calls up the chain of command, the result was a green light for the RV-12 project.

Upon hearing the good news of no phase one flight testing barriers at the airport, hangar 45 was immediately secured and will soon become the new DOG Aviation facility for RV-12 assembly and ongoing flight operations. Many thanks to Mike for all his help in making this happen. 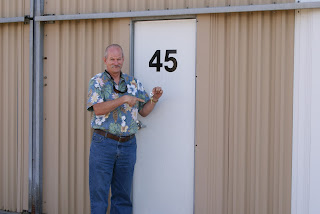 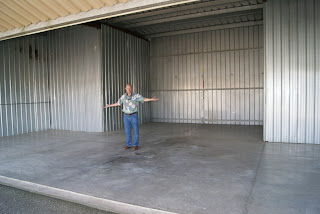 Plenty of room here for the RV-12 to stretch her feathers.
Posted by John at 8:21 PM