While waiting for the JetFlex paint to fully cure decided to move on by preparing more fuselage components for primer. Looking ahead in the plans, decided to prep a pile of parts that most will only require primer and basically go under the seat and baggage floors or are part of the lower fuselage. Think I may have gotten a little carried away because there is now a large pile of parts to prime tomorrow.

There are quite a few parts which required being separated on the band saw, then dressed on the large Scotch-Brite wheel followed by hand massaging with small files and abrasives. 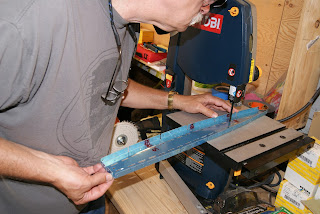 Using the band saw to separate F-1253-L&R side pieces the seat pan edges will mount onto. 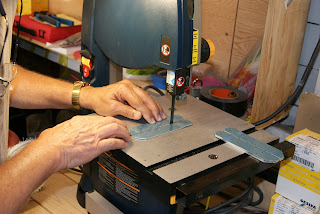 Separating the pile of seat belt mounting strips which will attach to the seat pan ribs.
Many various pieces were run through the band saw creating numerous piles of parts which required dressing on the Scotch-Brite wheel followed by hand massaging. 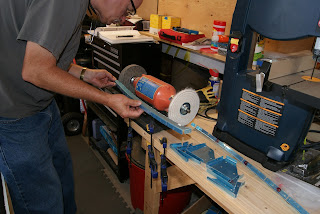 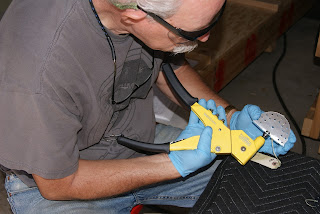 Due to the angle of the flange in this piece, it required using the 120 degree dimple dies which have holes through the center. A nail is placed through the dimple dies and pulled by the hand rivet puller … thus squeezing the dies together to form the dimple. 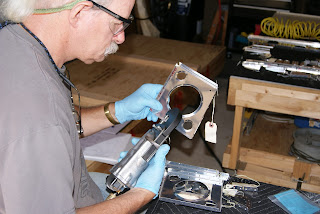 Using the pneumatic squeezer to place dimples in the bottom of one of the aft baggage floor ribs.
Because the decision was made not to install flush rivets in the area where the side skin doubler plates will be installed, (it will be hidden by the wing) when dimpling the F-1253-L&R pieces for flush rivets the aft most 8 holes were not dimpled … this is because they reside within the area of the side skin doubler plate. 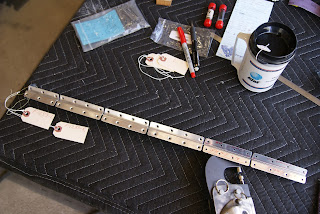 F-1253-L&R pieces dimpled for flush rivets except for the aft most 8 holes. 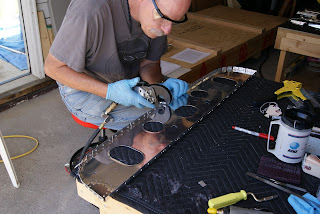 Dimpling the bottom of the F-1206 bulkhead for the flush rivets being used on the RV-12 project. 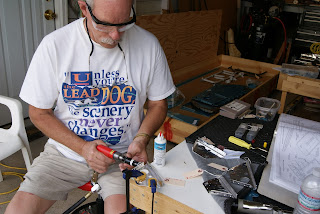 Machine countersinking one of the four the F-1233B-L&R pieces.
The fruits of the last few days of labor can be seen below. All the parts are now fully deburred, dimpled and/or machine countersunk if necessary and are ready for a cleaning with Acetone and roughing up with a Scotch-Brite pad followed by more Acetone and on to the paint department for a shot of primer. 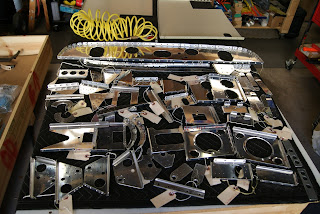 Pile of parts ready for a Scotch-Brite pad attack , Acetone cleaning and off to the paint department for primer.
﻿
Posted by John at 8:03 PM