The last couple of times the paint box was used I noticed debris landing on the freshly primed surface. At first, thought the debris was coming from a neighbor’s messy tree, but towards the end of the primer session I actually saw debris being kicked up from inside the spray box as the spray gun passed beyond the edge of the material being painted.

The spray box required a good cleaning … hind sight being 20/20, the spray box should have been built with a hinged top to make this task easier. Amazingly, the over spray on the bottom and sides of the box came off quite easily with a wire brush. It was just a bunch of powder and had not really stuck to the wood. 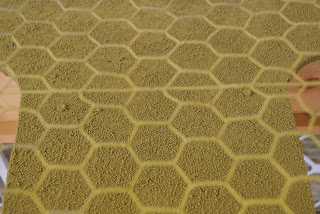 Bottom of spray box before cleaning the built up primer can easily be seen. 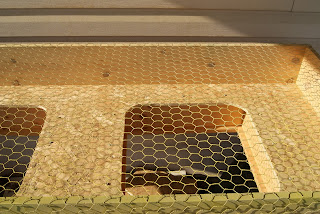 Spray box after cleaning with a wire brush … almost looks like the day it was built.
Yesterday marked the first big primer session for the RV-12’s fuselage components. Once again Akzo primer was used on the parts for the center channel, fuselage ribs, along with the seat and baggage floors. The current plan is to top coat the interior parts prior to riveting so today was spent spraying Sherwin-Williams JetFlex which is a polyurethane interior spray paint made to Boeing specifications. A lot of good things have been said about JetFlex on the forums, so decided to give it a try.
JetFlex is available in two versions ... solvent based and water reducible. Because the solvent based JetFlex has isocyanates (which respirators do not filter out) decided to go with the water reducible JetFlex.
Sherwin-Williams JetFlex – First Impressions …. Boy this stuff is thick! The consistency of a thick, creamy smooth, pancake batter comes to mind. The JetFlex can says to thin 10-20 % with distilled water, so I opted to go for 15% which ultimately worked out well.  I have never sprayed a water reducible polyurethane paint before so have been hoping my spray equipment would handle it. My spray gun has a 1.4mm spray tip which I feared would be too small. For individual smaller parts, such as the ones I’m working on, the 1.4 mm tip seemingly worked OK … but I feel if one were to spray paint very large surfaces, it may be hard to keep a wet edge unless a larger spray tip is used. I purposely adjusted the gun to spray a smaller pattern than usual and opened the material valve a little more than usual and was able to get a good spray pattern going.
The paint laid down nice and smooth … the parts look nice so far. The instructions say to spray approximately 3-4 mils thick (using two coats sprayed at 15 minute intervals) and after drying, the dry film is 1.2 – 1.6 mills thick. I hope I got it thick enough. The paint dries to the touch in 20-30 minutes, HOWEVER, full cure will be 2 weeks or more unless force cured at 140 degrees. Reports have been the paint is durable enough to rivet after three days or so. I only sprayed one coat to save weight but noticed one piece will need touching up because I got it a little too thin. Next time around will spray two thin coats. 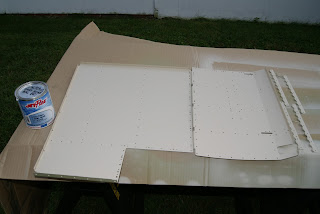 Some parts a couple of hours after spraying with Sherwin-Williams JetFlex sandy beige water reducible interior paint.
Sherwin-Williams JetFlex – Second Impression … Boy this stuff is hard to clean up. If cleanup is any indication of durability, this paint will be rugged tough. A ladle was used to scoop 10 ounces out of the can to make the thinning math easy. The ladle had the thick paint wiped off with fingers and was left out in the air for no more than 4 or 5 minutes as a bucket of water was filled, then the ladle was dropped into the water and left for cleanup later. After the spray job, the ladle was removed from the water and the paint was not phased by the water … it would NOT rub off. Acetone softened it a little and small pieces would finally flake off. Colman lantern fluid (Naphtha based) would not cut it, nor would Denatured Alcohol. Lacquer thinner seemingly worked the best and many small pieces came off with rubbing until the ladle was clean.
Immediately after spraying, plenty of water was run through the spray gun which only washed the thick stuff out the chambers but there was still a thick film left in the gun the water would not budge. (This may be because air got inside the gun during paint refilling so next time will not run the gun totally dry before refilling). The spray gun was then cleaned with Lacquer thinner which removed the paint in small clumps … and it took FOREVER to totally remove all the film and flakes from inside the gun. And here I thought cleaning up Akzo primer was a tough (but doable with Acetone before full cure) cleanup … JetFlex takes that to a whole new level.
Admittedly, I may have brought some of the hassle on myself … after the cleanup I got on the computer and looked at the application data sheet which says if dried, use water and ammonia for cleanup as soon as possible. Wouldn’t have mattered much, had no ammonia on hand. But to be fair, I did not follow the cleanup directions per the data sheet, so will give the ammonia a try during the next JetFlex session before complaining more about the hassle of cleanup. Suspect it will still result in a clumpy mess, but I’m not a chemist so we’ll see next time around. Either way, JetFlex appears to have good fluid resistance and makes a good choice for aircraft paint. Once it totally cures after a week or so it is going to be a very durable paint.
Return from the future – Using a 50/50 solution of water and ammonia makes a HUGE difference in the ease of cleanup. Try not to let the gun run dry and when finished with the spray gun, immediately run the ammonia solution through the gun. Disassemble the gun and soak the parts in the ammonia solution and clean parts with brushes as usual.
Posted by John at 8:32 PM