Between some tool delays and Mike pulling me out of retirement for a couple of weeks to help him with a large project for his company, it has been a long time since any work has taken place on the RV-12.

Today work resumed by way of removing the remaining rivets holding the F-1206F bearing bracket onto the F-1206A bulkhead. As mentioned in a previous post, I had used solid rivets to attach the bearing bracket to the F-1206A bulkhead which has complicated matters somewhat because, for the most part, the rivet heads are hidden when positioned for drilling. Adding to the quagmire, it was discovered the body of my inexpensive angle drill was too big and would not allow a drill bit to get square to the rivet heads of the outer most rivets on each side of the F-1206F bearing bracket.

As such, I was worried that drilling them out may present problems … so I had a tool specially made to shift the odds in my favor and also picked up a used pneumatic angle drill which has a much smaller body at the drill attachment point. The DOG Aviation procurement department made a call to Mike at Cleaveland Aircraft Tool requesting fabrication of three drill guides to fit over the head an AN470AD4 rivet. The guides were made with #30, #40 & #50 holes through the center and measure 1" x 1/2". Because the rivets were so close to the bend of the metal it was necessary to grind off a little of the guides so the guide would sit square over the rivet heads. The guides worked great and the rivets were easily removed without creating elongated rivet holes. 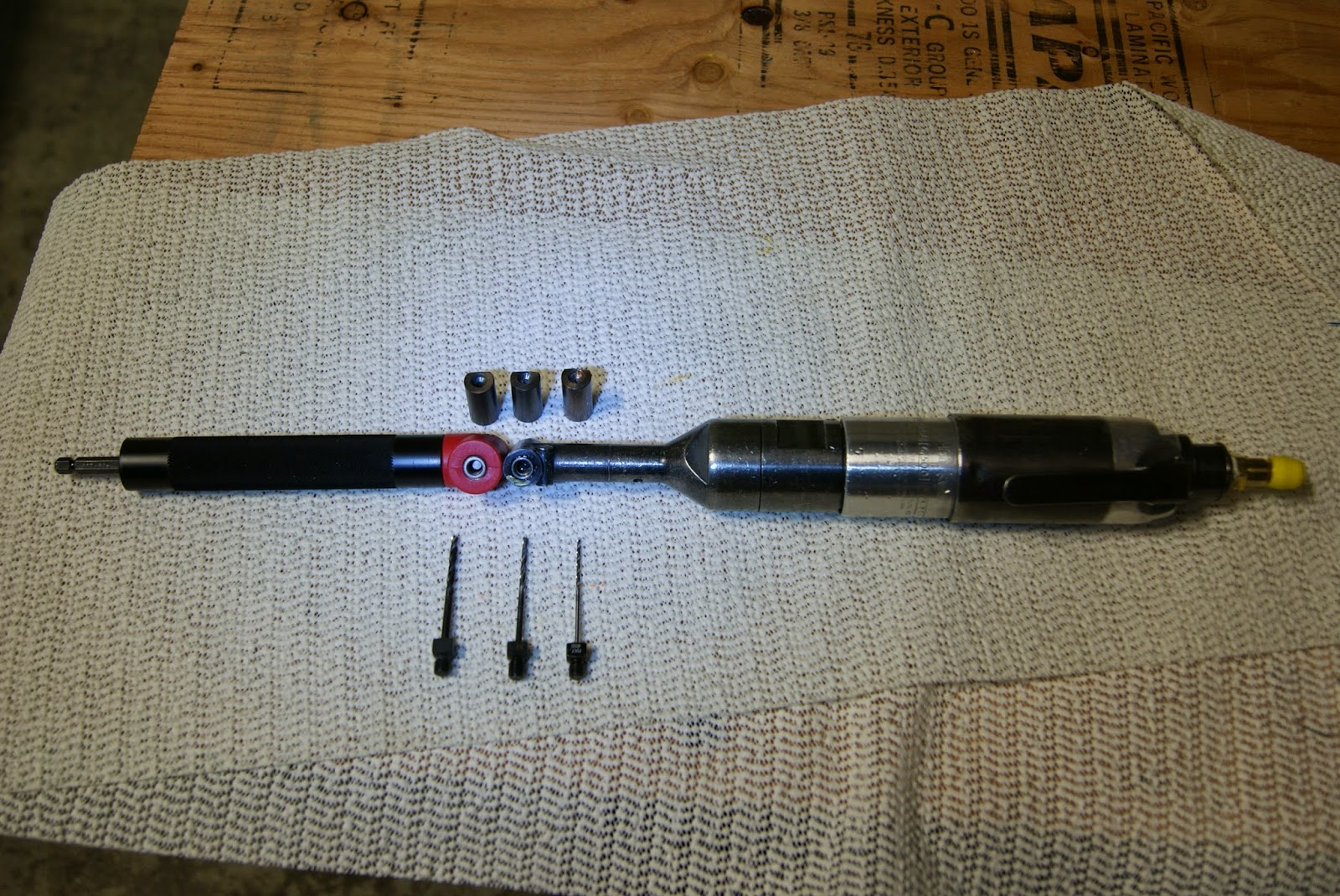 One can see how much smaller the head of the pneumatic drill is compared to the plastic one. 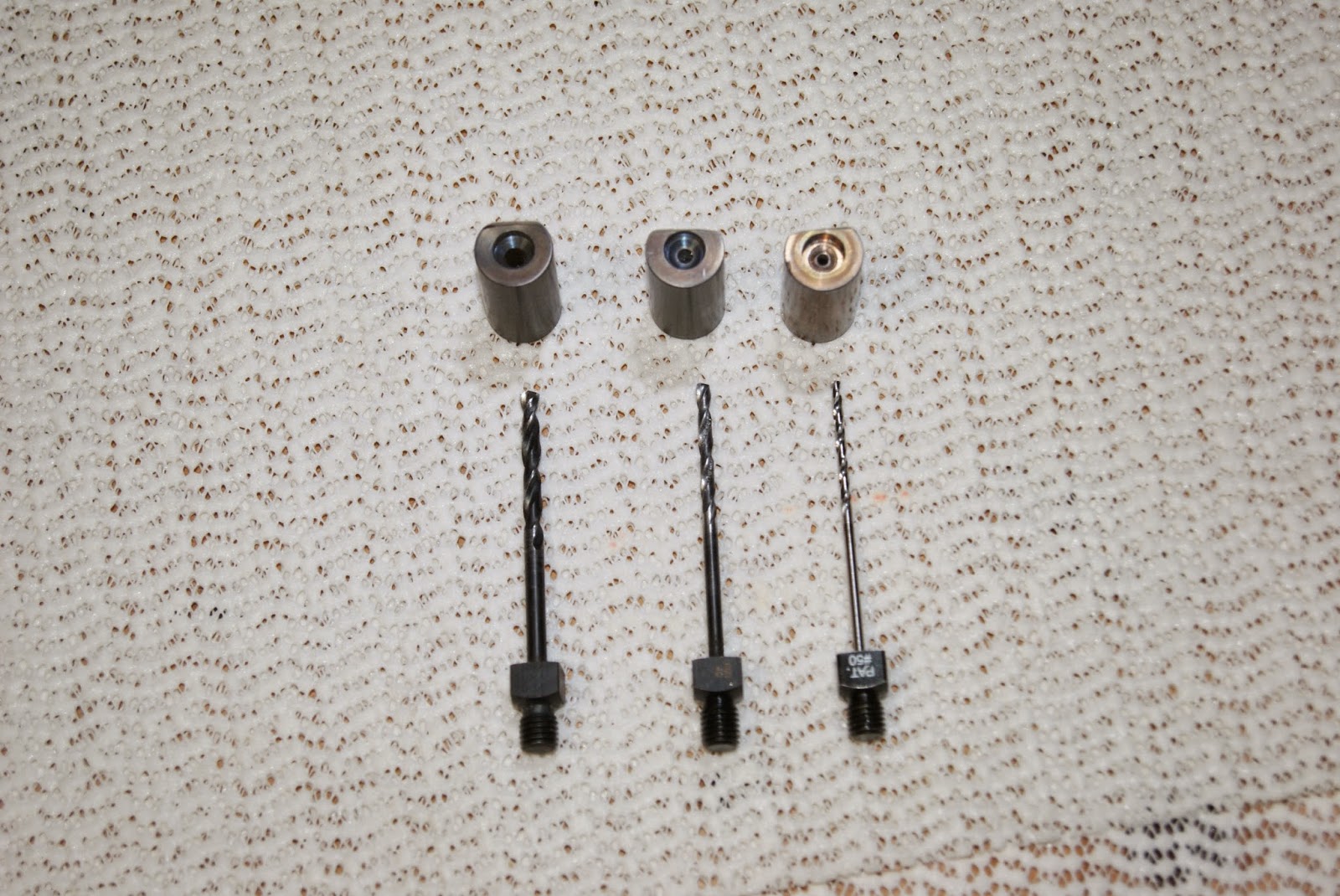 Drilling the solid rivets was a two man job … so Bernie came over to help. Bernie positioned the drill guides over the heads of the rivets by reaching through the lightening hole in the F-1206A bulkhead as I directed the drill bit through the center of the drill guide and drilled through the rivet … (while trying not to drill Bernie’s fingers). A #50 hole was drilled through the rivets first, then the holes were enlarged to #40. Finally a #30 drill bit outfitted with a drill stop was used to remove the heads of the rivets. Thanks Bernie … couldn’t have done it without your help. 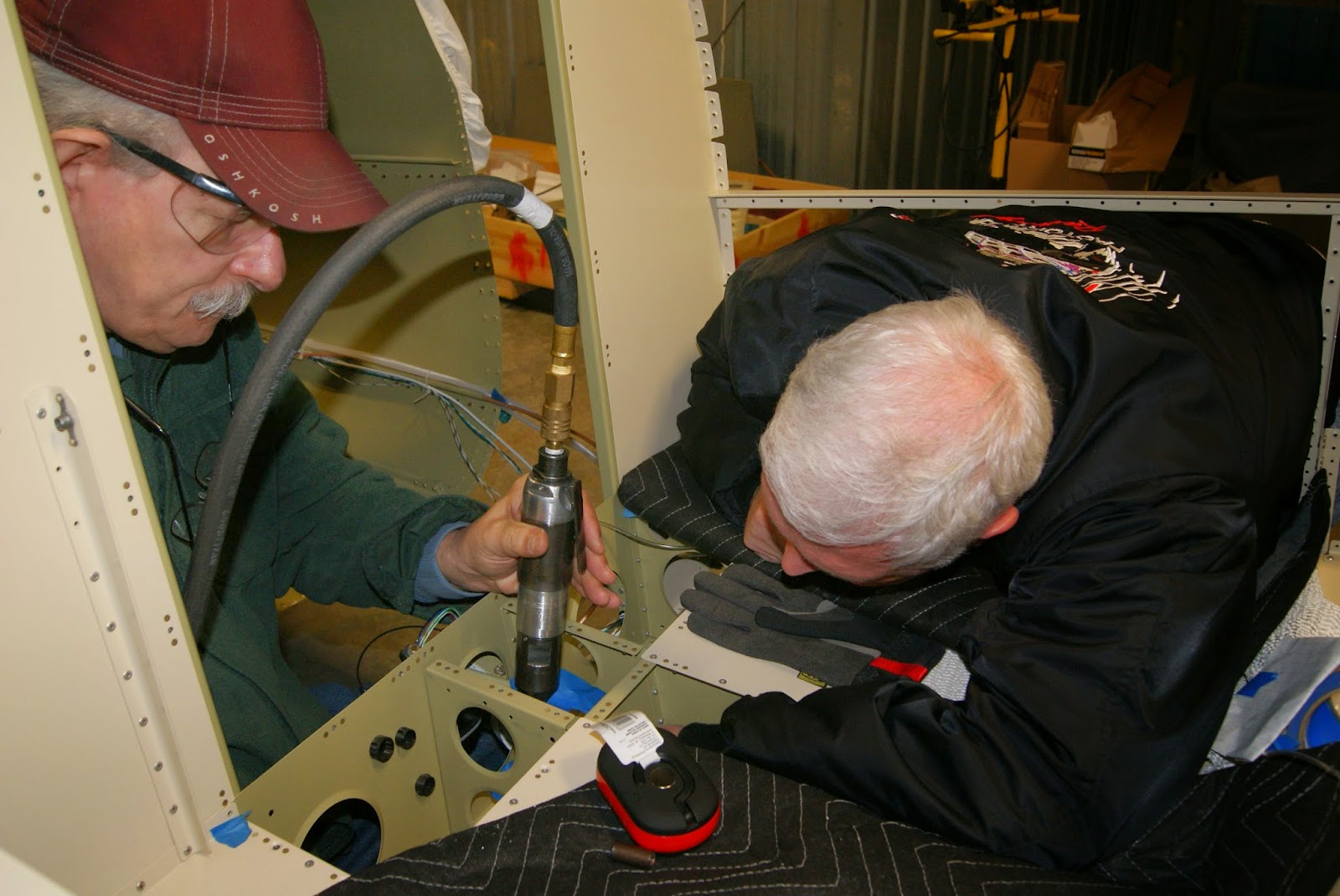 Bernie holding a drill guide over the head of one of the solid rivets as position the pneumatic angle drill bit through the centering hole on the drill guide. 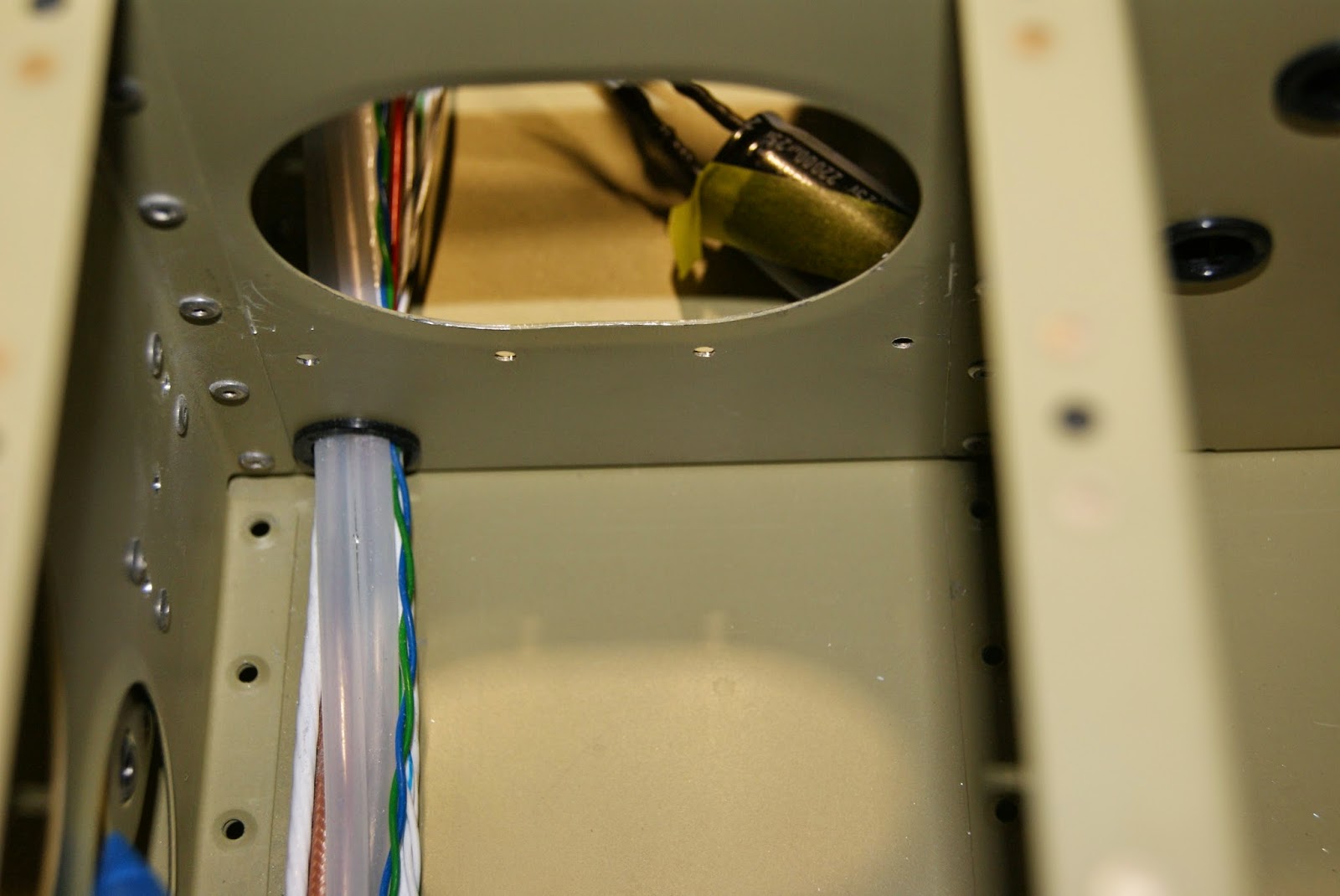 F-1206F bearing bracket removed from the F-1206A bulkhead clearing the way for the new bracket.

The new replacement parts for bearing bracket require a little cutting on the band saw. The piece of predrilled angle that comes with the kit needs to be cut in half and becomes the F-1206J-L&R bearing bracket angles. Another band saw cut is required to remove 1/4" from one side of the angle. 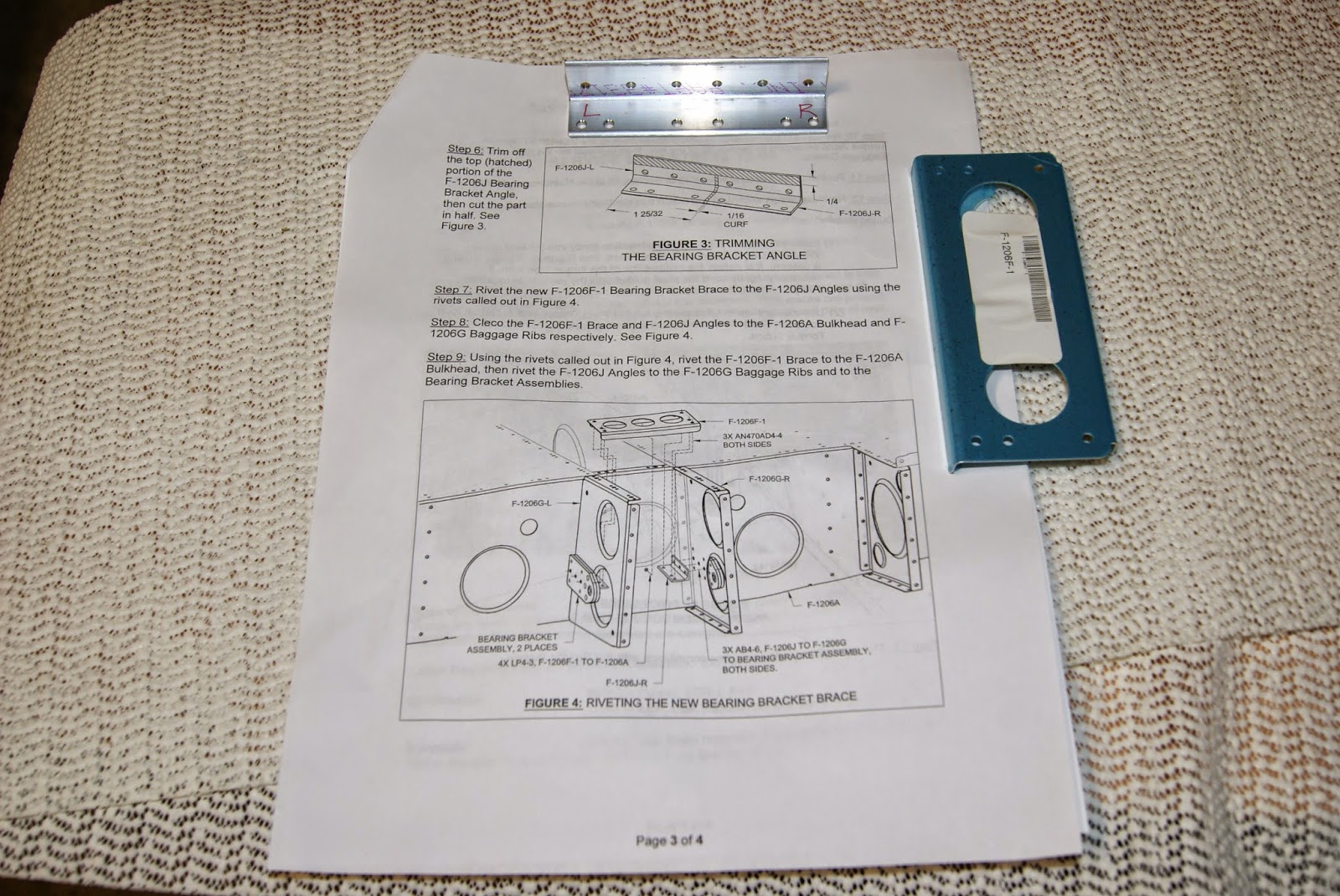 The replacement bearing bracket angle prior to separation. 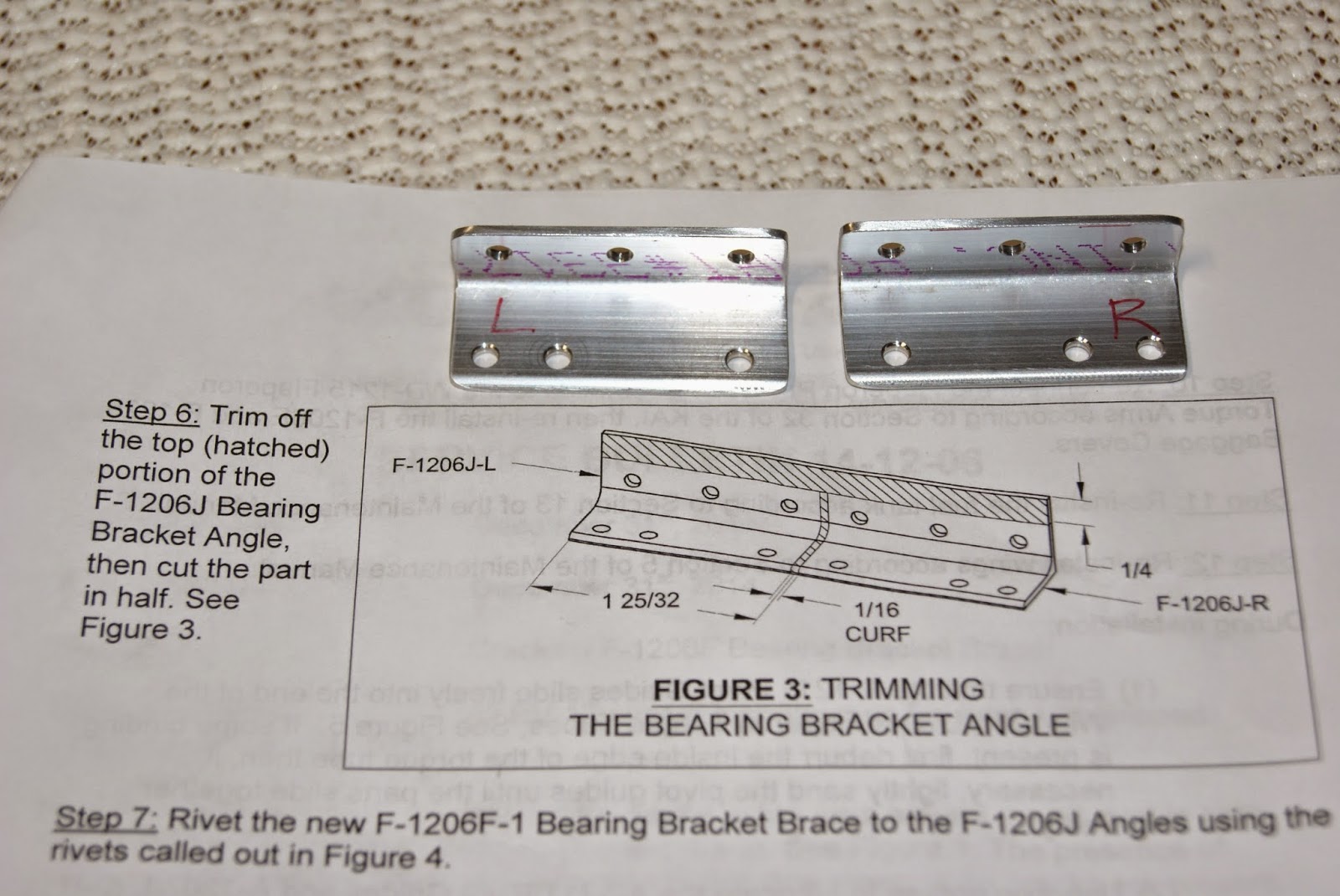 Before instillation feel it best to prime the new parts and touch up a couple of scuff marks made while removing the old parts. Rain is in the forecast for tomorrow morning so hoping I can get the airbrush out later in the afternoon or on Saturday so the parts will be ready to install over the weekend ... finally putting this portion of the project to bed.