It has been determined the doubler plates added onto the sides of the fuselage are a non issue since they are hidden by the wing … as such, they will not receive flush rivets. However, there are a few holes in the forward portion of the W-1270D side skin doubler that can be seen from below the wing … so those holes will receive countersinks because that doubler lies on top of the W-1270A skin doubler.

The bottom of the fuselage receives 10 triangular shaped stiffener plates which come on one stamped strip and require being separated on the band saw.  The plates are labeled W-1268A to E and the hole patterns differ slightly between the plates. Of course, these parts are not installed until much later … but they need to be addressed now because they are too thick to dimple and will require countersinking for the flush rivets. Because the stiffeners are too thick to be dimpled and will receive machine countersinks, the bottom skin and internal ribs underneath these stiffeners will not be dimpled. So the stiffeners needed to be laid out on the bottom skin at this time so marks can be placed on the bottom skin defining the areas that will not require dimples. 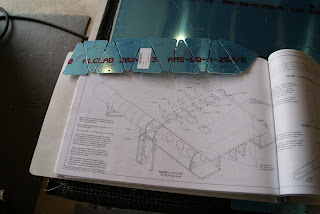 W-1268 stiffener plates. Prior to separation, the plates need to be marked A to E according to the plans. 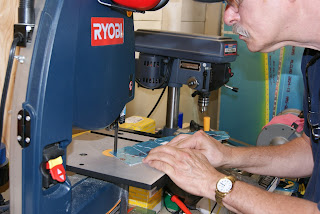 Separating the W-1268 stiffener plates on the band saw.
After the stiffener plates were separated from one another, the edges were smoothed on the Scotch-Brite wheel and the parts positioned on the bottom skin for marking. 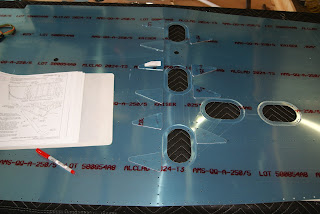 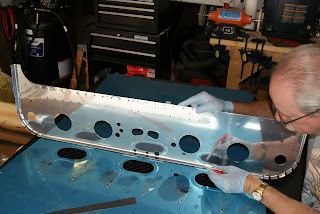 Marking the ‘no dimple zones” on the W-1204D aft center channel bulkhead.
There are three pairs of baggage compartment ribs. The W-1223R&L ribs are not affected by the doubler plates and all the holes on the bottom flange of those ribs will be dimpled. However, the forward most three holes on both the W-1222R&L + W-1221R&L ribs fall into a “no dimple zone” and were marked accordingly for no dimples. 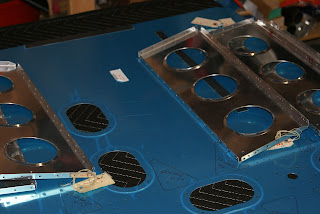 The first three holes of the W-1221L baggage floor rib can be seen falling
within the “no dimple zone” and was marked for no dimples. 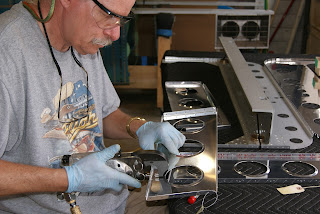 Dimpling holes on the bottom flange of one of the six baggage floor ribs.
Posted by John at 6:32 AM