The plans call for machine countersinking 13 holes on the aft right portion of the RV-12’s W-1204 center section using a 100 degree #30 countersink bit. All of the holes requiring countersinking are located on the upper row of holes between the two holes that were previously drilled out to #11. Van's points out the countersink needs to be just a little over 1/4" wide which allows a rivet to sink way into it. Guessing this is because the rear bulkhead is a little thicker and after it is dimpled, the dimple is not as "crisp" as it would be on thinner material. The wider/deeper countersink allows the dimples in the aft bulkhead to properly set into the countersinks. My countersink width ended up being approximately .263" well within the maximum width guidelines given in the instructions. 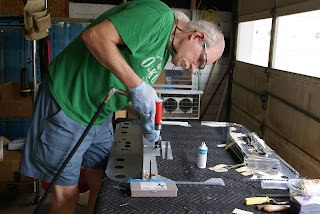 Using a countersink cage outfitted with a #30 100 degree bit to machine countersink the center section. 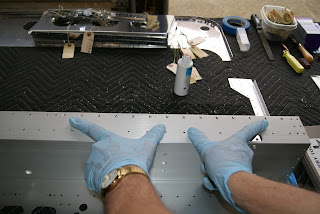 Completed machine countersinking of center channel – fingers show span of countersunk holes.
After machine countersinking the center channel, the plans call for dimpling the corresponding holes in the W-1204D aft bulkhead. Once the dimpling was completed, I was planning to dimple the fuselage ribs along with the sides of the center section. Looking way forward in the plans reveled there are stiffener plates that attach onto the bottom fuselage skin. The stiffeners are probably too thick to dimple, so they will likely require being machine countersunk. If that is the case, the rivet holes in the fuselage ribs common to the stiffener will not be dimpled. Will need to lay the parts out and mark the fuselage rib holes that will not be dimpled.
Since the introduction of the RV-12, Van’s has made a modification to the center section by adding hardware and stiffeners making it stronger to better distribute landing gear forces.  A portion of that modification incorporates a stiffener plate which is added on top of the fuselage’s side skins. I’ve done some research and this stiffener is positioned where the wing meets the fuselage and is not visible from above the wing and only a very small portion of the stiffener extends below the wing forward of the center channel. 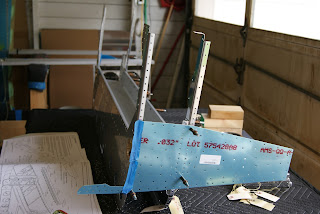