Work in the shop was suspended for a couple of days this week due to the wrath of Mother Nature. The property adjacent to the DOG Aviation production facility has(had) a huge majestic oak tree which did not survive recent storms … resulting in a large section of the neighboring oak tree falling into the neighboring house. The location where the limb broke away from the tree trunk was at a node where an adjacent limb, which looms over the DOG Aviation facility, meets the main trunk of the tree. The tree’s open wound revealed the limb looming over the shop was also compromised internally, so felt it would be unwise to work in the shop until the limb was removed. 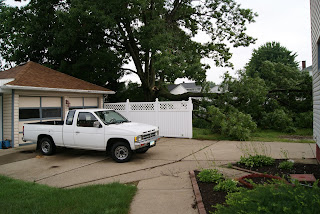 Large section of the oak tree which fell and smacked into the neighboring house.
Before the oak tree diversion, prep work began by running a couple of center section parts through the band saw to separate them for deburring. Also fished out the baggage compartment ribs and filed the edges of those smooth along with the center section aft bulkhead. Today the Scotch-Brite wheel was used to smooth the edges of fuselage parts previously filed so they will be ready for dimpling and primer/paint. 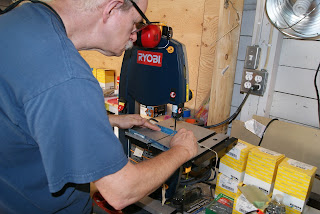 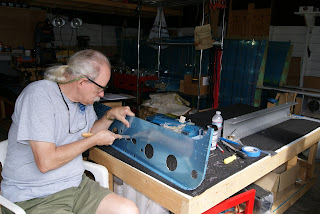 Filing the edges of holes in the center section’s aft bulkhead. 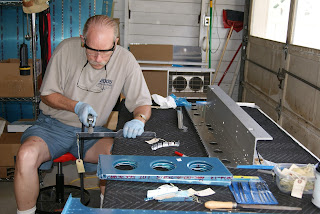 Using the 1” Scotch-Brite wheel to smooth the edges of fuselage center section parts.
Posted by John at 8:00 PM