Admittedly, not much big progress has been made on the RV-12 as of late. Aside from a little work here and there, have not spent any serious time in the shop and have been doing other things while enjoying the long anticipated warm weather.

With the changes in the wiring mentioned in a previous post, panel switches will be needed for the left landing light and additionally a switch for the electric fuel pump. Preferred not installing plain old toggle switches, so the search was on to find rocker switches that match the RV-12's panel switches. A big thanks to RV-12 builder Dave at Schmetterling Aviation for taking a very good photo of his instrument panel from above that clearly shows the panel switches are soldered onto circuit boards. After seeing that, decided not to attempt ordering the switches from Van’s because I preferred not to etch a printed circuit board just for two switches, so began searching for switches that are similar but non congruent … in that they should look identical but have either screw or spade terminals.

Return fron the future. Correction – My assumption that the rocker switches are soldered onto a PC board is NOT correct. It was pointed out to me that the Otto part number I came up with below for the RV-12 rocker switches is indeed the actual part number Van’s uses for the RV-12’s SPST rocker switches. I revisited the photo mentioned above which I based my solder assumption on and upon a MUCH closer inspection, one can see that female spade connectors are soldered onto the PC boards and the male spade connectors on the rocker switches just plugged into the female connectors. Gee, wish I would have known that a couple of weeks ago, for it would have saved me many hours of research.

The Van’s Air Force forums were searched for a lead on the switches … found a few threads pertaining to finding a source for the switches but it appeared nobody had ever posted a vendor source. I spent hours to no avail searching on the Internet for rocker switches that looked like those installed in the RV-12’s panel. Finally, I decided to call Stein (a supplier for some of the parts on the RV-12) and was told he does not supply the panel switches, but thought they may be made by “Auto”.  So I began spending hours doing new Internet searches for “Auto” rocker switches … here again, to no avail basically only seeing automotive type switches.

Then finally the “duh moment” … I ran across a switch manufactured by a company called Otto.  Duh !!! Stein didn’t say Auto … he said Otto!!! Got on their WEB site and was pleased to find what appears to be exactly the same panel switches as used on the RV-12’s instrument panel. 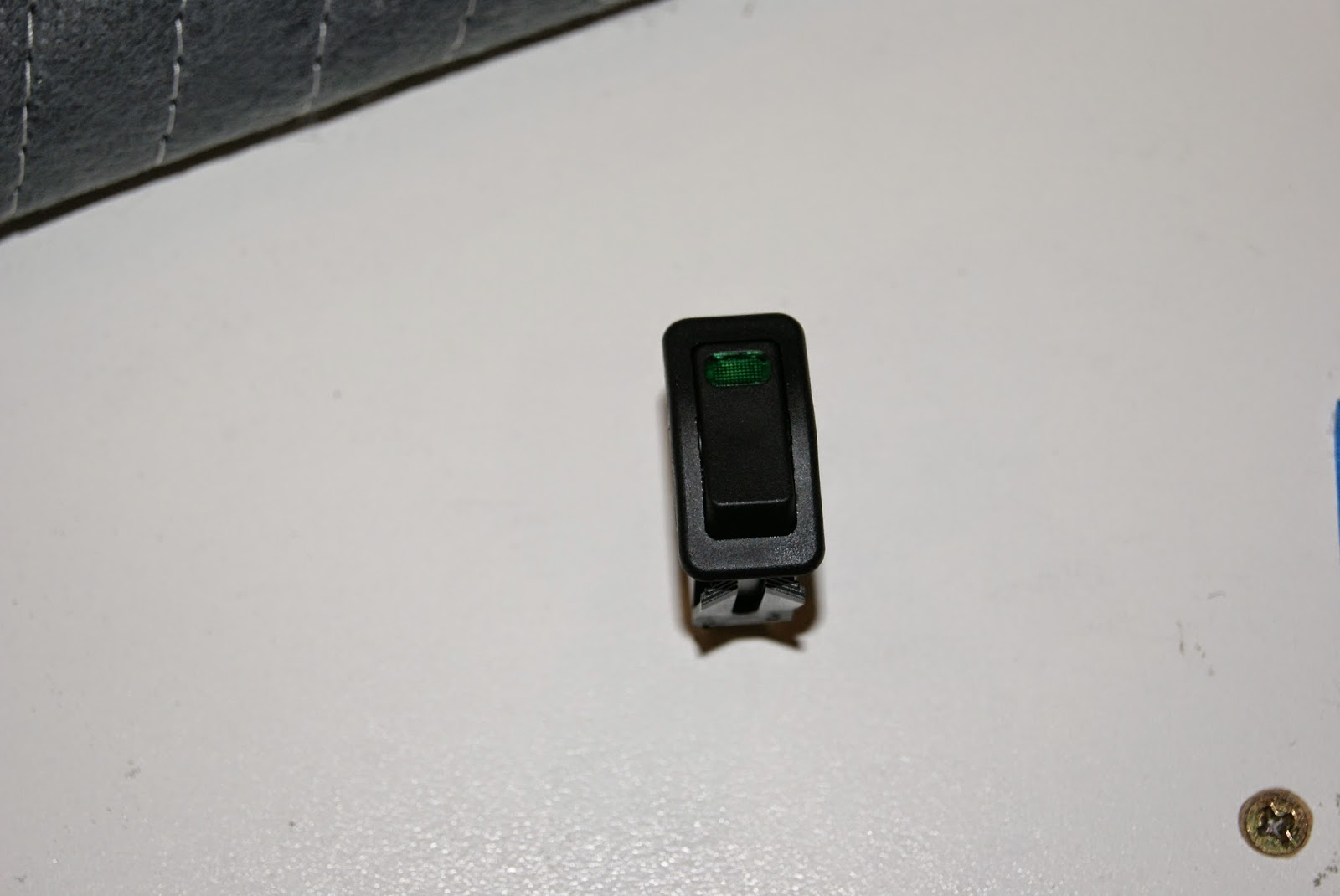 The elusive rocker switch manufactured by Otto that appears to be an exact match for the RV-12 except this single pole single throw version uses spade connectors and not printed circuit solder connections. 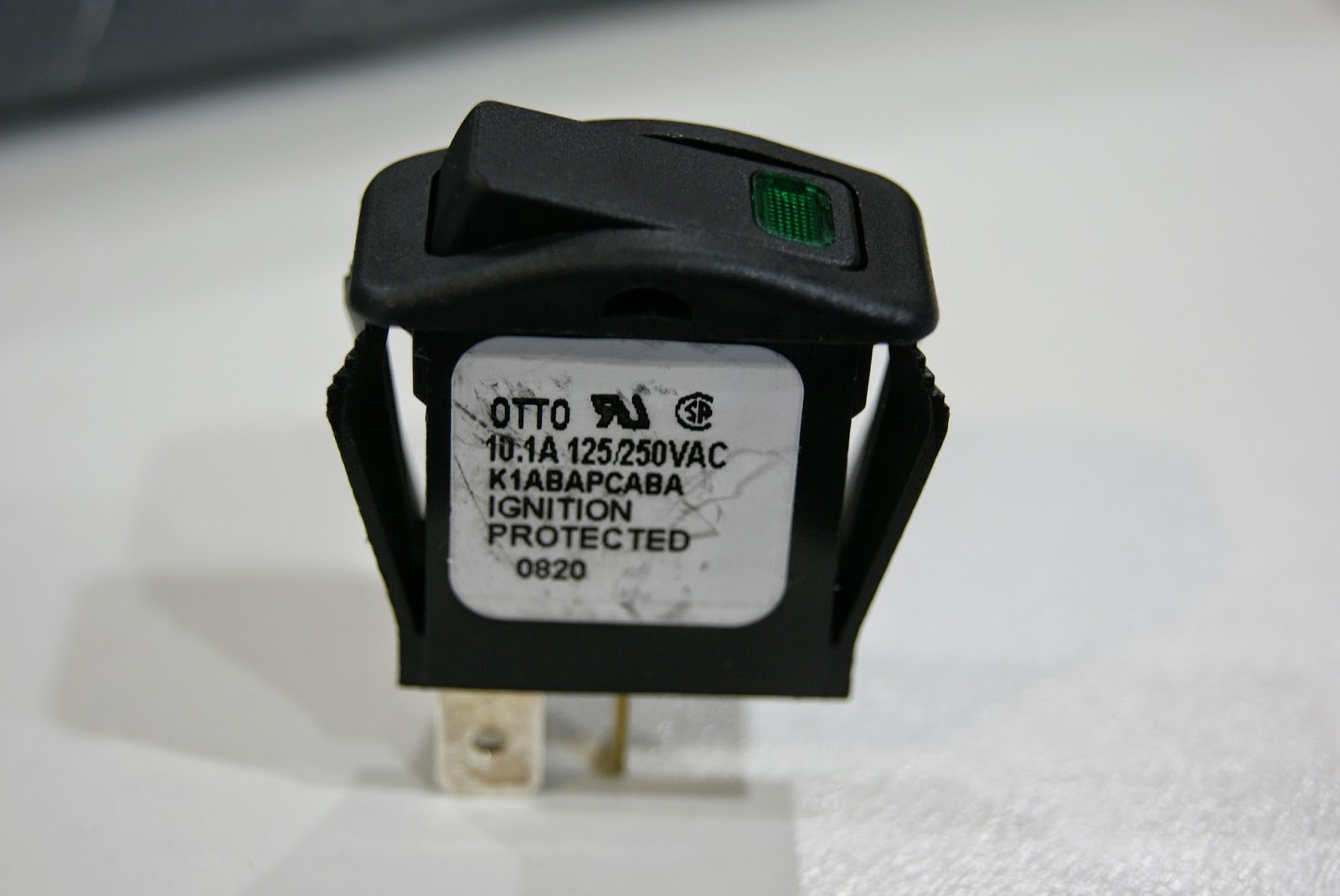 Otto makes rocker switches available as either a single pole (K1) or double pole () switch. The letters after the K1 or designate the connection type, switch color, LED light voltage, ect.  The part number for the Otto single pole rocker switches ordered by the DOG Aviation procurement department is K1ABAPCABA. Otto has a PDF file on their WEB site describing the multitude of available combinations for their K1 & K2 rocker switches but here is what the long part number means for the switches ordered.
K1 - Single pole rocker switch
A - Quick Connect standard spade leads
B - Actuator color of black
A - Switch action … on in “A” position, off in “C” position (single pole single throw)
P - Light type … 12 volt green LED
C - Lens color position “A” Green
A - Lens color position “C” None
B - Light/circuit location … Dependent light on in position “A” wired to terminals 1&3
A - Legend and orientation … None

Finding a distributor for the switch also proved to be challenging as well … some wanted a ridiculous minimum order, but it appeared Mouser did not. However, since I wanted a spare, I ordered three from Quist Electronics in because they were a few bucks cheaper per switch than Mouser. Return from the future - also or what it is worth, a fellow builder informed me that Van’s charges $14 for the switches which is what I paid for them from Quist.

The schematic for the switch is similar to the one bellow. I tested the switch by placing 12 volts on the center terminal and a ground on terminal 3 … when the switch is placed in the “A” on position, the LED lights and 12 volts is placed on terminal 1 which will be wired to the load … in my case that will either be the left landing light or the fuel pump. 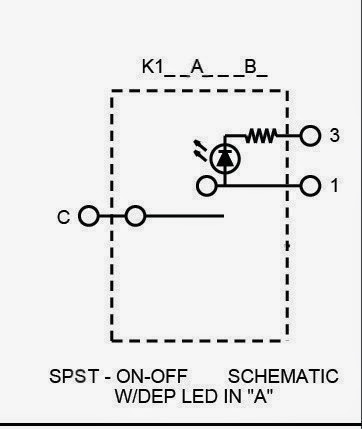