Wiring The Lighting System – Off The Reservation

Because the DOG Aviation RV-12 is being built as E-AB and not E-LSA, the decision was made early on to take advantage of the flexibility building E-AB offers and install shielded cable for the navigation/strobe lighting … so the wings were wired accordingly when built. In addition, because a second landing light was installed in the left wing for Wig-Wag operation, decided to also run shielded cables for the landing light circuits as well, just in case the Wig-Wag mode also generates a little electrical noise … this is most likely total overkill (a trait I’m known to exhibit at times).

The deviation from Van’s wiring - the plan is to run two 18 gauge 2 conductor shielded cables from the instrument panel to the blue electrical connectors on the fuselage for the wings ... one cable for navigation & strobe power and the second for landing light and pulse (Wig –Wag) power.  Admittedly, working with shielded cable has its unique issues and there are more than a few ways to install the cables. Ultimately, the instillation method decided upon creates a lot of extra work, but think I’ll be happy with the results.

Grounding shielded cable – when installing shielded cable, to be effective the shields should only be grounded at one location on the cable … which opens up lots of possibilities. For good or bad, the decision was made to ground ALL the shielded cables being installed for the lighting system to one of the previously established ground points on a seat rib near the center of the fuselage aft of the F-1203A bulkhead. 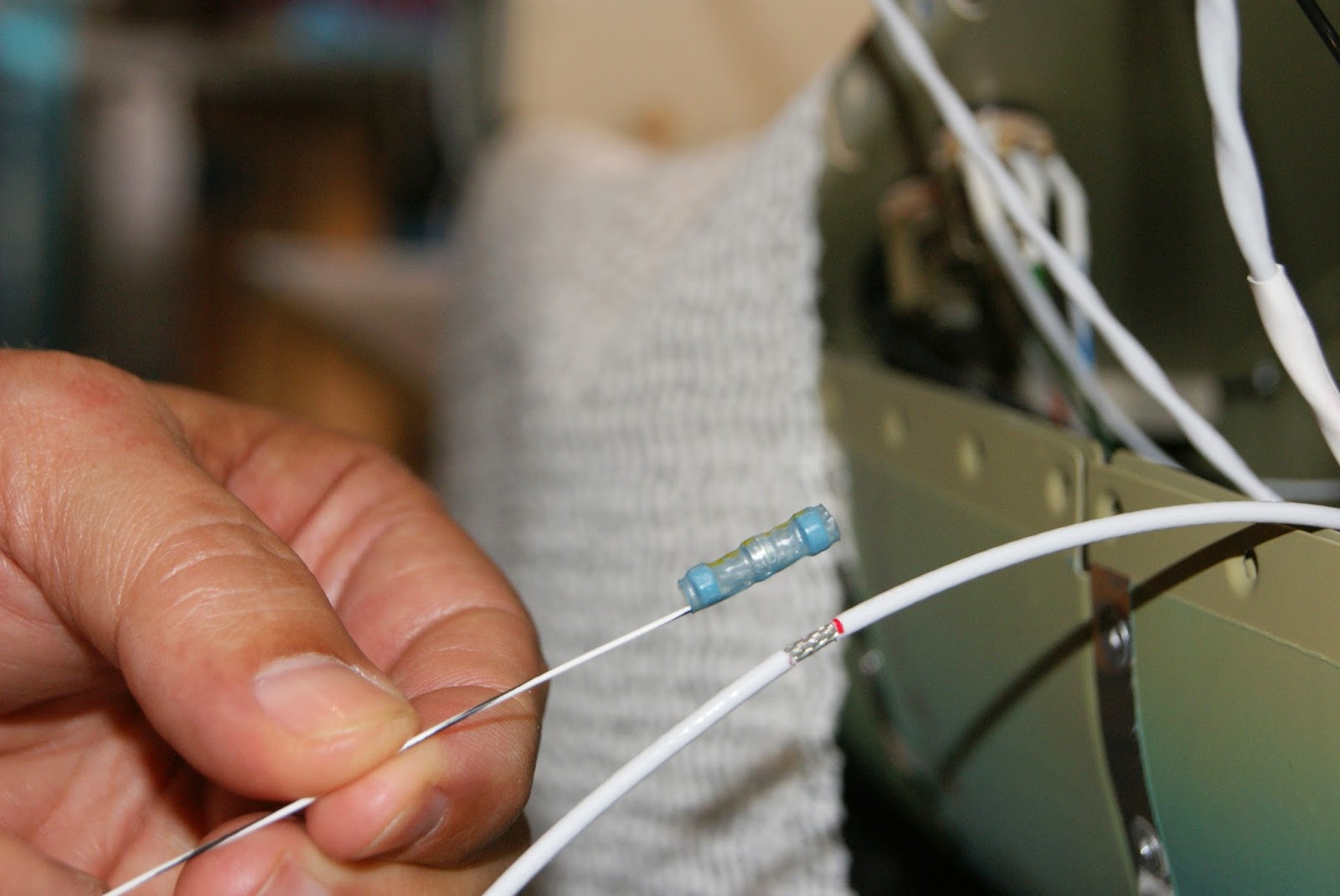 A solder sleeve with a grounding wire attached and the prepped area on one of the shielded cables for the landing light circuit.

For those not familiar with solder sleeves, they come in various sizes, with and without wires pre-attached … I used both styles and photos that show all black wires were wires I added to a bare solder sleeve. Basically, solder sleeves are a special heat shrink material containing a ring of a solder that melts in the center of the sleeve. The outer Tefzel coating is carefully removed from the cable exposing the shielding for the solder ring inside the solder sleeve. The solder sleeve is slipped into position over the exposed shield and a heat gun is used to shrink the solder sleeve and finally after a while the inner solder ring will finally melt fusing the wire to the stranded shield and thus creating a grounding point. Friends – you have to get it really hot with the heat gun before the center ring melts … amazingly, the Tefzel can take the heat.  After each solder sleeve was installed, an ohm meter was used to verify the ground wire made good contact with the cable’s shield and that the two conductors were not fused to each other or to the ground shield. All was well with all the cables. 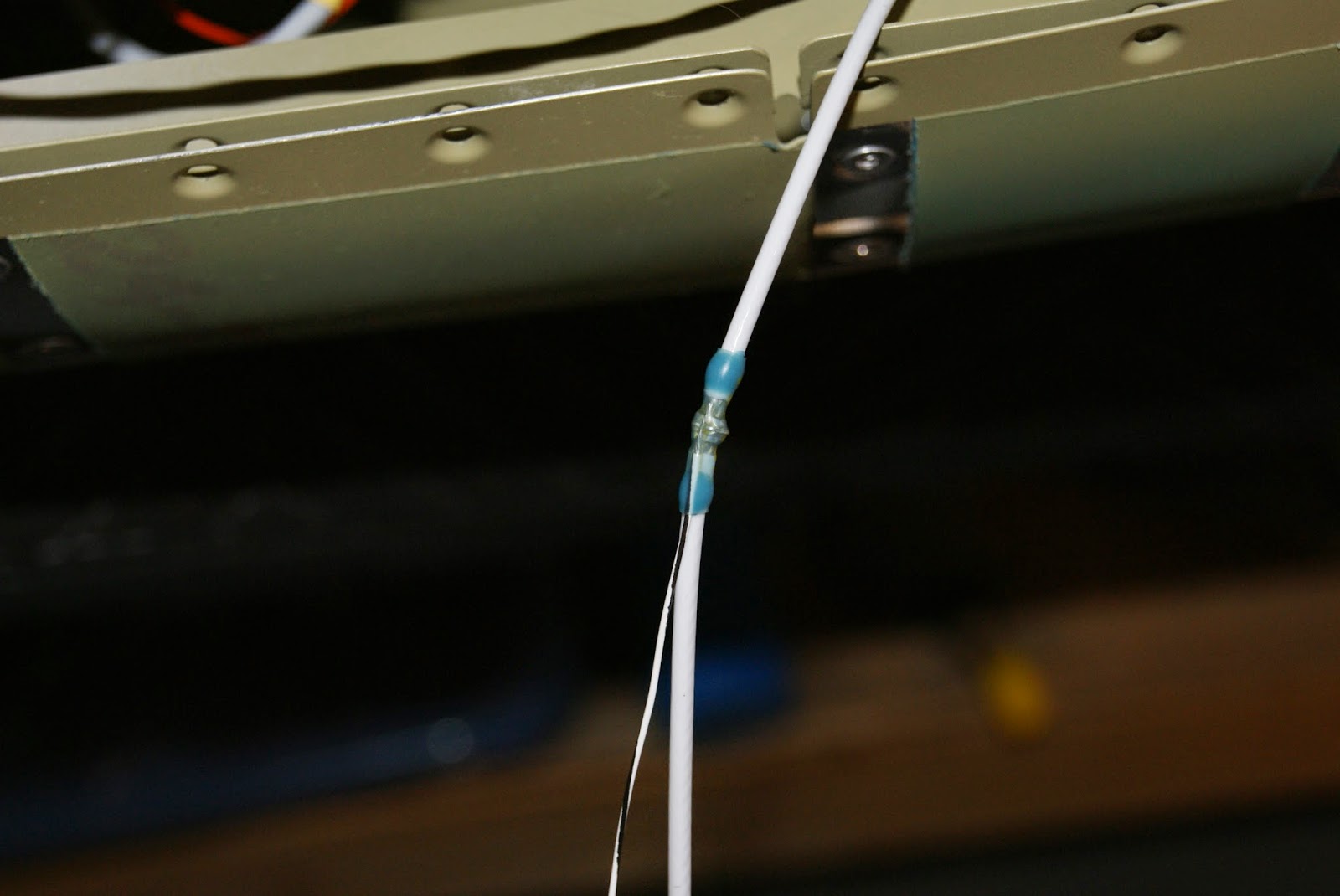 The solder sleeve after being heated with a heat gun.

For the navigation/strobe power wires, decided to fabricate a "T" just aft of the F-1203A bulkhead so the nav/strobe power can be feed from there directly to the left and right electrical connectors. Working with shielded cables and the need for grounding complicates matters a bit, but was able to make a neat splice in the minimum length possible with great results. The shielded cable from the instrument panel was run through the existing wire run to the aft side of the F-1203A bulkhead.  The end of the cable was prepared for butt splices and solder sleeves were used to establish a ground point for each cable. 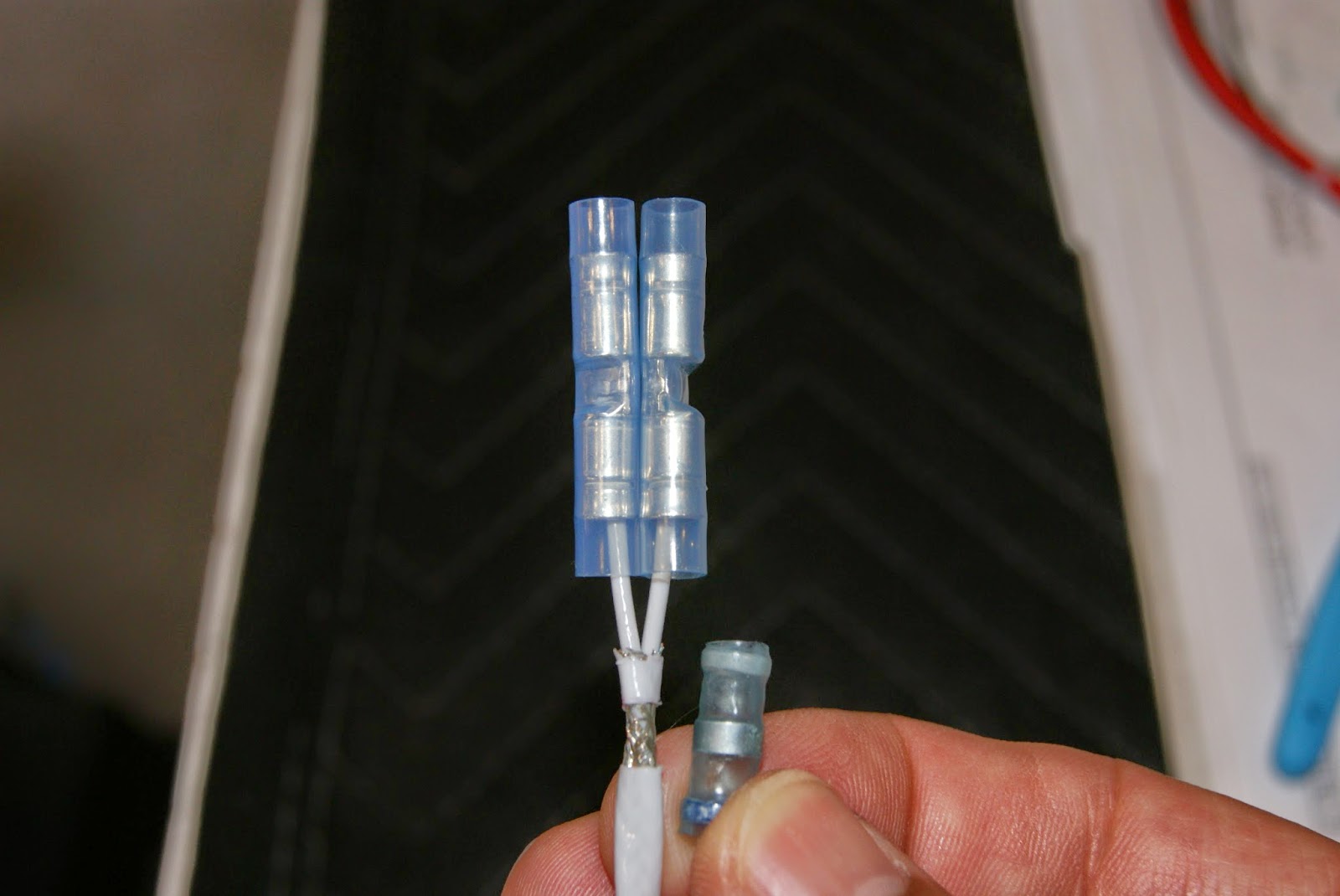 Verifying the measurements for the solder sleeve and butt splices on the 18 gauge two conductor nav/strobe power cable.

The nav/strobe cable going to the left wing was prepared in exactly the same fashion as above and placed in one end of the butt splice along with the cable from the instrument panel and crimped. 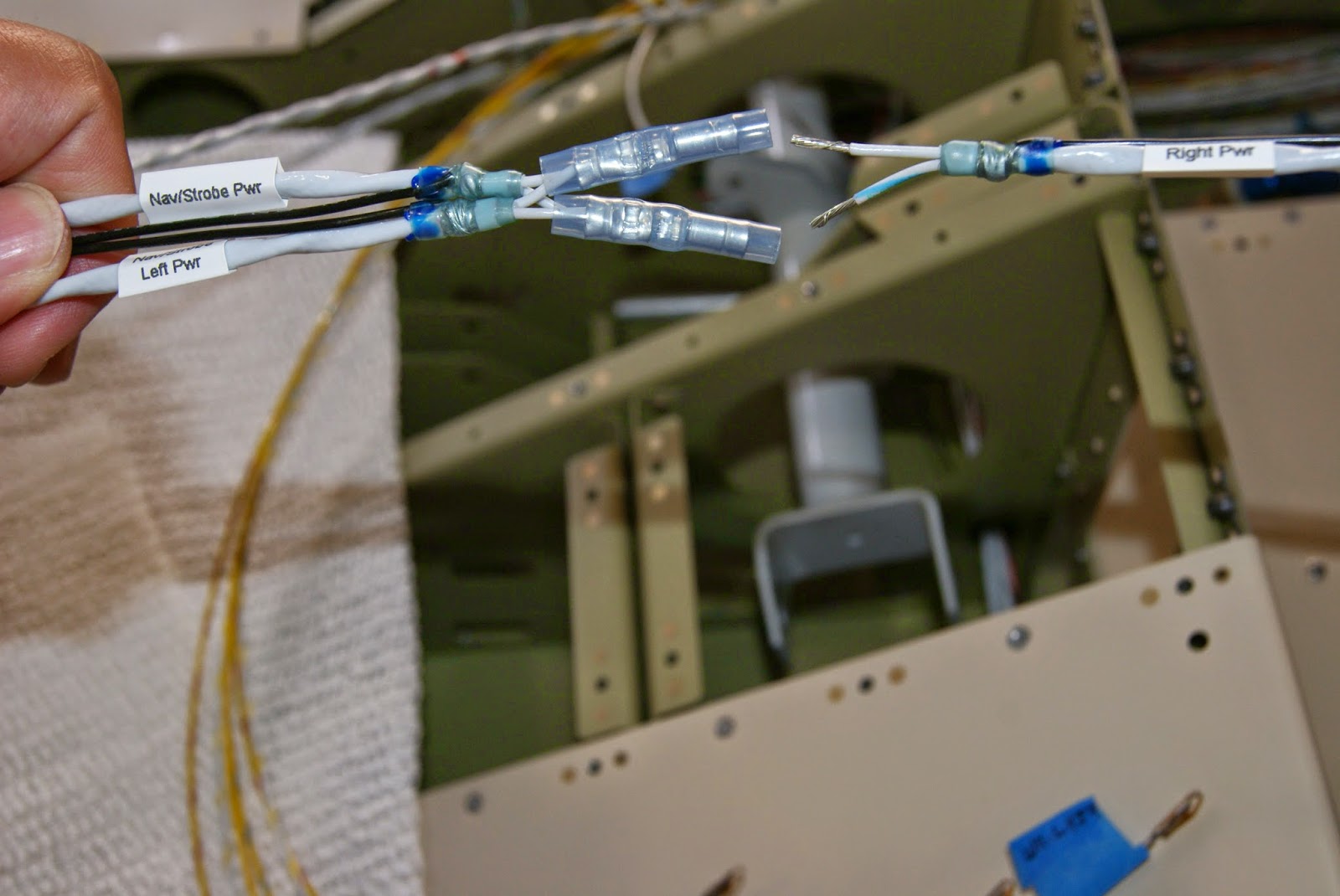 Nav/strobe cable from the instrument panel along with the cable going to the left blue fuselage electrical connector crimped together in the butt splices. 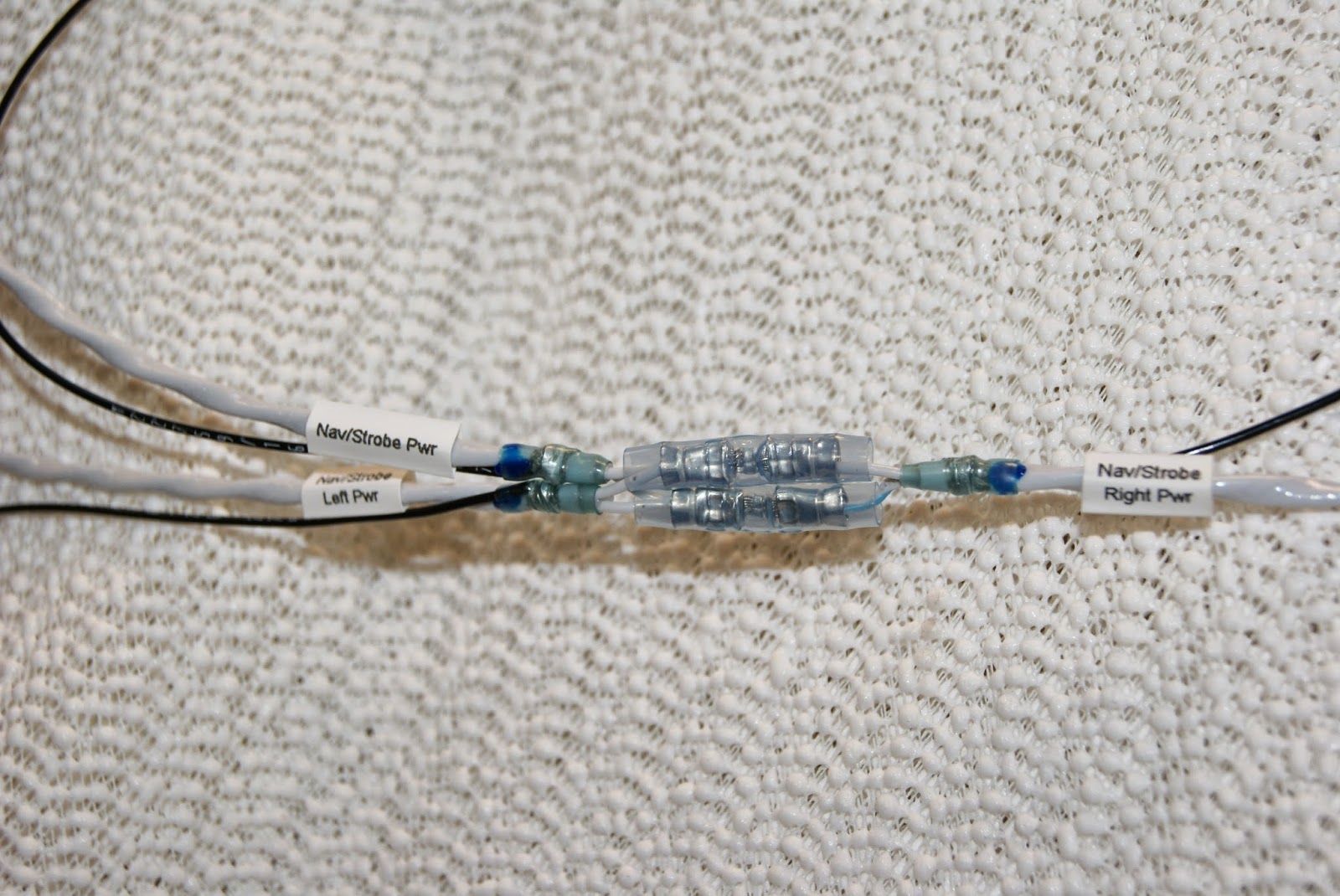 Completed "T" the shielded cable going to the right blue fuselage electrical connector added to the butt splices. Note all three cables have solder sleeves for grounding the sheilding of each cable. 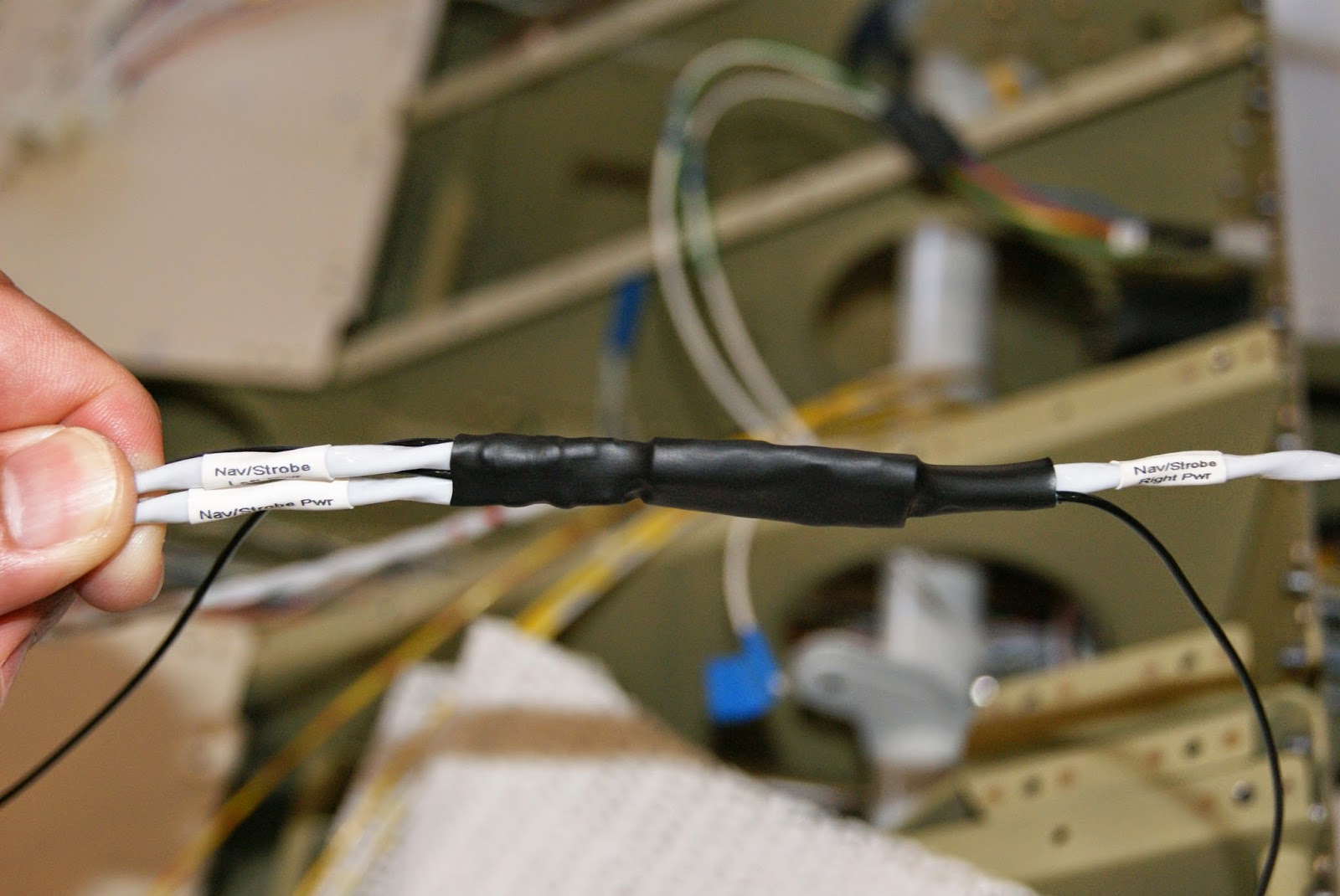 A larger diameter piece of heat shrink tubing was placed over the butt splices to finalize the nav/strobe “T”.

To complete the landing light Wig-Wag wiring a wire needs to be run from the master out on the right landing light to the slave in on the left landing light (think Wig-Wag sync). Additionally, to complete the wiring for the strobe lights, a strobe sync wire needs to be run between both strobe lights. Neither of these wires will carry current because they are in essence data lines, so a 22 gauge two conductor shielded cable will be run between the right and left blue electrical fuselage connectors. 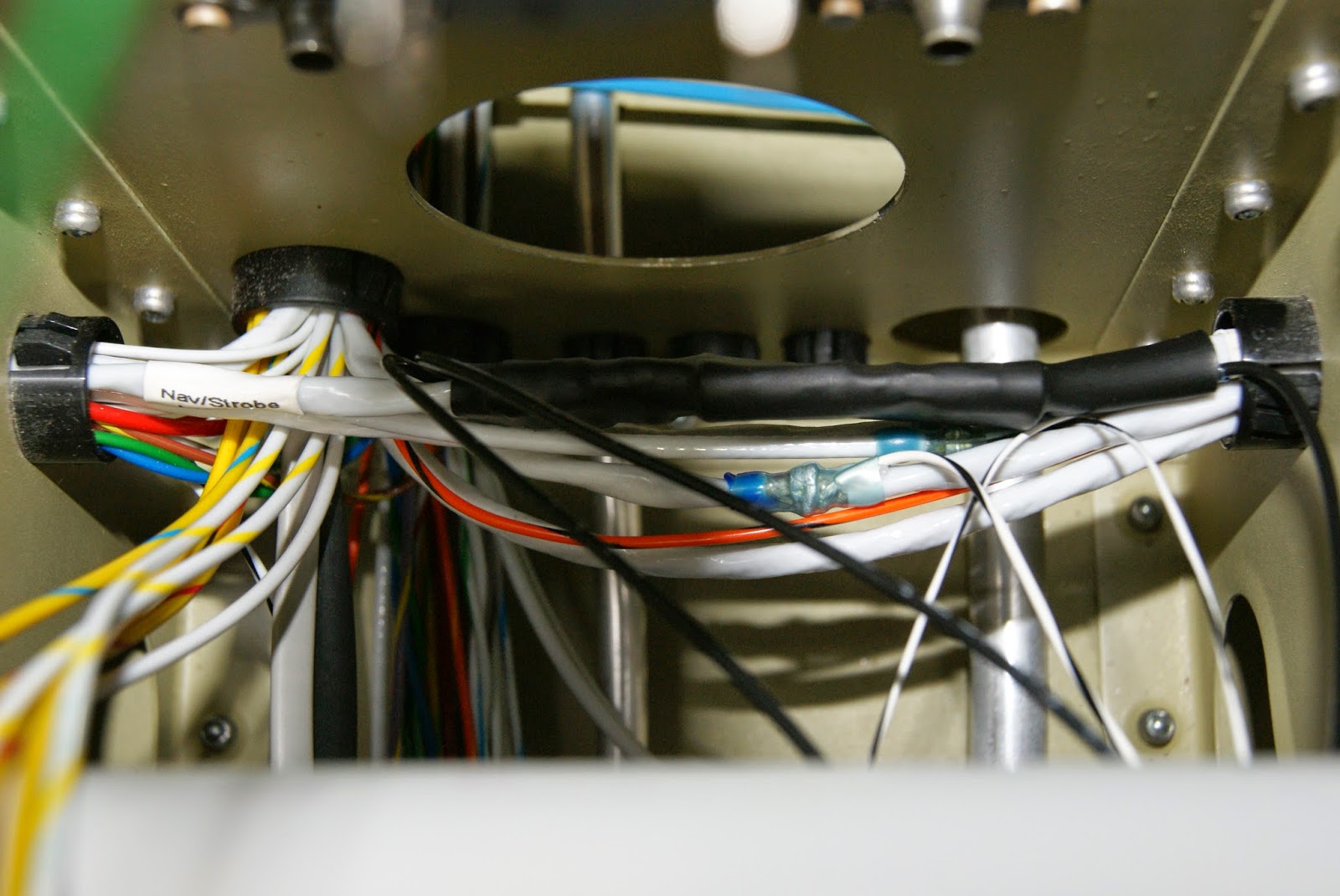