The parts primed with Akzo Friday dried nicely in the heat box. One thing I wanted to do with the wing’s spar pins is spray paint them with a bright red paint … since they are indeed a safety item. Prior to priming the spar pins, the portion of each spar pin that goes through the spar pin bushings was masked off with painters tape … so it was an easy task to spray a little red paint onto the handles over the Akzo primer. 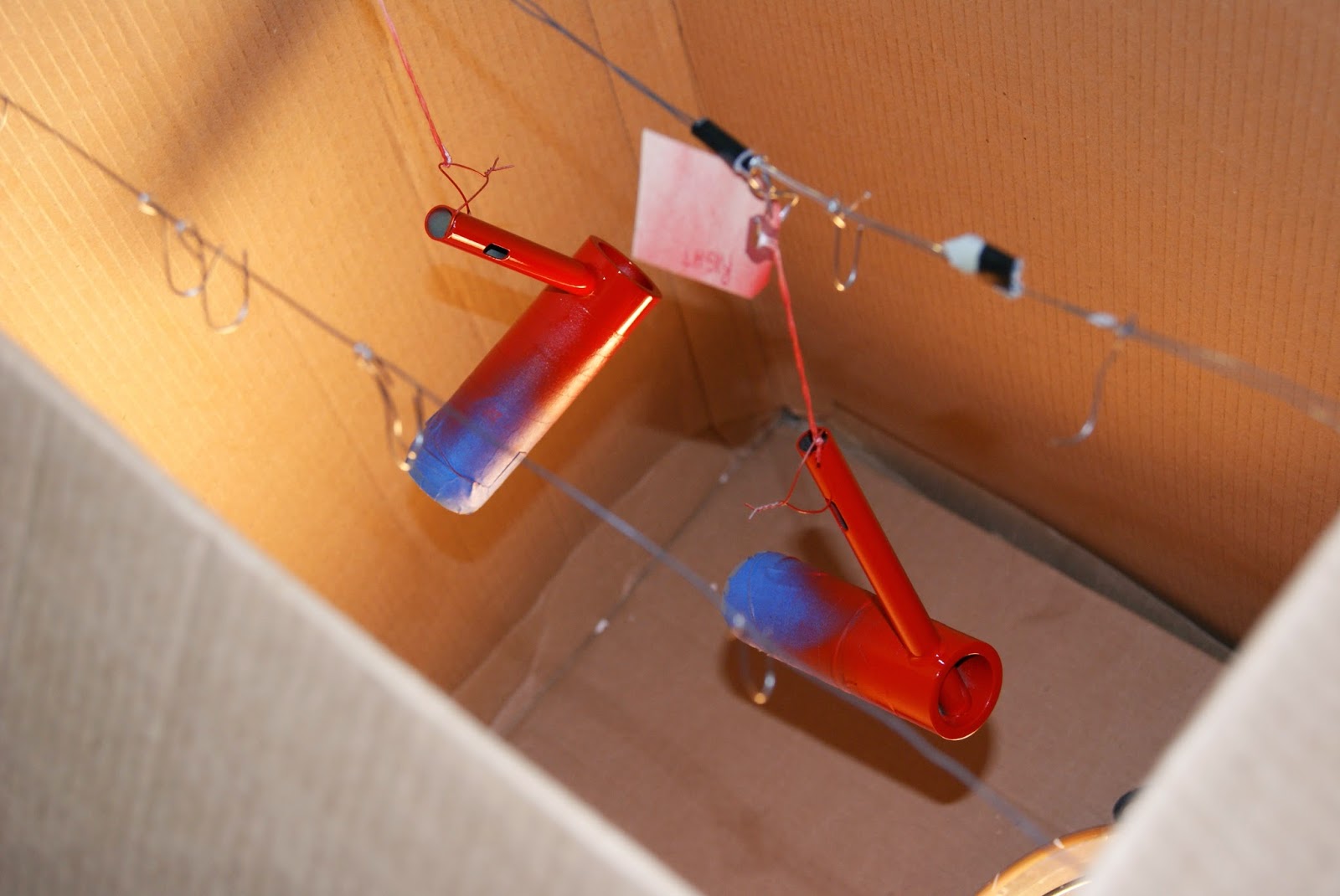 Attacking the routing of the Angle Of Attack tubing ... over the last couple of weeks a lot of thought went into finalizing the routing of the Tygon tubing for the Angle Of Attack indicator. For those builders installing the Tygon tubing for the AOA, there is plenty of room to route the tubing down the center tunnel to the tail cone unless you have installed a static air tube, as is the case with the DOG Aviation RV-12. Unfortunately, with the static air tubing installed, there is really no room left over for the Tygon tubing. An alternative routing for the AOA tubing without going through the now very crowded center tunnel all the way into the tail cone was necessary.  My main concerns were for serviceability and not drilling additional holes …. the later I finally gave up on.

Without going through the center tunnel, running the tubing through outboard lightening holes in the bulkheads was the next choice … but that would require drilling supports to keep the tubing off the metal. So since drilling was required anyway, decided to just drill a hole in two of the three bulkheads and place the holes adjacent to the outboard lightening holes … the third bulkhead already had a tooling hole which was the right size (3/16") for a small SB-178-2 snap bushing.  Another consideration was to support the Tygon tubing without using wire ties because once the side skins are riveted in place, there will no longer be access to cut wire ties ... and therefore no way to replace the Tygon tubing should that become necessary in the future. 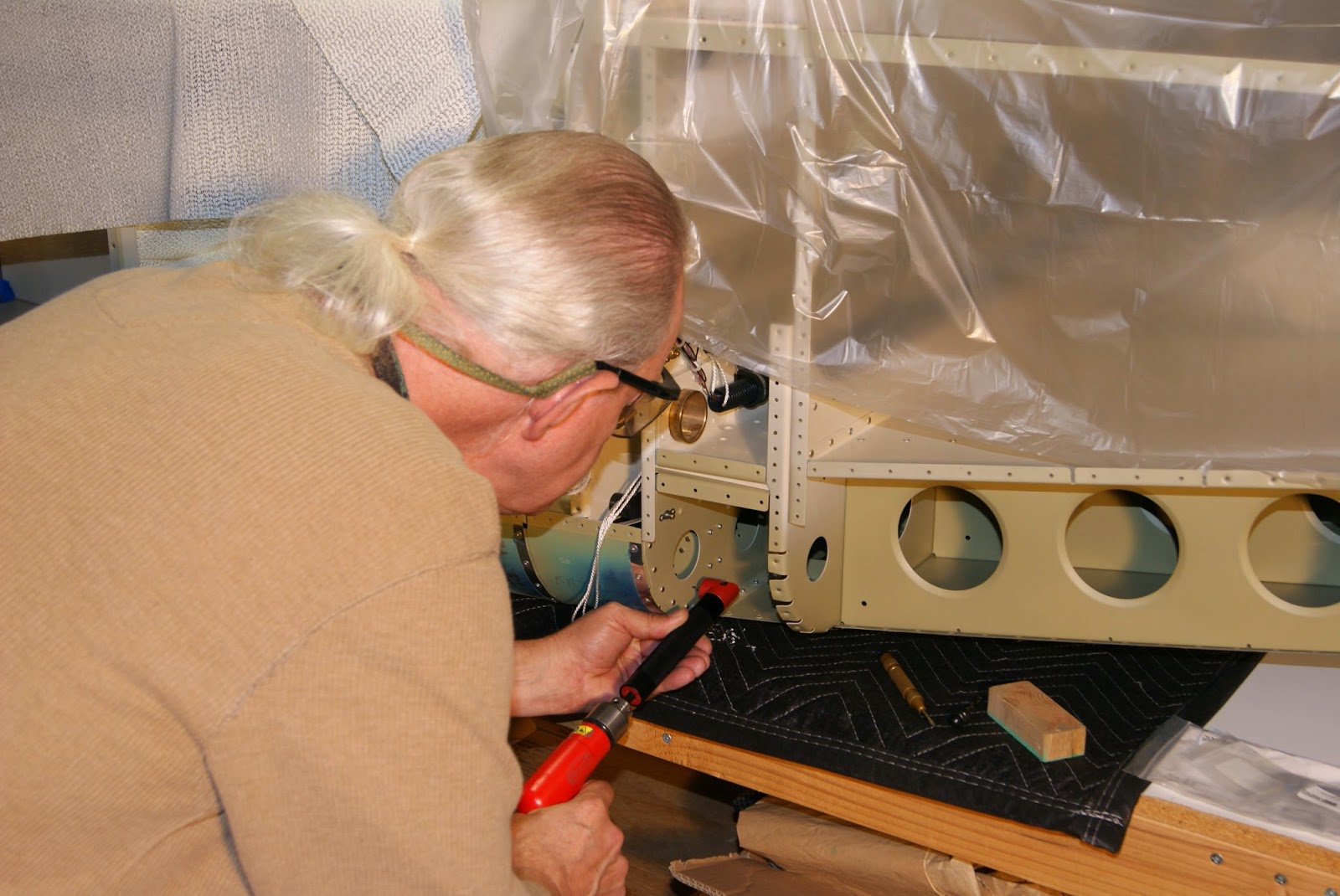 Drilling a #40 lead hole into the center channel’s forward bulkhead below and inboard from the lightening hole.

The #40 hole was stepped up to 3/16" to accommodate the SB187-2 snap bushings. The center channel’s aft bulkhead, seen to the immediate right in the above photo, was also drilled to 3/16" to accept a SB187-2 snap bushing. The holes were deburred and the snap bushings installed. This will provide a straight run from where the wing mates to the fuselage to the tail cone. A wire was fished through the snap bushing in the center channel's forward bulkhead and under the seat pan to the area of the electrical connector. The tubing was slipped over the wire and carefully pulled back through the snap bushing. Of note: A special 3/16" threaded collet was necessary to be able to use the angle drill with a 3/16" drill bit … and even so, the drill bit shank required being mostly removed with a cutting wheel so there would be enough clearance to get the angle drill between the center channel's bulkheads. 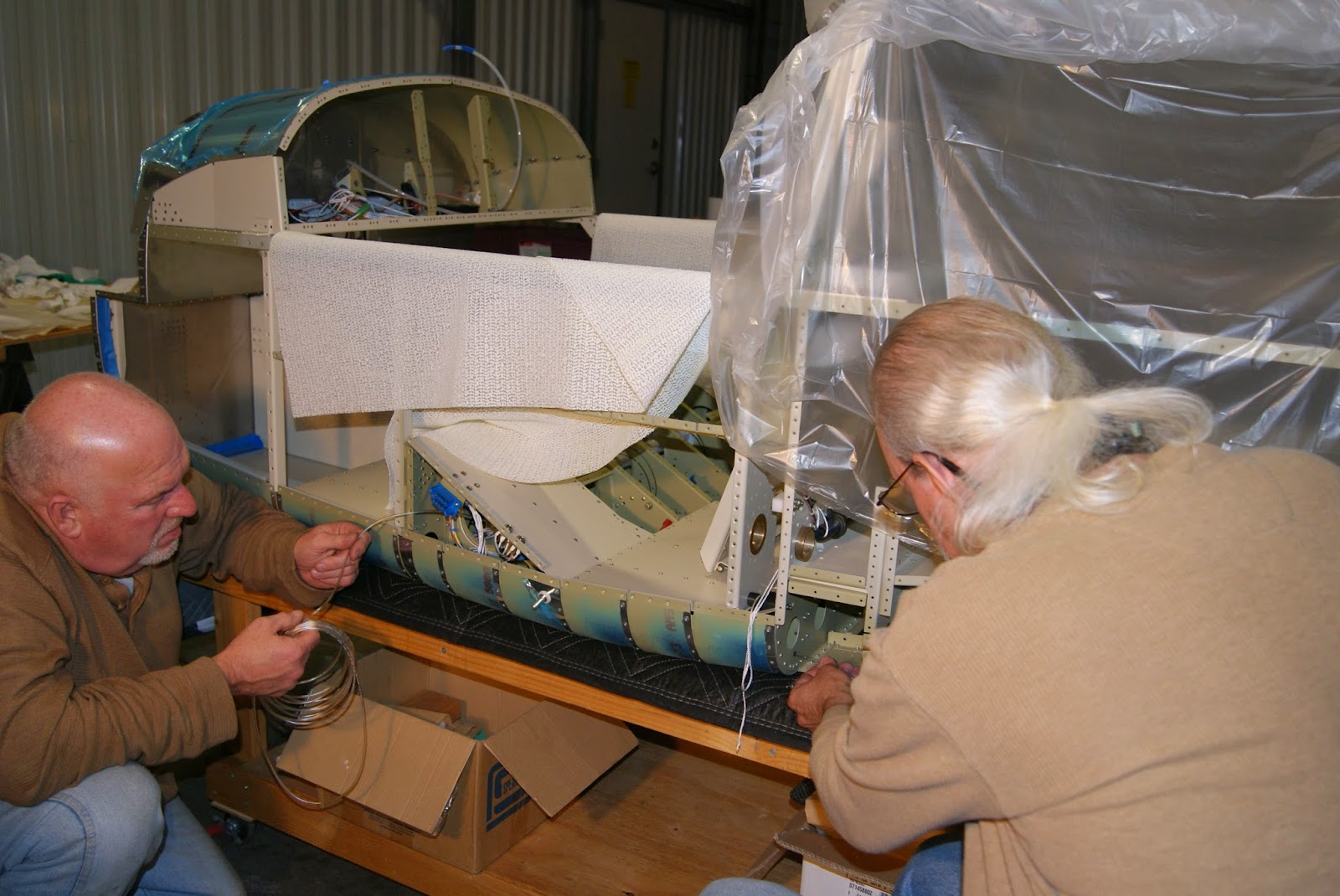 Mike lending assistance by feeding the Tygon AOA tubing underneath the seat pans as I carefully pull the wire back through the snap bushing bringing the Tygon tubing along with it.

The Tygon tubing for the AOA was pulled under the baggage flooring and there was an existing 3/16" tooling hole in the bulkhead that supports the aft wing spar that was used for the third and final snap bushing. The bulkhead that had the existing hole can be seen just in front of my right hand in the photo below. 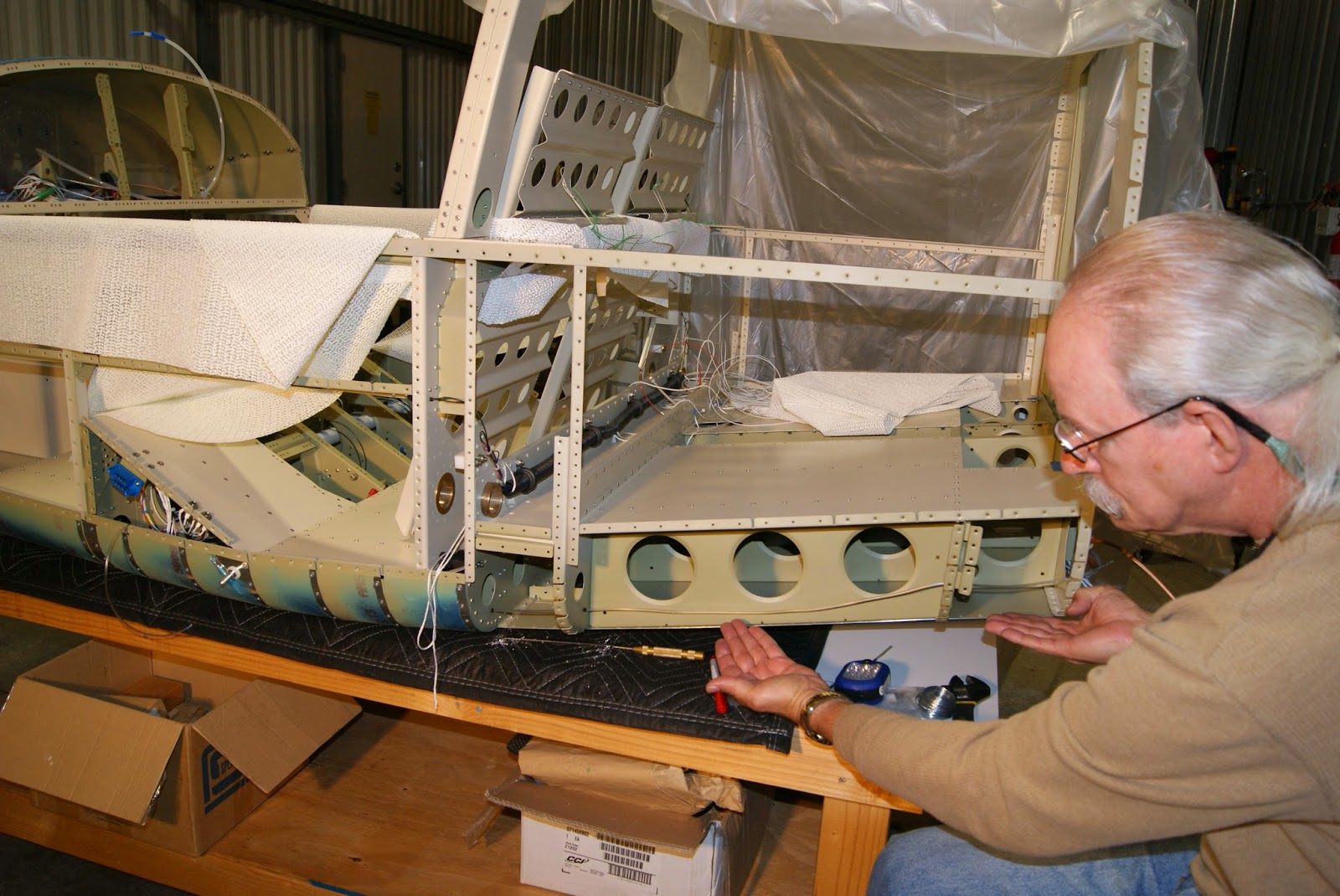 The Tygon tubing run for the AOA can be seen just above my fingers. 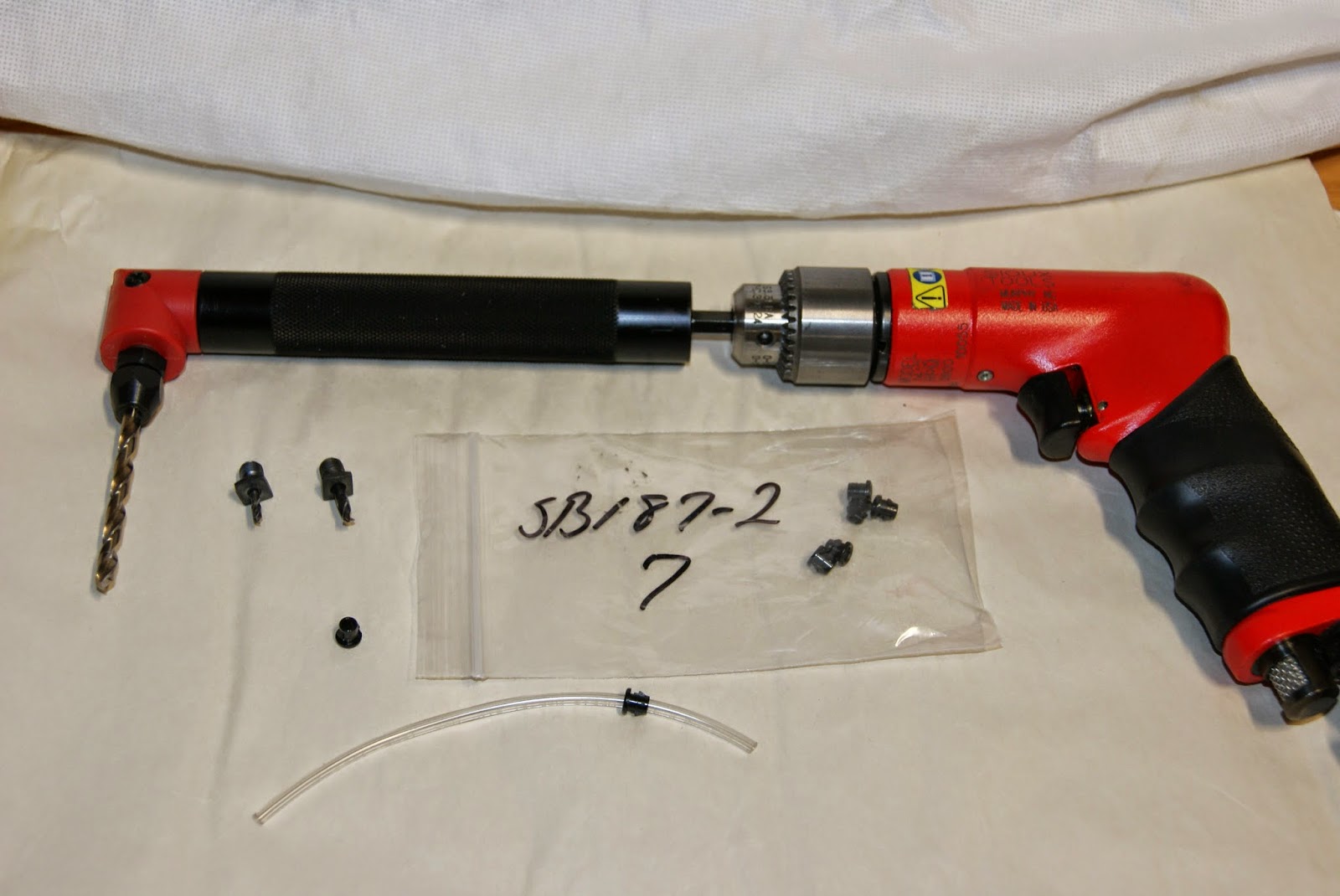 The tools used to drill the bulkheads for the Tygon AOA tubing. The 3/16" collet and shortened 3/16" drill bit is attached to the 90 degree drill attachment. The snap bushings are SB187-2.


Return from the future: Decided to edit this post for those interested in the AOA routing to the left wing so the information would be mostly in one place. The Tygon tubing for the AOA was routed to behind the blue electrical connector on the left side of the fuselage. A 3/16" hole was drilled into the F-000032 side cover just aft of the blue electrical connector so a SB-178-2 grommet could be installed. The Tygon tubing passes through the grommet and receives a Luer Lock quick disconnect. The AOA hardware including the Luer Lock quick disconnects was talked about in the following post: 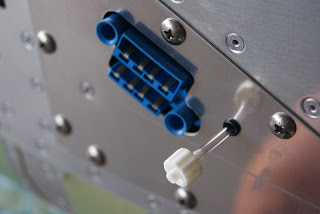 A 3/16" hole was drilled into the F-00032 side cover aft of the blue electrical connector and a tiny SB-178-2 grommet was inserted so the Tygon tubing would not ride on the sharp edge of an aluminum hole. The one half of the Luer Lock quick disconnect can be seen here. 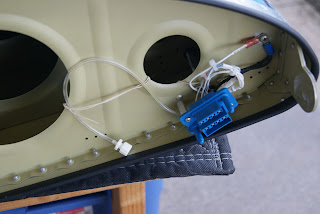 Tygon tubing at the left wing root with Luer Lock quick disconnect attached along with a protective cap. After this photo was taken, a wire tie was used to support the tubing in place of the pull string it is currently on.
Posted by John at 8:19 AM