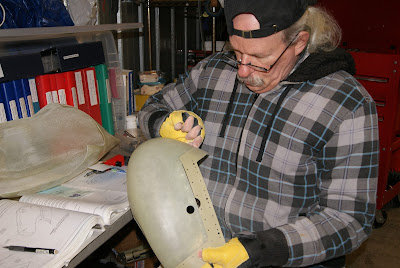 Hand bending the U-00006-B splice strips to conform to the outside shape of the U-00005-A front fairing. 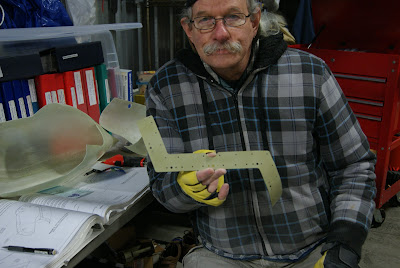 Hand bent splice strip ready for instillation on the U-00005-A front fairing … one down one to go. 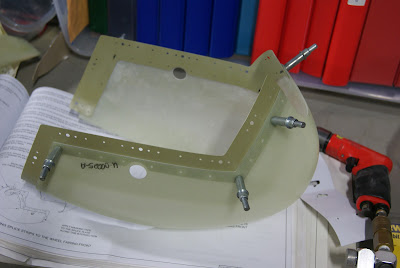 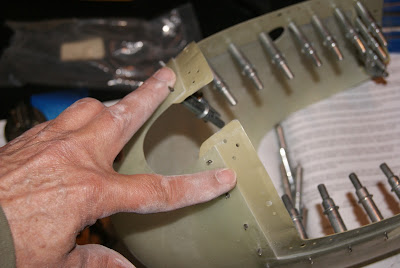 My fingers are pointing to the areas of the U-00006B splice strips that required the most tweaking to allow the aft fairing to seat properly onto the splice strips. 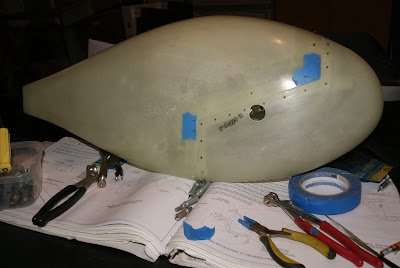 As can be seen here, after tweaking the splice strips the aft fairing mates nicely to the front fairing. More adjustments will be made later after the stiffeners and mounting brackets are installed. Of note, blue tape was placed adjacent to areas that required more sanding and the tape was marked …. when the parts were removed, a little sanding was performed on the areas adjacent to the tape. 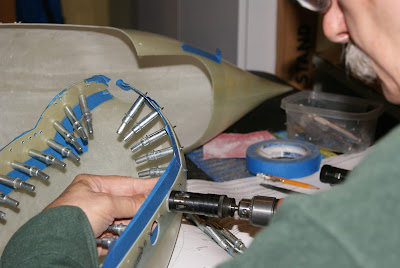 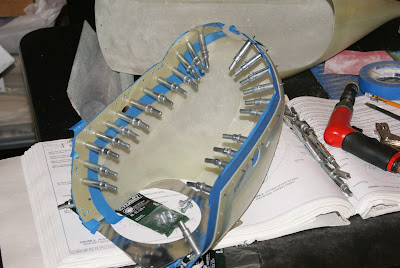 The splice strips and inside of the front fairing covered with masking tape ready for the bonding/riveting phase.


Now that the U-00006B splice strips have been riveted/bonded in place, the U-00006A-1 wheel fairing brackets are riveted onto the splice strips. I deviated from the plans at this point and used AN426AD3-4 solid rivets to rivet the U-00006A-1 wheel fairing brackets to the splice strips. Van’s would have the builder use CCR-264SS-3-2 pop rivets here because the recommended 3” yoke for the rivet squeezer will not clear the bracket. However, there is a longeron yoke in the DOG Aviation tool cart and it clears the bracket enough to allow access so solid rivets can be used. 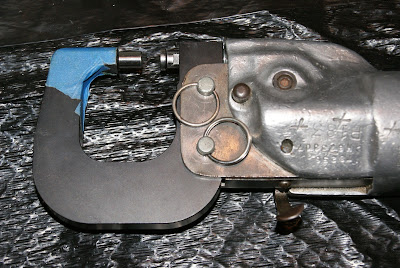 Setup for the longeron yoke – tall rivet set on the yoke and a thin rivet set on the plunger of the pneumatic squeezer. This combination allowed for enough clearance to rivet the wheel fairing bracket onto the splice strip using solid rivets as opposed to using pop rivets. 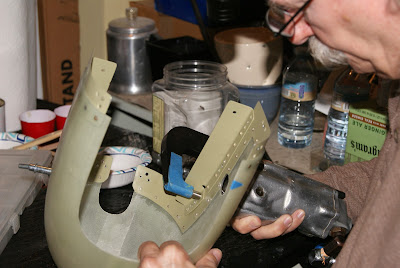 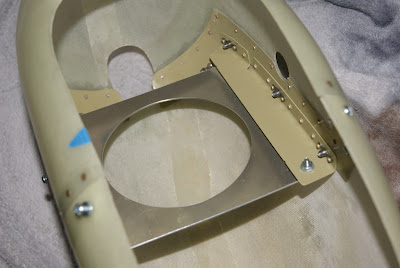 With the U-00006C-1 drill template (bare aluminum) attached, a line is drawn onto the template down along the edge of the U-00006A-1 brackets. Hard to see in this photo because black ink was used, but the line can be seen as a dark shadow. This line will be used as an alignment aid when the aft fairing is removed to allow access for drilling.


Here is where I ran into a BIG problem … The next step calls for dimpling the newly drilled #40 holes in the U-00006A-1 wheel fairing brackets.  I ran into a bit of a problem here that will likely affect all builders that have the new thicker nose wheel fork. The thicker nose wheel fork required Van’s to change the mounting brackets and doublers to accommodate the MUCH thicker material used on the nose wheel fork. The new brackets and doublers have a -1 after the part number and give the builder just barely enough room to create the required dimples. Clearances are so tight, the yoke on the rivet squeezer touches the fiberglass preventing the dimple die from being square with the rivet holes along the outboard edges of the U-00006A-1 brackets. To complicate matters even more, assuming the yoke would have enough clearance, the standard dimple die would not clear the already installed nutplates and, if used, a standard dimple die would cut into the radius or fillet of the bracket and likely create a lopsided dimple that is too shallow not to mention probably creating  a gouge in the fillet. Not good. 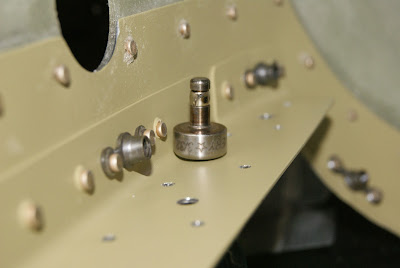 As one can see, even if the squeezer yoke would clear the fiberglass, the rivet holes are too close to the flange on the U-00006A-1 wheel fairing bracket which will cause the male dimple die to cut into the radius or fillet. 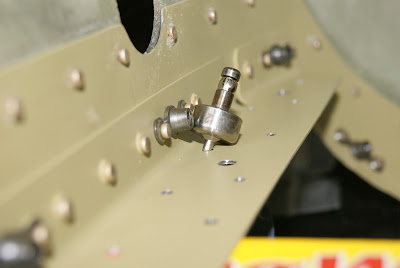 Even assuming the dimple die would clear the fillet, the rivet holes adjacent to the already installed nutplates are so close  a standard dimple die won’t clear the nutplate  … as can be seen here.


To more or less solve the issue, the DOG Aviation Procurement Department ordered a 3/32” close quarters die set from Cleaveland Aircraft Tool … the part number for the dies is DIE4263CQ.  For those not familiar with close quarters dimple dies, the dies are typically used in areas where the yoke on a squeezer is too thick to allow access. Close quarters dimple dies are made with a hole through the center of the dies which allows a nail to be inserted through the dies. The nail is placed in a hand rivet puller and as the rivet puller is squeezed, it pulls up on the nail compressing the two dies together …. thus creating the dimple in the aluminum skin.


There is a small problem using the close quarters dimple dies for dimpling the wheel fairing bracket ….  the bracket is much thicker metal than the dies are designed to dimple. Close quarters die sets were primarily developed for use on control surfaces that are typically made from .016” aluminum. The wheel fairing bracket is much thicker than that … which poses a slight problem because it requires more force to create a deep dimple. The main issue is the copper nails supplied with the dies are WAY too soft for the tension required to form dimples in the thicker aluminum used on the brackets … and the steel finishing nails, although slightly stronger, are also not up to the task because of the tiny head on the nail. My solution was to obtain some 6D 2” box nails which have the same diameter as the holes in the 3/23” close quarter dies. 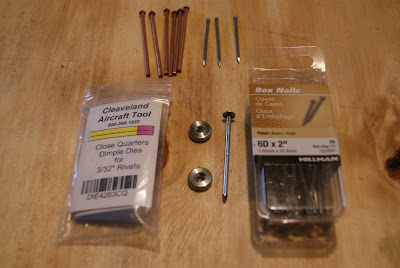 The Cleaveland Aircraft Tool 3/32” close quarters die set comes with the copper nails and steel finishing nails shown on the top row. I purchased the 6D x 2” box nails separately because they can take more force and will dimple the thicker metal on the wheel fairing brackets. The 6D nails will still fail if an excessive amount of force is used … but you WILL have a dimple to work with. 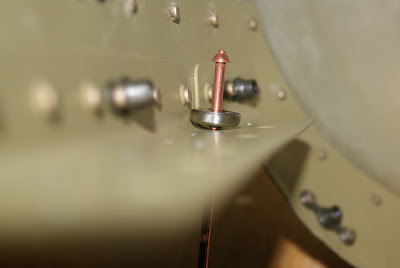 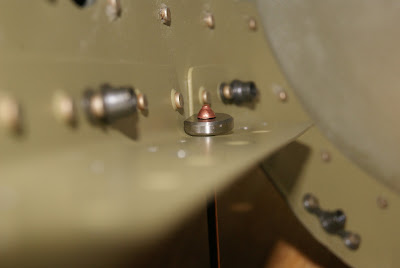 After grinding to create a little taper on one side of the male close quarter dimple die, the die will now clear the radius or fillet on the wheel fairing bracket.


The down side: Because of the thickness of the wheel fairing brackets, the formed dimples were not quite deep as I would have preferred. The simple solution … now that dimples are formed, they can be made a little deeper by using a C clamp. A short nail was used to keep the dies aligned and a C clamp was used to squeeze the dies a little more to tweak the dimples making them a little deeper. 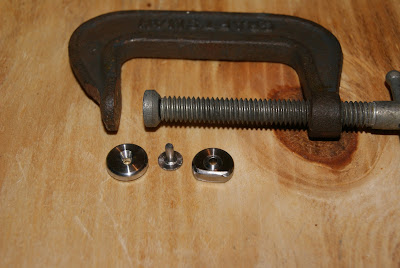 The C clamp, close quarter dimple die set and a short nail will be used to make the dimples slightly deeper. 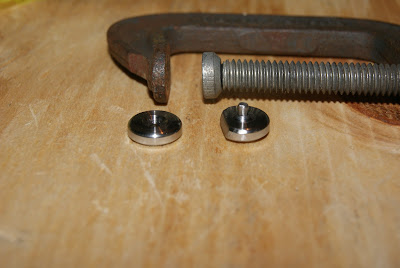 The shortened nail will go into the male die as shown here. 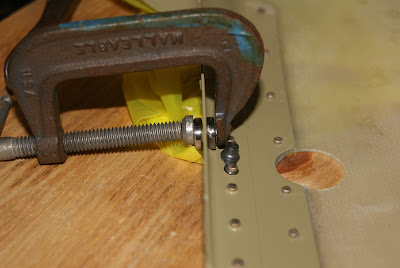 Using a C clamp and the tiny piece of nail to keep the close quarter dies aligned, the depth of the already formed dimple was improved. The curious may be asking themselves “John, why didn’t you use the C clamp in the first place”? Answer … because the male die is tapered, there is no guarantee the dimple won’t start sinking into the aluminum at an angle when using a C clamp …. Pulling a nail that sits flat to the dimple die assures the male die stays relatively centered in the rivet hole as the dimple forms. Once there is a dimple to work with, the male die will be nicely seated and there won't be a chance for the die to wander. 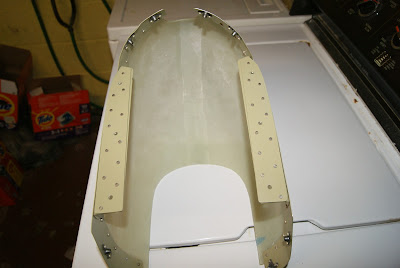 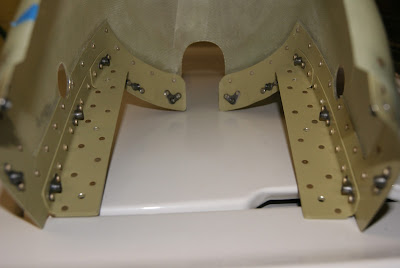 Bottom view of the completed U-00005A front wheel fairing ready for instillation on the RV-12’s nose gear. Note how well the flush rivets on the outboard row turned out … had to unexpectedly jump through a few hoops to get to this point … but now all is well. 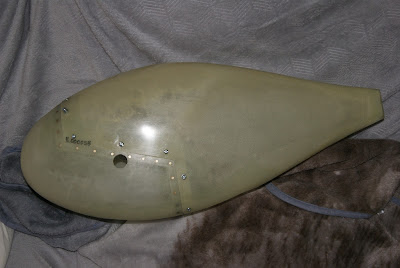 Time to take all the parts to the hangar and begin the final fitting process on the DOG Aviation RV-12. 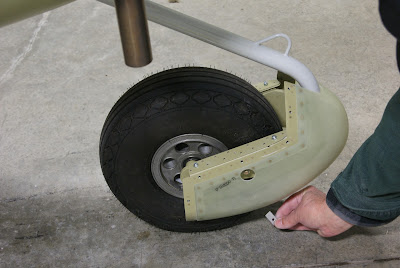 Initial trial fit of attaching the U-00005A front wheel fairing to the U-00006E-1 fairing bracket mounts on nose wheel fork. Fortunately, all the mounting holes aligned nicely.  Here again the ½” wide piece of aluminum will be used as a gauge for obtaining the required ½” clearance between the fairing and the tire. 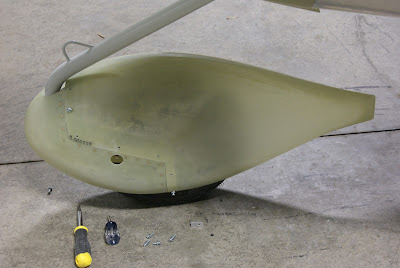 
After the desired fairing clearances are obtained, the next item in the plans calls for working on the U-00007 nose leg fairing trim. HOWEVER, I have decided NOT to install the nose leg fairing trim on the DOG Aviation RV-12. The reason being, I’m not really thrilled about the thought of drilling two holes into the nose gear leg and tapping them for 8-32 threads just so the U-00007 trim piece can be mounted onto the WD-1201 nose gear leg. So I’m taking a pass on this one.


There was one place along the bottom bend of the fairings where the curve was off slightly between the two fairing halves … this was easily fixed by tightening all the screws up and using a heat gun to gently soften the fiberglass while pressing on it with a block of wood to gently reshape the curve. As can be seen in the above photo, the curve is now perfect.


At this point, other than paint, the nose gear fairing is complete!!!.
Posted by John at 3:00 PM