Although Van’s Aircraft offers a wheel pant kit for the RV-12, the kit does not include fairings for the RV-12’s gear legs. Interesting enough, Van’s does offer gear leg fairing kits for other RV models. A savvy RV-12 builder in South Africa figured out the gear leg fairing kit Van’s offers for RV models that use round gear legs just happens to work quite well to cover the RV-12’s main gear legs even though they are not round gear legs. In addition, intersection fairings were custom molded for the RV-12 to create a professional finished look.


The main gear leg fairings that will be installed on the DOG Aviation RV-12 can be obtained from Van’s Aircraft by ordering GEAR LEG FAIRING ROD. You will receive two fairings, hinge material, rivets and assembly drawings which you may as well throw away because the dimensions shown on the drawing apply to most of Van’s aircraft models other than the RV-12. So one has to wing it, so to speak, because you are on your own when it comes to figuring out the measurements needed. 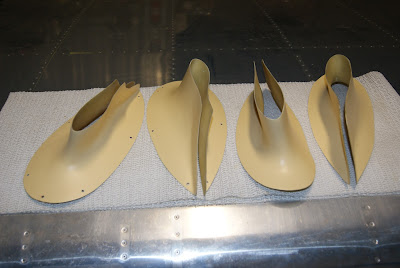 The RV12 Main Gear Intersection Fairings part number RVB-INT12 purchased from RV-Bits in South Africa. They are nicely molded, fit quite well and easy to tweak with a heat gun.


Because the Van’s gear leg fairings are intended for airplanes larger than the RV-12, they are way too long for the short RV-12 gear legs and will require some cutting. To aid in determining how much material needed to be removed, the RV-Bits intersection fairings were temporally clamped around the right gear leg so measurements could be taken. I settled on 17” as being the sweet spot where the gear leg fairing could be inserted deeply into the intersection fairings yet clear the fuselage on top and sit just above the bend of the gear leg on the bottom. 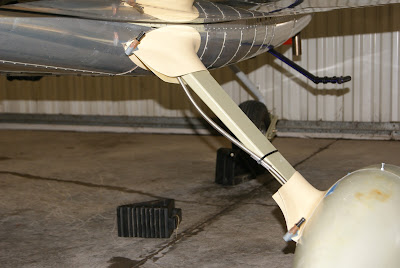 A trial fit of the RV-Bits intersection fairings on the right main gear without the gear leg fairing in place. Measurements were taken and 17” appears to be a good length for the gear leg fairings. The fit at the wheel pants is spot on perfect … the fuselage fairing fits quite well but the fit could be improved with a little heat gun tweaking. 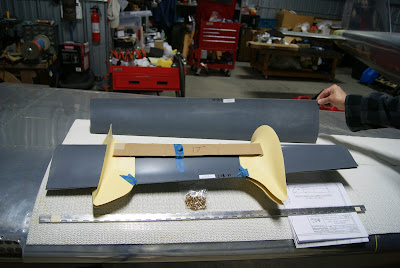 
After cutting the Van’s gear leg fairings to a little over 17”, I proceeded to cut the excess material on the back edge of the U-817 gear leg fairings to the trim lines on the fairings. My suggestion to fellow builders is to NOT trim to the scribe lines until after the hinge material is match drilled. If the excess material is not cut, it makes for a great place to drill a few holes and use Clecos to keep the aft edges of the fairing tight during the hinge drilling process. I had to use tape to keep the aft edges of the fairing tight and needed to keep checking to make sure the aft edge was being held tight …. it would have been much better to use Clecos and not need to worry about the edge staying tight during the hinge drilling process.


The reason for the hinge material is it allows an easy way for the fairing to be secured onto the landing gear leg and allows for easy instillation/removal … just stretch the fairing open, slide the fairing over the gear leg and insert the hinge pin to keep the fairing snug to the gear leg. The hinge material was cut to length and center lines were placed on the outer edges so measurements could be taken as to where to drill the holes. Life here used to be a lot easier when Van’s shipped fiberglass components without the gelcoat. Before, one could place the hinge inside the faring and see through the fiberglass and know exactly where to drill. Now with the opaque gelcoat on the parts, lots of measuring and marking is required. I decided to make the edge of the hinge flush with the bottom edge of the gear leg fairing at the wheel end of the fairing. Using that point as a reference, a line was drawn across the fairing and measurements were made so the hole spacing for the rivets worked out to 1 ½”. 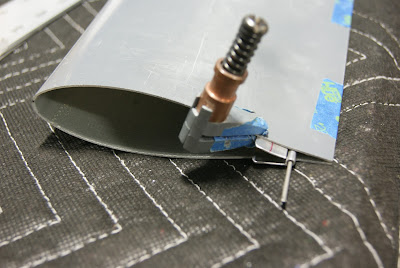 A centerline was marked onto the hinge material so it could be transferred onto the fairing to create a drill line. 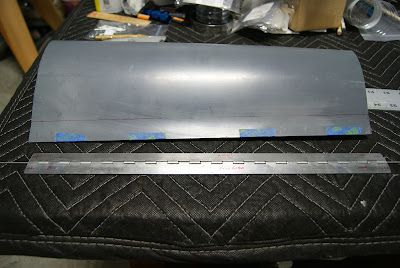 
The drilling process began by inserting the hinge and pin assembly into the fairing and clamping the hinge in place with Cleco clamps ... making sure the hinge was tight to the aft edges of the fairing which were being held tight with tape. (As previously mentioned, it would have been far easier to have temporarily left the excess material on the aft edge of the fairing and drilled holes for Clecos  as opposed to using tape to keep the aft edge tight ... then trim to the trim line after the fairings are drilled for the hinges). The outer edges were drilled first so Clecos could hold the hinge in position as the remaining holes were drilled. I drilled each hole one at a time using a two-step process of first drilling a tiny lead hole, then stepping it up to #40, securing with a Cleco and moving on to the next hole. 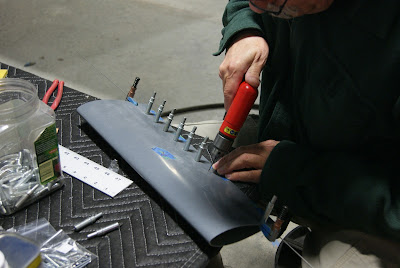 Drilling through the gear leg fairing and into the hinge material underneath using a tiny drill bit. The tiny hole was then drilled to #40 and the hinge secured with a Cleco. Make sure to keep both hinges together using the hinge pin during this process to insure the hinges are held in position during the drilling process. 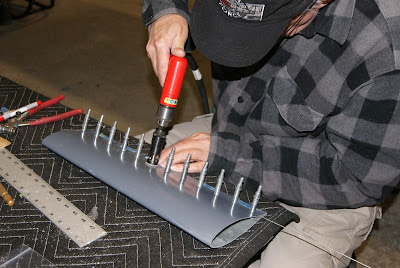 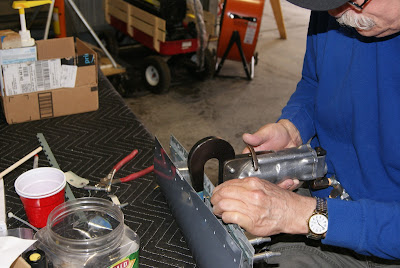 Riveting one of the hinge strips onto a gear leg fairing. 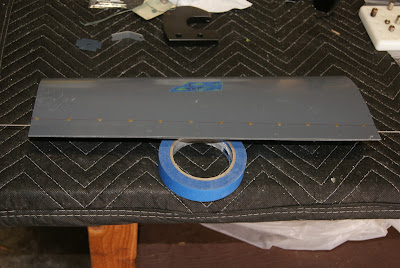 Completed U-817 gear leg fairing with the hinge material riveted in place and the hinge pin inserted. Very pleased with the tight fit all along the aft edge of the fairing.


Also of note, I decided to drill a #40 hole for use as a point to attach safety wire that will capture the hinge pin and prevent it from backing out of the gear leg fairing. I truly don’t think this is really necessary because with the RV-Bits lower intersection fairing installed, there is really no place for the hinge pin to go … but from a safety aspect, decided to include a location for securing the hinge pins. 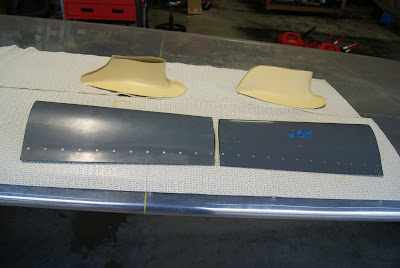 Both gear leg fairings completed and ready for a trial fitting with the RV-Bits intersection fairings. 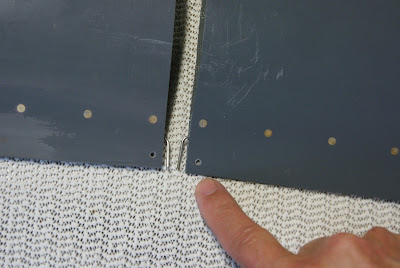 The hole my finger is pointing to along the bottom edge of the U-817 gear leg fairing will be used as a location to secure safety wire … the wire will prevent the hinge pin from backing out. This area is covered by the RV-Bits intersection fairing … so it will be well hidden.


With the hinge assemblies now riveted onto both U-817 gear leg fairings, it was time make a trial run and fit the gear leg fairings over the RV-12’s landing gear. The initial trial fit went quite well, the RV-Bits intersection fairings were almost a perfect fit. There was one spot on the right intersection fairing that responded well to a little tweaking via the heat gun to obtain an overall great fit. 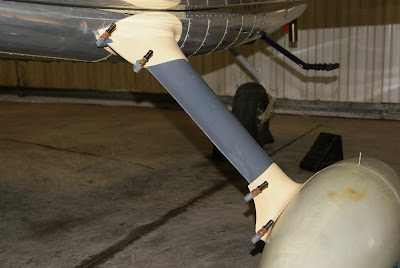 Initial trial fit of the gear leg fairings on the RV-12’s right gear leg along with the RV-Bits intersection fairings. As one can see from this photo, the initial trial fit looks darn good. 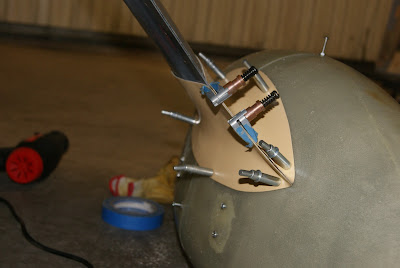 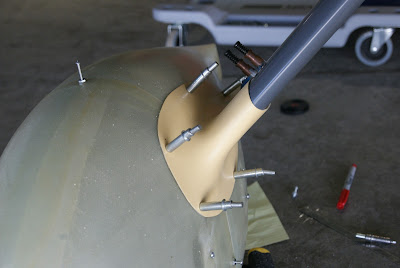 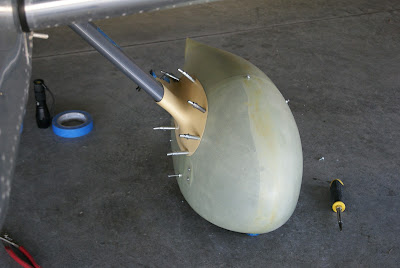 As can be seen in this photo, the overall fit of the RV-Bits intersection fairing on the left wheel is another nice fit. 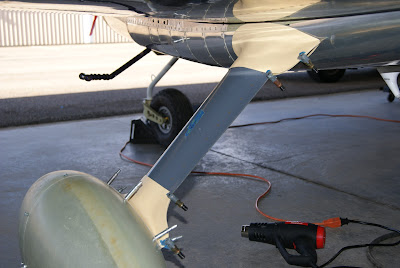 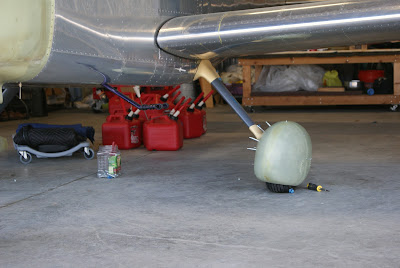 
I’m still debating on how the fuselage intersection fairings will be attached to the fuselage. There are a few options to consider … so have not drilled any holes yet. I can think about that aspect while the RV-12 is being painted.


For just a little effort adding the gear leg and intersection fairings gives the Van’s RV-12 wheel fairing kit a much needed finished look … as can be seen in the following photo. 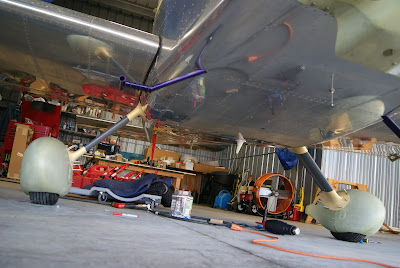 I think most would agree that the RV-Bits intersection fairings paired with Van’s U-817 gear leg fairings give the DOG Aviation RV-12 main gear legs a truly finished look.


The gear leg project was finished just in the nick of time … because the airplane is now at the paint shop.