One of the only complaint most RV-12 owners have had about the RV-12 is purely cosmetic …  it has to do with the unfinished look of the horizontal stabilator’s outboard edges. Quite a few years back the owner of a RV-12 decided to do something about the unfinished look of the stabilator and made a mold to create stabilator fairings for the RV-12 made from rugged ABS plastic. Early on during the building of the RV-12, the DOG Aviation Procurement Department purchased a set of the stabilator fairings for the RV-12 … yet another project that required completion prior to the RV-12 heading to the paint shop. 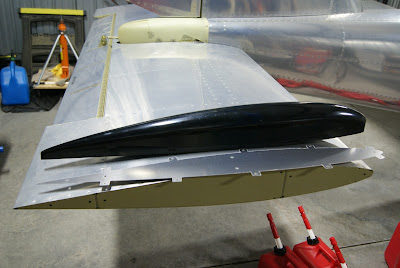 A photo from Van’s WEB site showing the newly developed stabilator tip fairings for the RV-12iS. It is hard to see from this photo, but Van’s stabilator tips slide under the stabilator’s skins and can be installed on legacy RV-12’s by installing new outboard ribs on the stabilator. 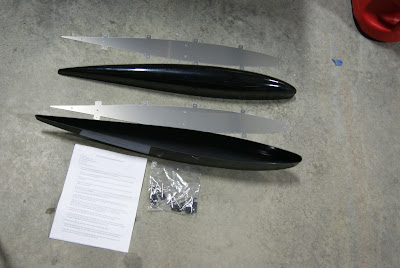 The ABS stabilator tip fairing kit purchased for the RV-12 consists of two metal mounting plates, two ABS tip fairings, a bag of mounting hardware containing screws, rivets and tinnerman nuts (which I’m not a big fan of and will likely change out for a threaded version) and instructions. 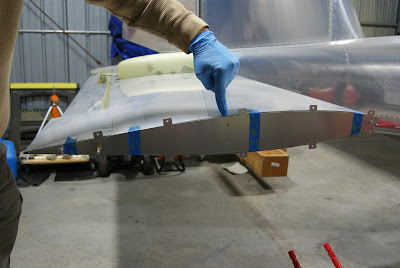 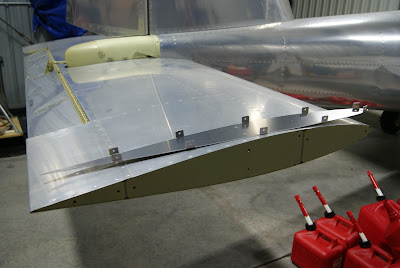 Photo of the mounting bracket after all the tabs have been bent.

The mounting bracket is once again temporarily “pinned” onto the outboard ribs of the stabilator and the ABS tip fairing is slid over the now bent tabs tabs for a trial fit. Odds are it will be necessary to sand some material off the edges of the tip fairing. In my case, material needed to be removed from the front and aft portions in order to obtain a tight butt fit with the stabilator. I found it quite easy to sand the fairing quickly by placing some sticky sandpaper on the workbench and sliding the fairing across the sand paper until enough material was removed from the ends that the center of the fairing just began losing material. At that point there was a nice straight edge to work with. 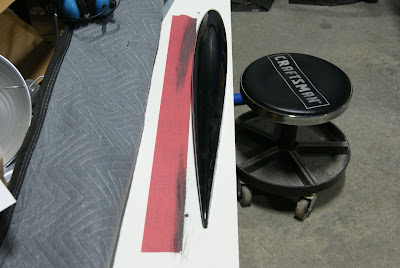 Looking at the above photo the viewer can see material was removed from the forward and aft portions of the fairing by sliding the edge of the fairing back and forth across the sandpaper. I continued sanding until streaks began to appear in the clean center area of the sandpaper at which time the edge was totally flat. 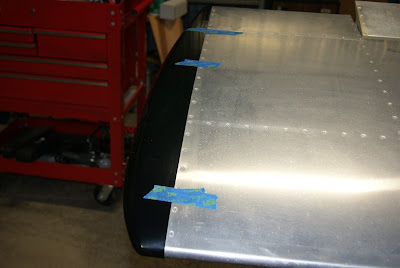 Trial fit after sanding. The upper portion of the fairing has a nice, tight, almost perfect butt fit to the stabilator as can be seen here. The fit on the underside is not quite as good as it has a slight gap in spots but not enough to be of concern so, I decided to move on.


After fitting removing and sanding the fairing tip a few times to achieve a good fit, the ABS fairing was removed so the mounting bracket could be riveted onto the outboard edge of the stabilator. 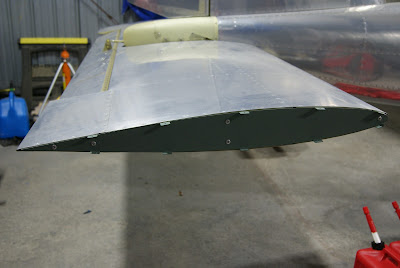 The stabilator fairing mounting bracket primed and riveted in place on the stabilator’s outboard ribs. 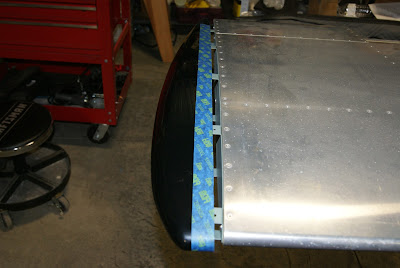 Tape is placed along the edge of the stabilator fairing and the fairing is slid over the tabs but not so far as to cover the holes in the tabs.  Measurements are made and marked onto the tape denoting the location of each mounting hole that needs to be drilled. 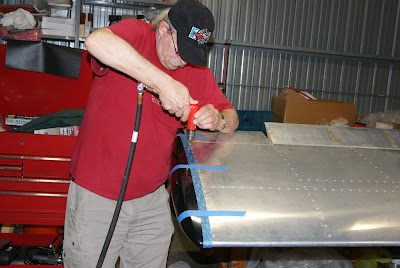 Just realized a photo was never taken of the completed stabilator prior to moving the RV-12 to the paint shop. But below is a photo of the fairing setting on the mounting tabs which is representative of the finished look. 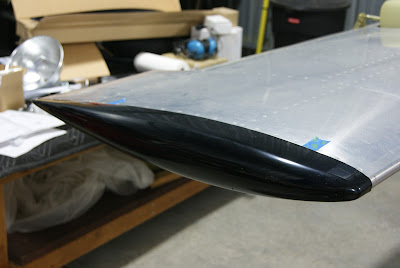 This photo was taken just prior to drilling the mounting holes into the fairing. It is representative of how the fairing looks when installed on the stabilator.


All and all installing the ABS plastic stabilator tip fairings went fairly fast and the end result looks quite good. Think most would agree, having the stabilator tips installed on the RV-12 certainly looks WAY better than the original look.