It has been said many times, necessity is the mother of invention.  While building a slightly modified version of the EAA workbench (6’ x 3’ as opposed to the standard 5’ x 2’) the DOG Aviation fabrication department used assembled research as a starting point for what morphed into an EAA based “Transformer” High-N-Low workbench. Height including the ¾” top is 33 ¾” in the high position and 21 1/8” in the low position. Basically, the 33” legs of the standard EAA bench are now 20 3/8” for the upper leg and 12 5/8” for the lower leg.  Another deviation from the standard EAA workbench consists of the top overhanging the frame by 3” on one side and one end of the workbench to allow for easier clamping of parts to the work surface. The reason for not overlapping all the way around the workbench is to allow the clamping of two workbenches together either side by side, or end to end. 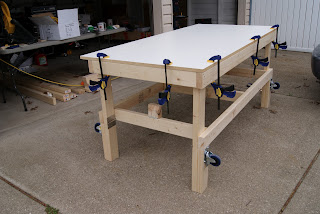 Workbench in the "High" position 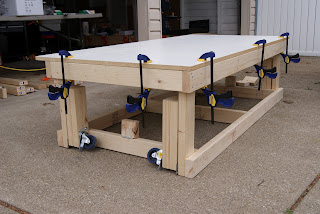 Workbench in the off wheels legs folded "Low" position 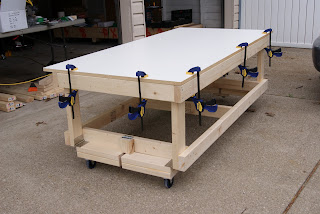 Workbench on wheels in the "Low" position 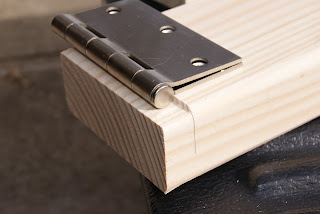 Rube Goldberg would be proud of the ergonomic “Green” design which saves a fraction of one pine tree due to the High-N-Low being two workbenches in one. It was decided the locking casters would be better utilized in the Low profile “wheels down” position because once the wings are assembled, they are typically stored in a rack and all but forgotten for at least a year. Having the wheels functional in the Low profile should allow the ability to easily move the fuselage around to accommodate various phases of construction.


Of course, there were inherent issues that needed to be resolved … a flip down leg lock was needed to keep the wheels down on the floor … a latch is necessary to keep the lower legs from flopping around when rolling the workbench on uneven surfaces (one would think there would have been enough weight on the leg lock, but not so) ...  and lastly as a precaution a piece of EMT tube is used to prevent the lower leg from folding in while in the “Hi” position. 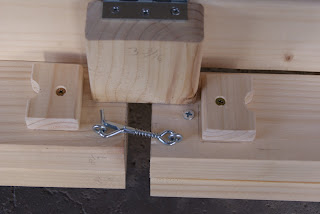 In the center is the flip down leg lock for keeping the wheels
down. The gate latch prevents the legs from bouncing when
rolling over uneven surfaces. The two blocks with the cutouts
are for holding a piece of EMT pipe which locks the lower
legs open while in the "HI" position. 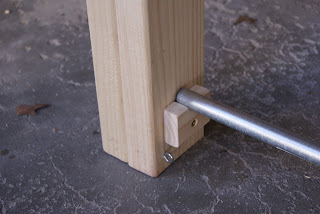 EMT leg lock in place while workbench is in the "Hi" position. 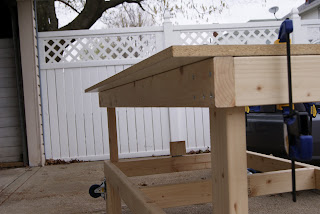 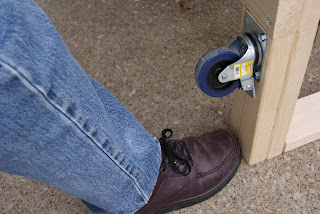 One might think that the wheel hanging from the lower leg
when the bench is in the "Hi" position would be a nuisance ...
not so! The wheel is high enough you never hit it with your
shoes and because of the 3" overhang on the workbench the
wheel does not come close the shin because the overhang
forces you to stand back. So yes, the wheel hangs out but it is
not in your way at all.

Return from the future – A few thoughts. First- If I had it to do over again I would have made the overhang go all the way around the bench it would make clamping items much easier. For building the RV-12, I really have not had to clamp the benches together except for working with the flaperons and now feel a clamping overhang all around the bench is a more useful option. Secondly- Although pleased with the bench in general, I have found I use the benches now exclusively in the lower position. Early on when the bench was in the high position, I was doing a lot of standing and leaning over the work … of which my back was not appreciative. After purchasing a rolling mechanics stool, the benches were lowered and now I can sit and do most things quite easily. If I were doing it again, I would forget about the high position all together and make the top extend the base all around the bench.
Posted by John at 8:36 PM