It took far longer to iron out the details of the High-N-Low “Transformer” workbench than expected. If that wasn't bad enough, the opening of the empennage kit has been further delayed due to various issues which also required attention … the ever pleasant time of the year called tax season, assembly and setup of the band saw (unexpectedly needed for the workbench hinge cutouts), “fixing” the new air compressor prior to using it and discovery of the inadequacy of the electrical system at the DOG Aviation assembly facility. While constructing the first workbench, it became painfully clear adequate power was a major issue.  DOG Aviation maintenance got right on the problem and added three more power outlets inside the facility along with replacing a faulty electrical switch. 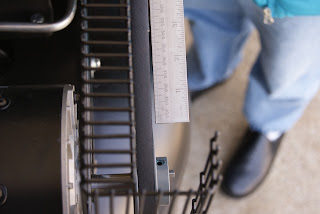 Purchased a Kobalt 30 gallon 110/220 volt air compressor
(made by Sanborn) and while checking it over, I noticed the
belt was not alligned correctly (bad camera angle, it was off
more than it appears in the photo) ... also note the pulley key
protruding from the end of the motor pulley. Great quality
control here! NOT!! The pulley was already a little beyond the
end of the motor shaft as it was, so I had to remove the pulley
and turn it around on the motor's shaft to enable getting the belt in
perfect alignment with the motor pulley fully seated on the shaft.