Yesterday, the power tool bench was assembled and placed on wheels. The bench has a top made from 2 X 6 boards sitting on a 2 X4 frame.  The height is 33 ¾” … so it is the same height as the EAA benches in the high position just in case it is necessary to roll it next to the main assembly workbench. The photo was taken before 4 gusset braces were added.  It is solid and will be used for drilling parts, hammer and vice work, grinder, drill press, band saw and buffing station with a 3M Scotch-Brite wheel. I also plan on additional bracing under the lower shelf boards so they will be able to easily support heavy items. 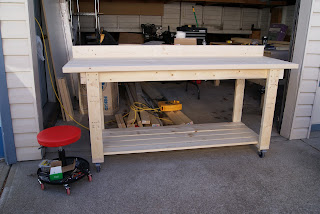 Workbench and power tool station is on locking casters. Note
the rolling mechanics stool ... picked it up at Harbor Freight
and must say it has come in handy building the workbenches.
Thinking it will also prove useful when working on the fuselage,
landing gear wheel pants, tires and brakes, ect. My back votes
$20 well spent.

Also of note: Earlier in the week DOG Aviation's procurement department picked up a chrome shelving unit that is 6' tall X 4' wide and has four adjustable shelves. It can be seen in the back left of the above photo. The threaded levelers were replaced with locking casters so it now rolls as well. My friend Pete had some of these shelving units and they are very handy for storing the many parts and aluminum pieces of the kit. Pete discovered when building his Van's RV-9A that the more things you have on casters the better. Pete had the luxury of building in a three car garage and even with all the extra room he had, when compared to the much smaller DOG Aviation facility, it was necessary to rearrange Pete's work area a few times during his RV-9A build and having everything on casters made that a snap. That knowledge is going to prove beneficial when dealing with the much smaller assembly area here.