Building an airplane should be a joyous and fun experience … right? As more time has been spent in the DOG Aviation assembly facility, it has become painfully obvious I have a case of the “head bangers” blues.  Nope… not a punk rock band or a song, it is an engineering defect that attacks unsuspecting heads leaving one with the head banger black-n-blues.

When initially inspecting the future DOG Aviation facility, the 4 foot wide shelf that spans the width of the rear of the facility appeared to be a great feature. It seemingly promised to offer plenty of (almost) overhead storage for seldom used tools, longer parts and/or a location to keep larger assemblies awaiting final assembly. 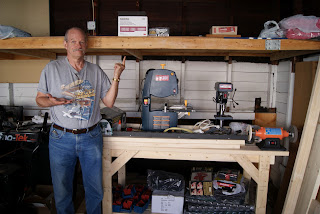 The shelf has a vengeance for unsuspecting heads attached to
individuals such as myself that are not vertically challenged.

Honestly, don’t think I have enough fingers and toes to count the number of times in the last few weeks that shelf has inflicted damage or at the very least tauntingly let me know it was still there.  So from this point on it has been officially declared an “engineering defect” and will be dealt with immediately.
Hate to say it, but there will have to be yet another delay to starting the assembly of the empennage kit … that shelf MUST be raised! No more head banger blues! Hopefully, it will go fast … looks like the shelf can be easily unscrewed from the 2x4 frame and then the frame can be raised higher without to much difficulty. It appears the shelf was assembled using all screws, so should be able to reuse all the components.
Posted by John at 8:50 PM