The decision has been made hold off on assembling the RV-12 wings at this point to prepare the flaperon skins for priming. I was going to wait until later to work on the flaperon spars and skins because the Akzo primer requires temperatures of basically 60 degrees or above and the temperatures are now in the 40’s. However, the paint department is almost out of the Akzo primer so the DOG Aviation research department has been looking at other primer options which will work at lower temperatures and are suitable for the project.

While researching, a visit to the website of a fellow RV-12 builder turned out to be fruitful in that he was using a chromate primer which the manufacturer states can be used in temperatures as low as 40 degrees. The primer comes in quarts, gallons and spray cans.   Perfect … so a call was made to Aircraft Spruce to order a few spray cans of PTI’s zinc chromate primer. Delivery is expected Tuesday and the PTI product will be used to finish off the flaperon spars and skins. If the PTI primer appears to work well, I may use it on the fuselage components since it will be the middle of winter when work begins on it. Hopefully, there will be days like last year when the temperatures pop up into the 40’s so priming can be accomplished successfully.

Work on the six flaperon nose skins began today by first filing the skin edges smooth then using the 1” Scotch-brite wheel to remove the file marks. Fortunately, the edges did not need much edge dressing because the sheer marks were small. 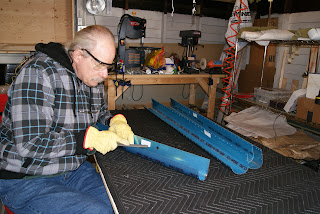 Hand filing the tiny marks left from the sheering process at the factory. 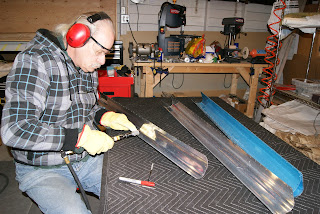 Smoothing the edges on one of the flaperon nose skins with a 1” Scotch-brite wheel.

After all six of the flaperon nose skins were smooth, the rivet holes along the outer edges of the skins that will meet with  the flaperon’s spar were dimpled for flush rivets. 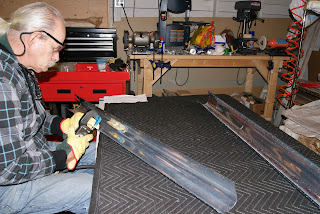 Impulse Purchase … while picking up some cargo straps at Harbor Freight noticed there was a service cart on sale. Because of the marathon wing skin dimpling sessions, have forgotten to mention how useful the service cart has been. It is a great addition to the shop and has proven very useful … wish I had purchased one long ago. The single large drawer holds all the specialty tools and the bottom shelf has plenty of room for all the air tools and larger items.  The top shelf is nice to keep those tools and small parts currently in use at arms reach. 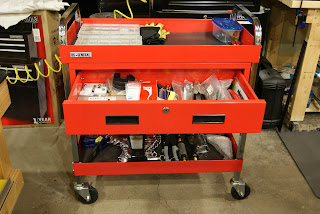 The service cart from Harbor Freight is proving to be a wise investment. It is actually sturdy,
has a good sized drawer which opens and closes nicely, rolls easily and the two front wheels lock.