Having taken a couple of days away from the shop, it was good to get back to work on the RV-12. All the prep work is finished on the wing’s ribs and they are ready to be riveted onto the spars to form the wing skeletons.

However, after days and days and days of rain and cold weather the forecast for the weekend suggests we may have a significant bump in our temperatures well into the range required for the Akzo primer to cure properly. I feel it would be prudent to take advantage of what will likely be the last couple of 60 degree days of the year and try priming all the wing skins if possible.

Because each wing skin needs dimpled prior to priming, the push is on to complete all the necessary dimpling as quickly as possible. Guess I will need another marathon session or two. Today was spent sorting through the remaining wing components and placing them into piles of left and right wing parts followed by deciphering the drawings to determine which side of the skins and miscellaneous parts will require dimpling. Because the left spar is already out of the box and ready for assembly, the plan is to dimple all of the left wing’s components first before moving on to the right skins. I was able to get one large skin deburred and dimpled today plus a hand full of smaller parts. 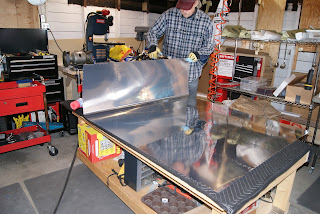 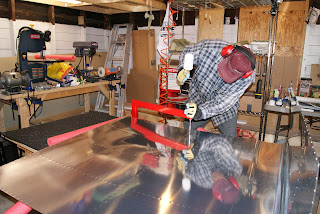 Using the C-frame to dimple the left wing’s bottom outboard skin for flush rivets.
Due to the size of the skin, the C-frame could not reach the center row of holes, so quite a few holes had to be hand dimpled using the custom 120 degree dies that have holes drilled in them so they can be used with a nail and the hand rivet puller. Because the lower skins wrap around the leading edge of the wing, all the lower skins have a pre-formed bend in them. In order to dimple the portion that wraps around the wing's leading edge using the C-frame, I decided to suspend the skin from the rafters. 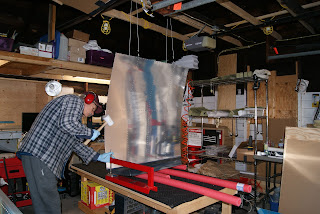 Left wing’s outboard skin suspended so the portion that wraps around the leading
edge could be dimpled with the C-frame without stressing the leading edge bend.
While the wing skin was suspended, it was quite easy to use the custom 120 degree dimple dies to dimple the center row of holes the C-frame could not reach.  Now that I have a system which seems to be working well, I’m hoping I will be able to move through all the remaining skins before Saturday afternoon. The left skins should be completed just not sure if there will be enough time to complete the right skins in time to prime while the temps cooperate.