Work On The RV-12’s Fuselage Begins

It has been a couple of weeks since the last post … due in part to taking a few days away from the project after the fuselage inventory was completed, coupled with waiting for tools and materials as well as with dealing with a yet to be resolved interior/exterior color theme.

Just before the fuselage kit arrived, I attended an EAA pancake breakfast at the airport I had hoped would become home base for final construction and phase one flight testing of the RV-12 … only to find out the likelihood of finding a hanger (or shared hanger space) is practically zilch.  The possibility still exists for using the EAA’s facility for assembly, but after assembly there is apparently no place there to shelter the aircraft. So being just a little depressed about the situation, decided to take a few days away from the project after the inventory was completed. 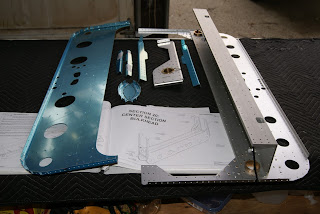 Components making up the RV-12’s center section.
After studying the plans and looking more closely at finished RV-12 aircraft, it became very apparent there were a few issues which created an instant dilemma, beginning with the first piece of the fuselage puzzle … the F-1204 center section as seen in the above photo.
Primer & interior paint … basically, the shop only had a very small quantity of the Akzo epoxy primer remaining. Unfortunately, Akzo can only be purchased in 2 gallon batches (1 gal epoxy, 1 gal catalyst). I had not ordered more earlier because the under the floor pan components would only require at most a pint of primer (if that), so research was being done on finding another primer that would work well with interior paint. Ultimately, this proved to be a waste of time because builders have reported on the forums of good success using the Akzo primer with Sherwin-Williams Jet Flex water reducible (which is an interior paint made to Boeing specifications) as long as the Akzo is top coated in 24-48 hours. I really like Akzo primer so one problem solved … another batch of Akzo was ordered (there will still be a lot left over perhaps to pass onto another builder). Jet Flex interior paint is available in solvent based (which is NOT Isocyanate free (think Bhopal India disaster) and requires a fresh air respirator) and water reducible which can be sprayed using a good organic vapor filter on a respirator …  so I’m inclined to give the Jet Flex water reducible a try based on other builders good experiences with the paint.
Knowing the Akzo primer must be top coated within 24-48 hours opens up another can of worms … what color will the exterior of the airplane be? Should the interior paint color tie into the exterior color scheme? What is the exterior color scheme? Oh … what about interior upholstery appointments and seat belt color choices? Was hopeful all these decisions could be dealt with later by kicking the can further down the road for the time being (much the same as Congress does) … but as it turns out, the RV-12’s center channel assembly is visible and will require primer and interior paint.
Some builders spray the fuselage interior after assembly (but it is hard to get the paint evenly into all the nooks and crannies) and some prior to assembly. Some builders who have painted the fuselage interior after assembly have said, if done again, they would probably paint prior to assembling the parts. I’m inclined to paint prior to assembly because none of the rivets are set with a rivet gun which will mar paint. Unfortunately, parts are riveted onto the F-1204 center channel in the very first step of the plans, so a command decision is required … and soon. DOG Aviation has already received a few color chips with more on the way, along with interior samples as well.
Although not doing any assembly yet, forward progress on the fuselage has begun. The aft portion of the RV-12’s F-1204 center channel required being match drilled to the holes in the F-1204D center section aft bulkhead. Clecos are used to secure the center section and aft bulkhead onto the bottom skin for horizontal alignment and clamps are used to snug the two parts together for drilling. The match drilling consists of drilling 73 holes and after drilling, two of those holes are enlarged with a #11 drill bit. The center channel is 5/16” thick and is on a slight angle so the DOG Aviation procurement department purchased a drill guide to aid in drilling straight holes. 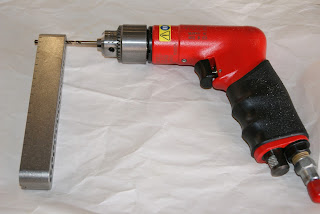 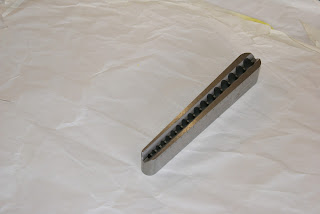 Drill guide viewed from the bottom. The V on the bottom allows the drill guide to center a hole in round tubing as well.
Because the center channel material is so thick, if the holes are not perfectly square, the heads of the solid rivets going into the holes will not set perfectly flat. Sure a piece of hard wood with a hole in it would work, but did not have any lying around the shop and a thick chunk of it costs almost as much as a drill guide. 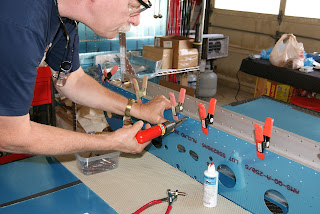 Using the drill guide to match drill the first of 73 center section holes
in the aft bulkhead … starting in the center and working out. 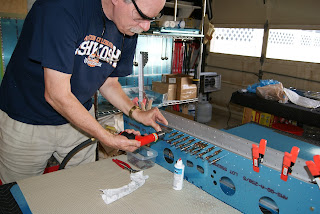 Making progress slow but sure … lots of holes still left to drill using the drill guide. 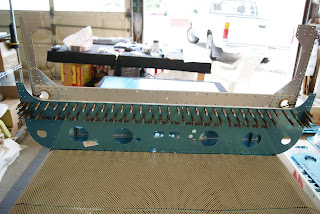 Completed match drilling of the F-1204 center channel to holes in F-1204D
aft bulkhead - all 73 holes completed, plus two holes enlarged to #11.
After the holes were drilled in the center section, the components are disassembled for deburring. Deburring the outer portion of the center channel was a snap using the Avery deburring tool. However, that tool is too long for use inside of the center channel. At first the bit was unscrewed and spun by hand (as done before) but doing 73 holes this way … my fingers were getting sore just thinking about it! There had to be a better way. After a little brainstorming, hit upon an idea that proved to work great! The angle drill is a seldom used tool in the drawer and appeared to have the same thread size as the deburring tool bit. So simply screwed the deburring bit in and went to work easily deburring all the remaining holes in the center channel. It is always satisfying to successfully repurpose a seldom used tool with great results. 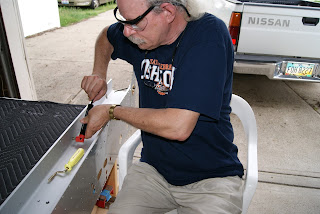 Using the angle drill to deburr the holes inside the center channel.
Admittedly, color choices and interior decorating is not my forte. So while struggling with those issues, work will continue on fuselage items that will need to be done eventually anyway, such as separating parts on the band saw, filing, deburring, smoothing edges, etc. Some parts such as the ribs under the seat and floor pans could also be primed at this time since they will not receive a top coat of interior paint.
Posted by John at 10:33 AM