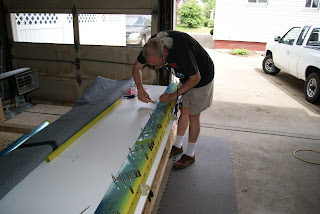 Securing the A-1202A skin onto the right flaperon’s skeleton with Clecos. 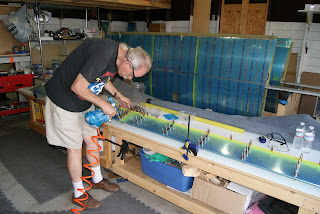 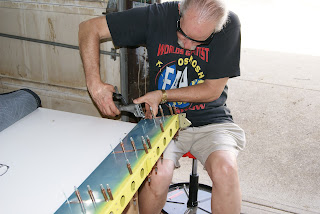 As with the left flaperon, the hand rivet puller was used to set the aft most row of bottom
rivets which sit high at first because they touch the set rivet on the opposite side. 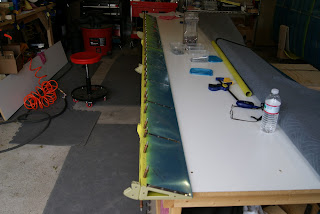 Right flaperon’s aft skins riveted onto the A-1205 ribs with flush rivets. 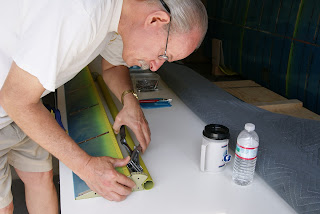 Riveting the counterbalance tube onto the right skeleton’s outboard nose ribs with a LP4-3 pop rivets. 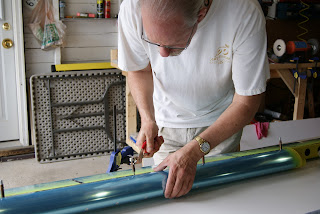 Placing Clecos into the A-1201C nose skin to secure it onto the right flaperon’s skeleton. 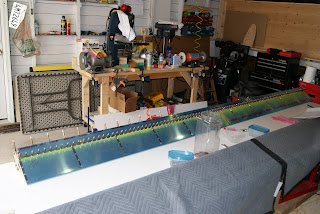 All three nose skins attached to the right flaperon skeleton with Clecos and ready for riveting. 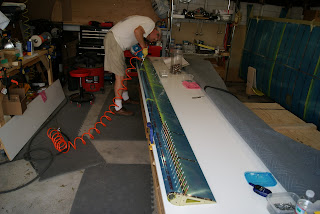 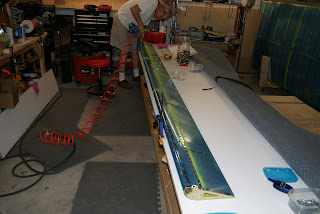 Setting the last flush rivet in the right flaperon with the pneumatic rivet puller.
After completing the riveting of the skins, the last thing the instructions call for is to install two pivot bearings on each flaperon using Loctite 243 on the first third of the threads. The plans instruct the builder to screw the pivot bearings into the pivot brackets until the center of the bearing hole is 11/32" above the flaperon skin. Because the bearing wants to flop around, measuring can be tough … one tip on the forums was to place a long AN3 bolt (which is 3/16” diameter) through the bearing and then measure ¼" from the bottom of the bolt to the flaperon skin … which would be the 11/32" minus 3/32" (half the thickness of the bolt) or ¼".
That procedure was utilized and improved upon by cutting two small pieces of ¼" OD tubing to use as a visual reference. The pivot bearing was screwed in until the bolt touched both pieces of tubing evenly. Then a square was used to true up the bearing. 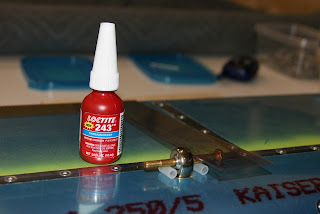 Using two pieces of ¼" OD tubing and a long AN3 bolt to achieve a
clearance of 11/32" from center of the pivot bearing to the flaperon skin. 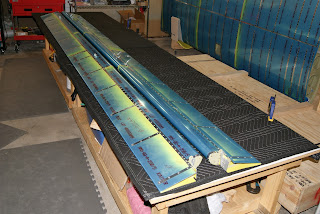