In an effort to make some progress while the color choice for the interior paint is being finalized, work began on prepping the F-1215 fuselage ribs.  Prior to deburring, the F-1215 ribs required cutting and removing a metal strip that bridged one of the openings on the ribs. A cutting wheel could have been used … but the shop has a metal nibbling tool which has seen very little use since it was purchased in the 70’s, so thought this would be the perfect tool for cutting the metal strap. 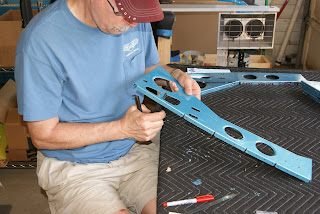 Using a nibbling tool to cut away the metal strap bridging the opening in one of the F-1215 fuselage ribs. 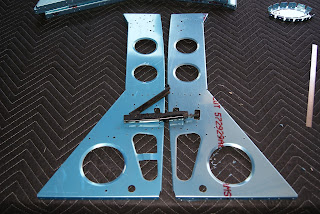 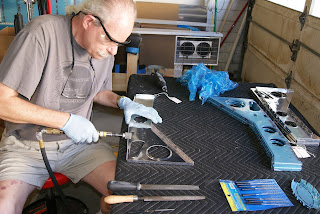 Using the 1” Scotch-Brite wheel to smooth the edges of a W-1215 fuselage rib.
Next up are the baggage compartment ribs which hopefully will get done tomorrow.
Posted by John at 8:39 PM