Today work began on modifying the F-1207F corrugated baggage bulkhead cover. There are a few ways to go about this, but felt it best to first mark the cut lines on both sides of the F-1207F cover and drill all the necessary holes first, then make the horizontal and vertical cuts last … this should insure all the pieces fit together nicely when finished.  Because of the size of the F-1207F baggage bulkhead cover the band saw can only be used for the vertical cut. The small 45 degree transition between the vertical and horizontal cuts will require a small cutting wheel on the Dremel and the horizontal cut will be done either by hand or using a jig saw … still thinking about that.

Before drilling the newly fabricated vertical angle the part was painstakingly marked, checked and rechecked. Four lines were drawn down the length of the angle … two lines for the two rows of rivets that are slightly offset from one another, a line to mark where the dimpled holes will be for the #8 screws and a fourth line to denote where the cut line will be so the angle can be properly positioned over the cut line on the F-1207F baggage bulkhead cover prior to drilling. Once all the lines were drawn, the rivet and screw holes were marked, center punched and small lead holes were drilled then enlarged to #30. 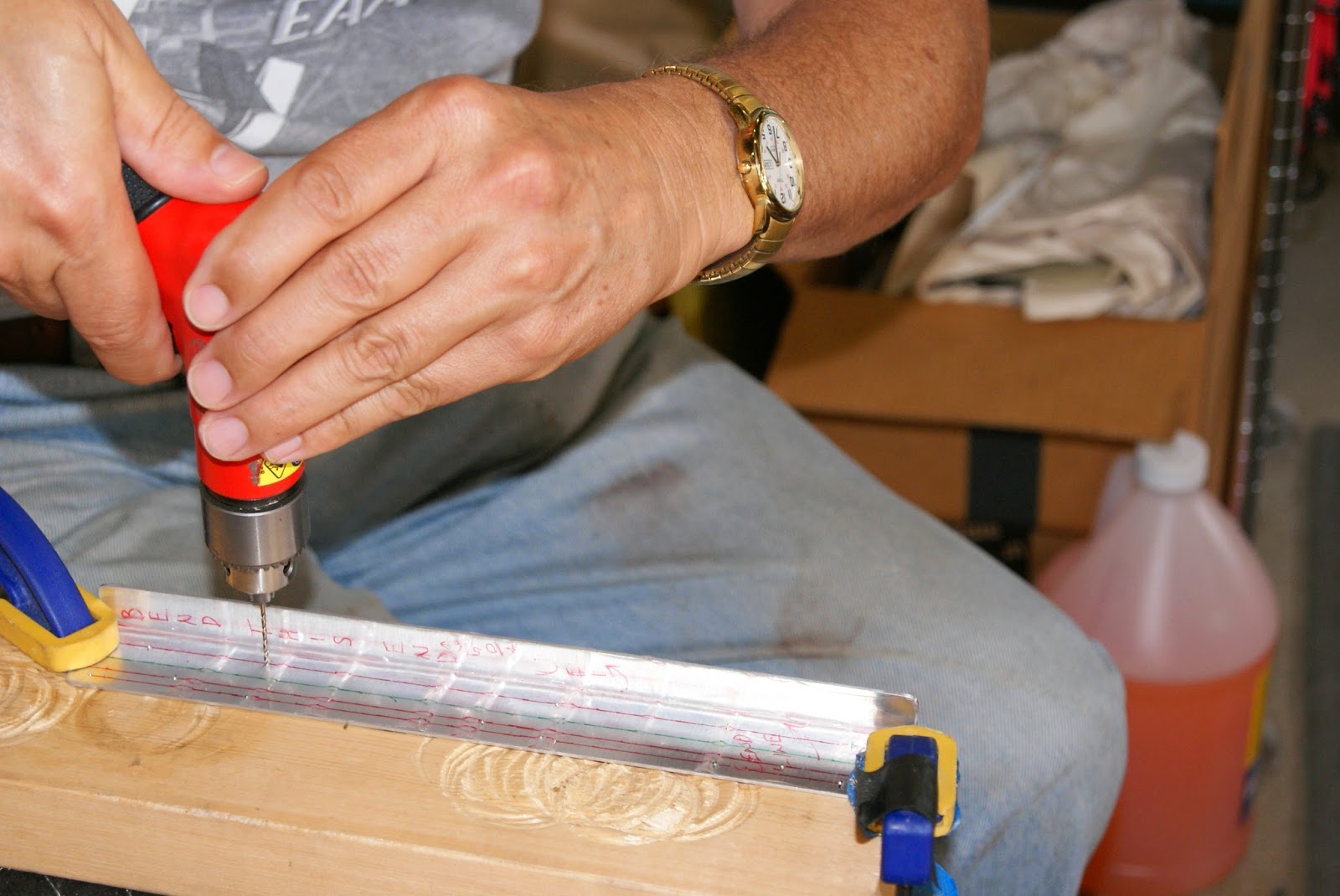 Drilling lead holes in the newly created angle for the F-1207F’s vertical cut necessary for the modification. Zooming in on the photo one can see three red lines used to place rivet and screw holes correctly and a green line which denotes where the cut line will be. The green line will offer a visual aid for positioning the angle over the cut line marked on the F-1207F baggage cover… then the parts can be match drilled to each other.

The vertical cut will be made 8 ¼" in from the passenger side of the F-1207F baggage bulkhead. The horizontal cut will be made along the peak of the third corrugation up from the bottom. A 45 degree transition will be incorporated between the vertical and horizontal cuts.  As with the previously completed baggage floor, a small offset will be necessary around the existing screw hole on the bottom of the cover. The third photo below shows the issue clearly … the vertical cut line almost catches the edge of the bottom screw hole. As with the baggage floor, a small offset will be made to the right side of the aircraft. 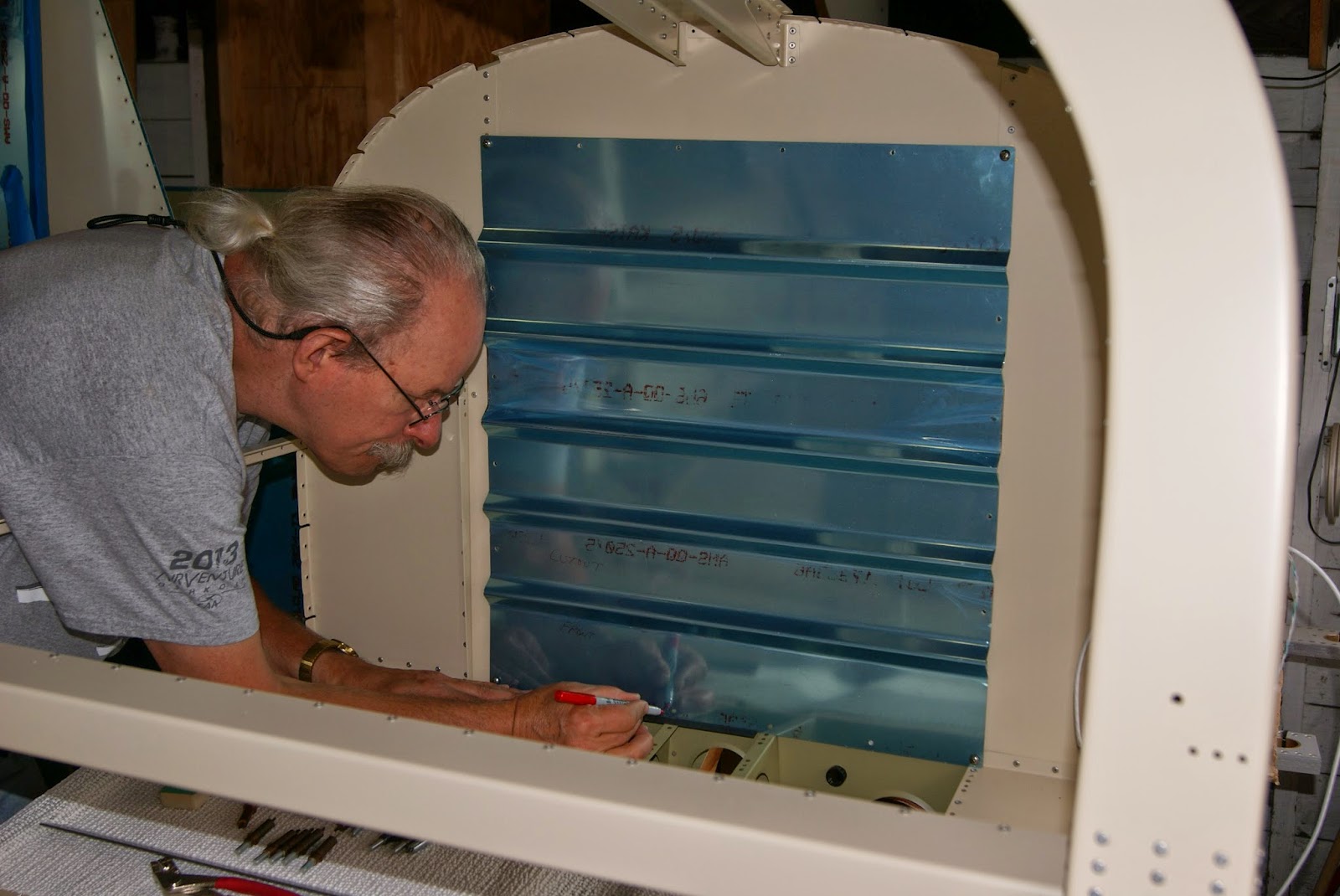 Marking the location where the vertical cut in the F-1207F will begin. 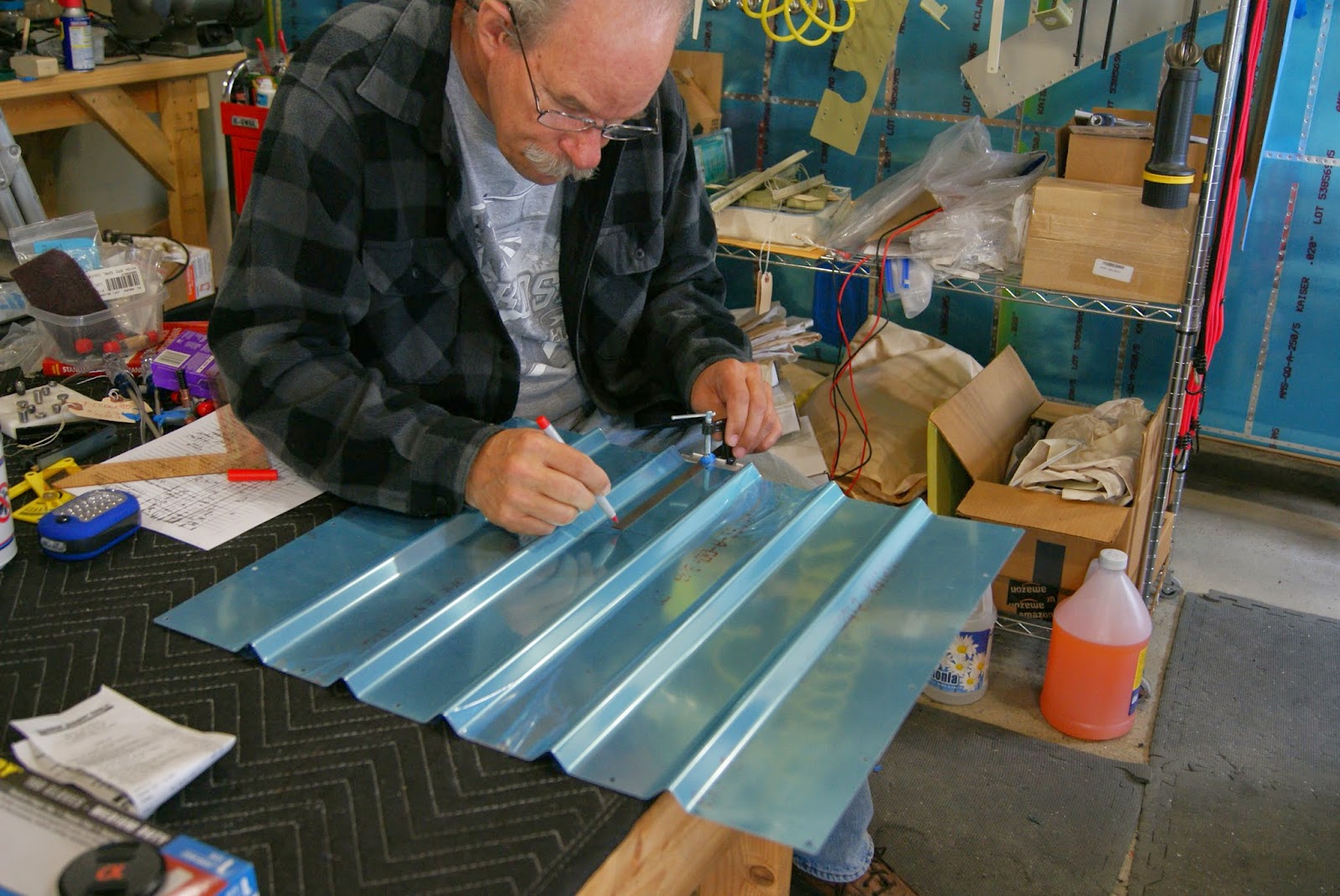 Laying out the cut lines on the F-1207F baggage bulkhead cover. The vertical cut (red line) will be made 8 ¼" in from the passenger side of the bulkhead. The necessity for the yet to be drawn offset can be clearly seen where the cut line meets the base of the F-1207F.

After taking a lot of time to measure & check … measure & check, seemingly ad infinitum, the angle for the modification was match drilled into the F-1207F baggage bulkhead cover. The #40 holes drilled and Clecoed first, then the holes were enlarged to #30 and the nutplate screw holes were drilled to #19 for a later dimpling for #8 flush screws. 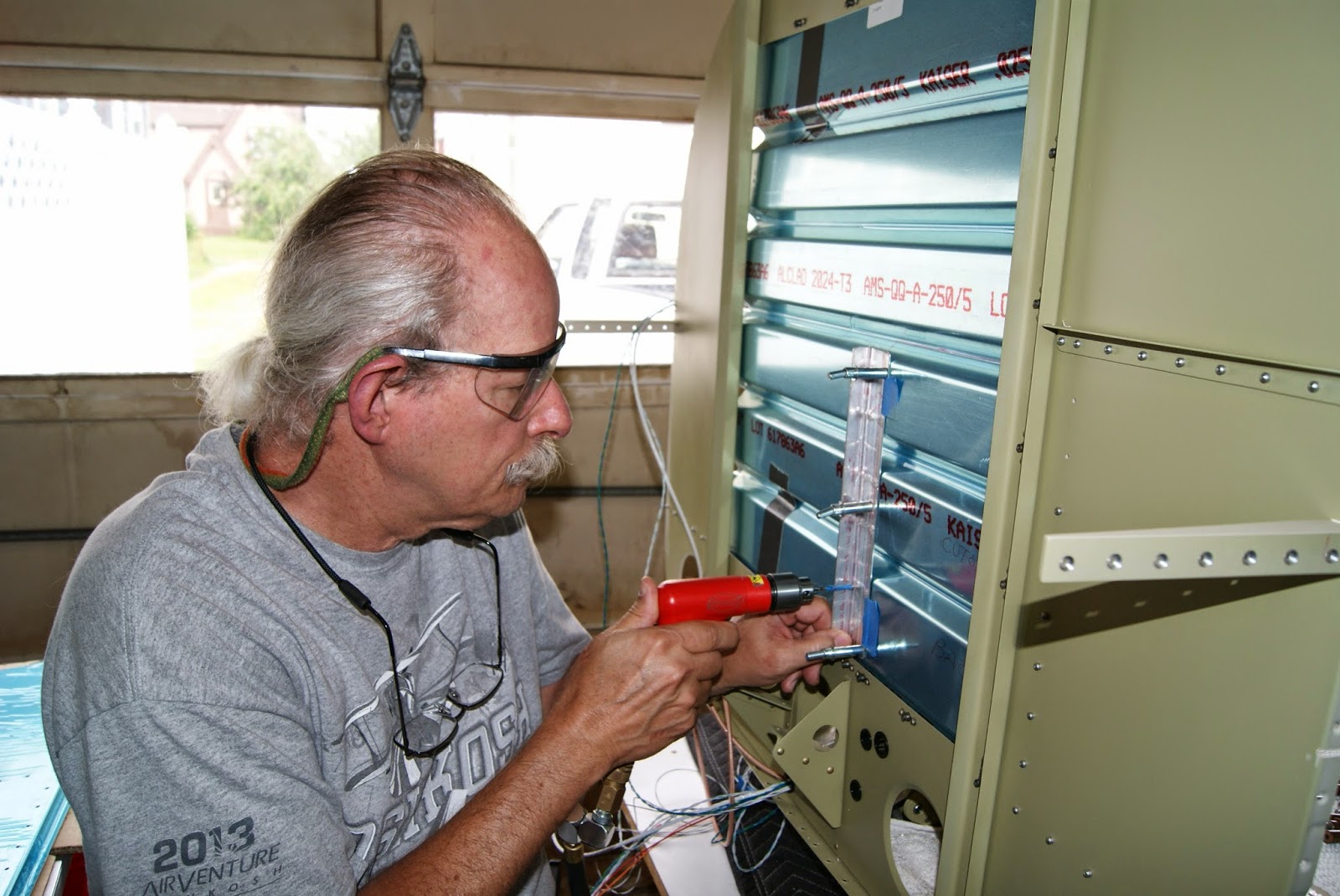 Match drilling the holes in the new angle into the F-1207F baggage bulkhead cover.

I was hoping to get to cutting the F-1207F cover today but there were “honey do’s” and company at one point, so lost quite a bit of shop time … plus, I was working at a snail’s pace trying to be very careful and get it right the first time.
Posted by John at 10:21 PM