As mentioned last week ,Van’s has finally begun shipping the long awaited for ADAHRS stiffener modification. The modification was developed because some builders were getting some jittery screens on the SkyView and in particular the “ball” on the slip indicator. The issue was isolated to the tail cone skin being quite flexible in the area of the mounting brackets for the ADAHRS unit. Apparently, prop wash is causing that area to flex and vibrate a bit … which is affecting the quite sensitive magnetometer within the ADAHRS unit. The Van’s fix is to add a small stiffener bulkhead just forward of the ADAHRS mounting brackets to remove the flexing of the tail cone’s skin in that area.

The part number for the kit is 12SVAHRS Rib Kit. The kit consists of one F-00062 stiffener bulkhead, 13 rivets, and an instruction sheet to go into the construction manual. 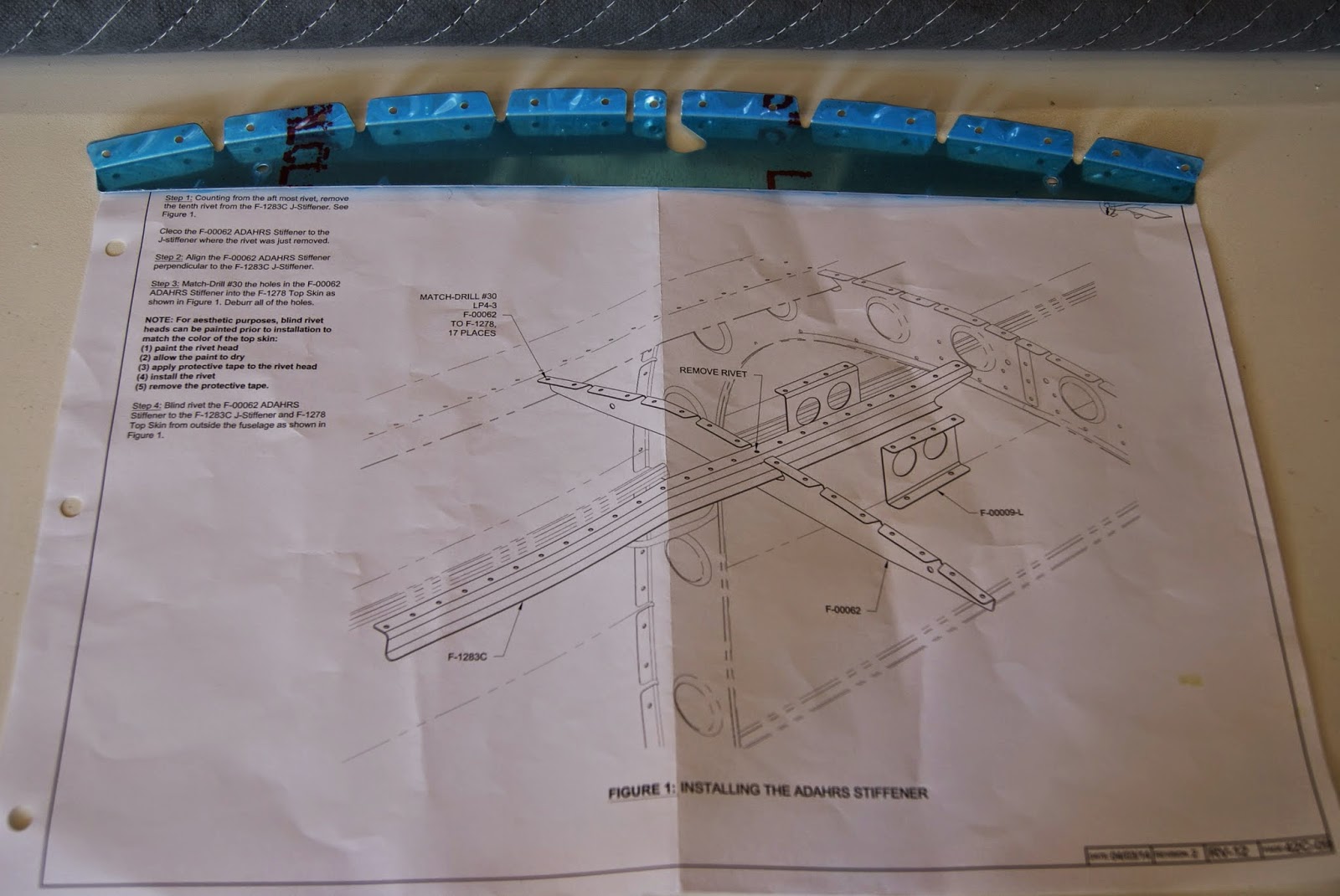 ADAHRS stiffener kit - basically it is only one stiffener bulkhead which is riveted onto the top skin on the tail cone.

I asked Mike to come over and give me a hand which made things easier. Because the stiffener is quite flexible, I clamped a piece of 90 degree bent aluminum behind the web of the stiffener to keep it straight. After the center Cleco was installed a measurement was made from the center of the stiffener to the forward edge of the tail cone skin. With Mike’s help taking measurements, we worked out from the center keeping the rib in position while match drilling the rivet holes in the rib into the tail cone’s upper skin. 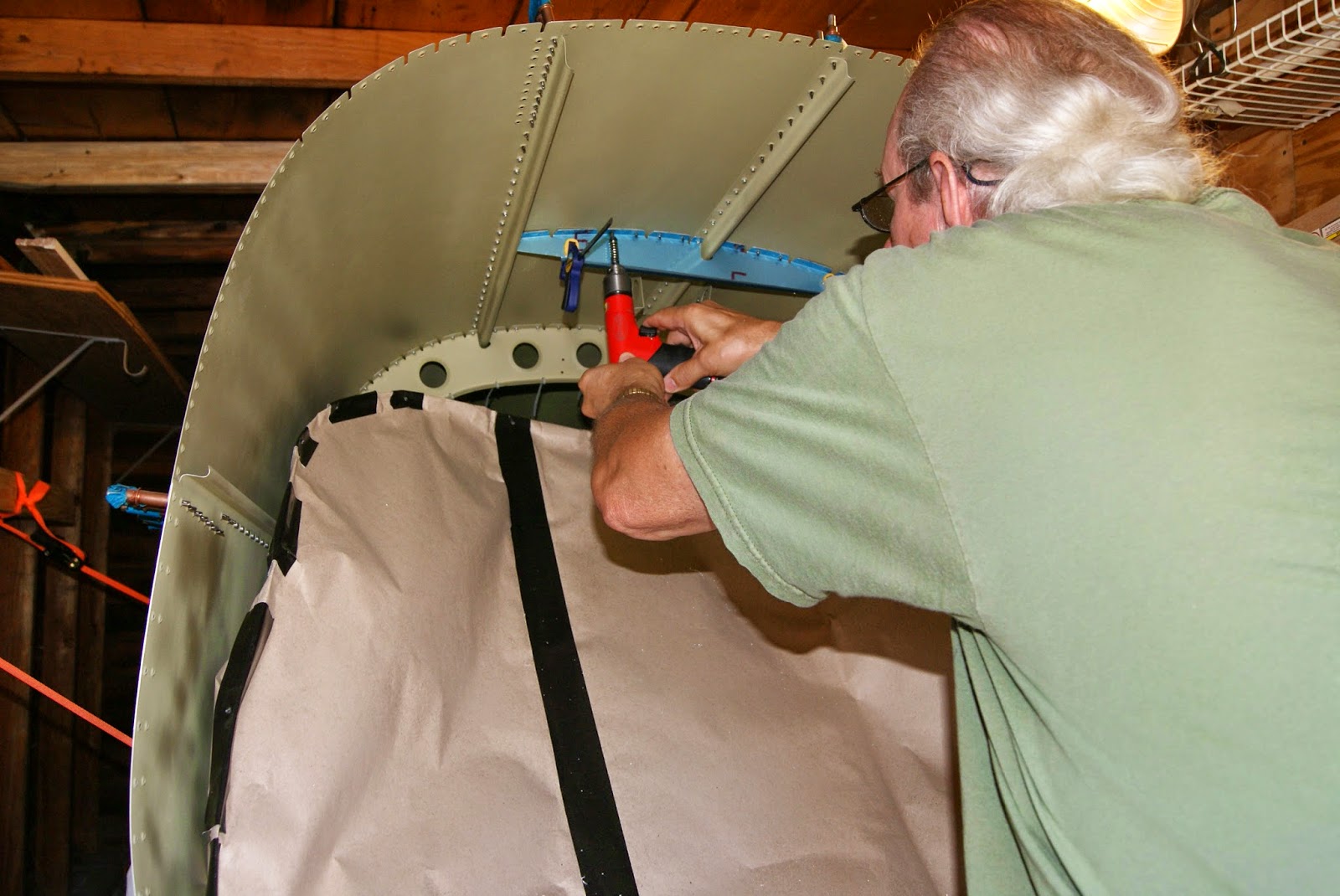 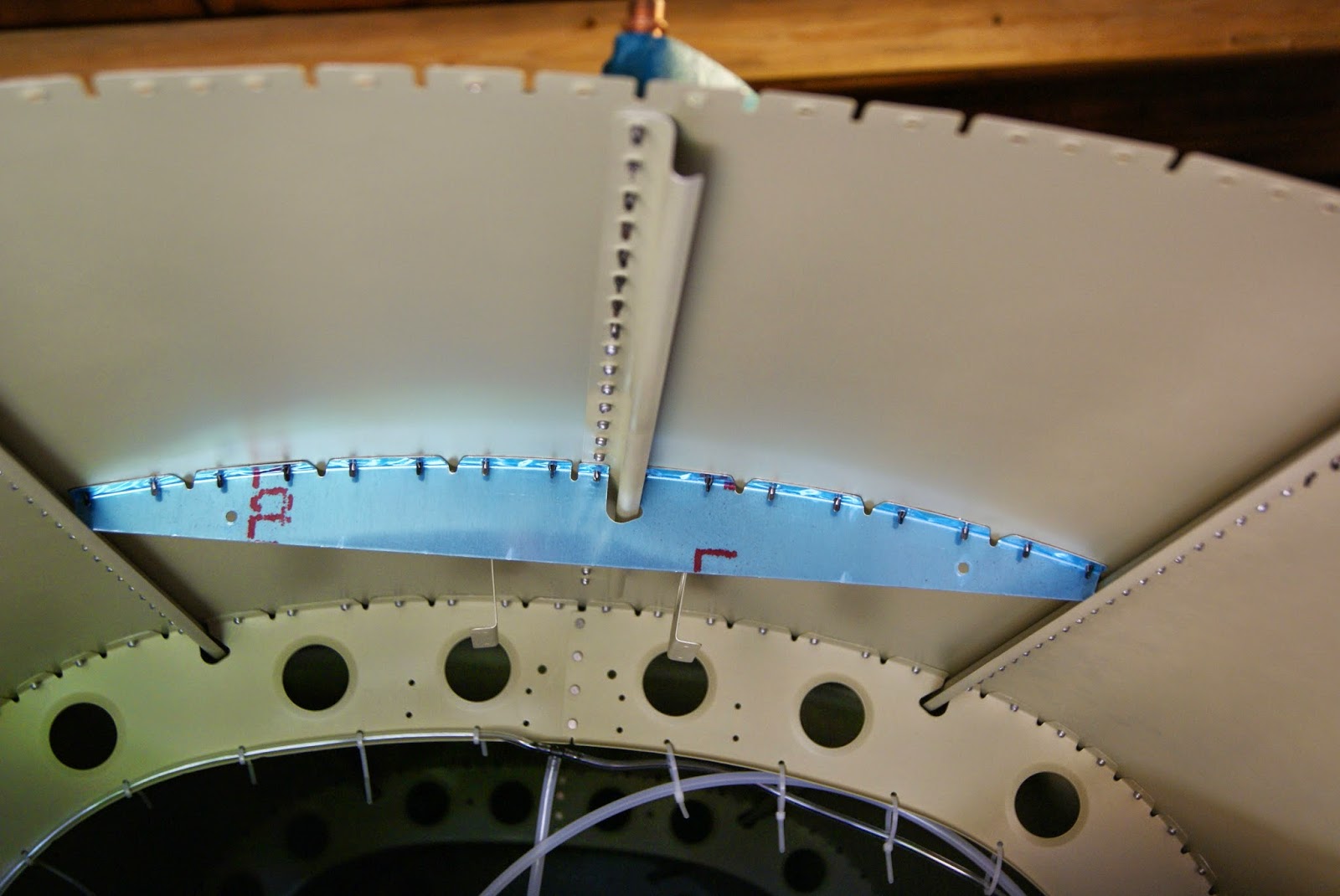 The F-00062 drilled and secured in position with Clecos. For what it is worth, the stiffener removed all flex in the area of the ADAHRS mounting brackets … so it looks like job well done Van’s. 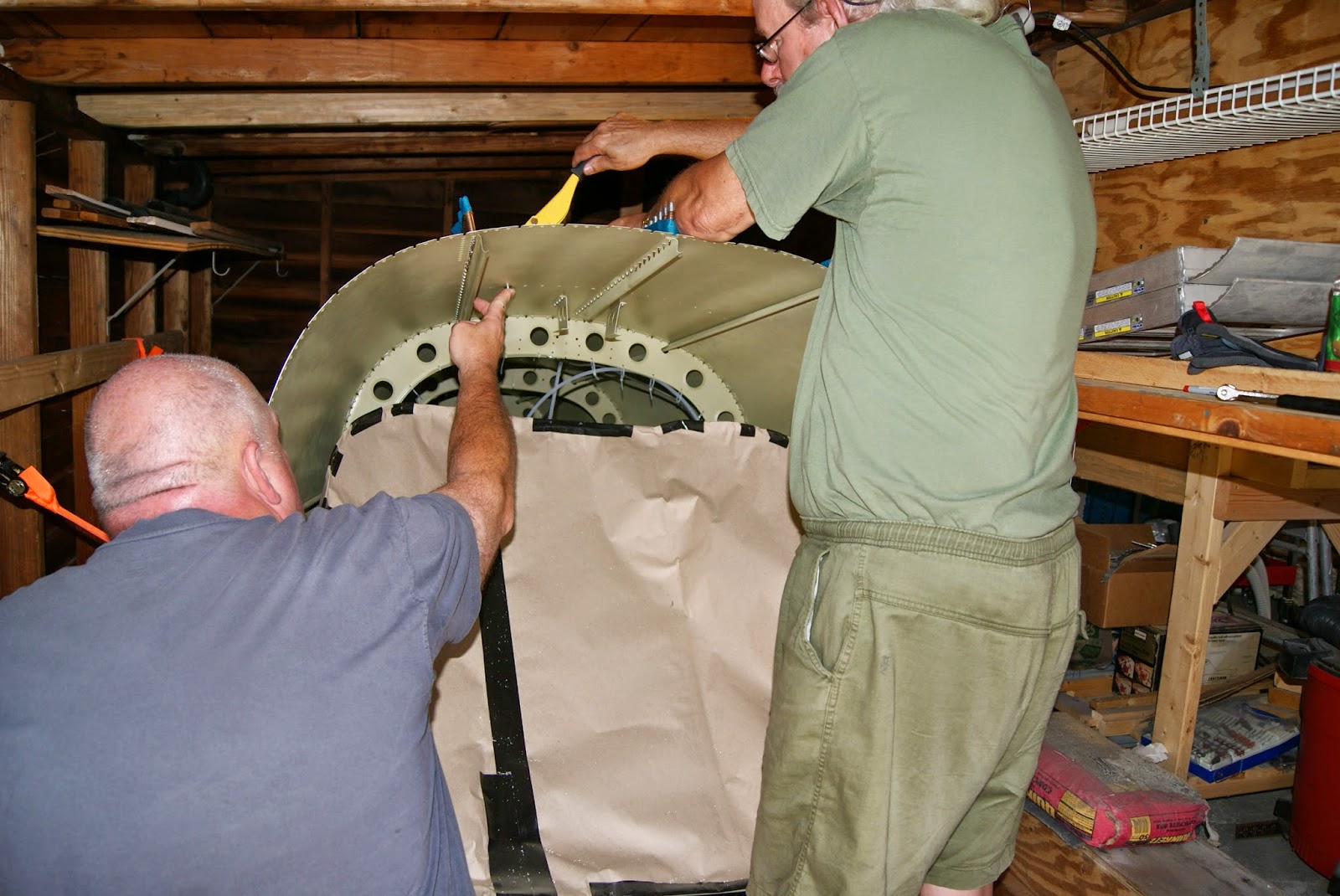 Mike holding the nail and female die in position as I pull on the nail with a hand rivet puller which compress the male die into the female die to create the dimple. 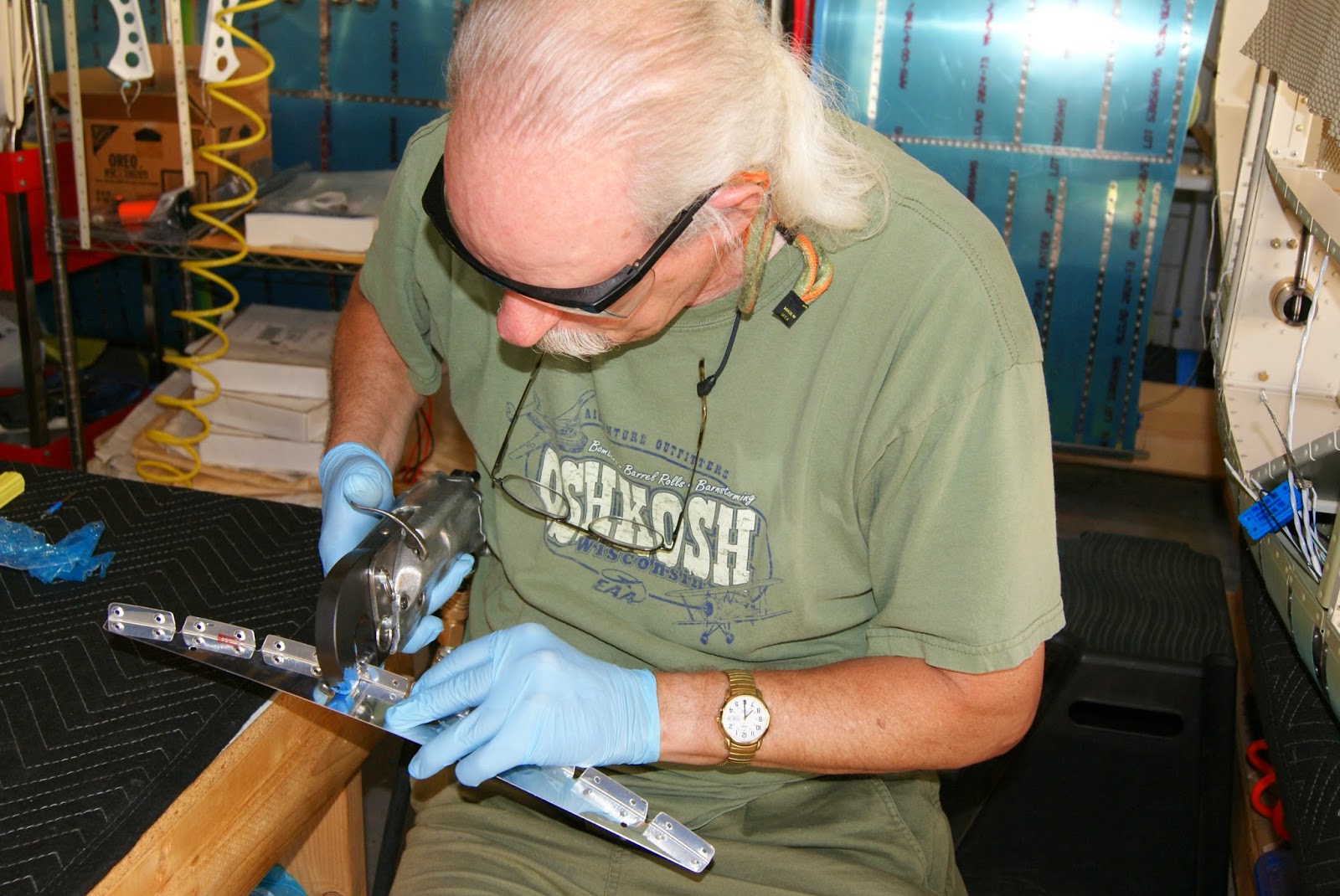 Now that the rivet holes in the flanges of the ADAHRS stiffener are dimpled, the stiffener is ready to be included in the upcoming primer session and will get added to the pile of parts. The last few days have been spent deburring the pile of parts that were retrieved from the hangar. All the parts are deburred now, but a few require some dimples where nut plates will attach … so will try to do get all that out of the way prior to priming.
Posted by John at 10:03 PM