Although not having posted in a while, have made some small progress on the DOG Aviation RV-12 … however the nature of most of the work was not worthy of generating any posts.

One issue that needed resolved was the finish on the firewall forward parts that were sprayed with VHT high temperature paint. Originally I was planning to powder coat these parts … then figured I could get by using high temperature paint. Frequent readers of the Blog may recall during the summer I painted a bunch of parts and was not happy with the result so sanded them down and re-sprayed them recently.  The second spraying turned out much better than the first but there was still an issue with the way the paint dried resulting in a really rough finish. Decided to throw in the towel and just powder coat the parts. Unfortunately, I forgot to take photos of the bad finish to share with others.

Mike has a friend that owns a powder coating business so we boxed up the pieces and went to seek professional help. I was told all the paint and primer would have to be blasted off the parts and that I could use his bead blasting chamber to clean up the parts … which took all of an afternoon to accomplish. (As a side note, there was a customer there who was a professional painter and he said he has seen paint that had become frozen outgas like mine did. I know the VHT paint did not become frozen on my watch, so it was either frozen during shipping to the auto parts store or it reacted to the Akzo primer ... the latter most likely the main issue).  I can tell you the VHT paint blasted off the parts in moments … however getting all the Akzo primer off the parts required a lot of work … Akzo primer really grips well.

Prior to attaching the tail cone to the fuselage, have decided to install some of the flight controls so I can install the roll autopilot servo prior while access is good. The instillation of the flight controls begins with installing the WD-1212 control sticks. Prior to installing the control sticks there is a brass bushing that gets inserted into the pivot point on the control stick that needs to be drilled out to 1/4". The hole in the bushing is just slightly under sized, so not much material is removed by the drill bit. 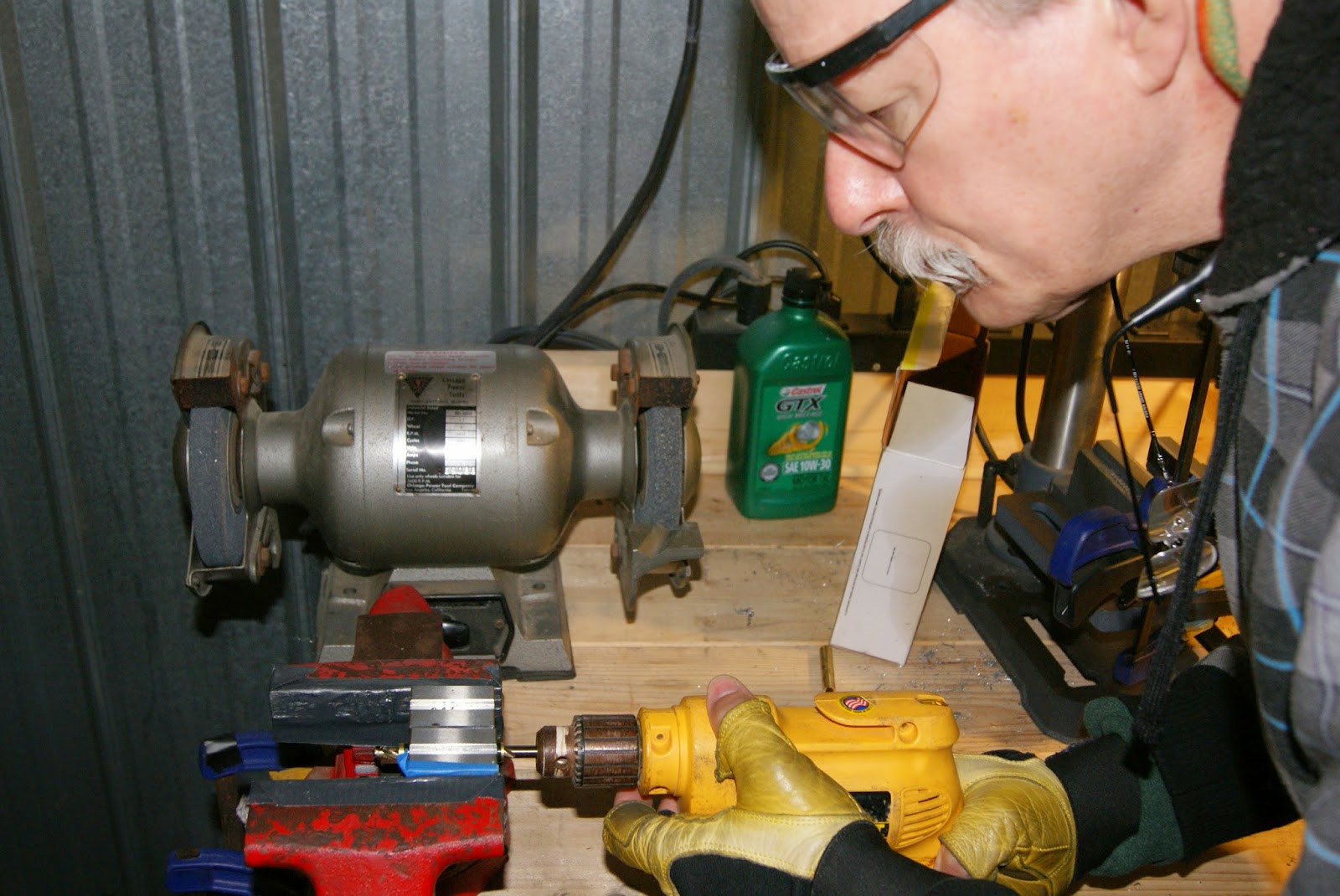 A control stick bushing clamped in the vice between two V blocks being drilled out to 1/4".

The plans instruct the builder to file down the pivot point tube on WD-1212 control stick so the previously drilled brass bushing sticks out just past the control stick on both sides. Van’s does not give an exact measurement here so I used the digital caliper. The bushings measured 2” so I filed the control stick down to .025" smaller. This will give about .012" clearance on each end … perhaps a little less as the bushing sinks into the powder coating on the control column so it should be a good starting point.
Return from the future: filing down the control stick to .025" smaller than the bushing may have been a little too aggressive. So if doing it again, would suggest starting at .008" smaller. See the next newest posting for more details. 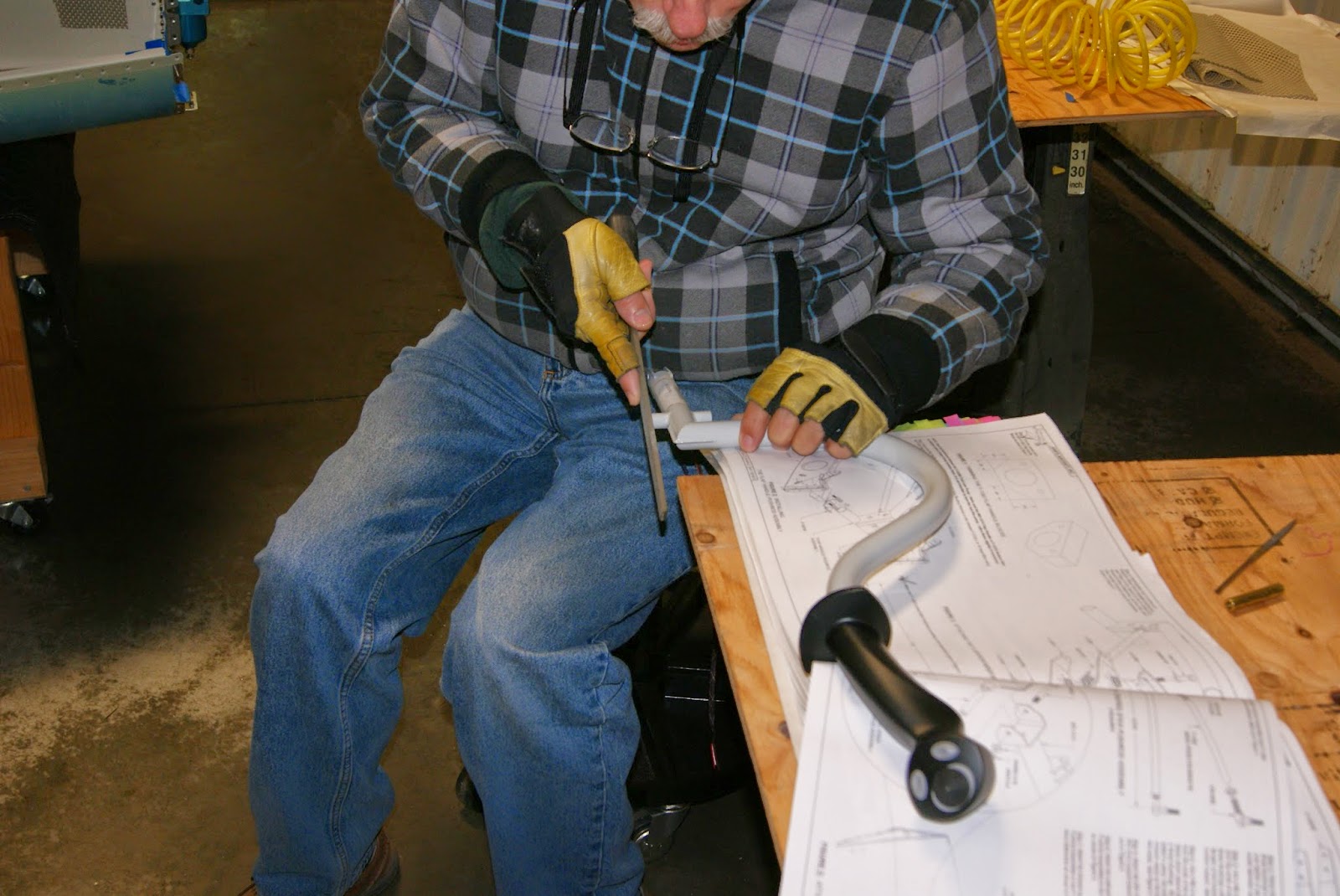 Filing the pivot point on the WD-1212 control stick so the brass bushing will protrude by .025" further. 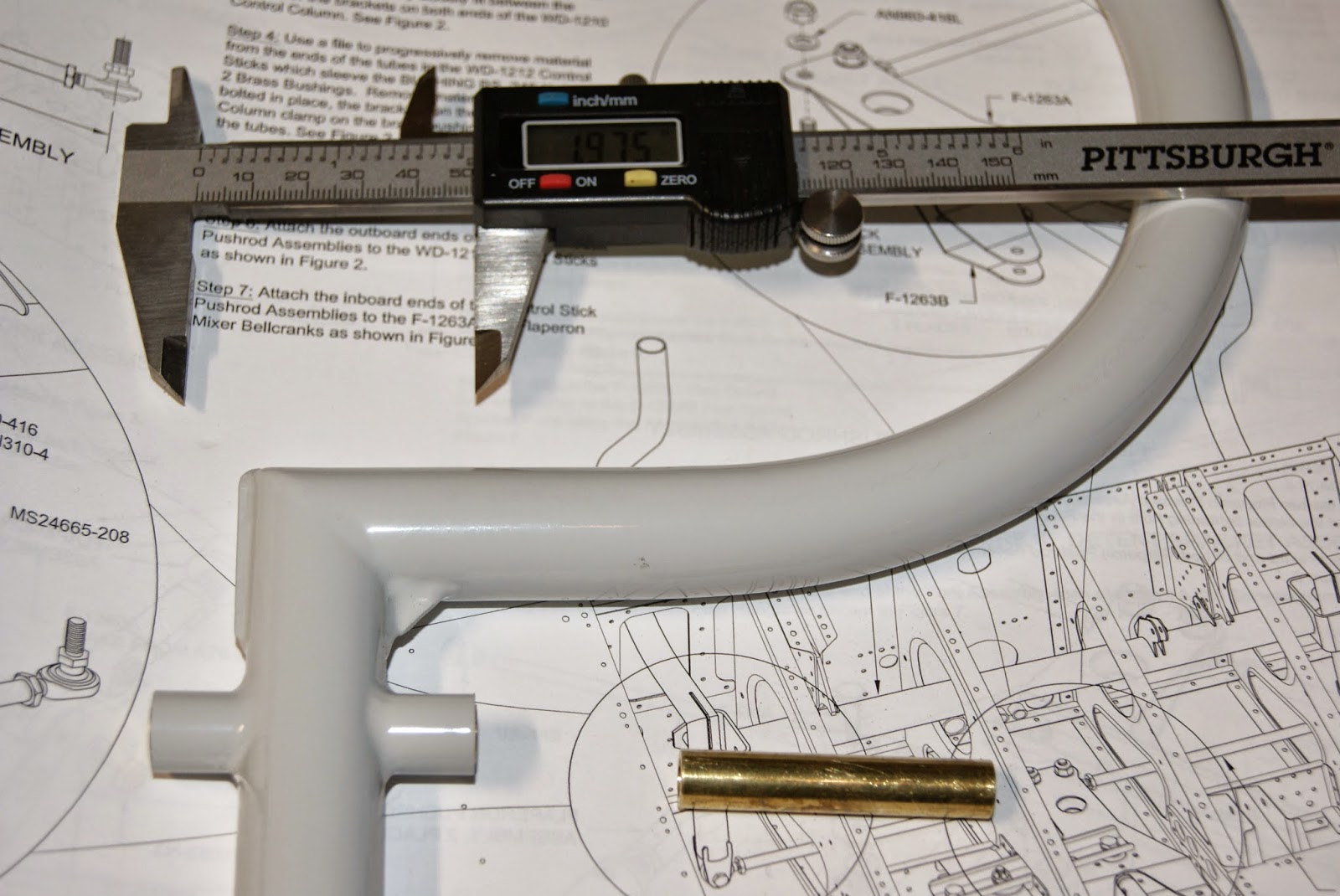 Looking closely, notice the brass bushing that is inside the WD-1212 control stick’s mounting tube protrudes slightly on either side. Looking at the digital caliper, one can see the tube has been filed down to .025" less than the 2" brass bushing. 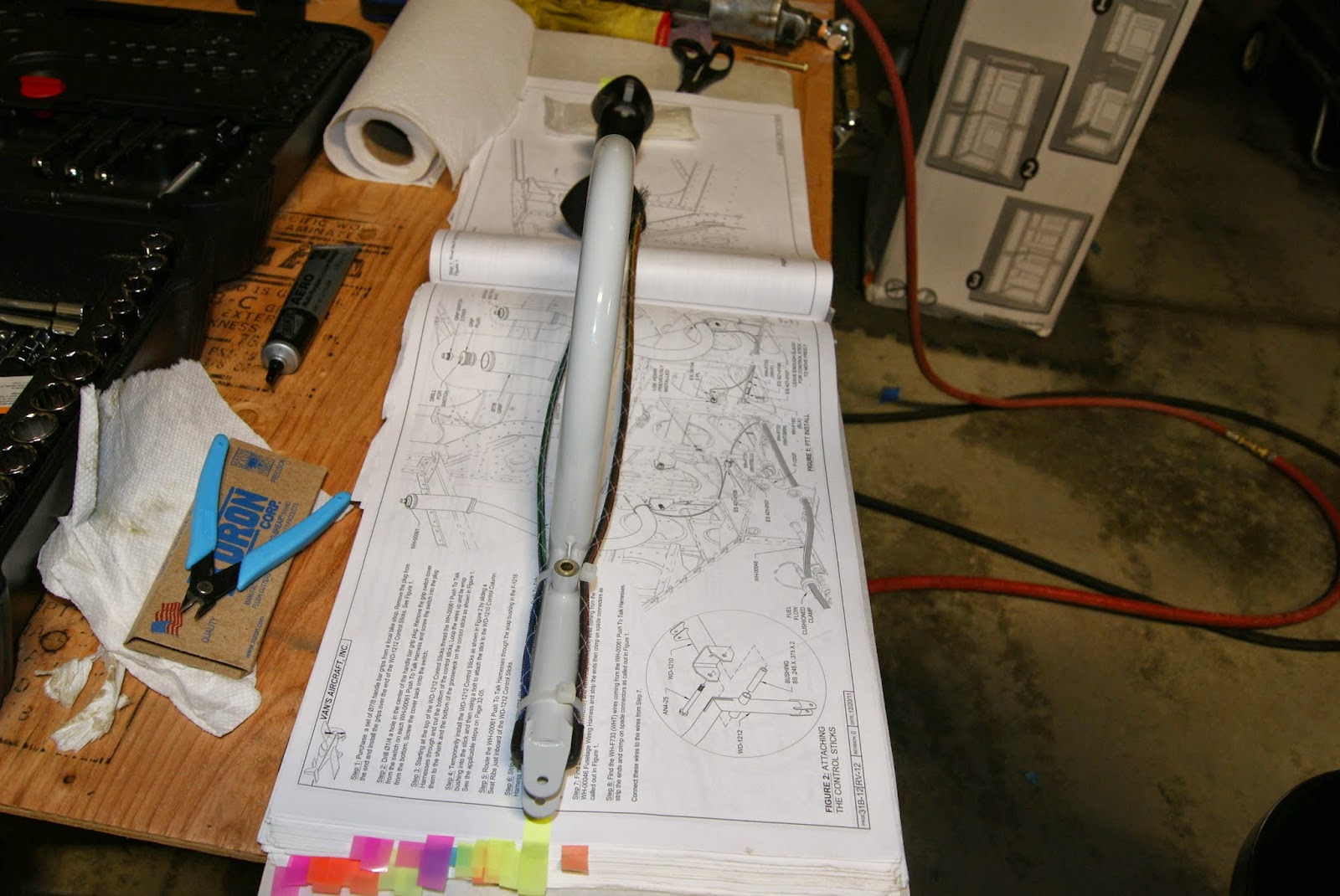 Prior to mounting the WD-1212 control stick, the wires were covered with heat shrink at the point of the 180 degree bend and then wire tied in place.

Based on a suggestion from Joe (a builder in ) the plan is to attach the fabricated F-1264 pushrod assembly onto the control stick prior to installing it. This makes perfect sense to me because there are two tiny spacers to install … installing the push rods after installing the control stick will significantly add to the difficulty because of working in very tight quarters. This can be totally alleviated by attaching the pushrods now prior to installation while it is so much easier to do so. The rod end bearings or heim joints as they are called are to be installed 9 5/16" from center to center on the fittings. As it turned out, my blue line paper measured that perfectly from the first line to the bottom line. It worked out that each heim joint was screwed in 20 turns to get the measurements correct. 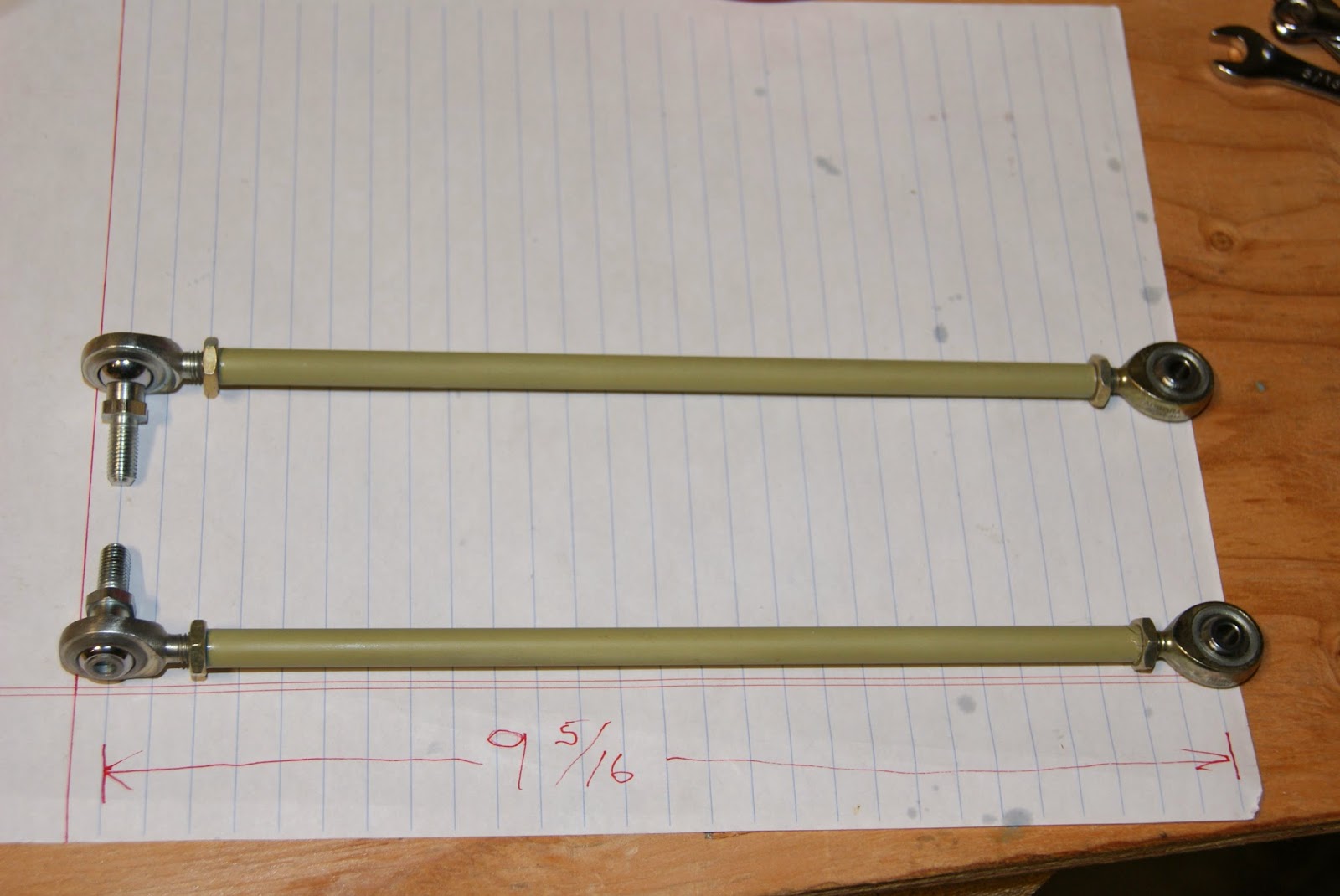 Rod ends attached onto each end of the F-1264 push rods adjusted to a length of 9 5/16" from center to center per the plans.

Although the plans don’t call for it, I placed a little blue Loctite on the last three threads going into the pushrods and also placed some on the lock nuts. Hoping the spacing given in the plans is an exact measurement that will not require tweaking later. 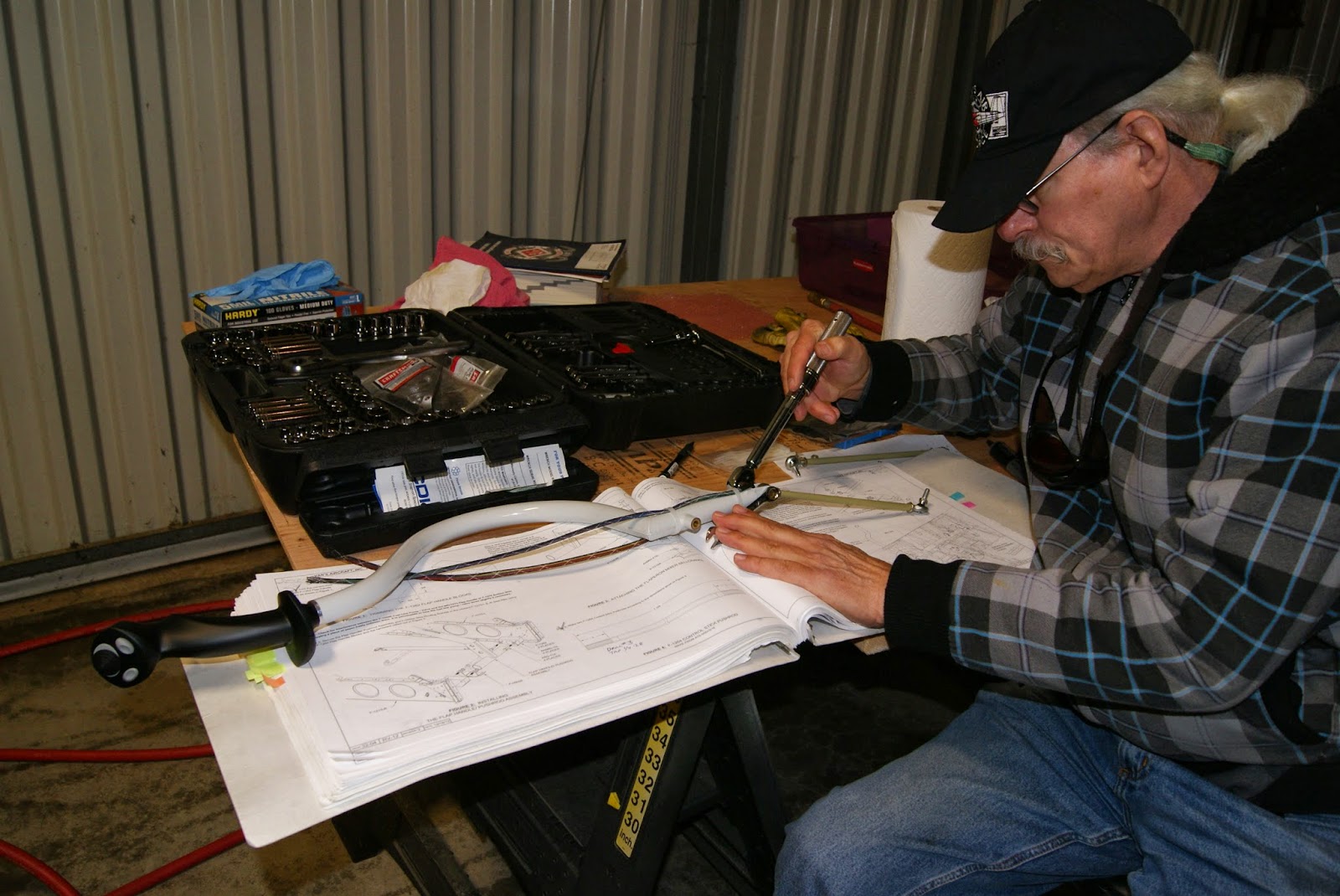 Using a torque wrench to torque the rod end hardware onto the F-1212 control stick. 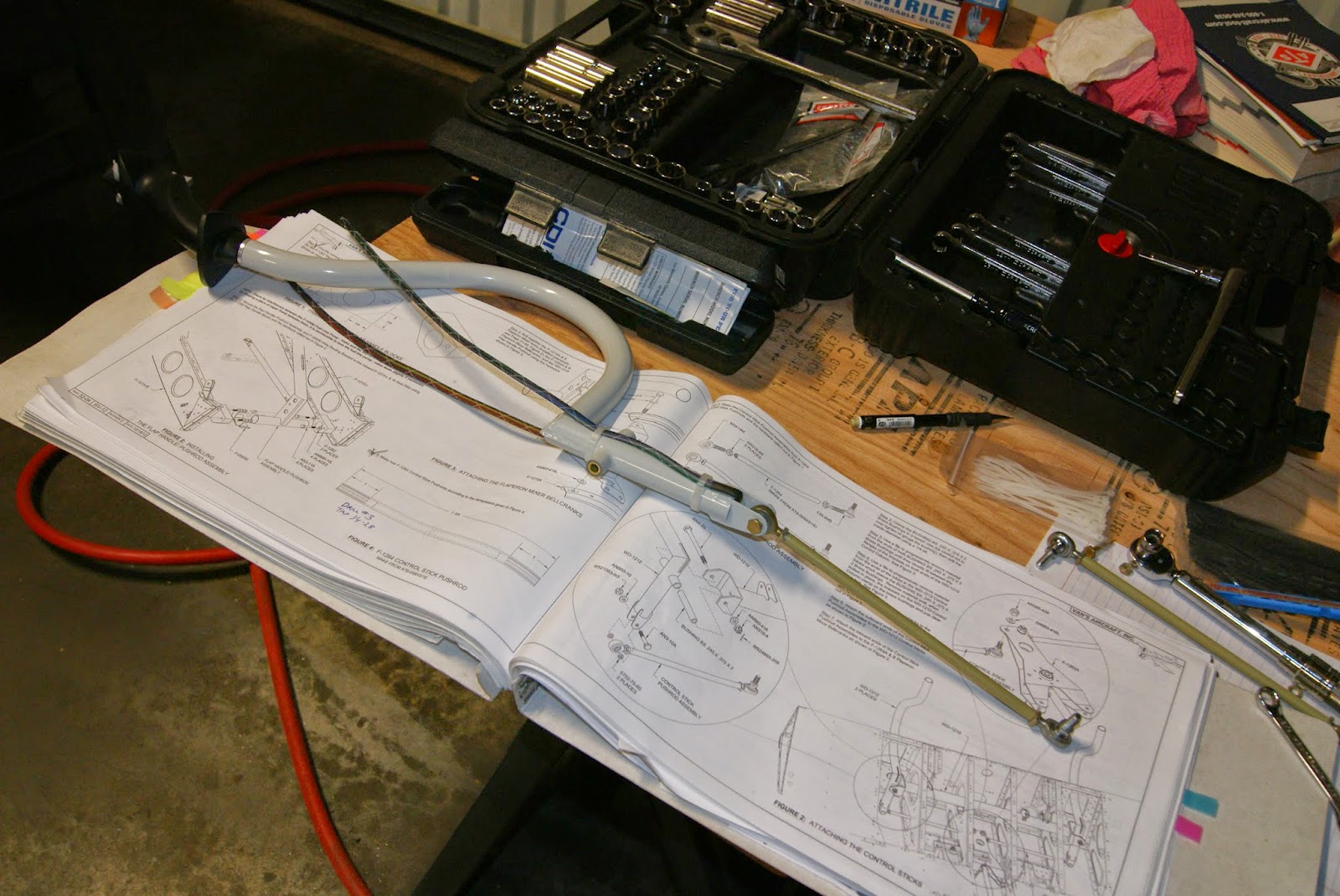 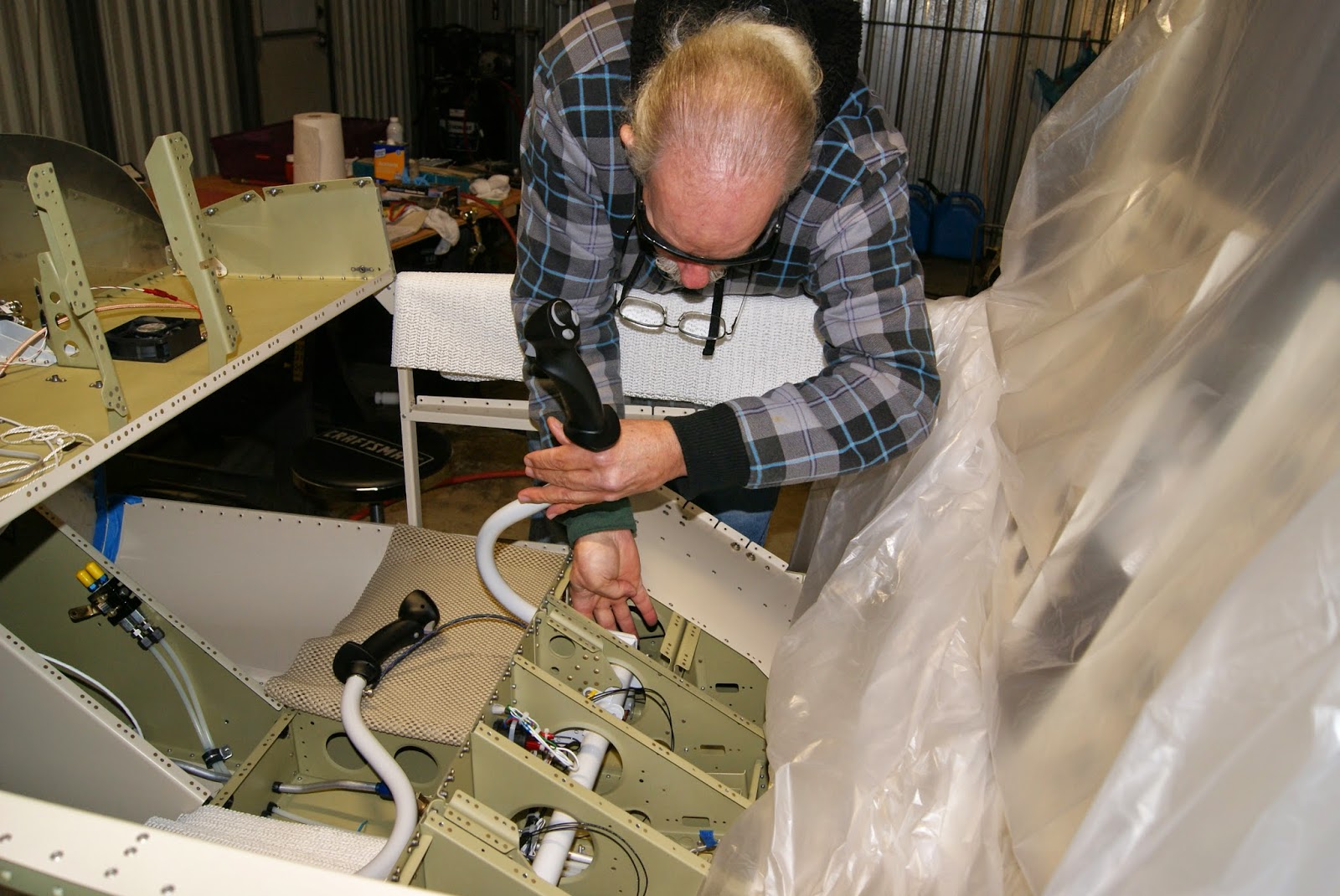 One side down one side to go … I also took the flap handle in for powder coating so hope that that gets finished in the near future because it will be needed very soon to continue on with the instillation of the flight controls.
Posted by John at 9:08 AM