Sometimes to make forward progress it is necessary to take a step or two backwards. As mentioned in an earlier posting the avionics kit brought both joy and heartache … the F-00054-L&R instrument stack angles and F-00055-L&R comm. support brackets being components of the headache.

Van’s wise decision to switch from the Garmin SL40 radio over to the new Garmin GTR200 radio necessitates installing the new mounting brackets. Unfortunately, the previously riveted in place F-00026-L&R instrument stack angle brackets and F-00027-L&R comm. support brackets needed to have their mounting rivets drilled out so they can be removed. A few days back, Bernie offered a helping  hand by supporting the instrument panel with a block of wood in the area of the rivets while the rivet mandrels were pounded out from below … so that was already done. 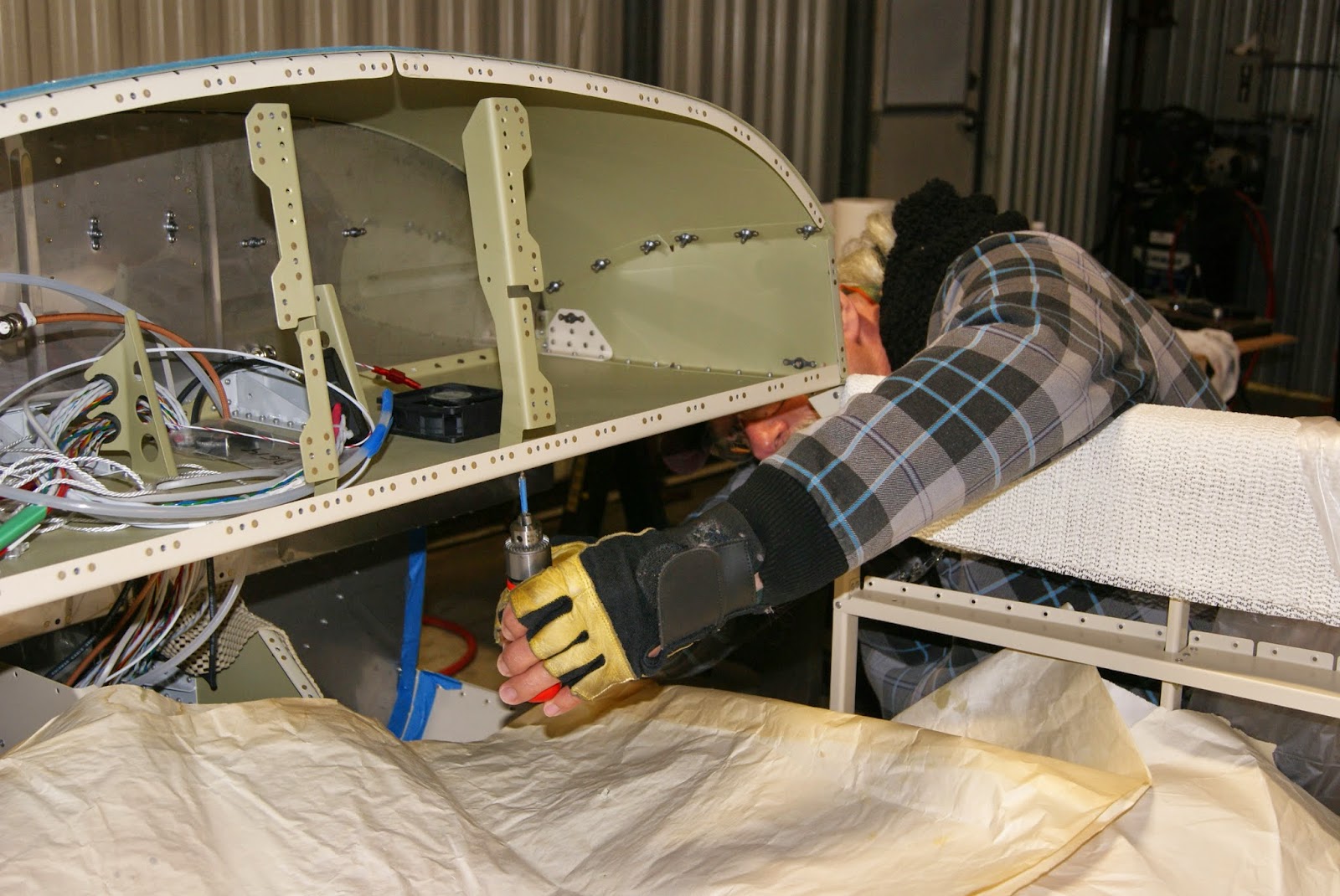 Drilling out the mounting rivets for the F-00026-R instrument stack angle.

Once the F-00026 and F-00027 brackets were removed, the new replacement F-00054-L&R instrument stack angles were prepared for instillation. The instructions have the builder machine countersink all the rivet holes that secure the 7 nutplates that attach onto each of the stack angles. After machine countersinking all the nutplate mounting holes, the nutplates were all tested by running a screw lubed with Boelube through them, then riveted onto the F-00054-L&R instrument stack angles. 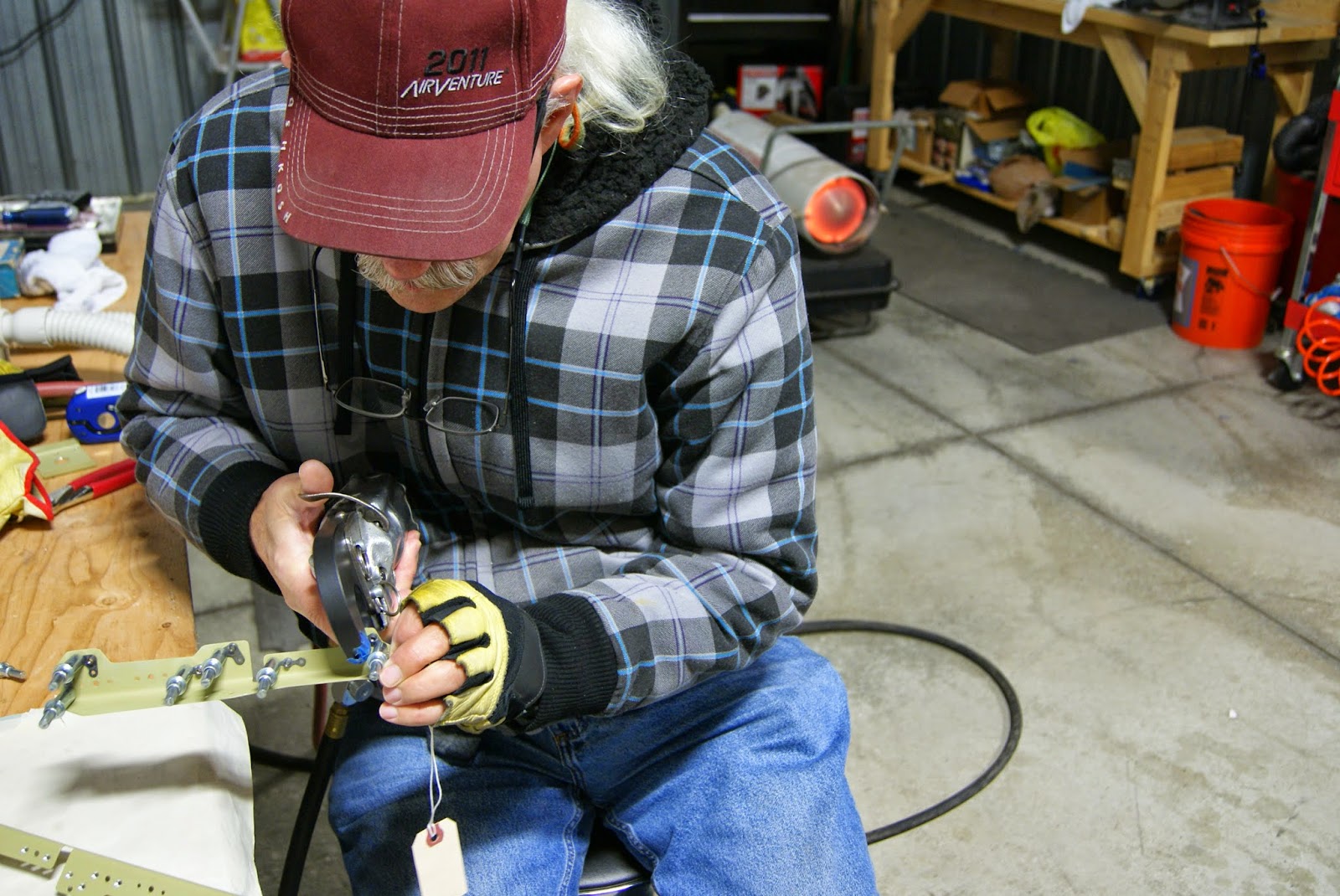 Using the pneumatic squeezer to rivet nutplates onto the F-00054-L instrument stack angle. 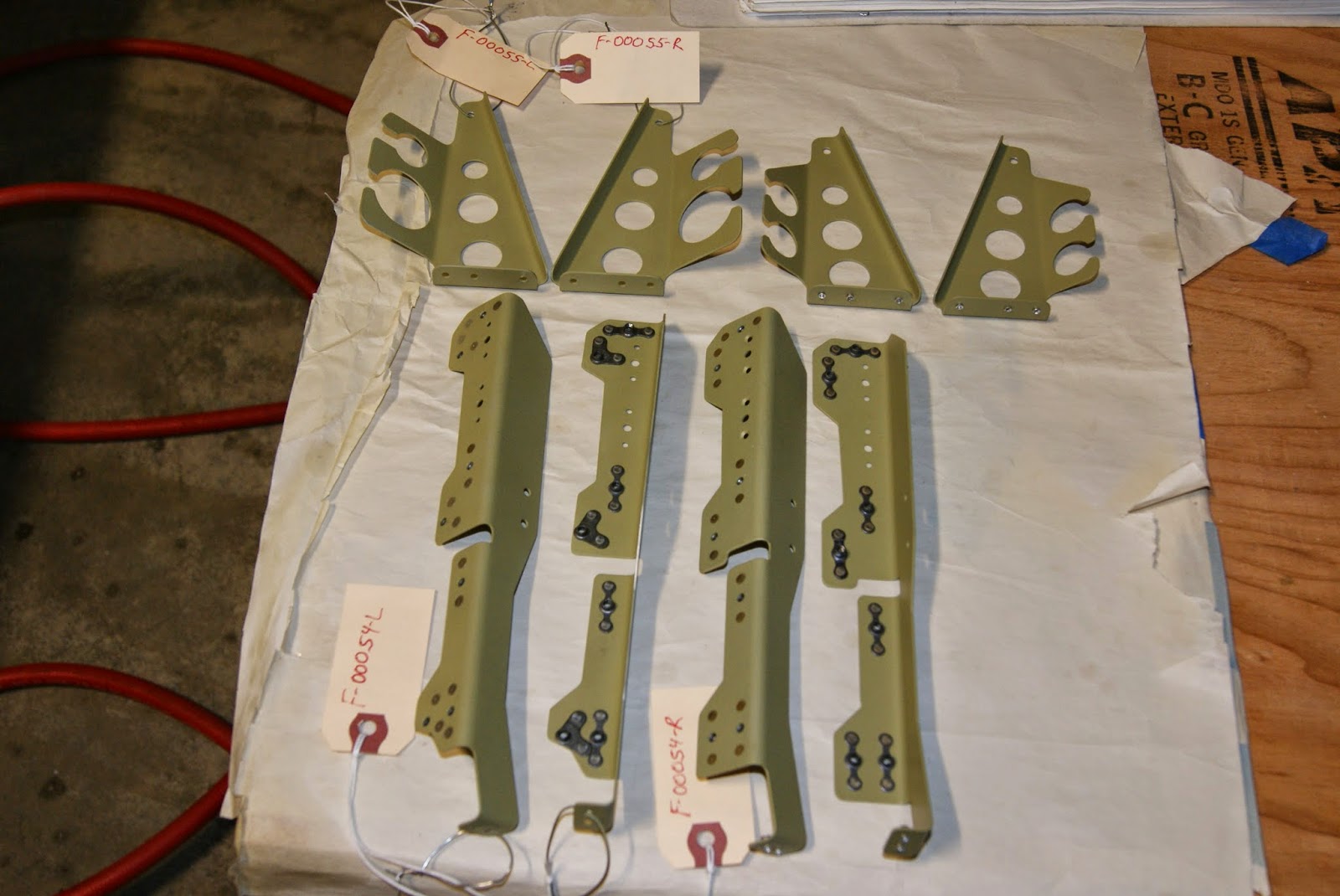 Installing the four new mounting brackets was uneventful … fortunately the rivets were still easy to get to because the side skins are not on yet ... which allowed for easy access. 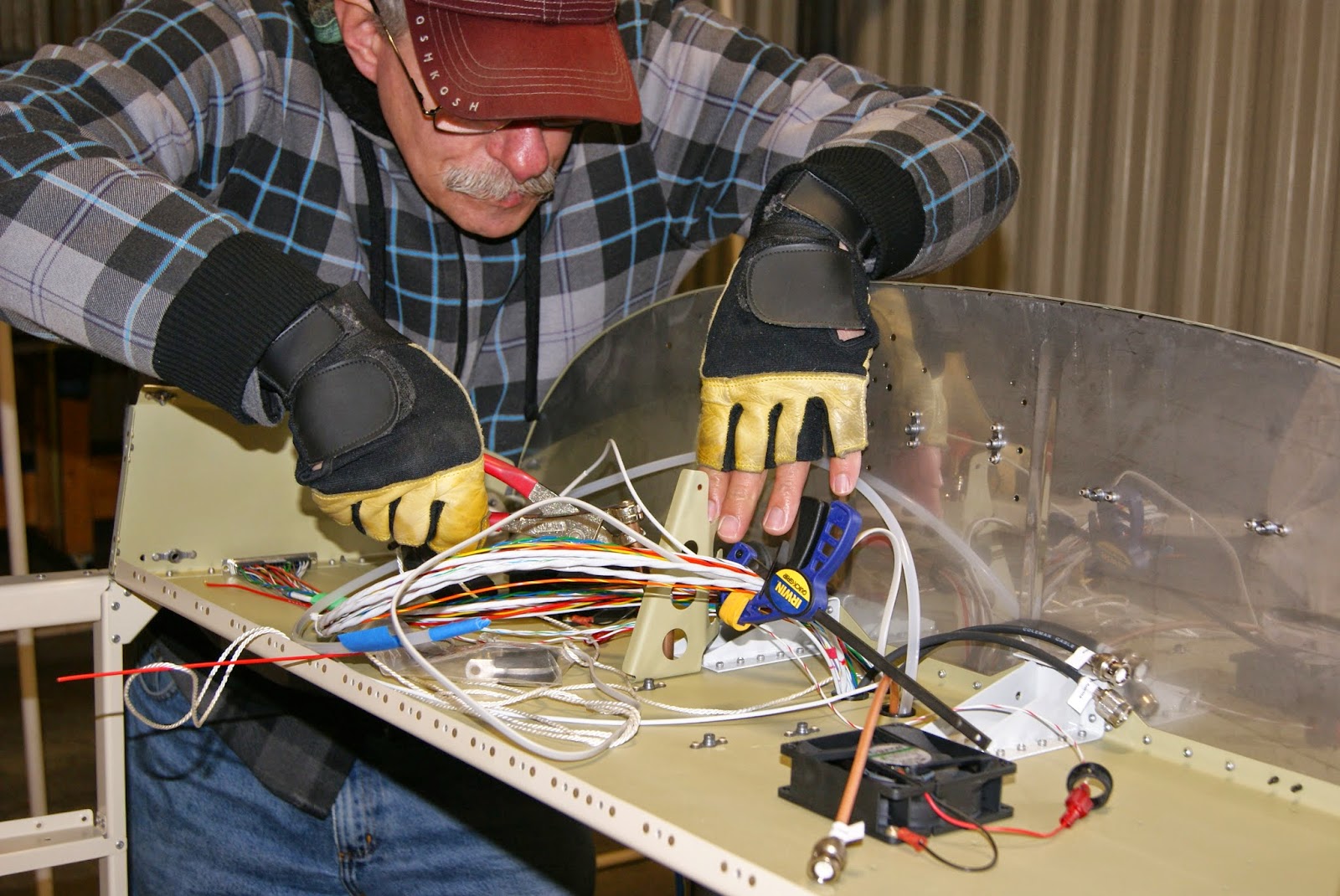 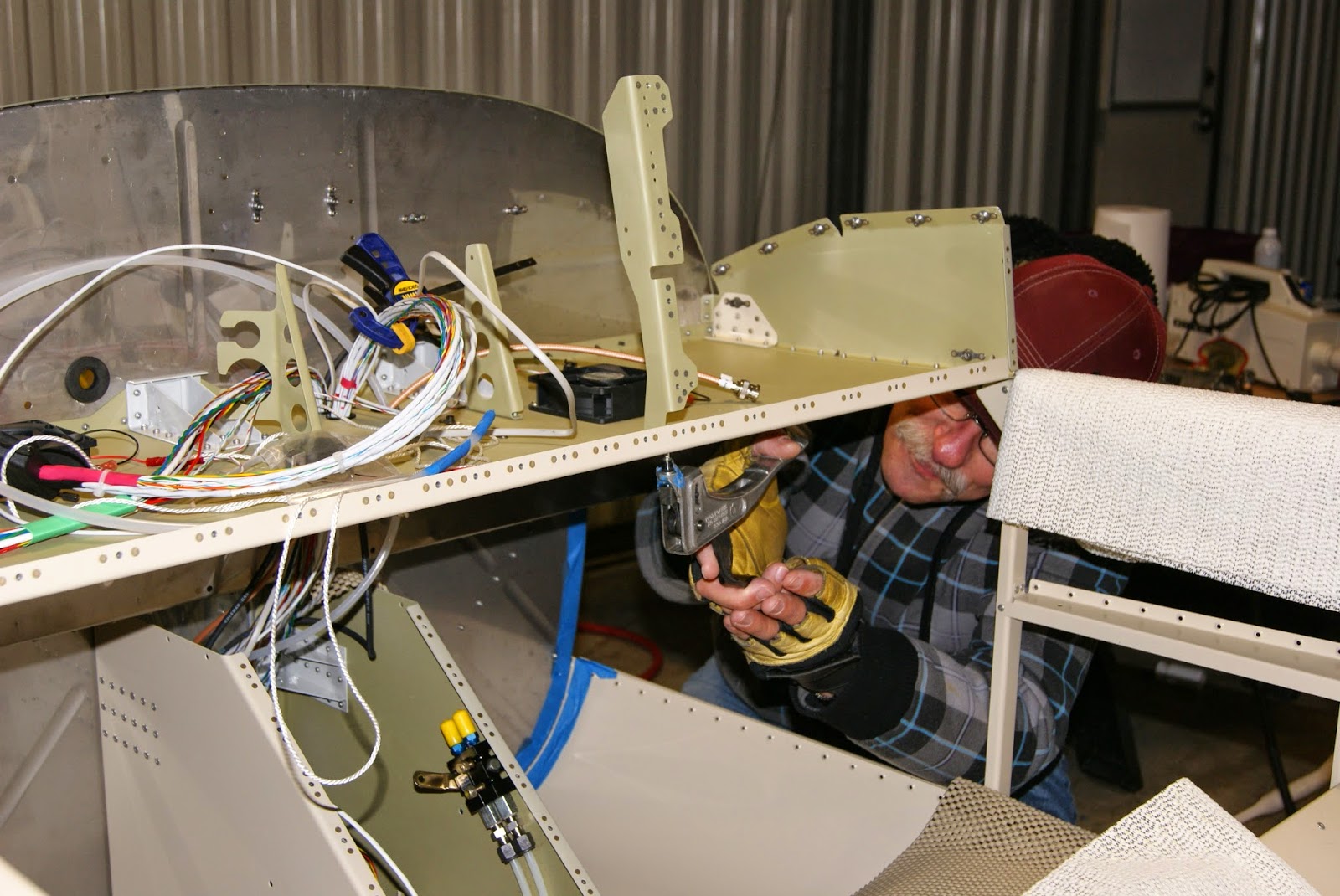 Both F-00055-L&R comm. support brackets in the background are now riveted in place and about to rivet the F-00054 –R instrument stack angles onto the instrument panel base. 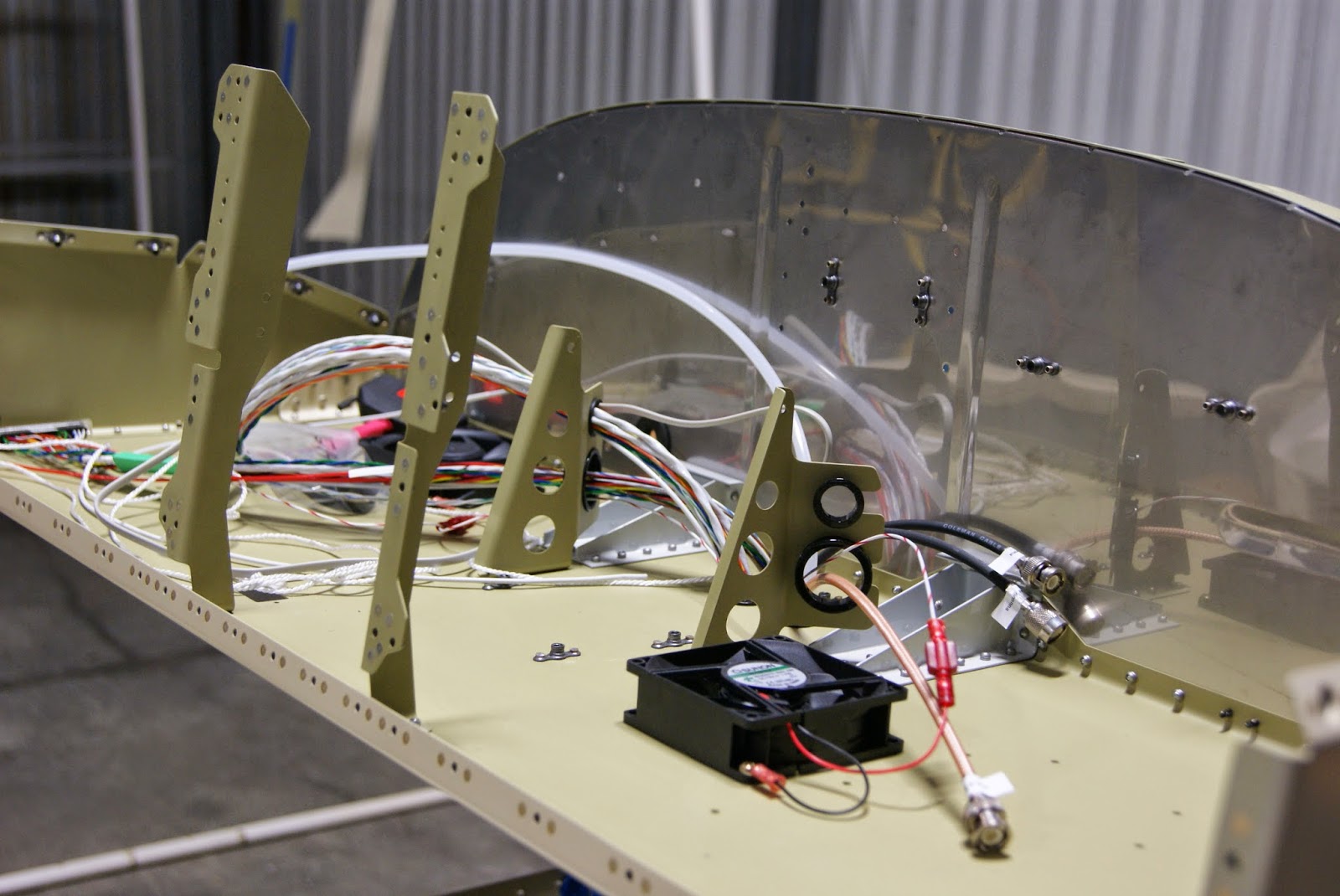 Both pairs of brackets now riveted in place onto the RV-12’s instrument panel base.

Of note … looking closely at the above photo one can see the lower grommet holes in the F-00055-L&R comm. support brackets are huge compared to the previous brackets.

The other small task that was finished as preparation for the ADS-B antenna install in the tail cone was the drilling of three #30 holes in the lower right side of F-1208 fuselage frame. The holes were drilled 1/4" below the flange of the frame per the instructions. These three holes will be used to secure the ADS-B antenna cable onto the F-1208 fuselage frame with wire ties.
Posted by John at 8:15 AM