In preparation for mating the RV-12’s tail cone onto the fuselage, the two units were moved a little closer so the wires for the ADAHRS would be pulled into position enough to allow the wires to be installed into the DB-9 connector that will plug into the back of the Dynon SV-ADAHRS-200 unit. 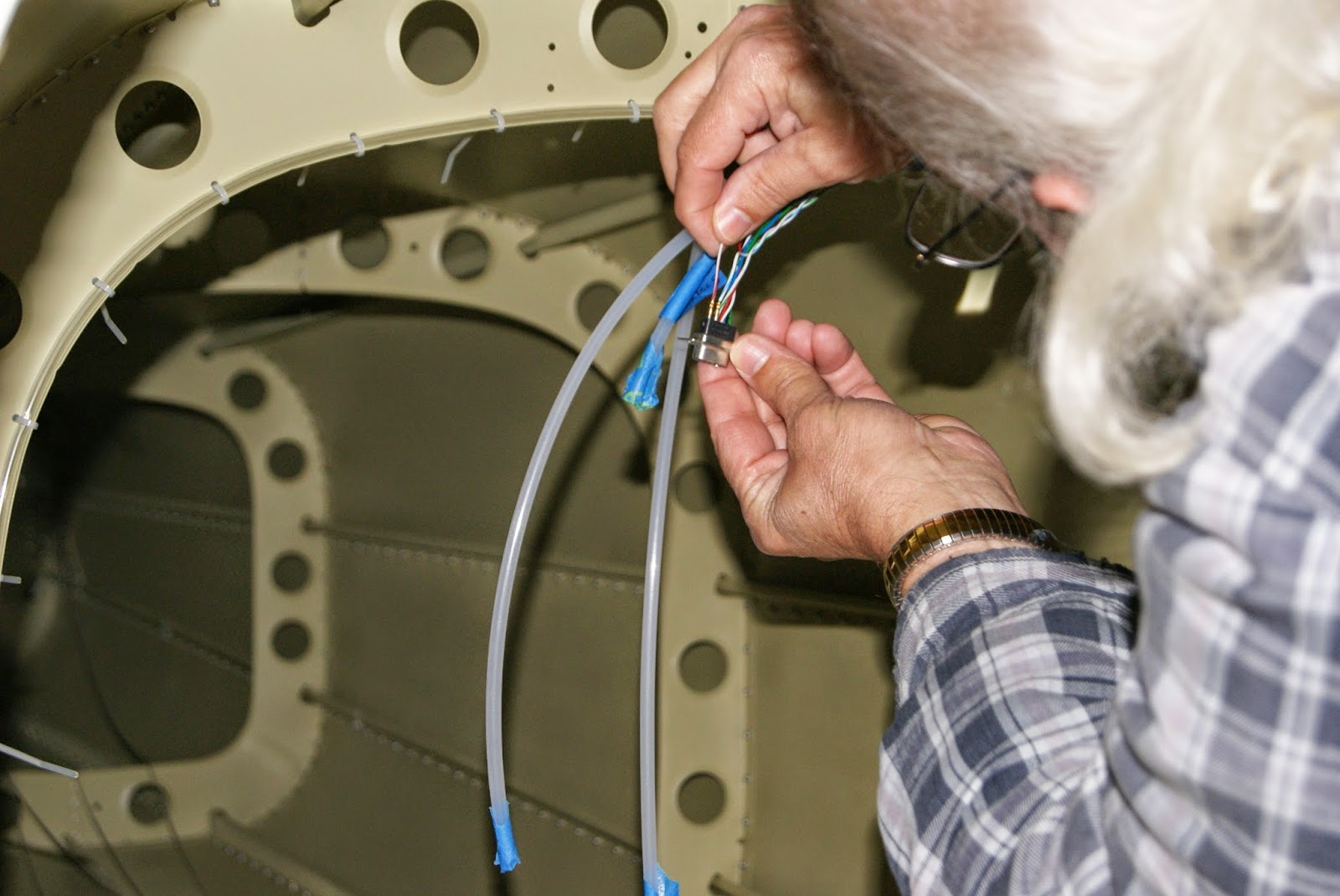 Installing the ADAHRS wires into the DB-9 connector that will attach onto the Dynon SV-ADAHRS-200 unit that gets mounted inside the RV-12’s tail cone.

I was about ready to install the plastic shell halves onto the DB-9 connector when it occurred to me the screws and nuts used for mounting are made of steel.  I’m sure it is not a big deal because there are hundreds of flying RV-12’s that have steel screws securing the plastic connector shell onto the ADAHRS unit … but in keeping with the long honored DOG Aviation tradition of making the easy just a little more difficult, decided to replace the steel mounting hardware with brass components. This will even further reduce the amount of steel in the vicinity of the magnetometer inside the ADAHRS unit … which is a good thing. 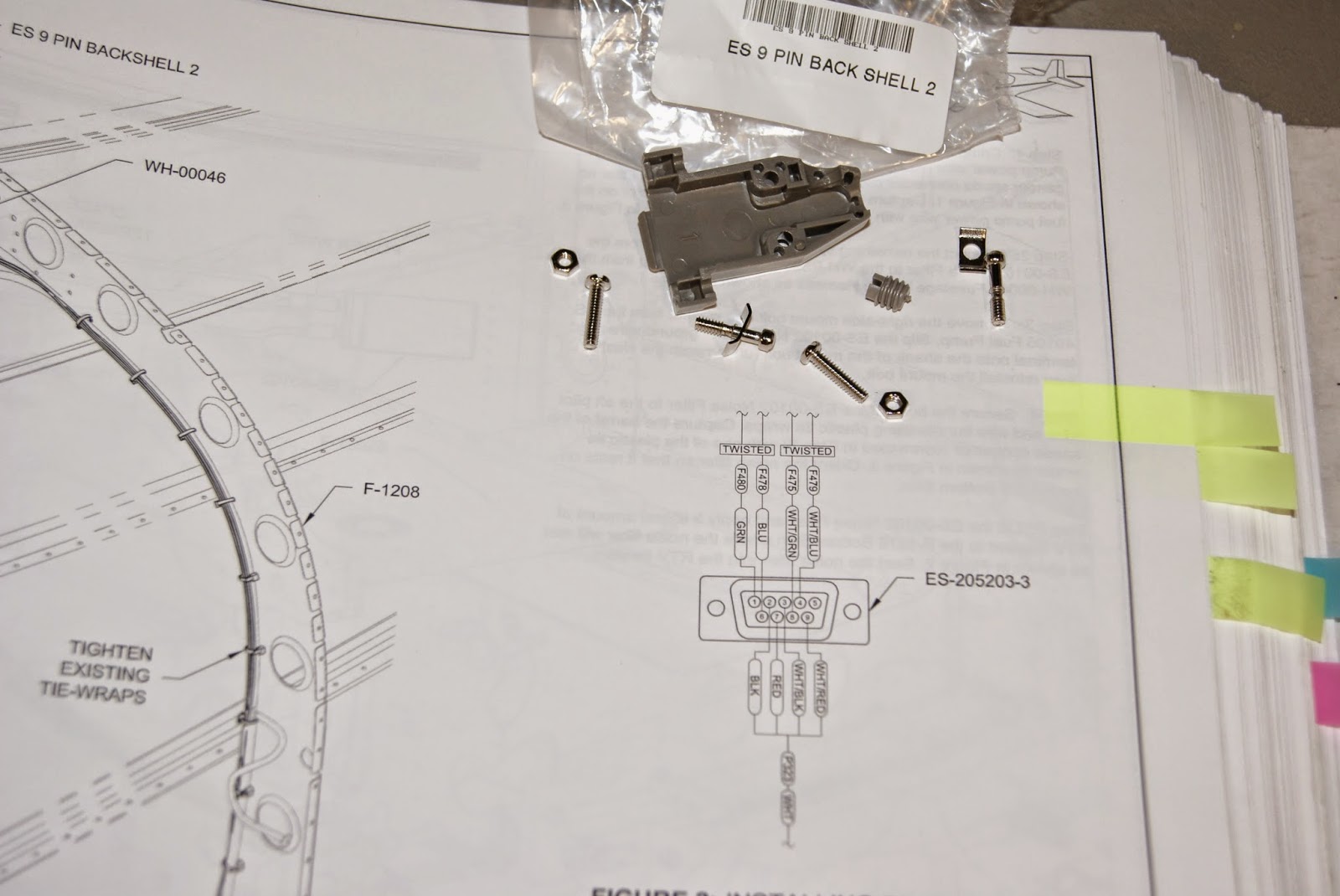 A trip to the local big box aviation supply store was made and four #4-40 1/2" brass screws were purchased that have a head cut for both a straight screwdriver blade and a Philips screwdriver (I feel the Philips will be much easier to use in this application after the ADAHRS is installed … the original screws only have a straight slot). I discovered the heads on the brass screws were a larger diameter so spent a fair amount of time dressing all the screw heads down on the Scotch-Brite wheel. The heads for the two screws that mount the connector to the ADAHRS unit require more material removed than the two screws securing the back shell halves together. Of course, it was quickly discovered the nuts were also larger … so they needed to be dressed down on the Scotch-Brite wheel as well before they would fit into the molded recesses in the back shell halves. 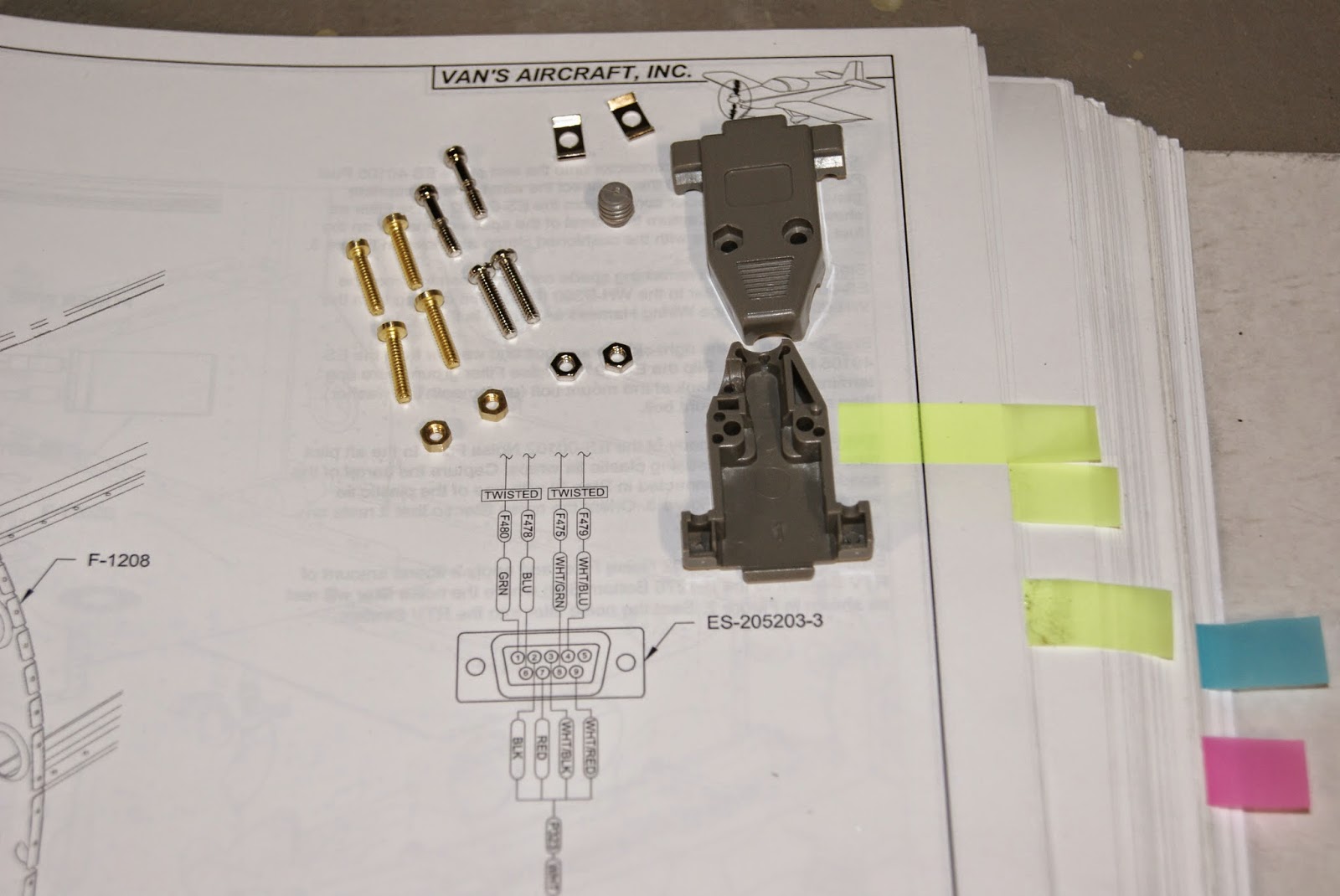 On the left the replacement brass hardware after being dressed down on the Scotch-Brite wheel for a custom fit to the DB9 connector’s plastic back shell … on the right the original supplied hardware. 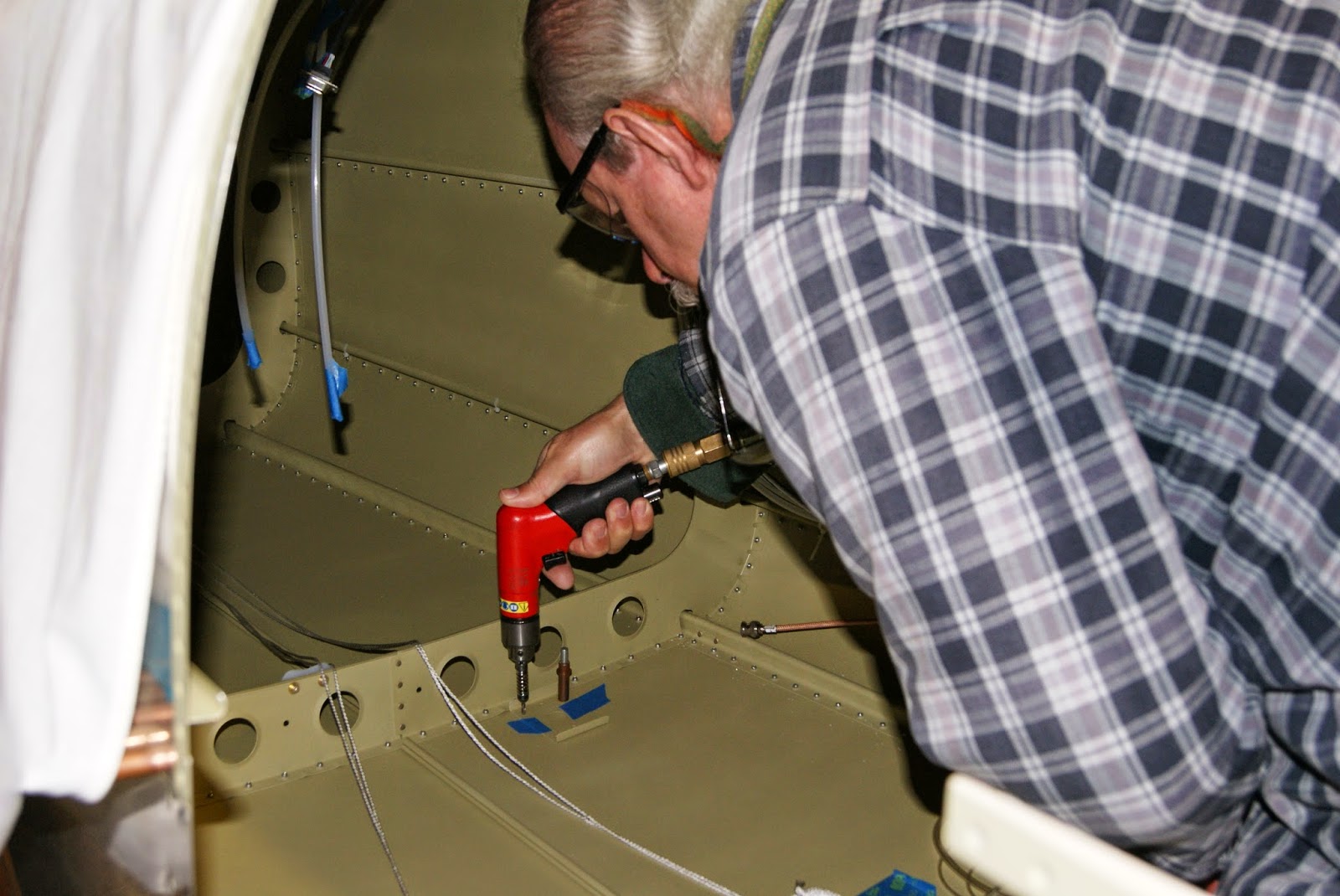 After the four corner holes of the F-00020 antenna doubler were drilled and secured with Clecos, the two screw holes for the antenna mounting were drilled to #12. Next the center of the large hole was determined and the bottom skin was drilled out to 9/16" using a step drill. 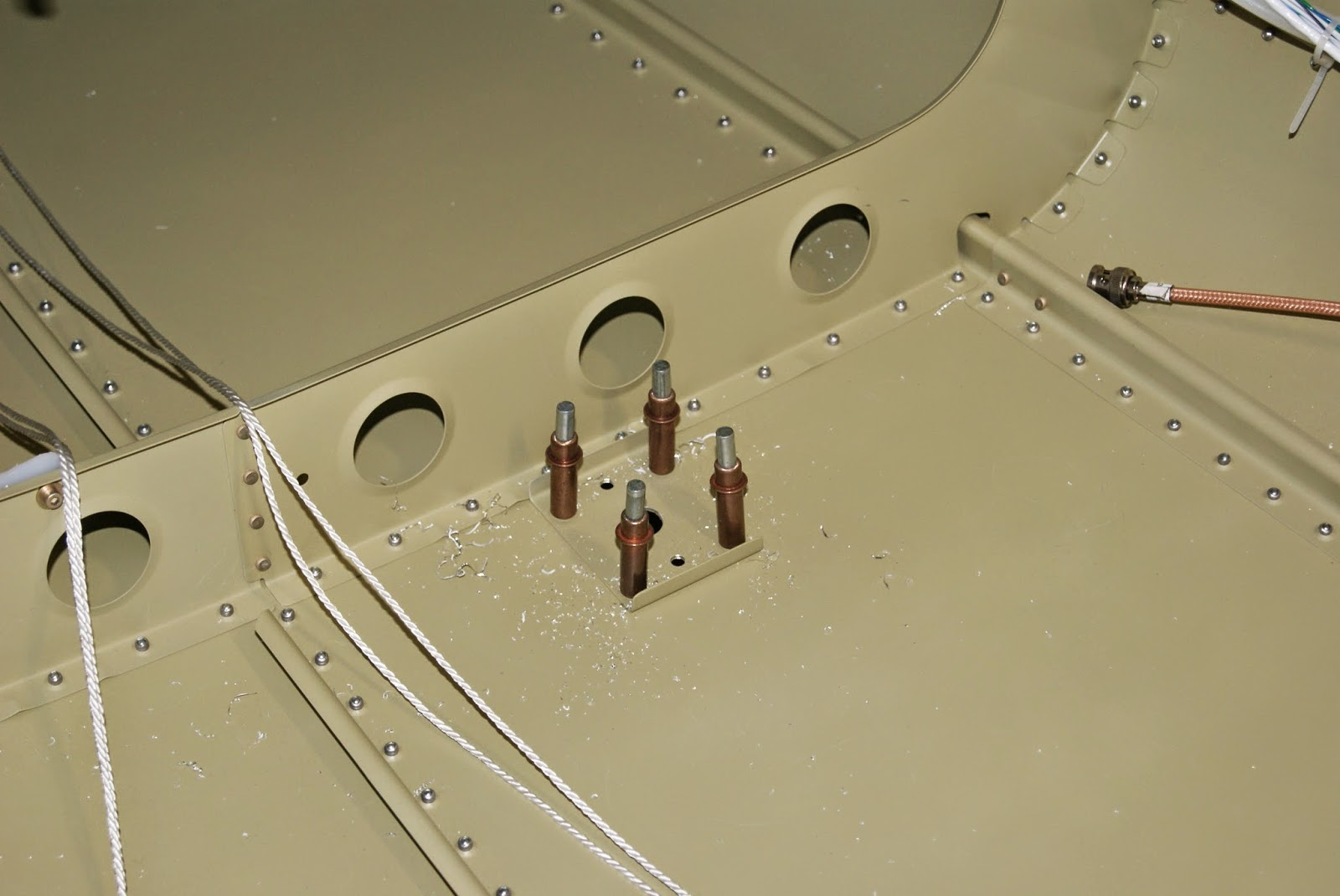 Completed drilling of the F-00020 ADS-B antenna doubler plate to the bottom skin of the RV-12’s tail cone.

After the drilling was completed the parts were disassembled for deburring. Because the DOG Aviation RV-12 project is utilizing flush rivets in the place of LP4-3 rivets, another extra step of dimpling the four corner holes in the F-00020 ADS-B antenna doubler plate is required. So the four rivet holes in the F-00020 doubler were dimpled to 120 degrees using the pneumatic rivet squeezer. In order to dimple the bottom skin of the tail cone, the 120 degree dimple die set that has a hole in the center for a nail to be used with a hand rivet puller was utilized.  Once again, this was a two person job so Bernie fed the nail holding the male die up from the bottom and I slid the female die in place from inside the tail cone and formed the dimples in the tail cone’s bottom skin with the hand rivet puller.

While Bernie was at the hangar thought it best to also get his assistance in the removal of the four brackets in the instrument panel. Frequent readers of the Blog may remember me being a little miffed that the avionics kit contained two new F-00054-L&R instrument stack angles and two F-00055-L&R comm support brackets which will replace the four brackets already riveted onto the instrument panel base. The new brackets support the radio changeover Van’s has made from the Garmin SL40 to the new Garmin GTR200 radio.

A total of 10 rivets need to be removed … but prior to drilling the rivets out, the rivet mandrels need to be driven out. This step was bothering me because I know you have to pound quite hard to drive a mandrel out of a rivet. The idea of pounding on the panel base while unsupported troubled me … so while Bernie was at the hangar, enlisted his services once again to press down with a block of wood along the edge of the rivets while I drove the mandrels up from below using a hammer and scrap mandrel that had been dressed to a rounded point on the Scotch-Brite wheel.

Bernie pressing down with a block of wood while I’m pounding out the rivet’s mandrel from below.

Now that the rivet mandrels have been removed, the rivets securing the brackets can be drilled out at my leisure in the near future. The new replacement parts have already been primed, so will get them changed out soon so I can move on and have one less thing to worry about.
Posted by John at 9:39 AM