RV-12 builders not running a static line to the instrument panel for backup instruments can  ignore this post.  As I was about to install the flap handle assembly, I spotted a potential problem with the extra static line I ran through the center tunnel for the backup instruments.  Van’s is now supplying the F-00050 wire routing bracket which is really a “shoe” that presses down on the wires, preventing them from chafing on the moving flap handle assembly. If the static line were run down and under the F-00050 bracket it would require making a radical downward bend right at the center channel bulkhead grommet … which, I fear, over time may pinch off the static tube. I placed the flap handle block assembly with the F-00050 routing bracket attached in the general vicinity of where it will be permanently mounted to get a visual. 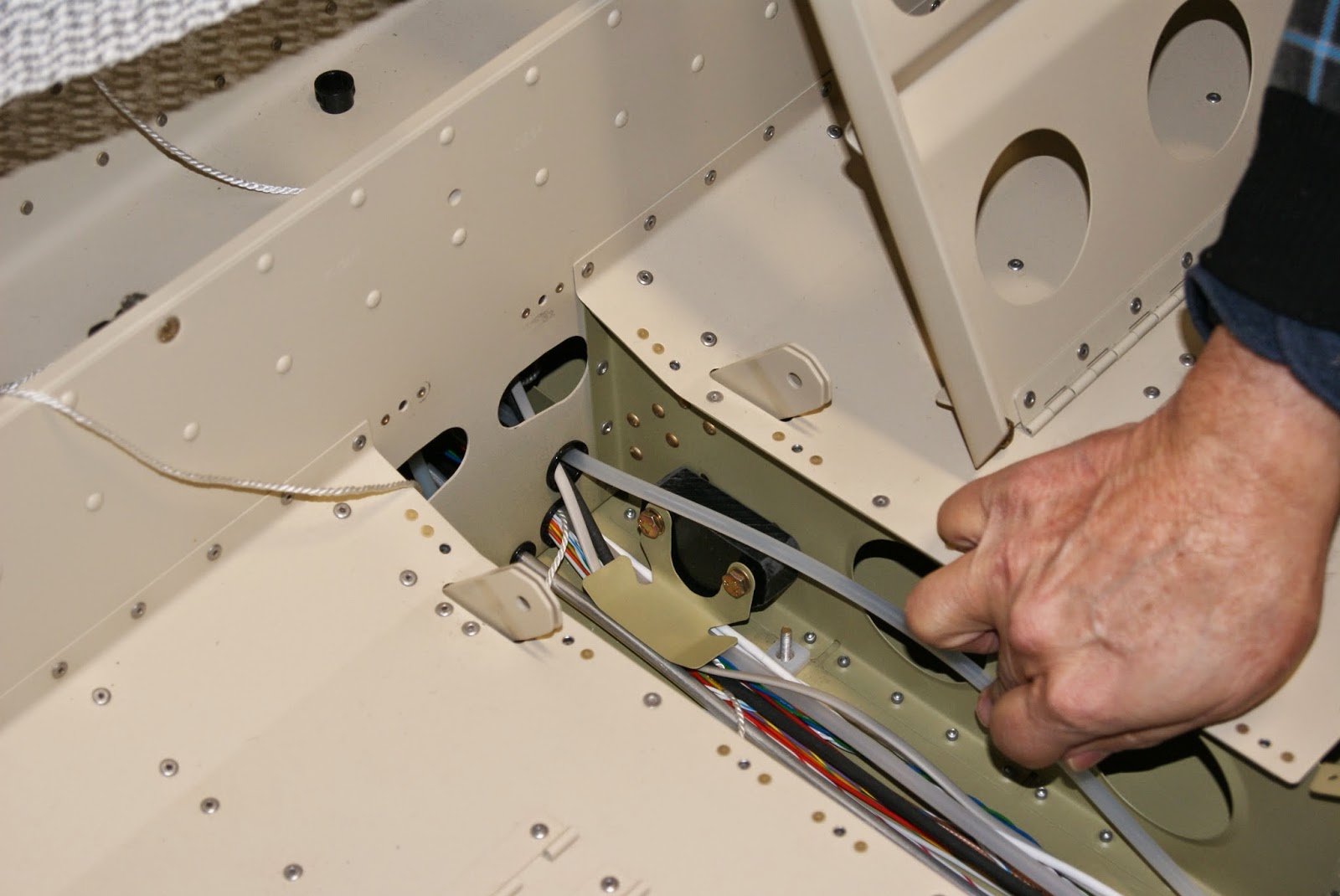 One can easily see the static line in my hand would need to take a radical downward bend at the grommet to squeeze under the F-00050 wire routing bracket.

Holding the static line in my hand gave me an idea. I did receive one extra F-00050 bracket … one came in the finishing kit when I ordered the ADSB option, the other another bracket came with the avionics kit. The idea is to repurpose the extra F-00050 bracket and use it to keep the static line on top of the  black flap handle block … so I searched for hours and finally found the spare F-00050 bracket. (One of the bad things about packing up everything and moving the RV-12 project to the airport is remembering where things were salted away for the move). 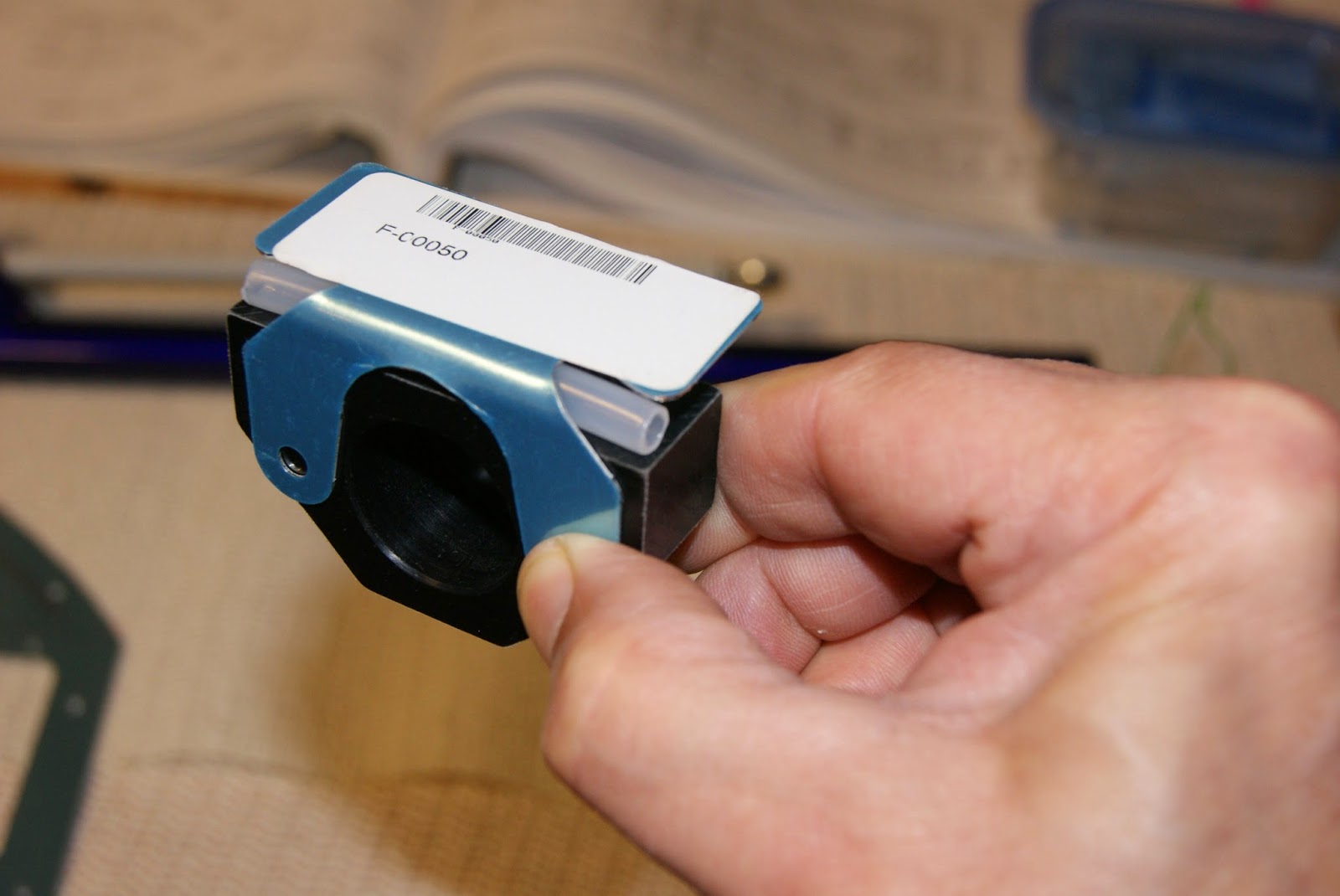 Looks like the spare F-00050 bracket will do a good job keeping the static line out of harms way. 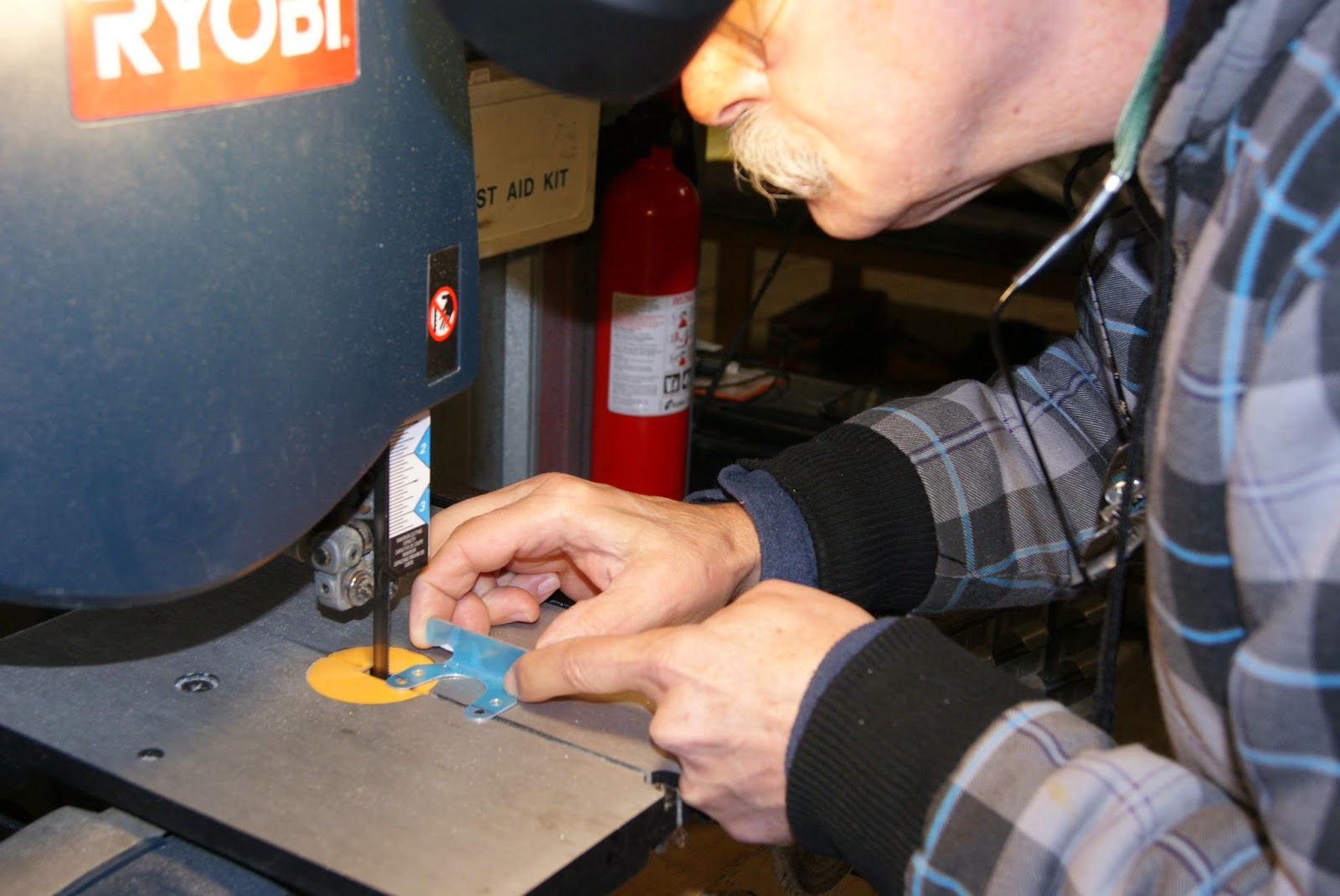 The band saw was used to remove the old mounting holes and also remove some material from the shoe as well. 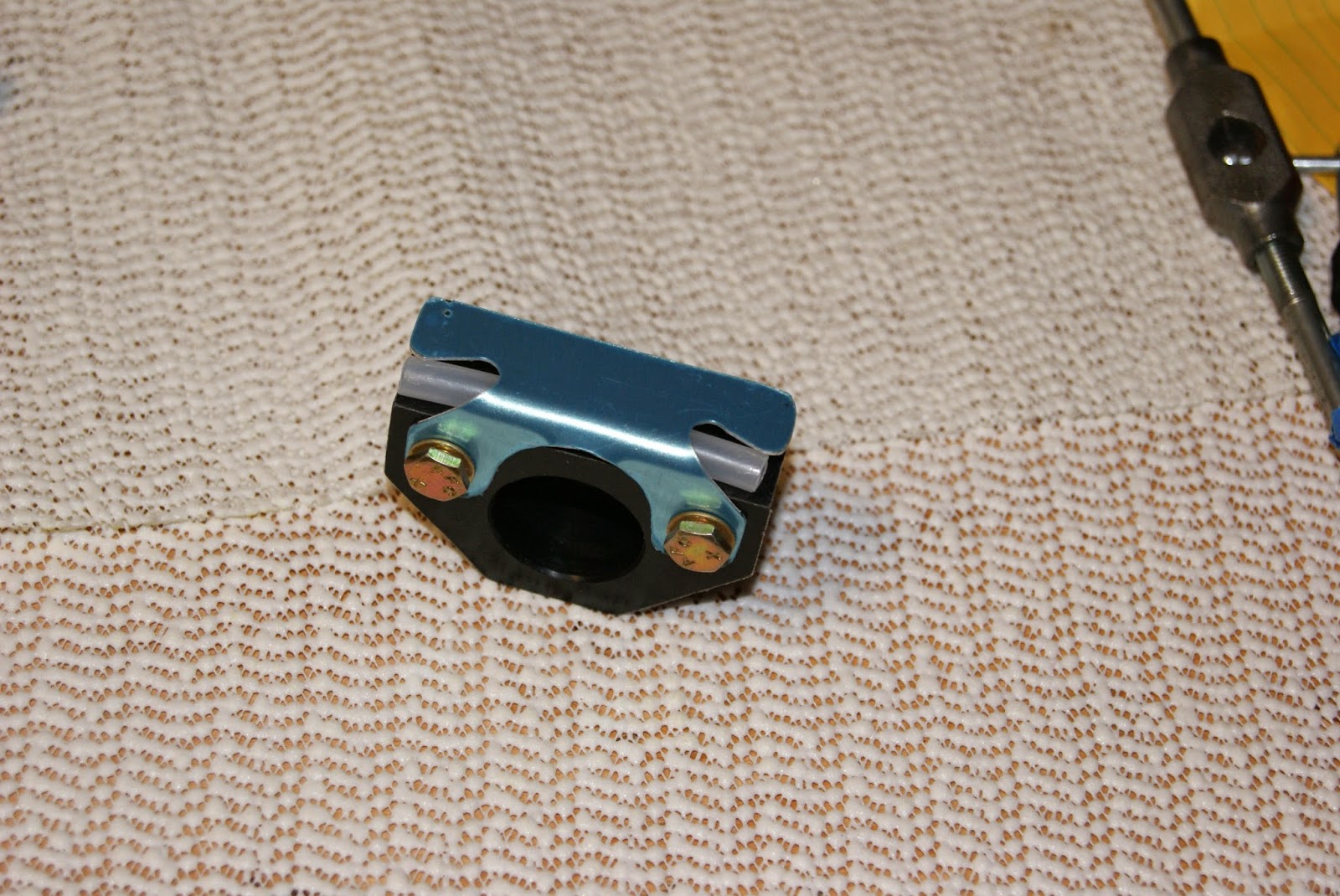 Finished modification of the spare F-00050 bracket to hold the extra static line.

The following photo shows what the finished assembly will accomplish … the parts are not bolted, they are just sitting in the general area they will reside (actually needs to be more aft). Feel the modified F-00050 bracket for the static line turned out great and should work quite well. 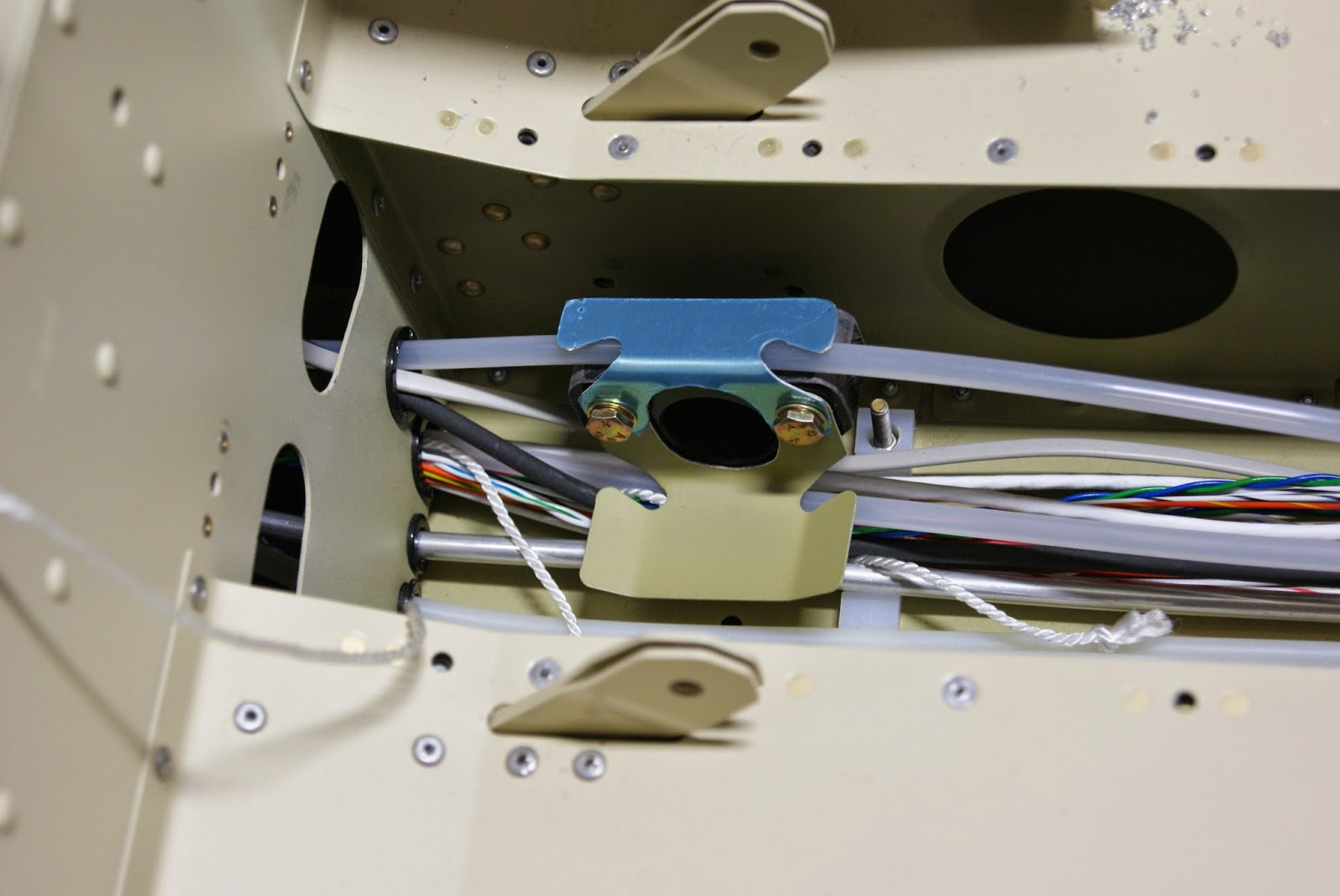 The left flap handle block with both F-00050 brackets attached. With this setup the static line will not need to make a radical bend to get under the “shoe”.
Posted by John at 5:50 AM