The lengths of the cables for both the throttle and choke are much longer than necessary and they require being cut shorter. Typically this would involve cutting the excess with a pair of cable cutters or side cutters only to discover that over time the cables begin to unwind and fray. There is a solution to this that everyone may find useful not only for aircraft but on bicycles as well … it is called cable welding.


The Experimental Aircraft Association has a plethora of how to videos and one in particular caught my eye is on cable end treatment … or as some refer to it, cable welding. Basically the process is quite simple … chuck up the cable into a variable speed drill …. while holding the cable with a pair of pliers use a propane or MAPP gas torch to heat up the cable in the area where you want it cut until it begins glowing cherry red …. then slowly spin the drill in the direction the cable is wound (approximately one revolution per second) while placing a little back pressure on the drill … after a handful of turns the cable will break leaving a tightly twisted and fused together end that will not unravel.


Here is a link to the EAA video on the topic that I know other builders will want to view and anybody that owns a bicycle.


Mike came by the hangar with his MAPP gas torch and we used it to cut and fuse the cables together following the steps in the video. The results were perfectly cut cables that will not unravel … got to love it.  I do plan on placing some primer on the ends of the cables before placing them back on the carburetors so they don’t rust. Because we had our hands full, did not take photos of actually performing the process ... but if one watches the video you will know what we did because we did not deviate from the process used in the video. 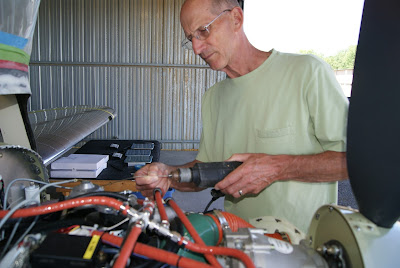 Mike chucking up one of the ends of the cable in a variable speed drill.


While Mike manned the torch keeping it aimed away from the engine, I held the cable with pliers a little below where we wanted the cut … when the cable began to glow brightly, I began slowly spinning the drill while pulling gently on the cable at the same time. The first cable was spun a little too slowly and is not as perfect of an end as all the rest. The rest of the cables were done spinning the drill a little faster … about one revolution per second seemed to yield a great result as can be seen below. 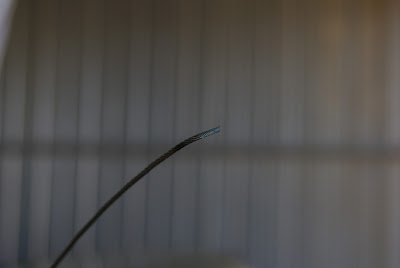 The end of the cable after performing the cable treatment shown in the EAA video. 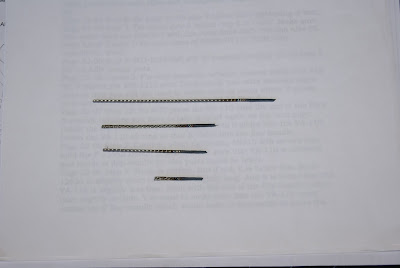 Here are the four ends of the cable that were the excess we removed.